It’s ironic that at its Keynote last week, Apple chose to use DJ software (Algoriddim’s excellent djay Pro) to demo the computer’s new MacBook Pro Touch Bar, seeing as DJs appear to be abandoning Apple’s flagship music program, iTunes, in droves, and fewer new DJs are using it than ever.

What was once the go-to app for organising DJ music libraries is now, frankly, a mess, and judging by what our readers are telling us, they’re voting with their feet. Indeed, for the first time ever, we are now – after a lot of deliberation – advising new DJs, or those not particularly committed to it, not to use iTunes at all. Why? Let’s take a look.

Why DJs originally flocked to iTunes

DJ program makers saw their cue, and built iTunes library viewing into their software. You could download, organise, and prepare your music in iTunes, and open your DJ software to see all your hard work waiting for you. No matter what software you used, it was all there. You could put your DJ playlists in your iPod too, and use them across multiple DJ programs if you liked.

Because iTunes established itself among DJs so universally, over the years we’ve found ways around its changes, foibles and stumbles. But lately, iTunes has become less and less attractive. Bringing us to today…

Why you should consider stopping using iTunes for your DJ music

So is iTunes dead?

To be clear, we still like iTunes in a consumer setting (although we feel Apple should really split apart its various functions, just as it has in iOS), and indeed, we use it for Apple Music quite happily – we just don’t think DJs who aren’t committed to it should start using it any more. At best, it’s become an either/or (ie use it for your DJ music, or everything else – but not both). This is a problem for those who are encouraged to use it by Apple’s systems to do so much more than manage a local music library.

Put it this way: If we’d never seen iTunes, and it appeared now as it is today, would we rush to use it to organise our music? I think not. Yeah, it is “there” in DJ software – always its biggest pull for DJs – but even the manufacturers are turning against it (for example, “when using Serato DJ, third-party programs such as iTunes are not the best and most reliable way to organize your Library” – not my words, but those of the official Serato iTunes documentation).

We’ve all been living with its increasingly severe compromises for too long. Even as a legacy system it’s struggling, but as a way of working for people just starting in DJing? Not in a million years. And that’s why we no longer recommend it, at least in the majority of cases, to beginners. The library systems in (most) DJ software are getting much better, and meanwhile, iTunes is getting sadly worse. For the advanced DJ/pro, or the DJ that’s used it for a while and enjoys the things it’s still best at (smart playlists being one of them), sure it’s still fine – and indeed currently we do still recommend its use among that subsection of digital DJs.

So what should you do instead?

So for the sake of walking the walk with our beginner majority audience, I’ve been living without iTunes recently. Right now, my best recommendation is to keep your DJ music in a folder, called, say, “DJ Music”. You can use your DJ software’s built-in library features for editing tags, adding artwork and so on, or use a specialist ID3 editor instead. You’d then do all your playlisting within your DJ software itself, possible using something like Rekordbuddy to move that info from DJ program to DJ program, either for redundancy’s sake or just to keep your options open for DJing.

You lose the ability to easily play your DJ music across your Apple devices, but if you choose to use a service like Dropbox, for instance, you can still keep your music in sync across devices. There are Dropbox music players for all mobile devices. That also takes care of your backups.

(Not convinced? See how other real DJs do it here: Five Steps To Your Perfect DJ Music Library System.)

No music preparation or organisation system has ever been perfect, and this one would mean you’re only running your DJ software on one computer, with the Dropbox “cloud” element really being a “read only” copy of your music. It will also work better if you keep a nice, simple file naming convention as Dropbox lists tracks by filename, just as your Finder or Windows Explorer does.

The exact way you choose to move forward will depend on your devices, library size, software and preferences. But in our view, you should think twice about using iTunes as be part of that, at least if you’re new to all of this. If you’re still happy with it, are prepared to put the extra time in to set it up, prepared avoid cloud features / streaming, and think it’ll still be here in a few years’ time, we’re not here to tell you you’re wrong, but at the same time, we can’t see things ever improving from the gradual decline we’ve endured over the past half decade.

So what about that keynote, then?

Here’s an interesting footnote. Music is going all-out streaming, I think we can all see that. Apple and Algoriddim (the makers of the djay Pro software featured in the keynote) have tight iTunes-DJ software integration already, tighter than anyone else.

If those guys can agree to make Apple Music subscription files available directly in djay Pro, then Mac users at least will have a rock solid DJ platform that taps directly into Apple Music, which will be a pretty compelling offering for lots of DJs, and could be the catalyst that moves mainstream DJing from local music to streaming, especially if it allows offline “locker”-type access so there’s no need for internet when actually DJing, and jumps through the licensing hurdles.

We have no word if this is coming, but if it does, it’ll be big.

So, have you abandoned iTunes like we have? Did you never use it in the first place? Or are you still using it, completely happy with it, and wondering what the fuss is all about? Please share your thoughts in the comments… 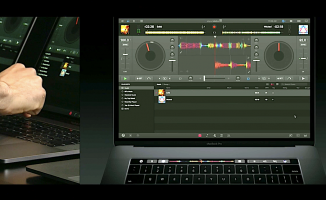 Friday Roundup: How DJs Might Use The New MacBook Touch Bar 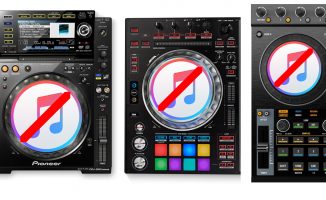