It was while working with another DJ at a friend’s wedding that the whole silent disco thing started for me. My DJ pal was involved with a local festival that had been around for about five years, and the promoters tried the first year to put on a dance tent, but this was stopped due to noise complaints. They wanted to carry on with something other than bands late at night, which is where the silent disco idea came from.

My friend and I decided to give it a go as I’d heard of the concept before, and I’m always wanting to push myself to new experiences. This was about as far removed from what I usually do as I could imagine – I felt I had to give it a try.

What is a silent disco?

For the uninitiated, a silent disco is where each person in the crowd is given a pair of headphones on entry. There are no speakers at all (so no external noise). There are two channels, A and B, on the headphones, and these correspond to two DJs on the stage, battling with each other to keep people listening to their channel.

The DJs can only hear the music via their own set of headphones, although they also have access to a second pair that carries the same thing the crowd hears (so the DJs can hear what their music sounds like “out there”).

If you walk into the room without headphones on yourself, it all appears really strange, because you see people dancing and singing but there’s no music at all – hence the term “silent disco”.

Before the gig I was probably the most nervous I’ve ever been as I had no idea what would work, how to mix properly technically on such a set-up, or the energy of the crowd. But as soon as we went on, after the first couple of songs, all my previous experience of playing to different types of crowds kicked in and it was brilliant.

I thought it’d be good to share five things I learned, so that if you’re reading this and want (or have been asked) to play a silent disco, you can hit the ground running. So here they are:

Have the “crowd headphone” on your ear that usually hears the club system, and your cued up tune on your DJ headphones on the other ear. You can actually mix really well like this. You may look silly with two sets of cans on, but hey, it’s all good fun.)

If you get a chance to do this kind of thing, definitely forget your ego and have fun. Release the inner wedding DJ and you will love it! I played everything from The Prodigy to Tom Jones and Queen and got a great reaction. It’s amazing to take off the headphones and hear the crowd sing, I felt a better connection to the dancefloor than at most club gigs I’ve played.

• Dean started DJing bars and the occasional club around his home town of Nottingham, England, nearly 20 years ago, before moving near to Manchester, where his silent disco escapade happened. His SoundCloud is here.

Have you even DJed a silent disco? Have you ever been to to one? Got any experiences or tips you’d like to share? Feel free to do so in the comments… 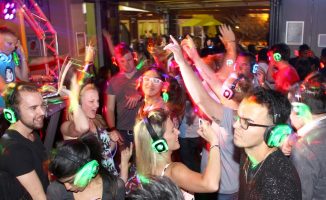 Your Questions: How Do I Mix At A Silent Disco? 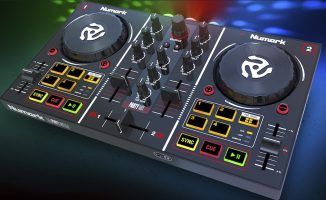 Your Questions: What Should I Play At A School Disco? 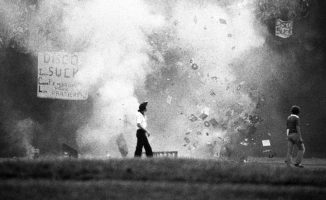 Friday Five: How The "Death" Of Disco Created House Music