Ahead of NAMM 2017, Gemini today announced the MAS-1 controller, the company’s first Midi controller that’s targeted towards users of clip-based performance software like Ableton Live. It marks somewhat of a departure for Gemini, but maintains the company’s focus on DJs as it is designed specifically for a DJ’s workflow.

“Traditional control solutions for software like Live have been primarily clip based button arrays, and we feel there’s an opportunity to not only showcase another aspect of [Ableton Live], but to also appeal directly to DJs that may want to experiment with programs like Live while maintaining a more DJ-centric workflow. The MAS-1 allows users new to Live to maintain the feel of traditional DJing.” says the company.

The MAS-1 combines the feel of a four-channel DJ mixer with control elements for devices and effects contained in Live. It also offers an expanded BPM section to allow for smoother mixing into external sources. Full looping control is offered, including in, out, and active buttons and loop length knob.

“Clip and Scene control is accomplished via a small array of RGB buttons and knobs, or an external controller can be easily added. Mixing is accomplished via 100mm faders for the smoothest possible response. Each mixer channel has three sends for hands-on effects flexibility.” says Gemini.

There is an onboard four-channel audio interface, and Gemini says the hardware itself is designed to work well in the dark, with high contrast highlights and backlit buttons.

Intriguingly, the MAS-1 has a built-in stand, allowing it to be tilted towards the user in multiple positions, although it remains to be seen how sturdy it is – looks a bit flimsy to us, but we’ll report back once we get a look at it in the show tomorrow.

So, something a little different from Gemini. Do you like it? Is there a gap for this kind of performance controller for Ableton DJs? Let us know your thoughts in the comments… 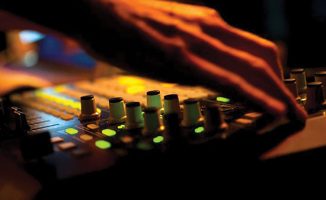