Algoriddim has just announced a major streamlining and repositioning of its DJ and video DJ app offerings on iOS. New app “djay For iOS” unifies all previous Algoriddim iOS software, with basic features available for free, and more advanced features available under a monthly subscription.

Free app users get the basics, including access to Spotify streaming and the software’s automix functions, while advanced and professional DJs can choose to upgrade to “djay Pro” for a US$4.99 monthly subscription.

The subscription djay Pro version gives access to the video functions, as well as a new Looper & Sequencer feature for launching audio and video clips in sync with any music playing on djay’s decks, for live remixing and improvisation.

It also features the ability to plug in and map any Midi controller via Midi Learn, offers access to the single-deck preparation screen, and includes Ableton Link for syncing with other Link-enabled apps, and more.

Users of the latest USB-C iPad Pro can plug in external displays and controllers to djay Pro, to create custom and powerful iOS multimedia gigging set-ups.

So what is djay, and why the change?

Sometimes forgotten behind the bigger names, Algoriddim’s djay platform started on iOS but is now available in various guises across iOS, Android, Mac and Windows. It’s a highly capable platform and entirely possible to gig with on just a touchscreen device. That said, it has dedicated hardware too, such as the Reloop Mixon 4 and Beatpad 2.

Algoriddim’s combining of its various iOS offerings (djay 2, djay Pro, vjay) into one on iOS reflects a desire to simplify its product range, which makes sense.

The new subscription model is in line with lots of other software companies nowadays. We think US$4.99 a month offers good value for DJs needing the extra features, and of course everyone can get the basics for free – although note that if you want to use it with Spotify you will need to be a Spotify Premium subscriber.

As Algoriddim has always innovated on iOS first then developed afterwards for the other platforms, we’d expect similar changes down the line for Android, Mac and Windows too – although nothing has been announced.

• djay is available now on the App Store. Check the Algoriddim site for more details.

Have you tried out spinning using an iPad or iPhone? What are your thoughts on this new update to djay? Let us know below. 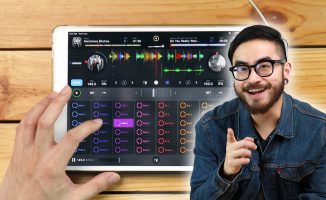