Kado, the app that shows you what songs other DJs have played before or after any given track, has announced that it is shutting down citing a shift in commitments and priorities for its developers. The app will continue to work until 31 March 2019, after which all operations will cease. All subscriptions have also been cancelled.

The brainchild of two former Twitter and Google employees who teamed up with Ean Golden of DJ Techtools, Kado made a splash when it was introduced back in 2016 and it looked promising. You could drag a song from your collection into the app, and Kado would pull tracklist data gathered from thousands of DJ mixes, showing you which tracks have been played before or after your song and by whom. It was a novel idea, and one that went way beyond basic cloud-based track recommendations, a feature which is now seen in almost all digital DJ software.

Did you use Kado? Do you think song discovery apps like this help or hurt DJing? Let us know below. 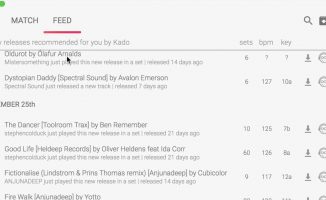 New App Kado Wants To Be Your "Personal DJ Assistant"