The majority of high-end controllers support up to four decks playing at once. All DJs know how to play with two decks, but most never bother to learn how to incorporate decks 3 and 4. Even if you do not plan on playing more than two tracks at the same time, a third deck can be used to add some creative elements to your set.

So check out these three techniques you can use to start adding more than two decks when you DJ.

Using drum or percussion loops on a third deck can give more energy to songs for more impact. Especially in a primetime situation, the last thing you want is to drop a track that sucks the energy out of the dance floor because of a drumless section.

Two things you will want to keep in mind is the BPM of the loop you are playing and also make sure that you have looping enabled in your DJ software so the drum loop will continually play. Then load the drum loop to the third deck then beatmix the loop to your tracks that are playing and drop it into the mix.

I like using this technique over songs with breakdowns and build-ups without drums to keep the energy in the crowd going. Sometimes these sections can take too long and you lose the momentum with the crowd, and this is a perfect way to prevent that from happening.

2. Drop in an acapella

This technique may require a little more practice but it is so effective. Adding in an acapella, especially a familiar tune, over a track without vocals gets a great crowd reaction when done well.

Much like adding in a drum loop, you will want to load the acapella to a third deck then match the BPM of the acapella to the tracks you are playing then. The tricky part is dropping the acapella in on time as many acapellas do not come in exactly on the downbeat. So you may want to practice with a few acapellas at home to get the timing down before trying this at a gig.

One thing I like to do when I use an acapella like this is to transition from one track to another with the acapella still running. This is a creative way to use an acapella as sort of a bridge between the two tracks.

3. Create your own DJ edit on the fly

This technique is a little more advanced but can be a lot of fun. You can use three decks to break down different elements of the same track to create your own DJ edit live during your set.

I like using this technique to create “DJ short edits” on the fly by shortening the break downs and build-ups of songs while adding another element of the song (usually a melodic element) to add more creativity.

These three techniques are fun ways to start implementing more than just two decks, and they can add some really fun and creative elements to your DJ set. Even just using a third deck to add drum or percussion loops can help your DJ sets sound different than just mixing from one song to the next.

Do you spin with more than two decks regularly? How do you use decks 3 and 4? Let us know below. 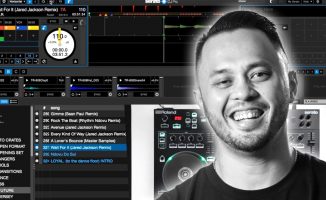 3 Creative Ways To Use A DJ App's Sample Player