Reloop has announced a new mixer, the RMX-44 BT. Costing €429, it is a basic four-channel club mixer, with the addition of Bluetooth connectivity on one of its channels. It is aimed at beginner DJs for their bedrooms, and also for small clubs, bars, pubs and event DJs who want a cost-effective mixer with all the basics covered.

The four channels of the RMX-44 BT each have a filter control, although there are no other built-in effects. There is a mic channel with two-band EQ and talkover, the headphones cueing has split cue, and the crossfader can be switched out for an Innofader for scratch DJs. Scratch DJs will also appreciate the crossfader curve switch, switching the crossfader from smooth to sharp.

The mixer has particularly good inputs and outputs for its price, with six line inputs and two phono inputs across its four channels, plus that Bluetooth connectivity too. There is per-channel VU metering, plus a master pair of meters.

As far as outputs go, it features balanced (XLR) and unbalanced master outs, plus a booth output and a record output too – great for livestreaming.

The RMX-44 BT is powered by a 12V “power brick” style cable and adaptor. The mixer is completely analogue, so DVS or digital DJs will need an additional audio interface.

Bluetooth isn’t often seen on DJ mixers, mainly because of the latency involved when playing music via it, but that doesn’t mean it has no uses on a DJ mixer.

Bluetooth in this instance would be great for having a backup music source on a phone, for instance, while playing out – but equally, if the mixer is used in a home or bedroom studio step-up, to just kick back and play music from Spotify, say, via your phone, through your DJ system.

• More information about the Reloop RMX-44BT on the company’s website. It is priced at €429. 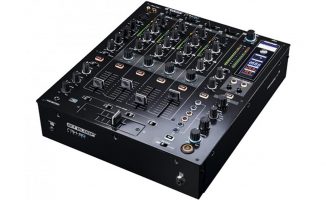