Denon DJ has just announced the LC6000 Prime, a full-sized deck DJ controller. It’s primarily made to use with the company’s own Prime media players, but also works with DJ software, like Serato, djay Pro AI, and Virtual DJ.

Looking like a Denon DJ SC6000 Prime minus the screen, the device is actually only a controller, containing no audio interface or built-in computer like its parent devices. Instead it is designed to be plugged into a Denon DJ Prime media player via USB, upon which it will instantly offer physical control over the second “layer” available in Denon DJ’s Prime media players (all Prime media players can play two tracks at once).

That means it would be easy to add one to an existing Prime set-up for a “third” deck, or two for a four-deck set-up – or even just buy a single Prime media player, and use one of these to turn it (along with any mixer) into a two-deck standalone DJ system.

An exciting extra use for this unit is as a software deck controller. By plugging it into a spare USB socket on a computer running Serato DJ Pro, Virtual DJ or djay Pro AI, it casn be used to control a deck of your choice within your DJ app. In our Denon DJ LC6000 Prime Review, for instance, you’ll see us using it with a Pioneer DJ DDJ-1000SRT.

It would even be possible to buy four of these, link them up to a Serato-compatible mixer, and “build” your own full-sized four-deck Serato controller, for a fraction of the cost previously (ie buying four full media players to achieve the same).

What’s more, with Algoriddim’s djay Pro AI, you could simply plug in your iPhone or iPad and use up to four LC6000s, which is pretty cool, especially as your iPhone would then be acting as a portable brain for the whole set-up! 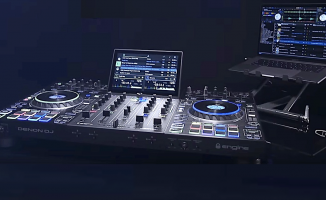