Algoriddim just released a new version of djay Pro for the Mac. Now at version 1.3, the update brings the desktop version of djay Pro up to speed with its iOS counterpart, which includes the new Jog Waveform Mode that replaces the vinyl / tonearm graphic with a flatter, CDJ-style jogwheel. The four-deck 4 Waveform Mode has also been overhauled, and there are new full-colour zoomable waveforms.

Slice Mode has also been ported over to the Mac version of djay Pro, which acts much like the Slicer effect in other DJ software. Enhanced BPM detection and beatgridding have also been thrown in the mix, as well as better Spotify library navigation and CDJ jogwheel-integration.

djay Pro is becoming an even more attractive proposition: with the experience between both portable and more “traditional” laptop DJing growing closer, bridging that gap between platforms means that you can perform with either an iPad or your Mac with potentially more confidence, knowing that there’s just a slight learning curve to jump when you cross.

• djay Pro 1.3 is now available in the App Store as a free download for djay Pro users. Check the djay Pro website for more details.

What do you think of djay Pro? Have you tried DJing with it on your Mac or iPad yet? What was that experience like? Where do you think this software is headed? Let us know below. 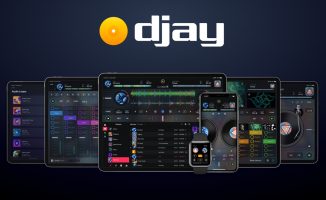