KJs are three Ableton Live DJs/producers from Manchester, England, whose blend of “electro house, funky, bass, tropical, rave pop mashups & cleverness” has proved a successful mix, with lots of DJ bookings, tracks signed by London and New York labels, and a rather splendid remix of Kool and the Gang getting them noticed in all the right places.

I wanted to find out how they DJ, how technology has helped them, and where they see things going for digital DJing and for their band over the next few years…

So Philip, you’ve been performing together in one form or another for a while now, tell us how your DJing and producing careers began.

Well we used to be called Strange Angel, making drum and bass music with FastTracker software! We actually did pretty well – it was when MP3.com was happening, and in their very first online music charts we ended up getting some number ones, a few videos, even one vinyl release. It all petered out though. But a few years later, the three of us got back together, when we discovered Ableton Live in 2004. We got involved with a club night called Bandwidth which gave us somewhere to perform.

We were all DJs anyway – James is a decently skilled DJ, Taz played a bit and I was more a reggae, dancehall and ska “selector”. But at this point, we all started ripping all our old vinyl to Ableton.

Having three people coming up with ideas for our sets was a blessing and a curse at once, because we had a wide range of tastes. We all roughly liked same thing but each of us had different fringe aspects, so we were trying out stuff out you definitely wouldn’t think of – pop, breaks, house, jungle mixed with hip hop – mixing up different dance styles.

We shelled out on an M-Audio 410 sound card, which we’re still using after five years of gigging, and basically just had fun seeing how many tunes you could play at once, using accapellas, loops and so on.

At this point you’ve all come together, you’re DJing using Ableton. How did you get into producing dance music again from there?

After two years we realised we were creating new music when we played live, and we started to think we should mix some of what we were doing down.

From mash-ups you get to thinking that you want to remix a bit. Then we started releasing a couple of plain remixes – La Roux’s Bulletproof was one of the first. Things moved quite quickly from there because we’d set up our own blog for putting them out, plus we were using a pre-SoundCloud site called Blinker that gave you short links you could use to promote your tunes on Twitter and so on.

Our remixes were going down well, and in the background we were writing music again, getting back into Reason, DJing all the time, plus putting out some shocking original music! It was just to get into the swing of things again, to be honest. But as we improved and kept up the online promotion, we got chatting to small labels, doing some remixes for Kiss My Bass in London. We also gave them some original tracks, and from there met up with New York label Rot10 Musik, who loved our stuff and are putting out some more techno-oriented tracks for us. That brings us up to date.

So after you took a bit of a break, you got back together partly because the software interested you?

Yes – I mean, when we first got the laptop, sound card, got our tunes in Ableton and started playing, we realised how easy mixing was! We thought: “Now we don’t have to think about beatmatching, what can we do instead?” It wasn’t a case of “now it’s really easy to DJ…”, more “what new stuff can we do with this?”. It’s true that computers and laptops have changed DJing though. I mean we were talking to 1Xtra [national radio station in the UK] about submitting a mixtape to do a slot on the station, and they say “nah, just send us a tracklist because mixes don’t mean anything now” – people assume DJs can mix now, it’s a given.

You’re all doing this while holding down day jobs. How do you manage that?
Well we don’t meet up as often as we’d like – once a week is normal, maybe a little bit more when we’ve got a gig coming up. One of our saviours is Dropbox, which we use for sharing music when we can’t be together. We’ve tried all sorts of things, but Dropbox just works, which makes it better than the rest in our eyes. There are other services out there that do that type of thing, but Dropbox is just so reliable.

We use it for two types of things – we’ve got 30GB of our record collections on there to start with. Not sure about the legalities of that, mind! But we do own all of those record somewhere along the line! Then there are the tunes we’re working on – samples, Ableton project files, a whole bunch of Reason files and so on.

We use it to collaborate on tracks: It’s good if you work for a couple of weeks on something and get bored, then the others can take over and have a go. Dropbox keeps old versions of things so you can always go back if you don’t like what someone’s done to a project you’re working on. Of course, we’ve upgraded to the paid version to get 100GB of space.

Because there’s three of us and we are busy people, we couldn’t think of another way of sharing everything. We thought about having multiple hard drives and syncing those, but that would have been horrendous. This way, you can be on the bus and stream stuff from Dropbox on your iPhone…

Tell me how the three of you perform together. What kit do you use? What do you each do?

We take three stereo outs from Ableton via our M-Audio 410 which we plug into an old Stanton mixer, the SMX501. We’ve got an Evolution / M-Audio box of knobs, and a Midi keyboard.

My job is to trigger tracks using Ableton and the Mac keyboard. I have full tracks, loops, samples and breaks all lined up. Taz triggers breaks and loops from the Midi keyboard and uses our box of knobs to ad filters, beat repeat and a variety of effects. And James mans the mixer, listens to all the channels and determines what the final mix will be. 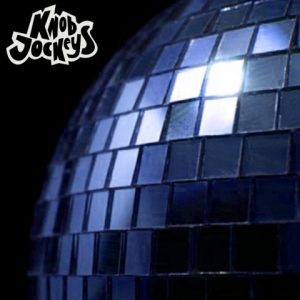 You’ve developed your own mix of software and analogue. Do you ever have any glitches or issues with performing on a set-up like that?

Just occasionally if, say, we have to set up while someone else is playing. Because it’s analogue, there are so many cables between the sound card and the mixer. Get one pair of those wrong – channels 1 and 2 the wrong way around, or a left and a left together – and sometimes you only realise when you’ve started performing and mix in to your second tune!

One thing I can say though is that Ableton has never crashed live on us. There was a period around Ableton 8.0 period where it seemed to crash a lot, but they’ve sorted that our now.

So with all the new digital gear around, have you had any thought to upgrading your kit?

We’ve started using TouchAble on the iPad in practice, and will use it live soon. It’s just easy to cycle through everything in Ableton on an iPad rather than using the mouse and keyboard.

You really don’t want to be DJing with a mouse in your hand. TouchAble lets you press things instead, and because it’s WiFi it’s really simple. You still need to be near the laptop though, to see the waveforms on the laptop screen. Apart from that, we’re considering a Novation Launchpad just for all the buttons, and also a digital mixer to escape from all those wires I spoke about!

We’ve got a bit of cash put aside to do this. One of the things we want to change is all the gear we cart around with us – we want our set-up to be far smaller and lighter.

You’ve got music out on both sides of the Atlantic, you DJ regularly, and have made a name for yourselves in your home town; what are your plans for the next year or so?

Well we want to produce a lot more. We want to be producer/DJs rather than DJ/producers!

Having said that, we’re expanding our live set to be a bit more “live”. We did an hour of our own music last year at Basscamp, but we were still pretty much just mixing our own tunes together. TouchAble should help us to cut things up a bit more, plus we’re looking to get a vocalist on board too.

Because we all work, we can’t spend hours and hours every day honing our skills, so we’re always looking for other ways to make our music more original.

It’s true – that’s why I say it’s a bit like Photoshop. If you ask four graphic designers how to do the same thing, they’ll all give you a different answers. They’d all be correct, it’s just different approaches. It’s such a flexible tool, that it can be overwhelming.

My advice would be to go on YouTube and find three or four people’s Ableton templates and see how they use them. A lot of people have their templates so you can download them, so you’ve got a starting point. We keep meaning to put up a template ourselves, but never get round to it!

So KJs is short for “Knob Jockeys”. Care to explain why?

Hm, well that’s my fault. we were called Zero Latency, which is even worse. I just said: “We might as well call ourselves ‘Knob Jockeys’, it’s better than ‘Zero Latency’…” – and unfortunately we did. It comes from the fact that we’re DJs who twiddle knobs…

And that’s why Kissy Sell Out wouldn’t mention your name?

Yes, exactly. He played our record on the radio, but wouldn’t say who it was by! So we kind of thought it would be a good idea to shorten it to “KJs”. My advice to anyone is don’t pick a band name that’ll embarrass you later. We’re number one in Google for Knob Jockeys but not, unfortunately, for KJs, as yet…

Good luck, and thanks for your time Philip.

• Philip McDermott of the KJs was talking to Digital DJ Tips’ Phil Morse. All their music is available on their website. 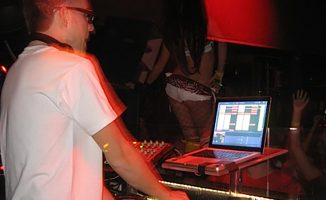 Over To You: Is Ableton Live A Good Way To Start DJing? 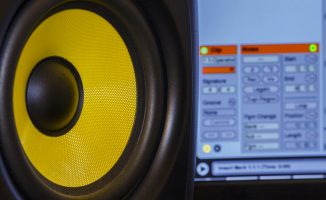 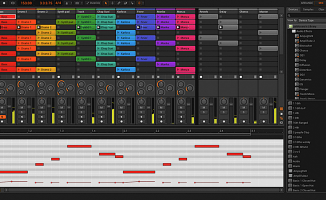 Your Questions: Is Ableton Live 9 Worth The Price Tag? 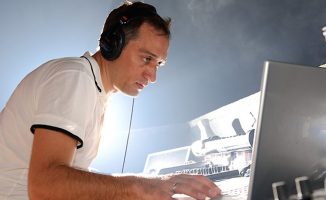 The Real Reason Many DJs Stare At Their Laptops