The DDJ-800 is a two-channel controller for Rekordbox DJ. It does all the right things a modern mid-range controller should do: it’s got onboard screens, a deep feature set that digital DJs have become accustomed to, and portability without sacrificing build and functionality. It’s the spiritual successor to the DDJ-SR and DDJ-RR, and at this price point, it could be the controller that ushers in Pioneer DJ’s new age of controllers that increasingly mimic the club standard CDJ/DJM layout while, ironically, surpassing them in terms of capabilities. If you’re in the market for a new DJ controller (and provided you’d like to stay within the Pioneer DJ ecosystem), look no further.

The DDJ-800 is Pioneer DJ’s latest entry into its current line of controllers for Rekordbox DJ that adopt a club-style layout similar to that found on a CDJ-2000NXS2 and DJM-900NXS2 set-up. For the most part, what that means is that the looping controls are now based on the looping section of a CDJ / XDJ media player (eg two orange Loop In and Loop Out buttons) and the effects are now accessed via a Beat FX strip beside the mixer, apart from the Sound Color FX.

While the layout isn’t a radical departure from past DDJ offerings, it does present a shift in the way that Pioneer DJ presents its Rekordbox DJ controllers which, historically, were “watered down” versions of the CDJ/DJM standard. With the DDJ-800 (and the DDJ-1000 and DDJ-400 before it), Pioneer DJ aims to make moving between a club set-up and a home / bar set-up easier.

The DDJ-800 is a two-channel controller: The mixer section has a three-band EQ, Sound Color FX knob and volume faders per channel, and a crossfader. You can also route a phono or line signal to the two mixer channels, and you can switch among the phono / line inputs or the four software inputs (decks 1 – 4 in Rekordbox DJ) via the switching matrix at the top of each channel.

Each deck on the DDJ-800 has a jogwheel with a built-in display for viewing track data and waveforms, a Jog Adjust (aka Feeling Adjust) knob to change the jogwheel tension, eight performance pads with eight performance pad modes, a long throw pitch fader, transport controls, and looping controls.

Effects come in the form of Sound Color FX (Dub Echo, Pitch, Noise and Filter) found to the left of the mixer, and the Beat FX section found over on the right. It comes with 14 Beat FX (more on them later), various controls for adjusting Beat FX parameters and an OLED display for viewing Beat FX status.

It’s worth noting that while the DDJ-800 has a mixer that works “standalone”, meaning you can route audio through it coming from connected turntables or media players, you can’t use the Sound Color FX or the Beat FX unless the controller is connected to your laptop running Rekordbox DJ.

Round the back, the DDJ-800 has XLR and RCA master outputs, 1/4″ booth outputs, switchable phono / line inputs for both channels, two mic inputs (one combo, one 1/4″), an RCA aux input, a USB jack for connecting your laptop and a power socket and power switch. The front has 1/4″ and 1/8″ headphone outputs.

The DDJ-800 is Rekordbox DVS-ready, meaning you can hook up turntables to it and spin with timecode vinyl using Rekordbox DVS, though it comes as a separate purchase. That said, the DDJ-800 will work with Rekordbox DJ straight out of the box without the need for a Rekordbox DJ licence thanks to the new “plug and play” feature that’s just been implemented for it, along with the DDJ-400 and DDJ-1000 controllers. 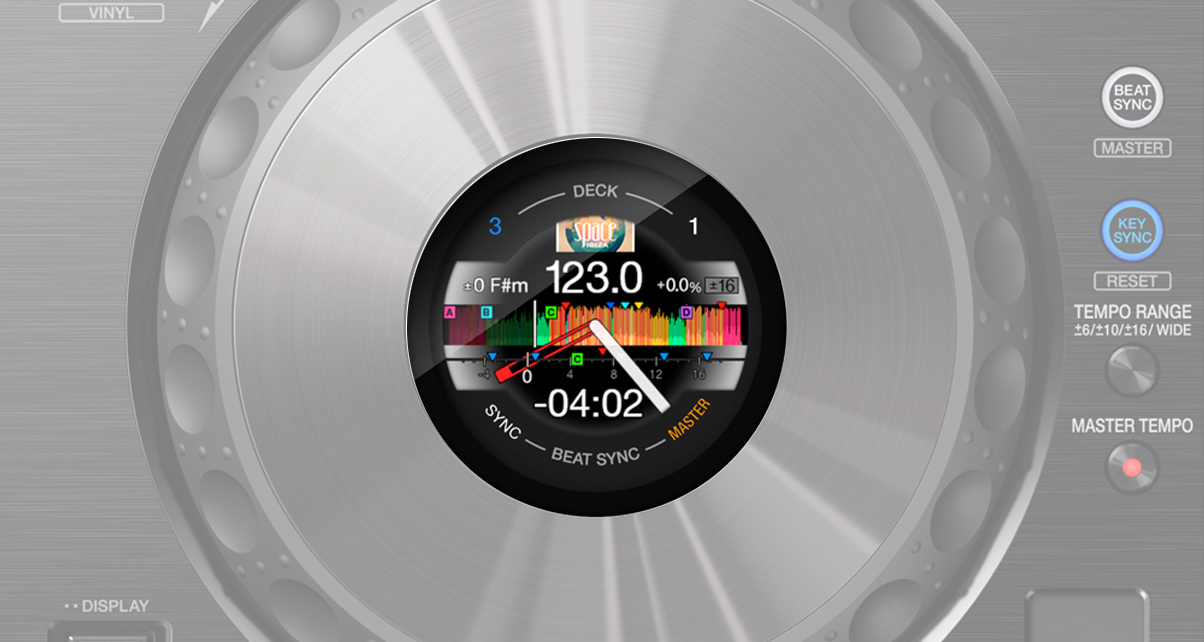 The biggest feature of the DDJ-800 is the onboard jogwheel displays. They are found in the centres of both jogs, and they show track waveforms, album art, needle position, a Cue Scope for viewing upcoming hot cues, key and BPM data, and more. The idea is that by having all that information on your controller instead of the screen, you’ll spend less time staring at your laptop.

It’s a great idea in theory for those who don’t want to gaze at their computers like they were checking Facebook. And while you are able to look at your laptop less, I still found it impossible to completely peel myself away from it just because a laptop’s screen presents a greater amount of data on larger display real estate.

For instance, there’s no way for you to see if your beats are lining up via the waveforms on the jogwheel displays. You also can’t browse your playlists and Collection through them – you’ll have to peer at your laptop for that. And the truth is, I don’t mind doing those things on a laptop because they let me DJ better.

So while the jogwheel displays aren’t perfect or essential, they’re a nice to have feature, and one that I’ve grown to like over the past few months as I’ve switched on to using the DDJ-1000 for gigging. I think of it as a “data summary” of the track that I’m playing, though I still find it unnecessary when there’s an information-rich display courtesy of my laptop that’s just off to my side.

A possible iteration for Pioneer DJ (DDJ-2000 perhaps?) would be a built-in display in the centre of the mixer that shows waveforms and your Collection, ala the Rane Seventy-Two mixer or the XDJ-RX2. 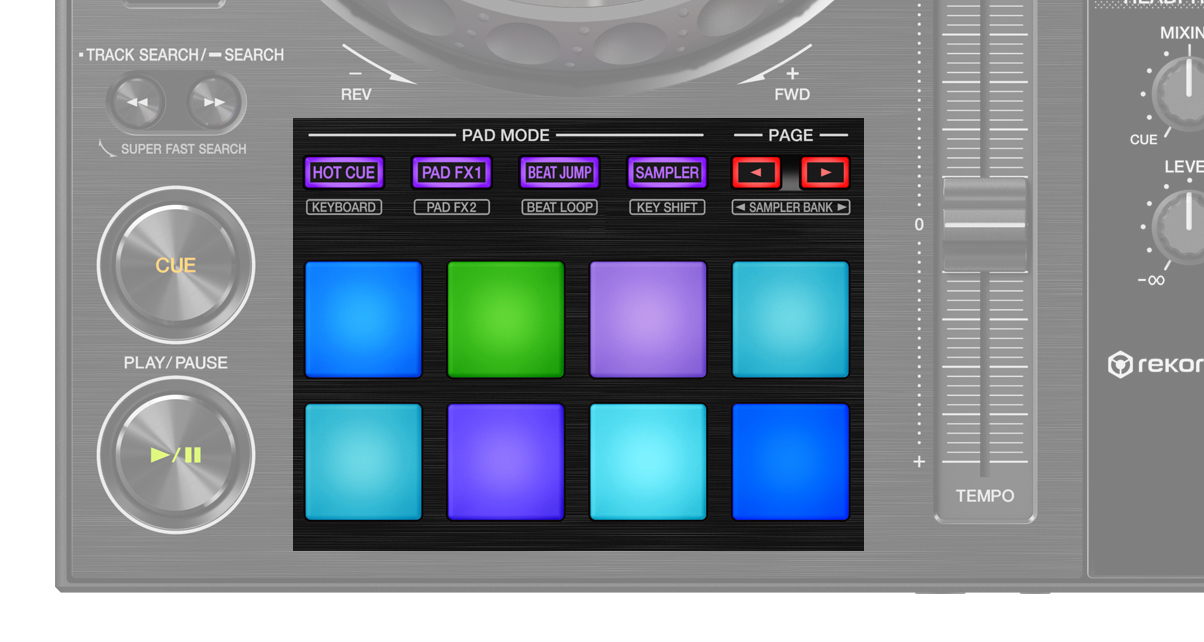 The performance pads on the DDJ-800 are made of chunky rubber, and not the plastic type found on other controllers. I prefer pads like these instead of clicky buttons because they have a quicker response time for lightning-fast finger drumming. They’re the same size as what you’d find on the DDJ-1000, so that means they’re a bit smaller than the pads of full-size controllers like the DDJ-RZ, but that’s totally fine. 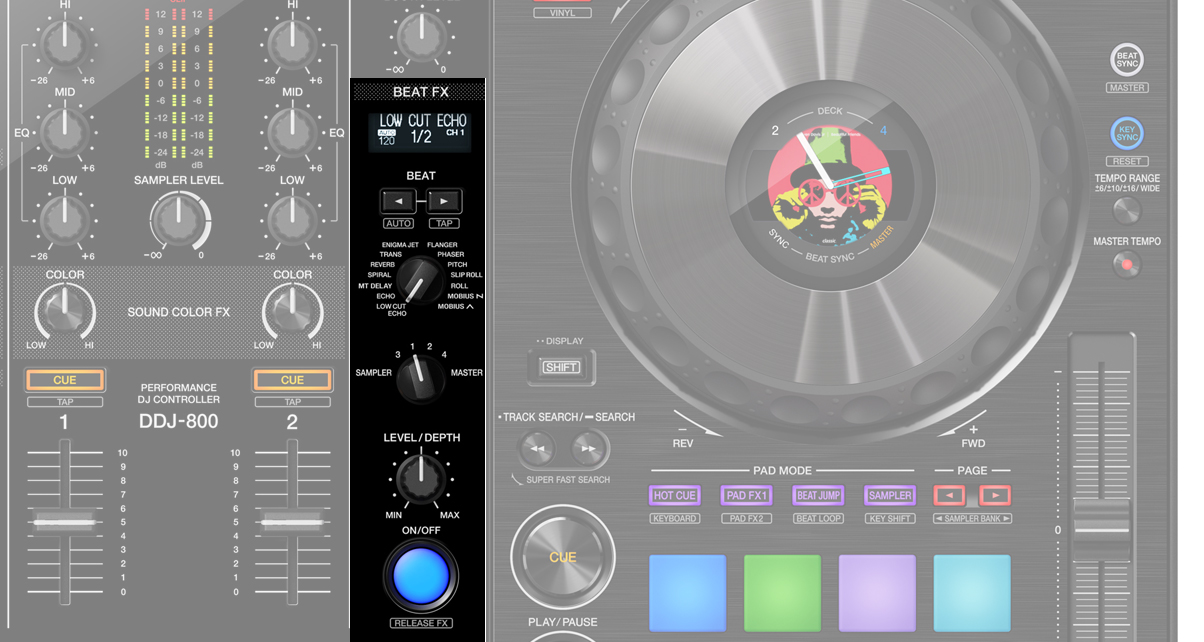 The Beat FX strip on the DDJ-800 allows you to apply time-based effects to any of the channels, the Sampler, the mic inputs, or to everything coming out of the master output. There are 14 Beat FX in total: Low Cut Echo, Echo, MT Delay, Spiral, Reverb, Transformer, Enigma Jet, Flanger, Phaser, Pitch, Slip Roll, Roll, Mobius Triangle and Mobius Saw.

An OLED display at the top of the Beat FX section lets you see which effect you’ve currently got selected, as well as the tempo and current beat length, which you can modify via the Beat left and right buttons below it. 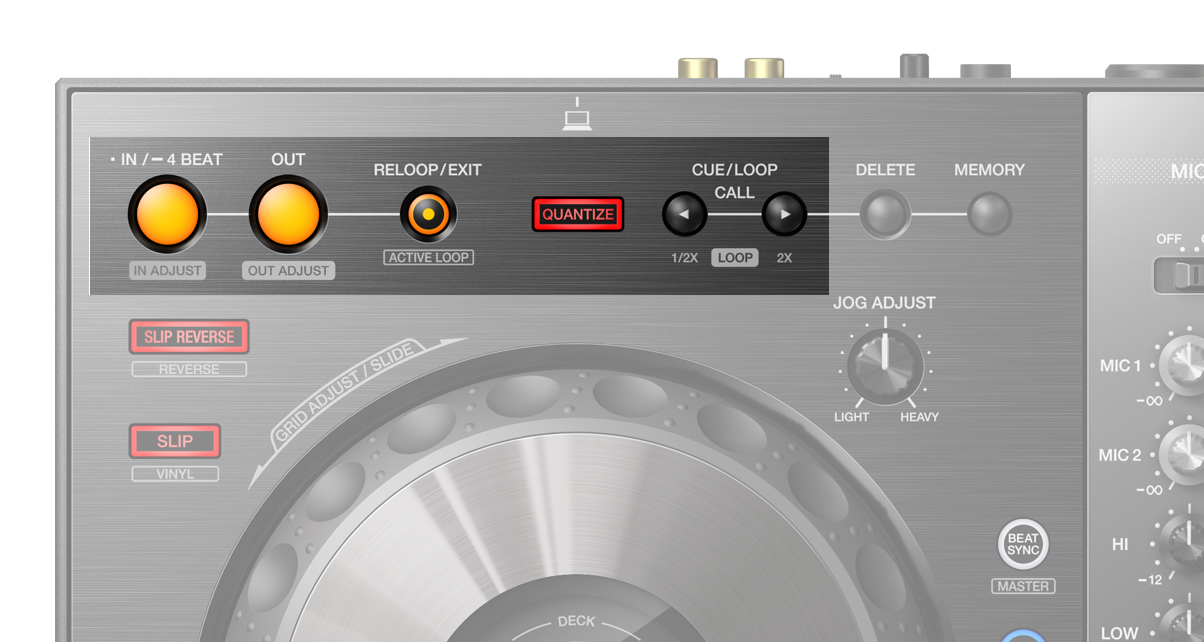 Looping on the DDJ-800 works via the looping controls at the top of both decks: you’ve got Loop In and Loop Out buttons for setting manual loops, and to set a Four Beat Auto Loop you just hold down the Loop In button for a few seconds. Once you’ve got a loop engaged, you can double or halve the length of the loop by pressing the Cue Loop / Call buttons. To exit, just press the Reloop / Exit button. You can also edit the in and out points of your loop by pressing the Loop In or Loop Out button and adjusting the point with the jogwheel.

This is similar to how looping is done on a CDJ / XDJ media player, so getting used to this workflow is useful if you plan on spinning at clubs and bars that have a CDJ/DJM set-up in their booths. 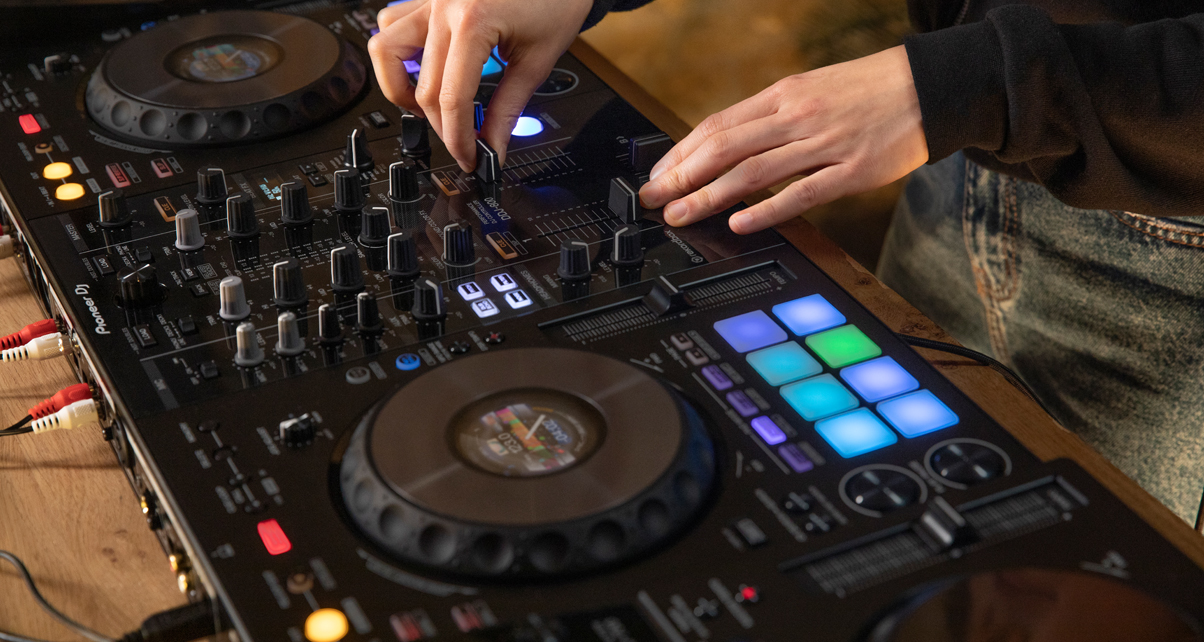 The DDJ-800 does all the right things a modern mid-range controller should do: it’s got onboard screens, a deep feature set that digital DJs have become accustomed to, and portability without sacrificing build and functionality.

It’s the spiritual successor to the DDJ-SR (one of my favourite controllers ever) and DDJ-RR, and at this price point, it could be the controller that ushers in Pioneer DJ’s new age of controllers that increasingly mimic the club standard CDJ/DJM layout while, ironically, surpassing them in terms of capabilities. If you’re in the market for a new DJ controller (and provided you’d like to stay within the Pioneer DJ ecosystem), look no further.