Rekordbox 5.0 is a worthy update to Pioneer DJ’s music management and performance software. The new flat interface is less cluttered and easy on the eyes, and the new Performance mode features will appeal to controllerists and scratch DJs. Overall, this is the software you should be using to manage your DJ library if you spin with CDJs regularly, and if you own a Rekordbox DJ-compatible controller but have not tried Rekordbox DJ yet, there’s never been a better time to do so.

Rekordbox has come a long way: it started off as a music management tool that you can use to export tracks to a thumb drive for use with CDJs (think of how iTunes let you transfer songs to an iPod).

Now, it’s grown into a full-on DJ environment complete with all the trimmings you’d expect in a contemporary digital DJ platform: hot cues and loop cue editing track analysis, and sophisticated music library management and playlisting. It even comes with its own suite of add-ons that can be purchased to extend its functionality, such as the ability to DJ with your laptop and DJing with video.

Rekordbox 5.0 is a free download from the Rekordbox website, and is available for both Mac and PC. You just download the app and install it on computer. You may be asked to create a Kuvo account, which is Pioneer DJ’s music tracking system, but you can opt not to have one.

I’ve currently got two set-ups in my studio: a Pioneer DJ DDJ-RZ, which I use for DJing with my laptop running Rekordbox DJ (also known as “Performance” mode), and a CDJ / DJM set-up, which I use for DJing with a thumb drive full of music prepared in Rekordbox (also known as “Export” mode). Using Rekordbox means that I can DJ from the same music library, regardless of whether I want to DJ with a laptop (Performance mode), or with a thumb drive and CDJs (Export mode). 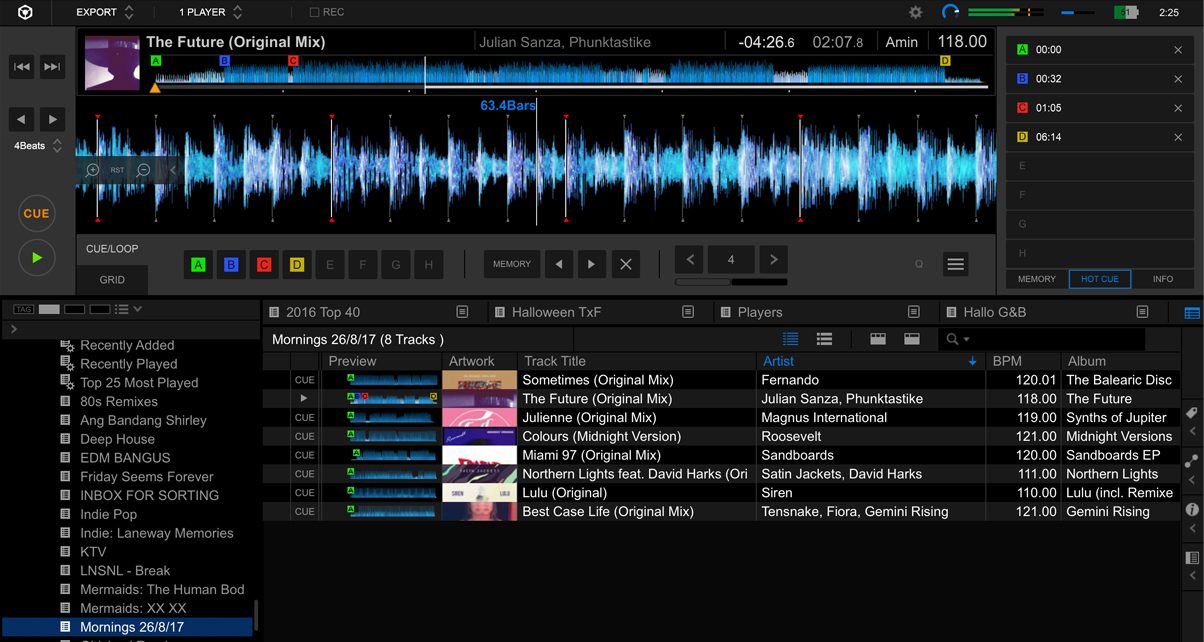 Both Export and Performance modes benefit from an updated graphical user interface. Rekordbox 5.0 sports a flatter, modern look that is easy on the eyes. The virtual decks look sleeker, and the FX section at the top looks less cramped. The text also looks sharper and more uniform, plus you can change font sizing in Rekordbox’s preferences – that’s great news for us DJs who are visually-impaired (I’m “legally blind” without my glasses), but even folk with 20/20 vision would appreciate the crisper text. 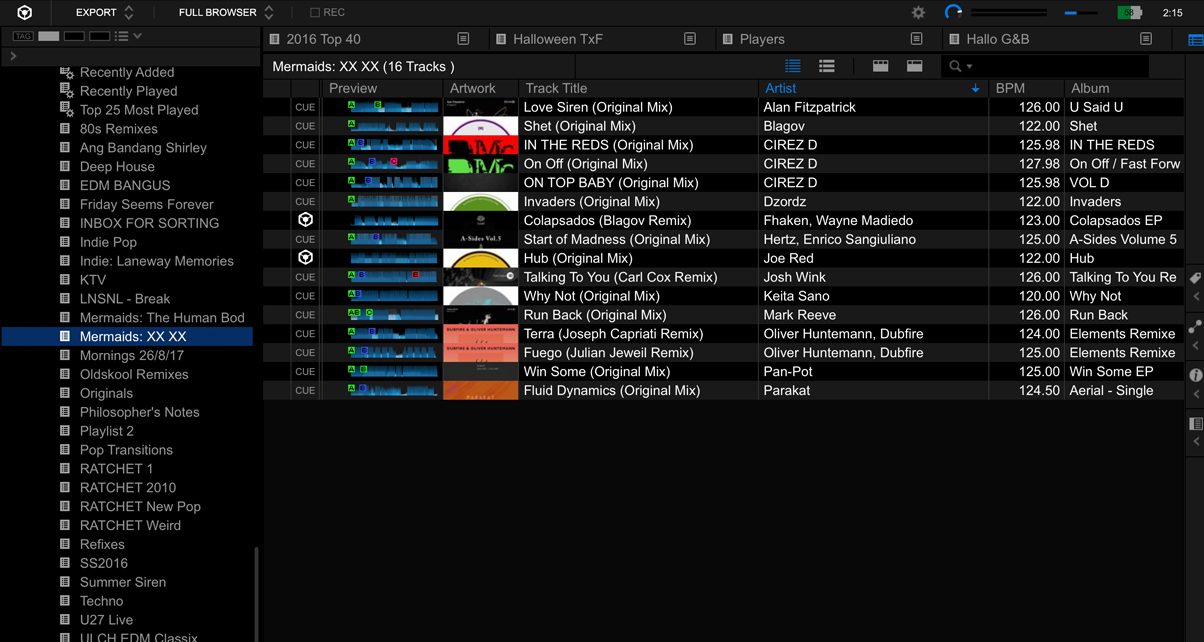 The library section also gets a graphic boost. It looks a lot slicker: gone are the dull grey hues that defined previous iterations of Rekordbox. In their place is a simple black, blue, and white colour scheme. Scanning your library is also more responsive and faster – I was always annoyed at the “text ghosting” that happened when you scrolled up and down. It made me feel like I was using an app from the 2000s instead of the 2010s. That’s gone, and it’s great.

Overall, the interface tweak is a welcome change, and is reason enough for the upgrade.

Pioneer DJ claims that it’s done some under the hood tweaks in this version of Rekordbox, specifically in the “engine” that runs the app. Dubbed “Koretech”, Pioneer DJ says that this overhauled engine makes Rekordbox run smoother and faster.

Apart from the graphic improvements mentioned above, we didn’t feel a massive performance difference between using Rekordbox 5.0 and Rekordbox 4 during normal DJ use. 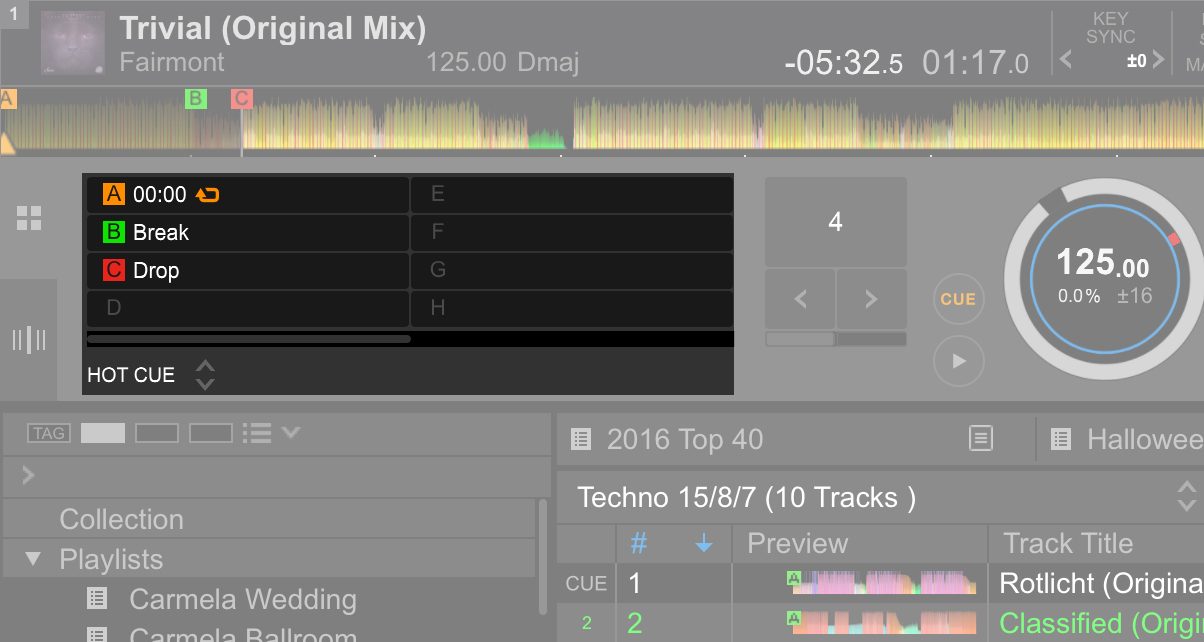 There are now up to 16 available cue points (eight was the previous maximum), and you can assign them anywhere in a track. You can change the colour of the hot cue and the colour also changes if you’re using a controller with RGB performance pads, or you’re using the CDJ-2000NXS2. You can also label these cue points by adding text to it, handy if you use a naming convention for song sections (eg Break, Drop, Build Up).

Now let’s take a look at Performance mode, which is activated by purchasing the Rekordbox DJ add-on pack… 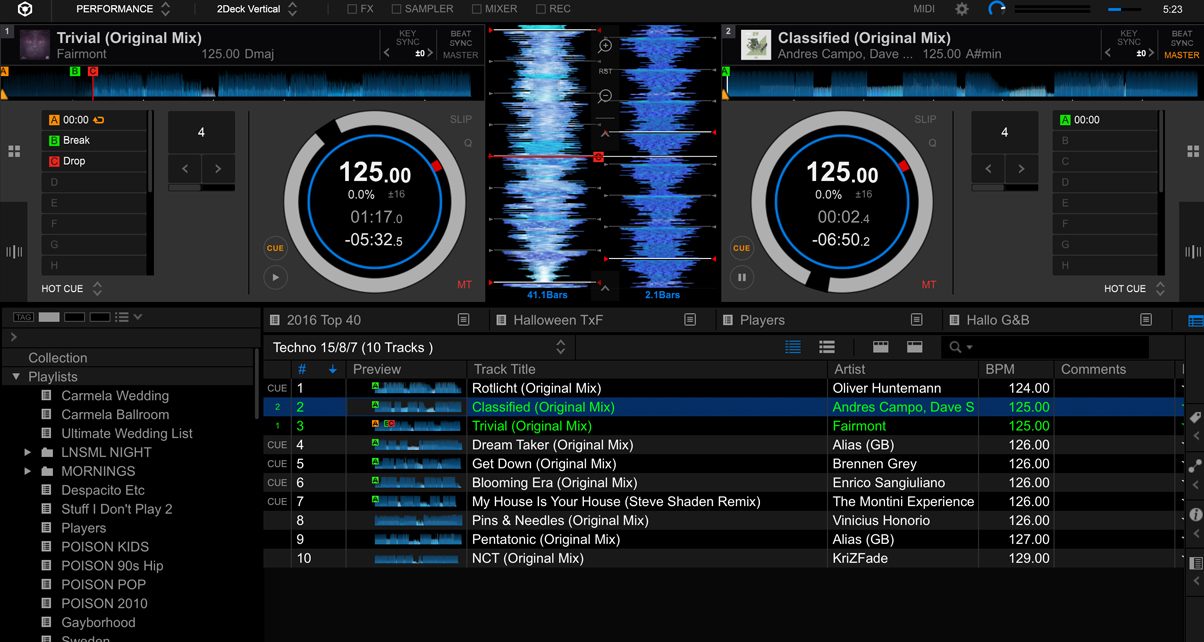 Performance mode lets you DJ with your laptop connected to a Rekordbox DJ-compatible controller, media player, or mixer. In this mode, Rekordbox works pretty much the way Serato DJ, Virtual DJ, and Traktor Pro 2 do – you drag and drop songs from your library onto the virtual decks, and you play them back using the connected DJ device. 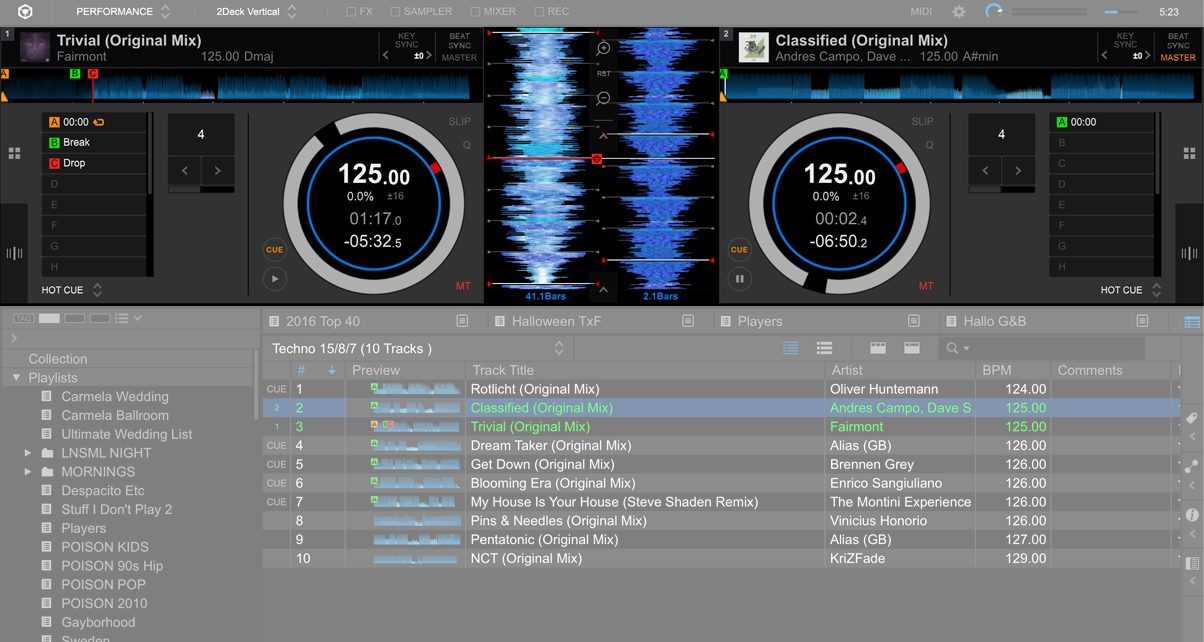 Rekordbox DJ lets you control up to four decks, and you can choose two or four deck operation via a dropdown. Four decks can look quite cramped on smaller screens, and I do prefer the layout and simplicity of having two virtual decks. 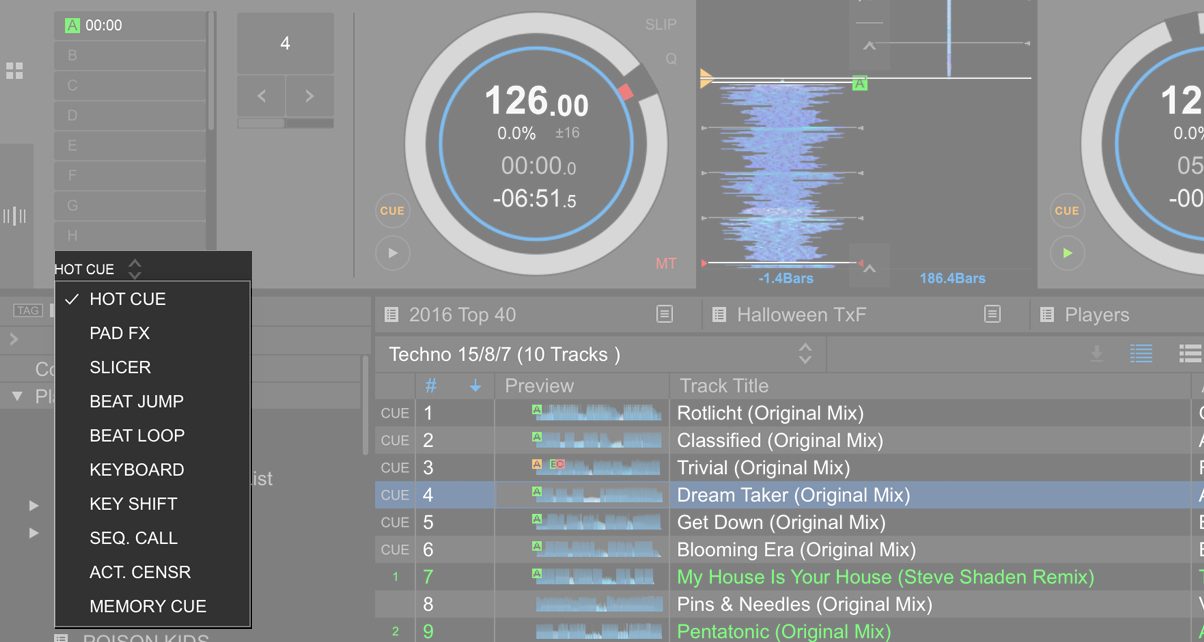 There’s a dropdown menu at the bottom of each virtual deck, and this lets you select from up to 10 functions: Hot Cues, Pad FX, Slicer, Beatjump, Beat Loop, Keyboard, Key Shift, Sequence Call, Active Censor, and Memory Cue.

Hot Cues displays the 16 hot cue banks that you can edit. Pad FX shows two rows of four pads that you can assign effects to (handy if you’re using a controller that supports this). Slicer divides the waveform display into eight segments that you can trigger using the slice buttons; Beat Jump lets you move through a track in rhythmic increments; Beat Loop allows you to perform stutter effects in different note values.

Keyboard and Key Shift are the new pad modes in Rekordbox 5.0. Keyboard lets you pitch up or pitch down hot cues for melodic cue point juggle routines. Key Shift lets you change the musical key of a song (12 semitones up or down).

Sequence Call lets you record a series of sample presses for playback; Active Censor lets you create non-destructive edits to portions of a track that you’d want to censor (eg cursing, pejoratives); and finally Memory Cue lets you edit cue or loop points in a track. 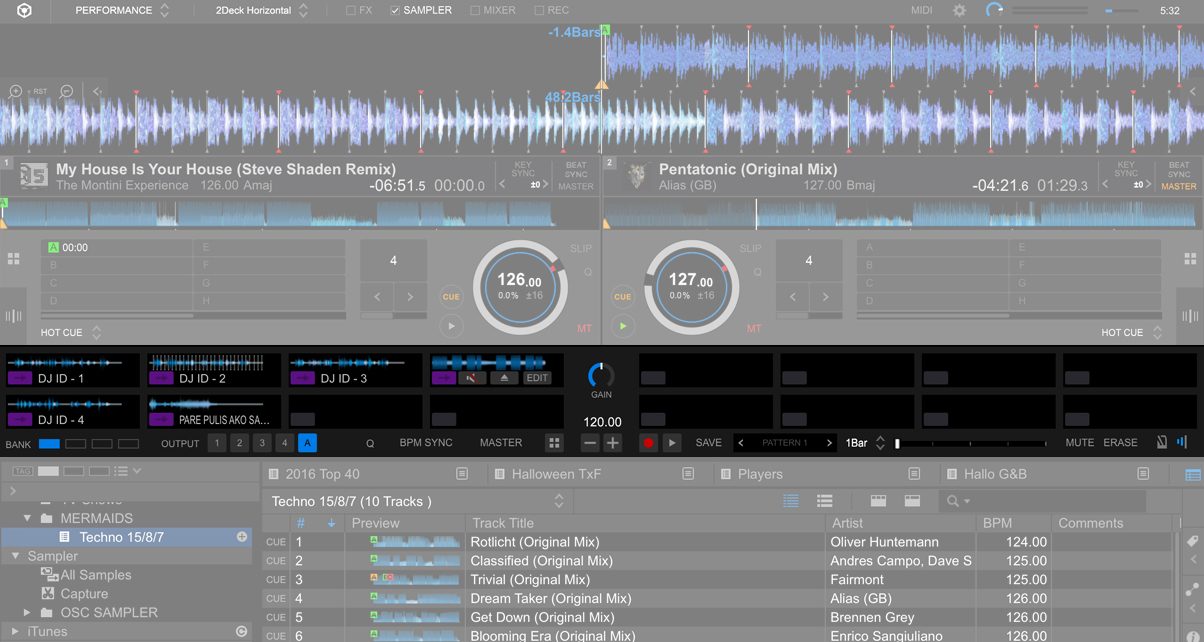 Rekordbox DJ comes with its own Sampler feature. This lets you load loops or one shots for triggering while you DJ. You can even choose to sync them up with the deck that’s currently playing, which ensures everything is in the same tempo – you’ll still want to use your ears though to check if the loops playing are in phrase. 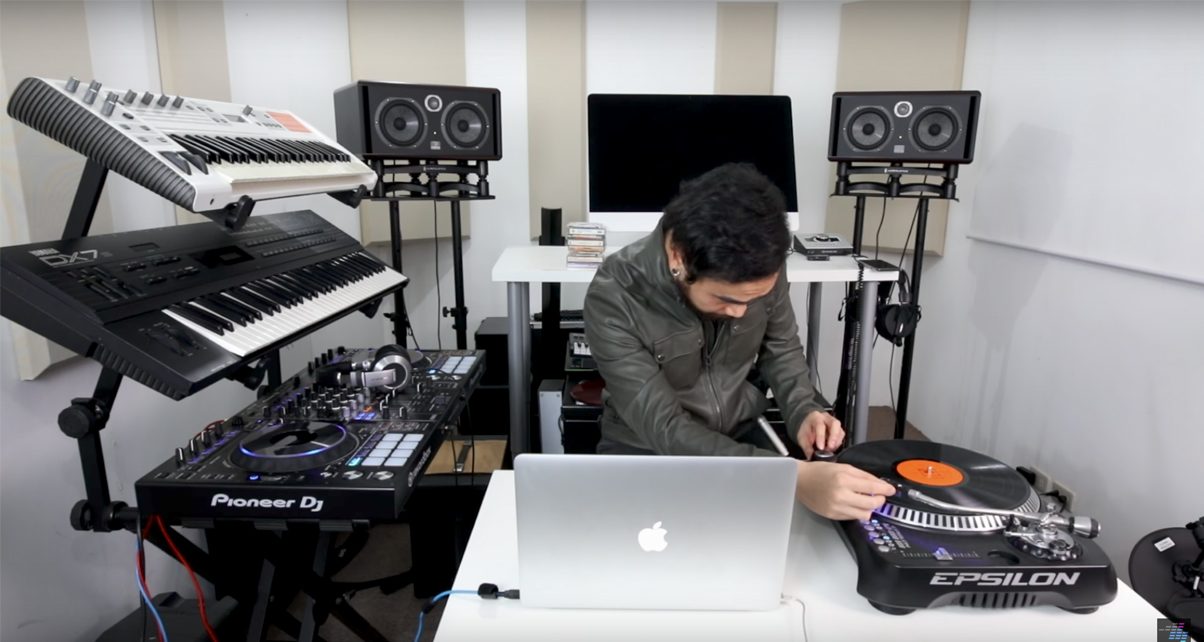 Rekordbox lets you rip your vinyl records (or any analogue source) straight to your Rekordbox library. That means that you can then DJ with those songs when you export them to a thumb drive, or if you’re using Rekordbox DJ. It simplifies the ripping process, and it also “enhances” the audio by increasing it if it’s too soft, as is the case with older records. 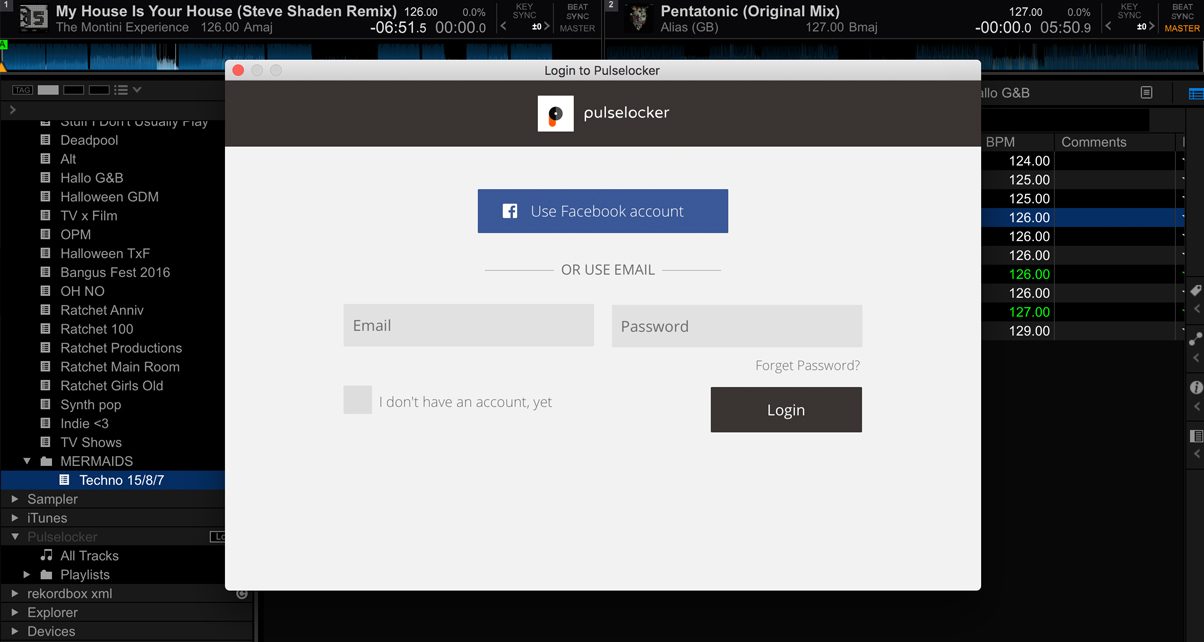 Rekordbox DJ comes with Pulselocker baked in. Pulselocker is a music streaming service for DJs, and it lets you drop tracks from the Pulselocker catalogue (220 terabytes of music) straight onto your virtual decks in Rekordbox DJ. You’ll need a Pulselocker account and membership to do this, and it isn’t available in all countries at the time of this writing. 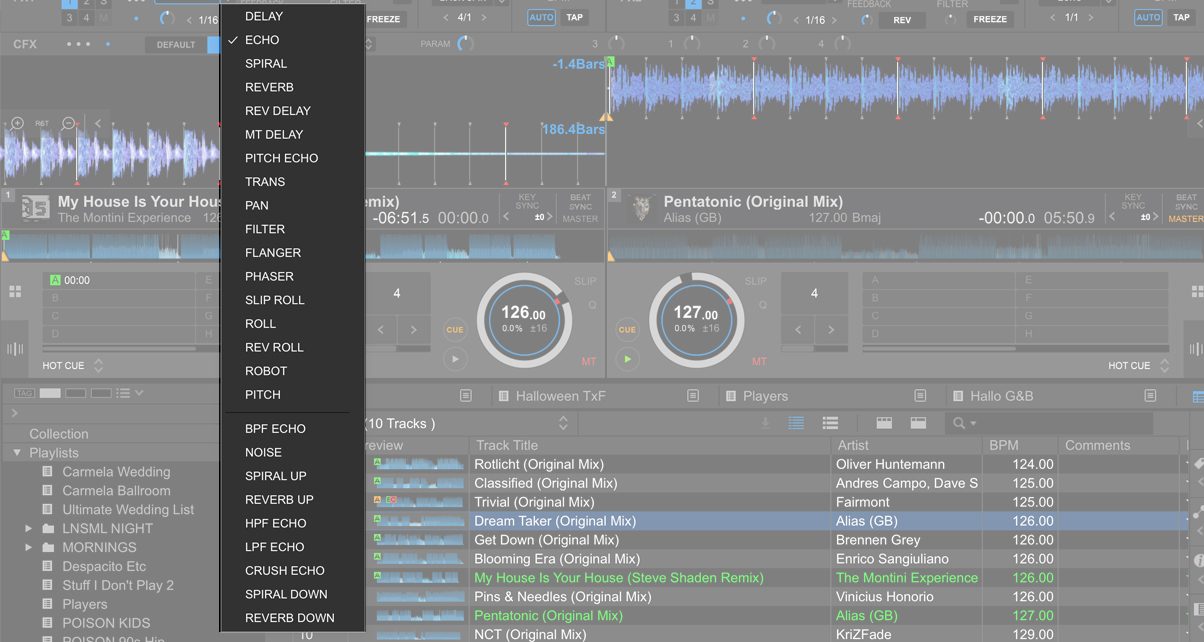 Rekordbox DJ comes with 17 effects onboard (26 if you get the RMX-1000 add-on effects pack). You can configure them to be single or multi-effect chains. Rekordbox DJ also has the Pad FX mode, which lets you trigger effects using the pads in your DJ controller or in the Pad FX menu in a virtual deck’s dropdown.

Rekordbox DVS is available as an add-on pack that you purchase. With Rekordbox DVS, you can use Rekordbox DJ to spin with timecode media (vinyl, CDs, or thumb drives). This lets you hook up a pair of turntables or media players and use them to control the virtual decks in Rekordbox DJ. You’ll need to use a Rekordbox DVS-compatible mixer, DJ controller, or interface to do this. 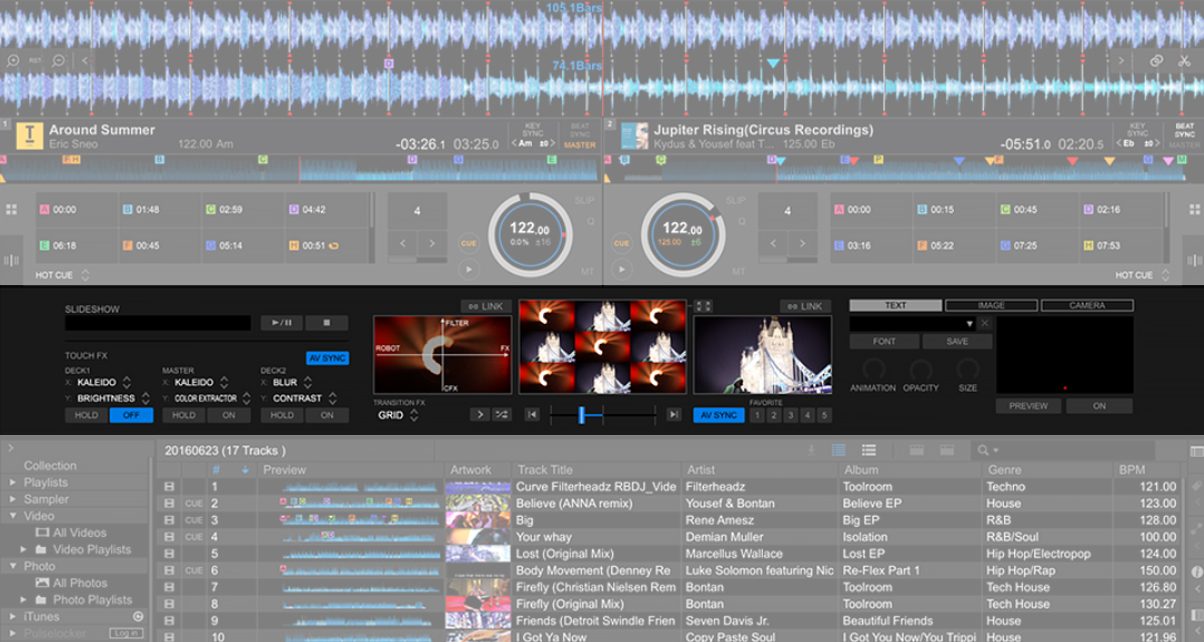 Mixing video is also possible with Rekordbox DJ thanks to the Rekordbox Video add-on. It appears as a menu section in the middle of the Rekordbox DJ interface where you can preview video clips and apply visual effects to the video that’s already playing.

Having gone through Performance mode, let’s take a look at the other available mode: Export. 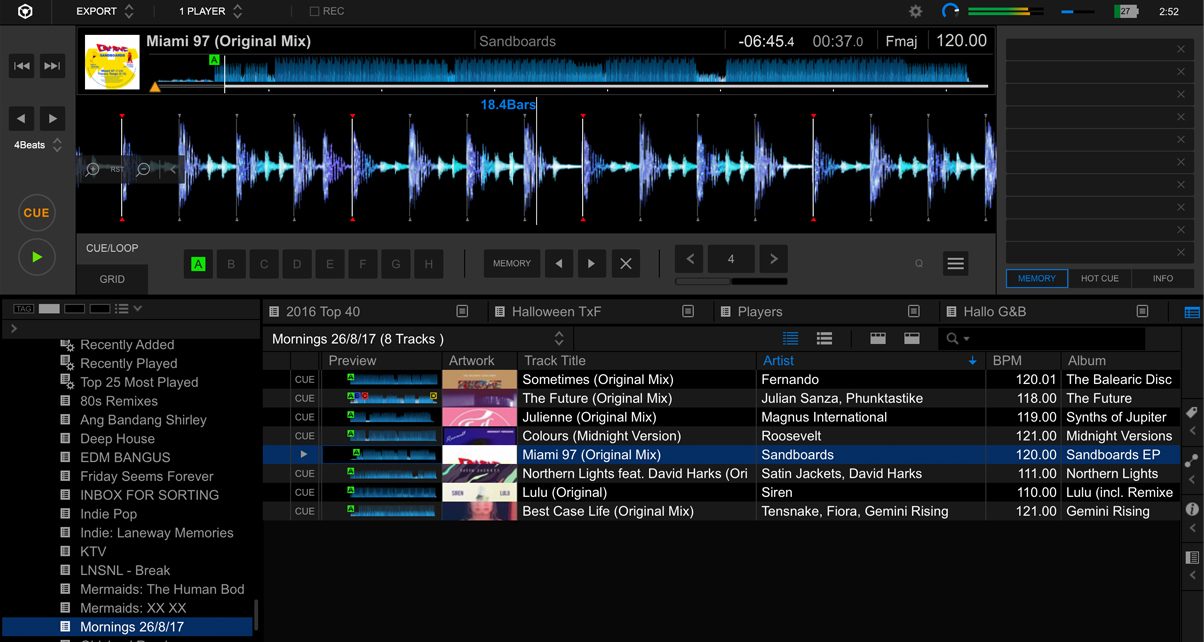 Export mode allows you to manage your entire library, create playlists, tag and edit songs, and add / remove hot cues and memory locations for individual tracks. This is where you prepare tracks on your laptop for export to a USB thumb drive, which you’ll be using when you DJ with a Rekordbox-compatible DJ media player like CDJs / XDJs (more on that below).

You can also audition how two songs would blend with each other: You can have up to two tracks playing at the same time, and you can hit sync and mix them using the crossfader. No EQ controls or effects here though – it’s strictly for auditioning tracks. The mixing, after all, happens on the media player / DJ mixer set-up that you’ll be plugging the thumb drive to. 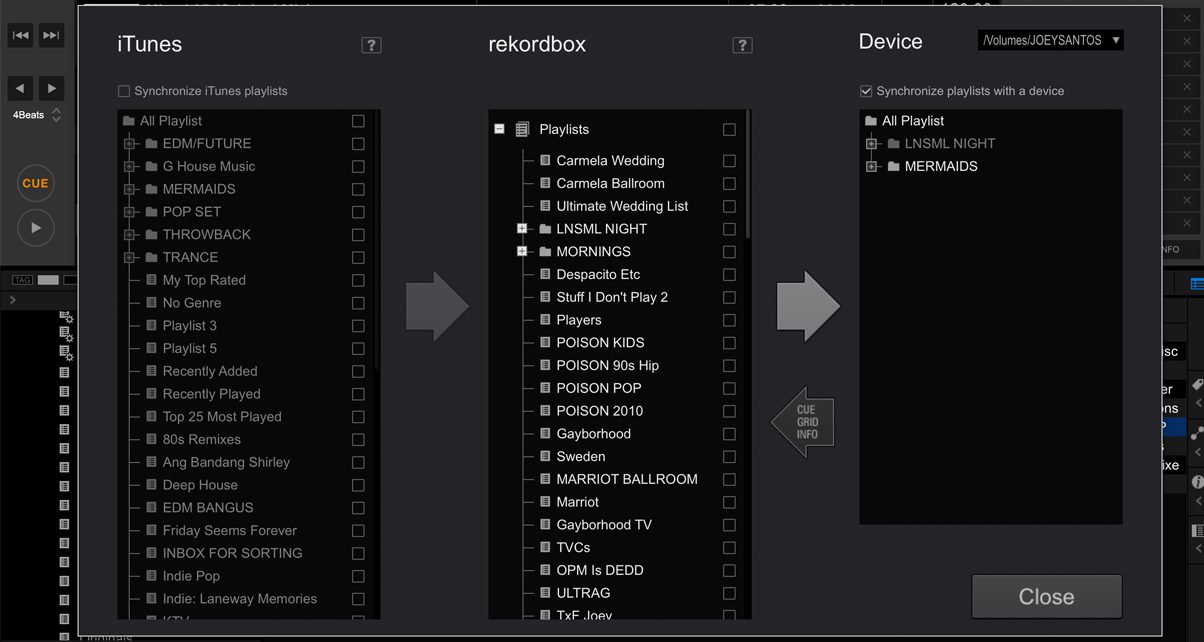 Once you’ve prepared your tracks and created a playlist for them, you then transfer that playlist to a thumb drive using the Sync Manager. You can select which playlists you’d want to move to your USB drive, and Rekordbox syncs them for you, ready to be used with a media player.

One of the new features of Rekordbox 5.0 is the ability to use your thumb drive with someone else’s laptop running Rekordbox. Previously, your USB drive is tied to the laptop that had your Rekordbox collection. That means that you can have your entire music collection on an external drive, and you can DJ off of it or export playlists from it using someone else’s computer.

Rekordbox 5.0 (and Rekordbox DJ, by extension) is a worthy update to Pioneer DJ’s music management and performance software. The new flat interface is less cluttered and easy on the eyes, and the new Performance mode features will appeal to controllerists and scratch DJs.

Like all previous Rekordbox releases, Rekordbox 5.0 still has a few bugs: performance pads don’t work on the Pioneer DJ DJM-S9, for instance. Pioneer DJ is quick to release minor updates though, and a patch for this should be in the works.

For everything there is to know about Rekordbox check out Rekordbox Made Easy – the most complete and detailed “how to” course available, to unlock your software’s full potential and improve your DJing.