I’m always banging on about how you need to get gigs to really learn DJing – and unless you’re one of those DJs who’s happy messing around in your bedroom doing mixes for only yourself to hear, I stand right by that: No crowd, no deal. DJing is done in public. It’s a two-way thing, and it can’t be two way if it’s only you there. Thing is, to get those gigs, you need to hustle – and many people aren’t at all comfortable with that, especially beginners.

“I’m not good enough!” they say. Well sorry, I’m going to hit you with it: You’ll never get good enough unless you get out of your comfort zone and land those gigs.

Luckily, you don’t have to be an amazing DJ to start playing in public. The important thing is that you need to start. I’m going to tell you some of my own story, and then introduce you to two other DJs – Elliot and Peter – to show you exactly what I mean.

About four years into my “club” DJing career, I was running my own club night, playing every Saturday to 500+ people. I was a fully professional DJ and promoter. I was paying the club hire fee, the doormen, the other DJs. I was making enough money to be buying my own house from what was left over. I was in touch with agents and booking big names, who were playing alongside me. Other times, when we had no big names playing, I would play the night either with my resident DJ partner or even on my own. Our crowd was loyal, and people often commented that the resident-only nights were better than the guest DJ nights!

So let’s be honest – nobody could have said that I wasn’t good enough. There I was, doing it, week in week out. The proof was there for all to see – I’d “made it”. But actually, there was one voice telling me I was a fraud, that I wasn’t a real DJ, that I should give it all up before really embarrassing myself.

The truth was, I didn’t think I was good enough, I didn’t think I was ready. I did feel like a fraud. And you know what? I’ve since learned that this is a perfectly normal, natural way to feel. The best artists feel like it. It’s what gives you terrible nerves before performing, making you horrible to be around. It’s what has you waking up at night, sweating and dreaming about empty dancefloors and people laughing at you. It unfortunately seems to come hand in hand with doing something creative for a living or for a hobby – whatever that may be.

And this happens whether you’re a beginner or already a success.

I’d felt exactly the same way four years earlier, when I played my first faltering gig in a small local bar. (The night was called “Testarossa”, and it was in a basement bar two doors up from Manchester’s Hacienda club. These details never leave you.) That time, I was so nervous, I had my set list written out on a tiny card hidden from public view – a card I could hardly read because my hand shook so much for the whole hour I was DJing.

Don’t be a martyr

But what’s the alternative? What happens if you fail to fight the devil on your shoulder telling you you’re not good enough? What happens if the weeks, months, years roll by and you don’t hustle yourself a regular gig or two? Let me introduce you to Elliot (not his real name). Elliot was my brother’s girlfriend’s brother. He was a lovely guy, and also a real fan of early house music. (This is when it was, you know current house music. I’ve been doing this for 20 years!)

Elliot was a quiet guy, but he could talk to you for hours about samples, and synthesisers, and producers, and record labels. He has a meticulously organised record collection (I remember he used to number his vinyl and keep it in the order he’d bought it in, month by month). He was one of the few people I knew who had real Technics record decks (he’d saved for years). We all looked up to Elliot for his genuine passion for the music.

Sadly, Elliot never once to my knowledge played outside of his house.

“He’s a great DJ, he just needs a break,” people would say. “It’s just that nobody wants to give him one.” But breaks don’t come to you. You have to go and find them. Some people are so purist they just can’t bring themselves to engage with the real world, to meet it half-way, to get a dose of reality and to see where they might be able to fit in.

And who can blame them, really? It’s hard out there. Nobody cares about your “brilliance”. To get a go, you need to hustle. You need to see openings. You need to take a deep breath and begin to believe. You need to invent your reality. You need to project forward a bit, be a bit cocky.

Yeah sure, you may need to take gigs you’re not completely comfortable with, but ultimately, you have to write your own story here. It’s DJing, not a college course. There’s no path for you to follow, nobody ticking your boxes as you complete each stage. To an extent, you have to believe your own hype. Elliot wouldn’t see it, and he didn’t get anywhere.

Let me ask you an uncomfortable question. Have you played a public gig yet? How long have you been DJing?

Repeat after me: I am not a charlatan!

Hang on, you may say. If I’m just beginning, surely to throw myself in front of an audience is wrong? Even if I can conquer the nerves, doesn’t that make me a charlatan? Trust me, you’re not a charlatan. It’s time to meet our second DJ, Peter. He was. And I’m pretty sure you won’t see yourself in him.

I actually knew Peter around the same time as I knew Elliot, right at the beginning of my DJ career. My friend’s dad owned a successful company. His business partner had a son, and that’s who Peter was (again, I’m not using his real name). Peter was used to getting what he wanted. Buying what he wanted, actually. And he cottoned on to the whole DJ thing.

At the time, I was hustling, DJing four or five times a week in local bars, inventing nights for myself and selling the ideas to hapless bar managers. (I used to play a chill-out gig on a Sunday in one bar, funky house on a Tuesday in another, I used to warm up for a local club night in an adjacent bar on a Saturday – it was gigs, gigs, gigs at any cost!)

I remember as if it were yesterday a conversation I had with Peter, a conversation that made me sad and angry. “I don’t know why you’re bothering with all of these bar gigs,” he said, pityingly. “I’m going to do some DJing. It looks cool. I’m going to get myself DJing in a real big club.” And you know what? He did it. He hustled a promoter who had hired a big club for a night, and managed to spend some of his dad’s money and grab the back room for himself. He put on a party.

The thing was, though, Peter couldn’t DJ, and really had no intention of putting any effort in to learn. He had zero respect for other DJs. He thought it was easy, that anyone could do it. He taught himself to put records on, bought the music everyone else was listening to, and told the world he was a DJ. Probably the only person who thought he was amazing was Peter himself.

I honestly don’t know how Peter’s party went, but he went very quiet when I asked him about his DJing career after that, and I never heard of him playing anywhere else. I suspect he lost some cash and didn’t make many friends. I do know he ended up working for his dad as a living. I’m sure he was quite happy, but point is he didn’t make it as a DJ.

Why it’s OK to be a hustler

Peter failed because he was all hype, no practice. Elliot failed because he couldn’t cope with getting himself out into the real world, couldn’t handle the idea of things not going right for him if he tried. But the truth is, as long as you’re in this for the right reasons, there’s absolutely nothing wrong with hustling a bit, and there’s nothing wrong with failing every now and then either, because that’s how you get better.

I DJed scores of awful gigs to empty venues on my way to success. But I’ve always liked to look at it this way: Even if you have a howler of a night in public, at least you get to practise on a decent sound system. At least you’re on the field. At least you’ve turned up. If you’re just starting out, my single biggest piece of advice is this: Don’t worry that your DJing isn’t good enough, worry that it’s not happening enough.

And we’ve already established where DJing happens: In public. You need gigs in order to improve. And you need to hustle to get them. So while the little voice will always tell you you’re a fraud, let me tell you something else that also always seems to happen when you hustle yourself a real gig: Inspiration arrives. Your practice sessions seem to get a bit more focused. Things start to come together musically. You start to feel just a little bit like a DJ. You get better.

Ultimately, the only hustlers who get tripped up are the Peters of this world, and we’ve already seen you’re not one of those. And if you don’t hustle? Well, you may turn out like Elliot. And I’d hate for that to happen to you.

• The Digital DJ Tips online video course How To Digital DJ Fast is designed to teach you the right skills to get you from complete beginner to DJing in public in just four weeks. Read how it’s worked for other people here.

How have you managed to hustle your way into DJ gigs? What’s worked for you? Did you wish you’d done it earlier? Are you still building up the skills or nerve to bag yourself that first public show? Please share your stories in the comments. 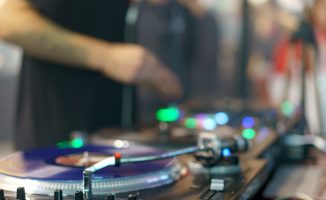 How To Become A Mobile DJ, Pt 2: Choose To Think Like A Pro