Here’s a video to inspire you. London’s Michael May, aka DJ Mikey Four, describes the DJ’s role as an entertainer, a reflector of the mood of the crowd, and as an educator (but never at the expense of the other two). Michael also shares a personal reflection from the night he was called to perform in London’s Club Koko, two nights after London’s July 7, 2005 terrorist bombings…

I found this film courageous, moving and 100% truthful. I actually had a similar experience a few years back. My home city (Manchester, England) was bombed by the IRA on Saturday June 15, 1996, miraculously killing nobody due to a warning being given.

In our case the police decided we were not allowed to open our night club that night as the whole city was cordoned off, which was a real shame because we all felt a real need to come together and do something positive and healing. We had to wait a couple of weeks, but the need to unite against those who had tried to destroy the heart of where we lived was just as strong when we were allowed to throw our doors open finally.

I remember it like it was yesterday. (Especially when we played Bucketheads “The Bomb” for some dark humour…) Brings to mind the words to Sterling Void’s club classic “It’s Alright”:

Dictation being forced in Afghanistan,
Revolution in South Africa taking a stand,
People in Eurasia on the brink of oppression,
But it’s going to be alright,
‘Cos the music plays forever on and on…

• This short film is of a speech from TEDxAlcatraz that kicked off in a nightclub, in downtown San Francisco on December 1, 2010.

What’s the worst circumstance you’ve had to DJ in? Have you been on a dancefloor united by common grief, or by a cause you felt you had to do your bit to champion? Let us know your own “DJing stories from the edge” in the comments below… 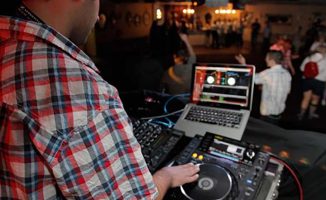