Frankfurt’s Musikmesse / Pro Sound & Light show is the biggest music fair in the world. In among the bassoons and concert PA systems, just about every DJ equipment manufacturer and software house has their latest wares on show. We spent three days there to check out all that’s new and good.

We’ve already covered Serato ITCH 2.0, the Novation Twitch controller and the DJ-Tech 4Mix prototype, but here’s our round-up of the rest of the products that caught our eye this week.

Remember, some of this stuff is not even in production yet and only at prototype stage (some might never see the light of day at all). Other products are pretty much ready to be launched. Also, prices may well change from projections given here. But whether they all finally appear exactly like this, they’re definitely worth a browse if you’re interested in what tomorrow’s DJs may (or may not) be using.

Woah! That’s some serious money being talked about for Pioneer’s answer on the Rane TTM57L for Serato Scratch, but for Traktor Scratch Pro. It’s got a whole host of Traktor-friendly features, with control of transport, hot cues, effects, loops, sample decks and library browsing in the program.

Pioneer says it boasts high-end components including an apparently unique-to-Pioneer magnetic crossfader, and the show DJs were doing impressive things on it on the Pioneer booth… but this is definitely one for the serious players, price-wise.

There are several third-party bags available for the Traktor S4, the best value of which is currently a reapportioned Novation bag – all of which are filling the gap left by Native Instruments not having a soft bag available itself (although we’ve seen a prototype, there’s no release date for an NI bag).

Step in UDG. This prototype bag has a big, well padded orange internal controller compartment (which will also fit the Denon DN-MC6000 and the American Audio VMS-4), a separate rear compartment for a laptop with two removable padded laptop covers to suit different sizes, two large pockets on the front, jumbo zippers and backpack carry straps.

For the DJ who wants complete versatility, the four-channel Mixdeck Quad has got you covered. Working just fine as a Midi control interface for DJ software (it will come with Virtual DJ in North American and Traktor LE in Europe), it also has core Midi support for iPad (you can use it with djay for iPad), twin CD players, USB slot for playing from USB drives, and switchable line/phono inputs on the back so you can use it to mix traditional sources too.

Oh, and there are also a 1/4″ TRS and an XLR microphone inputs. And booth and master (unbalanced RCA and balanced XLR) outs. And onboard effects. Phew! the interesting thing for us here is the iPad support. Does this herald the start of iPad DJing proper?

With two channels (four line inputs and turntable inputs), two USB input/output for PC playing and recording, and nine beat-synced effects, plus 35 seconds of samples in five banks, two mic inputs (1/4″) with mic EQ and RCA master outputs as well as TRS balanced outs, the little DJ-Tech DJM-303 has always been a bargain and became a best-seller for the brand in 2010.

It will shortly be available in red and blue for the fashion conscious DJ for whom black just won’t do.

Throw in the ability to USB two units together so that you only need to plug one USB storage device in to access the tracks on both units, and two of these plus a feature-rich budget outboard mixer (maybe a Behringer Nox model) could give you a versatile digital DJ system that punches considerably above its weight.

MixVibes showed us the beta release of Cross 1.6, their flagship DJ software. This update adds much-improved browser and library functionality: There are for the first time smart playlists, like in iTunes (the iTunes integration is also improved). Drag and drop record covers have also been added, plus the ability to import media thanks to enhanced explorer/browser functionality.

(Incidentally, they also showed us a new version of their VFX software with HID support for Pioneer CDJ-2000s, with full display of track information including album sleeves straight from the software on the Pioneer colour displays.)

DJ controllers that use hard drives or USB sticks exclusively have until now really been the domain of mobile DJs looking for all-in-one solutions, as their displays have been more akin to CDJ players and their library browsing limited. Stanton is trying to change all that and give DJs an all-in-one (ie no laptop needed) unit that you can mix properly on and have fun using at the same time, with proper jogwheels, looping, hot cues, effects, beatsync, touch-sensitive high-quality platters and the ability to read media from USB, hard drives, even smartphones.

What really stands it out, though, is the fact that it has a high-quality colour screen, big enough to display colour parallel waveforms, and lots of library information, including the ability to use crates and sort playlists, and move folders of music aorund quickly and easily. Add autoplay and you have potentially an all-in-one DJ solution that doesn’t need a laptop, and doesn’t suck. Looking forward to reviewing this one (these were working prototypes and they wouldn’t let us have one).

Price: Around US$500 • Availability: Soon

This looks like being a worthy addition to the laptop stands currently on the market; more than Magma’s 2.0 then 2.1 stands, this is lightweight and easy to fold and pack away.

We didn’t get a chance to perch anything onto it to see how it fared in a real world situation, but it looked OK, and was simple enough to set up and fold away, with silver hand-screws to tighten it up once unfolded. Its success will be dependent mainly upon what price point it comes in at.

Lesser-known DJ brand Citronic has come up with a potentially attractive DJ controller here, that could appeal to mobile and mixing DJs alike. Physically it looks like two Pioneer CDJs and a small mixer squashed into one box. The controls are nicely laid out, the touch sensitive jogwheels look and feel excellent.

It can play from USB sticks, or plug in to DJ software to work as a normal DJ controller. You can even play from computer on one side, and USB on the other. In effect, it is a DJ controller that you don’t always have to take your laptop to use if you don’t want to, as the LED readouts give you track and library information right there on the unit. It’s not as sophisticated as the Stanton SCS4.DJ (also in this round-up) display-wise, but nonetheless it has FX, looping, cues, adjustable and reversible crossfader… We’d like to review this properly, as it looks potentially to be a great little controller with a twist.

Decksaver has won a name for itself producing smart, high-quality see-through plastic covers for modern DJ equipments, from the Technics 1210 through to DJ controllers of all shapes and sizes. The picture here shows their new Traktor Kontrol X1 case; there’s a Maschine version too.

The company also showed us a beast of a case for the Pioneer DDJ-T1, which is currently just a prototype due to the challenges of making a case for such a large controller; it has special grooves for picking it up and reinforcements either sides of the mixer section to hold thre case off the knobs below.

This cross-media player will play happily with your DJ software, CDs, and USB drives, plus there’s the novel addition of SD card playback too. Its strengths are its Pioneer-esque (note the LEDs in the centre) jog wheels, its 24-bit/96kHz sound card, and its full-colour TFT touchscreen display.

It was very much a prototype that we saw, but once they’ve finalised the features it looks like being an interesting addition to the high spec, value-priced cross-media player part of the digital DJ market.

A major new piece of functionality added to an existing piece of kit here. The Denon DN-SC3700 is a club CD player with a difference – like the Numark V7 and the Stanton SCS.1d, it has a proper motorised platter, slipmat and real vinyl on it, so it feels pretty much exactly the same as playing with vinyl.

So here’s where it gets interesting for digital DJs – thanks to a new firmware upgrade, the player can now be switched into Midi hybrid mode and control Virtual DJ, Serato Scratch or Traktor Scratch Pro via Midi, with extremely low latency. This means that DJs wanting a real vinyl motorised control surface for their DJ software but don’t want to go down the control CD route now have an exciting new option to choose from, as this is a great piece of hardware and cheaper than Pioneer CDJ, with the advantage of that motorised platter.

Pioneer had a soft carrybag for its new supersized DJ controllers, the DDJ-T1 and the DDJ-S1, on show at its stand. But UDG also had a prototype bag for these two controllers on show, which – assuming it reaches production – looked like an attractive alternative.

The bag has backpack-style carry straps for putting on your back, real jumbo zips, and lots of high-quality padding, plus a separate compartment for your laptop (with two internal padding options depending upon laptop size) and a rather attractive orange interior to boot.

This unit packs an awful lot into its pretty slick-looking casing, for a low price. The cross-media players play digital music from CDs, USB drives and SD cards, plus the unit can be used as a DJ software controller too. The TFT full-colour screens are also touchscreens.

Meanwhile the mixer is curiously three-channel, with two switchable line/phono stereo RCA ins, and one aux RCA in plus USB input. The mic channel can take XLR (rear) or 1/4″ TRS (front) inputs, and has its own EQ and talkover. There are master, booth and record stereo RCA outputs plus independent stereo outs for both CD decks.

• Remember, we’ve also covered Serato ITCH 2.0, the Novation Twitch controller and the DJ-Tech 4Mix controller prototype from the show in more detail, so click these links to see them. Show videos to follow.

What did you find most exciting from our Musikmesse coverage this year? Was there anything you were hoping for that didn’t happen? Anything we’ve missed? Let us know in the comments. 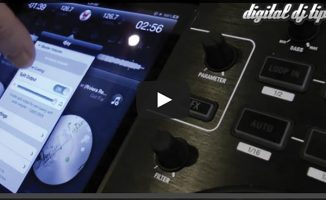 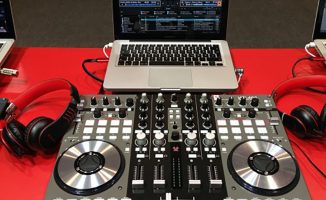