I’ve recently come up with a term to describe the workflow of many novice digital DJs, who find themselves spending half of their time frantically looking for the next track to play, and the other half attempting to mix it into the current one using the sync button. I call it “select-sync” DJing. Maybe you’ve found yourself in exactly this position at some point, and if you have I don’t for one second blame you – digital DJing makes reaching this point so easy, but can also make it hard to move past it.

So today I want to explore why so many new digital DJs fall unwittingly into the “select-sync” trap, and offer some suggestions as to how to move past it.

Now don’t get me wrong: Digital DJ gear has given millions the chance to feel what it’s like to be a DJ, and even to play in public – and unlike many people, I think this is a great thing. But if you want to get on in DJing, you do need to move past “select-sync” – and today I want to give you some practical ways to do it.

1. Dealing with the “select” part

The reason so many DJs spend so long staring at their digital collections desperately trying to find another song to play (the “select” part of the above) is that they have far, far too many tunes in the first place. You need about twice the number of tunes you’re planning on playing for any given set, as a rule of thumb. (If you’re a mobile DJ, you need more, but I’d expect mobile DJs to be well organised anyway as the number of tunes you need to carry demands it.)

If you have a playlist with roughly twice the number of tunes in it than you need, a couple of things happen.

Firstly, you’re forced to spend a lot longer before the gig planning out that playlist. (What should I take? What should I leave out?) Secondly, you start to spot associations, favourite mixes, and natural DJ progressions through those tunes, which means they “jump out” at you when you’re playing.

Ultimately, this means you spend far less time randomly browsing through piles of unsuitable tunes hoping inspiration will strike, and get more time to do what you really should be doing: Watching the crowd, working out the very best tune to play next, and mixing. Double win!

But wait: For that to happen, we need to deal with the “sync” dilemma, too.

2. Dealing with the “sync” part

This is the part where the hapless digital DJ, without really knowing what’s going on, tries for a minute or two to mix into the chosen tune from the old one using the sync button, hoping at some point it’s going to sound good in his headphones, so he can complete the mix.

The sync button can hide a multitude of sins. Because it does a (normally) very good job of snapping two tunes together, new DJs can feel that if they can follow one or two easy-to-learn rules when using it, it’ll basically mean they can’t go wrong. But body language gives the game away: Glued to the spot and the screen, a slave to the controller and waveforms, the “select-sync” DJ is not confident, certainly not dancing and often not really having fun. Engaged with the crowd? No chance. It gets worse. For many types of music or even individual tracks, sync really doesn’t work very well in the first place. What this leads to is DJs starting to avoid the tracks they feel the sync is going to struggle with, and thus limiting not only the quality of their mixes, but also the breadth of music in their sets.

But I also believe that DJs who rely 100% on sync ultimately are missing out on a lot of the fun of DJing! DJing is about programming music to suit an occasion and then performing it with a bit of flair. If you believe loading a track, hitting sync, and gingerly mixing it in is how this is done (and the only way this is done), you’re missing the point by quite a wide margin. Ten years ago, remember, “sync” didn’t exist.

The good news is that just realising that mixing isn’t the most important part of your job, but that great music carefully selected is (and sometimes? Sod the mixing!) mean’s you’ve already won half the battle.

Easy techniques for escaping the “sync” button
So how can the novice DJ achieve good mixes without sync? There are lots of techniques available to you. You can practise “slamming” the next tune in at the right time, going straight from one tune to the next. You can drop the new tune in at a complementary beatless section. You can wait for the fade on non-dance music, and drop the new tune from the off. You can leave gaps. (Yes, that’s right – gaps. Done properly, a gap in a DJ set has immense power. Some of the most exhilarating moments I’ve ever seen in night clubs is where there’s been a power cut and the music comes back on. Smart DJs remember this stuff and use it!)

If using any of these techniques – none of which requires you use that elephant in the room, manual beatmatching, you’ll notice – means you can play the exact right tune for now that you might otherwise have avoided, it’s usually going to be better than being enslavened by your regimented “sync” style of mixing.

So you should at least try to do some of these things sometimes, rather than taking the easy road and just syncing in another bland, same-as-the-last-one tune.

How to move way beyond “select-sync”

So a DJ with a carefully chosen, manageable playlist, who still relies on his sync button a lot of the time but is prepared to mix it up a bit just to keep things interesting when the next tune requires it, is already moving past “select-sync”. Why? Because he’s now giving proper prominence to the most important of what I call the “timeless skills of DJing” – tune selection.

But what are the other “timeless skills of DJing”, I hear you ask? Well, for me, the biggest one is what I call “jogwheel literacy” (it would have been “platter literacy” in the vinyl days, except it was taken as read that everyone could do it).

“Jogwheel literacy” is getting used to the idea that those two things under your left and right hands “control” the music, and they’re there to stop the music controlling you! Jogwheels are your key to getting those carefully chosen tracks to do what you want, rather than you feeling tied down, scared witless, by the playing music.

“Jogwheel literacy” comes naturally when you practise and master various DJ techniques, including manual beatmatching and scratching. But a good way to start on the road to really using the jogwheels as was always intended (remember, the manufacturers of your DJ controller have gone to great lengths to make them feel as much like vinyl as possible), is to learn to cue manually.

Learning to cue manually
Next time you’re practising, try this. Still use sync to get the tunes at the same BPM, but then, disengage it. Now, instead of using a cue point and the “play” button to start the new tune playing, use the jogwheel to navigate to the beat you want to start the next tune on, and “throw it in” using your hand. You do this by having the new tune playing (ie the play button has been pressed) but temporarily held at that first beat. It’s easy: just touch the top of the jogwheel in “scratch” or “vinyl” mode and the tune will wait for you to release it.

When you’re ready, you “throw” the tune by hand (let it go with a slight clockwise “push”) to start it playing. It’ll probably be a bit ahead of or behind the other tune, so you use the “nudge” functionality of the jogwheel (ie the plastic edge rather than the metal top on most controllers) to pull the beats into time. You can look at the waveforms to help you to do this – that’s fine.

Only now should you re-engage sync, if you want; the point is to learn to “drop” the tunes by hand rather than by button, and to get them properly in time by nudging them manually. Do this for a whole set and by the end, you’ll be more comfortable using the jogwheels for cueing than practically all “select-sync” guys will ever be. The best bit? It’s the first step to a whole world of manual techniques…

Once you’re prepared to take even a little manual control back over your music, and to think outside the “synced infinite playlist” style that select-sync DJs are trapped in, you’ll find yourself naturally wanting to take it further. Of course, fully manual beatmatching is the big one to learn, but it can seem so daunting to the beginner – and you’d be forgiven for falling back on the old “but if the sync button can do it, why should I learn to do it manually?” argument.

Recently, though, we realised there’s another path out of this. We’re about to launch a video series called Scratching For Controller DJs, which has given us a lot of contact with beginner-to-intermediate controller DJs just like you.

And it turns out that scratching teaches you a whole load of the above skills, “by the back door”. Learning to scratch of course teaches you about “jogwheel literacy”, big style – and excitingly, that takes you a lot closer to being able to manual beatmatch. But more than that even, it teaches you to not be scared about making obvious cuts and changes in your music.

In a way, it’s the opposite of the rather apologetic “select-sync” style of DJing: If “select-sync” is “see if you can spot my mixing!” (answer: no, not most of the time, but that’s because we’re asleep… 😉 ), scratching is saying “I have control over these tunes, and they’re doing exactly what I want them to do, so be prepared for some pretty bloody awesome song choices as this night progresses!”

Watch out for Scratching For Controller DJs soon, but meanwhile, if you’re one of the DJs who does sometimes feel stuck in “select-sync”, hopefully we’ve given you some food for thought as to how to start improve things for yourself – and having a little more fun with your DJing at the same time.

Do you recognise the phenomenon of “select-sync” DJing? Did you ever find yourself DJing this way when you were building up your digital DJ skills, and if so, how did you find a route out of it? Please share your thoughts in the comments. 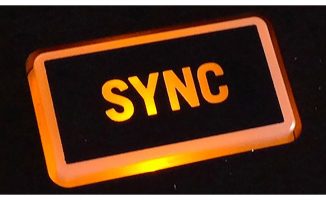