Denon DJ has today officially announced a complete ecosystem of pro DJ gear and software including the flagship SC5000 media player, signalling a comprehensive assault on the commercial DJ booth – a space that has, of course, been dominated by Pioneer DJ for more than two decades. Read on for full details.

We actually got to play with all of this gear in a private preview a few weeks ago, so here is a closer look at each of the items released today and our initial thoughts. Of course, a full review of all these items is coming as soon as we can bring it to you. We’ll also post a gallery of sneak pics we took when we were ensconced in Denon DJ’s secret den just before Christmas…

This is the big one: A player which feature-for-feature broadly matches Pioneer DJ’s flagship CDJ-2000NXS2 model, and in many ways moves past it. The biggest new feature for us is that SC5000 can analyse music on the fly, meaning DJs who like to throw a load of tunes onto a USB stick and “just play” can now do so with all of the benefits of pre-analysed music, such as key detection, beatgridding, waveforms, sync and so on. Network four of these together and you’ve got a powerful system indeed.

Apart from that, the SC5000 Prime has a very smooth, high res touchscreen that is akin to the quality of, say, iOS as opposed to that seen until now on DJ gear, and it has eight RGB performance pads of the type that are now standard on DJ controllers but haven’t until now made their way to a pro media player. A gimmick – but a nice one – is the displaying of release artwork in the middle of the jogwheels. A notable omission, however, is a CD slot – a bold move (think Apple/headphones socket). traktor and Serato compatibility is promised.

Finally, something that users of four-channel DJ controllers will be completely au fait with, but which has never appeared on any media player to date: Each deck has two “layers”, meaning two SC5000s can control four “decks” simultaneously. IT seems amazing that no pro DJ media players have had this till now. you could theoretically DJ a full set with only one of these!

Our friends over at DJ City managed to get a quick play with this, so to find out more, take a look at Mojaxx’s first look video here:

If the SC5000 is a direct assault on the sector of the market that buys the Pioneer DJ CDJ-2000NXS2, then this is Denon’s gambit for the DJM-900NXS2 space. Designed to pair aesthetically and technically with a pair of SC5000s and/or a pair of PL12 turntables (see below), it is a four-channel club mixer, that as well as offering sweep and BPM-based FX, can link with the SC5000 Prime using the “Engine Connect protocol” to share beatgrid and time information with the mixer to align FX LFOs.

“Denon DJ’s expressive ‘Flex-Fader’ crossfader adds diverse physical performance flexibility, whilst the all-new frequency controlled ‘Band-Isolation’ brings even more sonic manipulation possibilities to creative DJs”, says the company – we look forward to investigating exactly what this all means when we get our hands on one…

As exclusive previewed several months back by Digital DJ Tips, this turntable is interesting in that it appears to have been engineered from the ground up by Denon DJ. This is unlike practically every other turntable out there, all of which are not only modelled more or less directly on the Technics 1200/1210 aesthetic, but actually come from the same factory, no matter what brand you buy.

The PL12 boasts direct drive (of course) featuring the highest torque of any turntable, according to the manufacturer (you can also switch it to lower torque to approximate that of the Technics turntable family), and furthermore has a gimmick in that you can adjust the colour of its built-in LED platter lighting, as shown in the video we posted from ADE last autumn.

Just like Pioneer DJ’s gear works with its own Rekordbox software, the SC5000 media players are designed to be paired with Engine Prime. This is the latest version of Denon DJ’s Engine software, which was last revamped last year when the company launched the MCX8000 DJ player/controller. It is a desktop utility that lets DJs import music from folders, iTunes, or – uniquely – Serato DJ, where cues etc are all preserved.

“Written from the ground up, It’s an entirely new digital music librarian ecosystem, that completely solves the issue of identifying, locating and accessing your desired music files quickly” says the company. Naturally, the application is “optimised for use with Denon DJ’s new SC5000 media player and X1800 Prime four-channel mixer”.

As I mentioned, we’ve had a chance to play with this gear, and frankly, at least as far as the media player goes, the pics don’t do it justice. It is extremely high quality kit, built in battleship-style, and feels like basically a computer with a DJ controller built around it, on a single piece of hardware. What I mean by that is that the OS is super snappy, the graphics on the responsive touchscreen are high res and completely smooth, and the controller-like features – especially the performance pads – make you forget you’re not using a high-end DJ controller sometimes. It’s powerful indeed.

The big advantage to all that power, though, isn’t the snazzy record label graphics or the snappy OS. No, the big thing is the quick analysis of music straight from USB, on the fly. Many DJs still DJ in just this way (way more than controller DJs tend to realise, for instance), and Denon DJ is surely hoping that if word gets around the superstar DJs who really don’t care for software analysis, beatgridding and all that stuff but who will surely be blown away by having proper waveforms, grids, sync and key detection without any change in workflow. The risk, of course, is that some of them may also want to use CDs – which is a no way Jose with the SC5000s.

Business-wise, this all sets up a fascinating battle. If anyone can challenge the dominance of Pioneer DJ, it’s surely the monolithic inMusic group, of which Denon DJ is a part. When inMusic bought Denon DJ a couple of years back, many predicted the demise of the Denon DJ brand, but frankly none of this would have been possible under the old stewardship. Ultimately for DJs, having a couple of big players at the high end of the market has to be a good thing, as it’ll speed up innovation and give people more, better choices.

That’s not to say the road is going to be easy for Denon DJ (Pioneer DJ has learned an awful lot about what DJs really want, and has an overwhelming market share right now) – but the fact that a complete ecosystem of products has been launched in one go surely signals that Denon DJ means business. It’s shaping up to be an exciting year in DJ tech, and we’re less than two weeks in…

So, what do you think of the new gear? Are you considering buying Pioneer but having second thoughts now you’ve seen this? Do you think Denon DJ will carve a space for itself, or is it going to find it too hard? And who do you think this gear will appeal to the most? Let us know your thoughts in the comments. 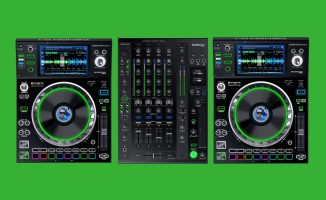