The International Music Summit concluded this past week, with industry folk and dance music aficionados flocking to the shores of Ibiza for the annual gathering. Presentations on the current state of play in the dance music world by DJ/producers and industry head honchos were on offer for the full three-day conference, along with the yearly IMS Business Report, which takes a detailed look at the economics of dance music.

In this article, we pick out 10 of the most important points from the lengthy IMS Business Report charts to get you up to speed with what’s happening in the world of dance.

1. Dance music continues to surge in popularity around the world 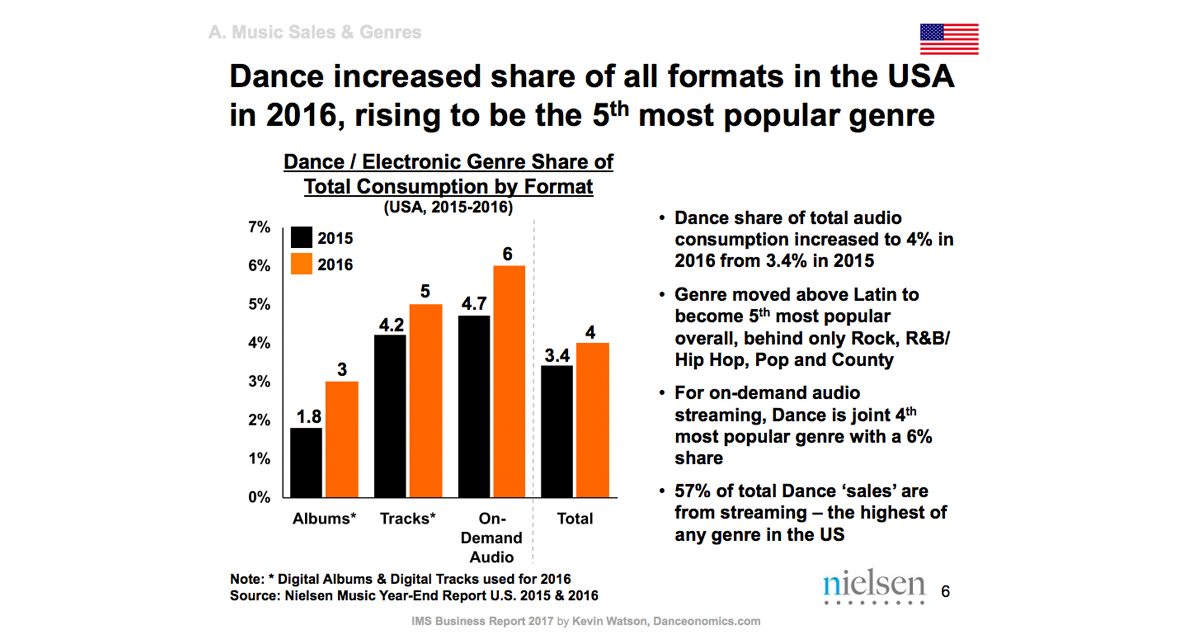 Despite news these past handful of years that EDM has peaked in the US and that the “bubble has burst”, dance music continues to grow in popularity, particularly in Latin America and Europe. In Germany, sales of dance music reached an all time high in 2016, and it’s the most played genre of music on French radio in 2015.

2. Beatport is alive (and profitable) 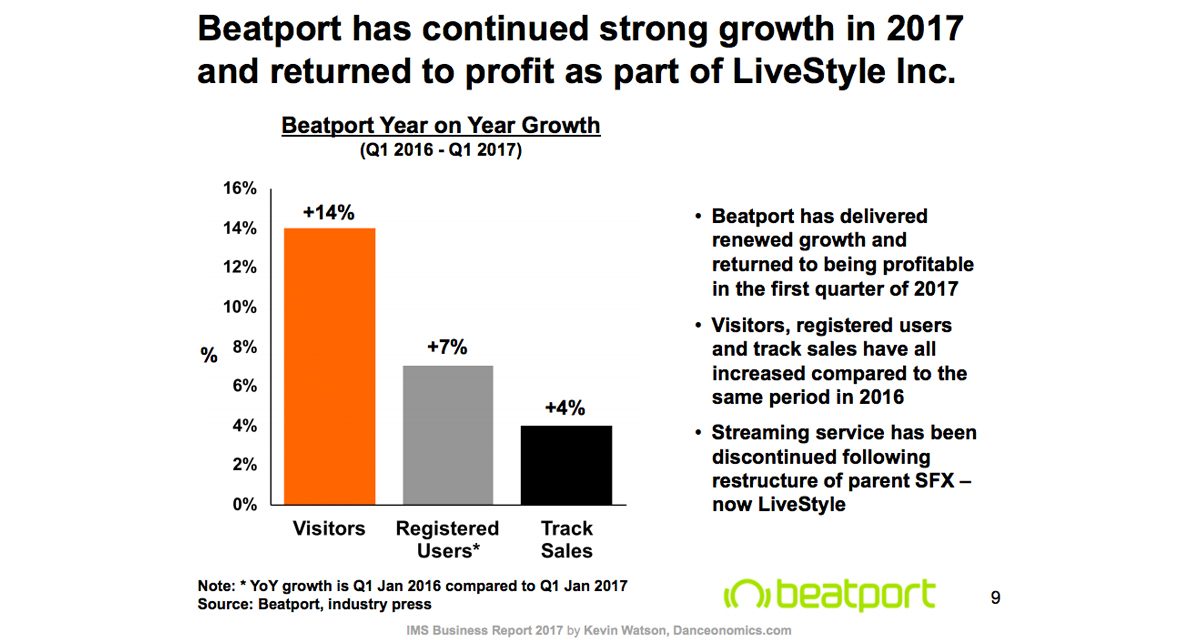 Beatport was in trouble a few years back because its parent company SFX declared bankruptcy, but it has bounced back and is now profitable, minus its ill-fated music streaming app of course. That’s fine with us – lots of dance music to be had on other services like Spotify, Apple Music, and YouTube.

3. Beatport sold more techno than any other genre 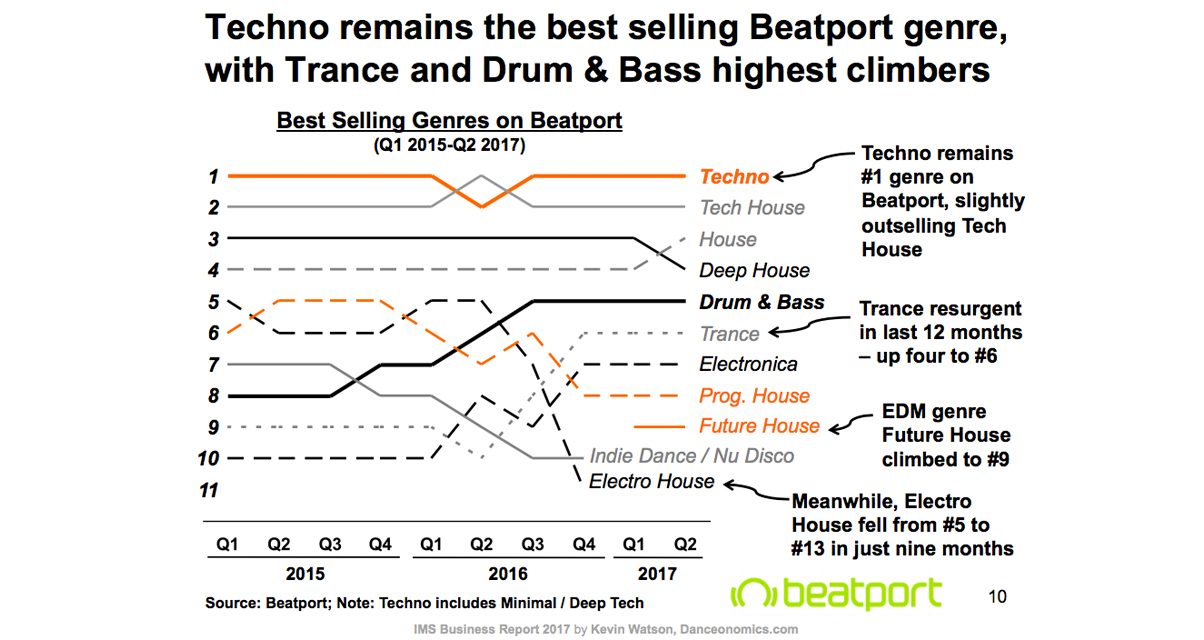 Techno is still a huge draw on the online music store, claiming the top spot in overall sales. Electro house and indie dance have fallen from favour for Beatport customers, while more traditional styles like house and trance have climbed the sales chart. Drum and bass is also high up, claiming the top five spot in the list.

4. House is the most played genre in KUVO-equipped DJ booths 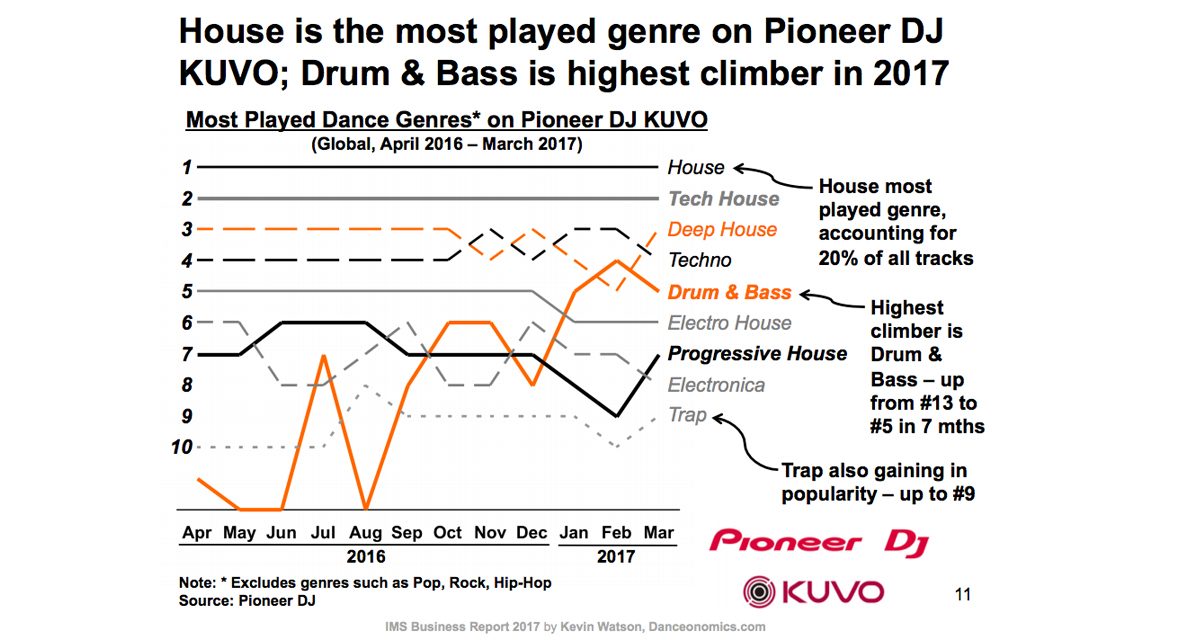 Pioneer DJ introduced the KUVO system over two years ago. KUVO keeps track of what tunes are being spun by DJs in KUVO-equipped CDJ set-ups around the world, and we’re starting to see the data come in for its first year of use – house music dominates these clubs, and drum ‘n bass is showing sharp growth. Is a jungle renaissance on the cards?

5. Instagram is the social media platform for growth, as far as DJs are concerned 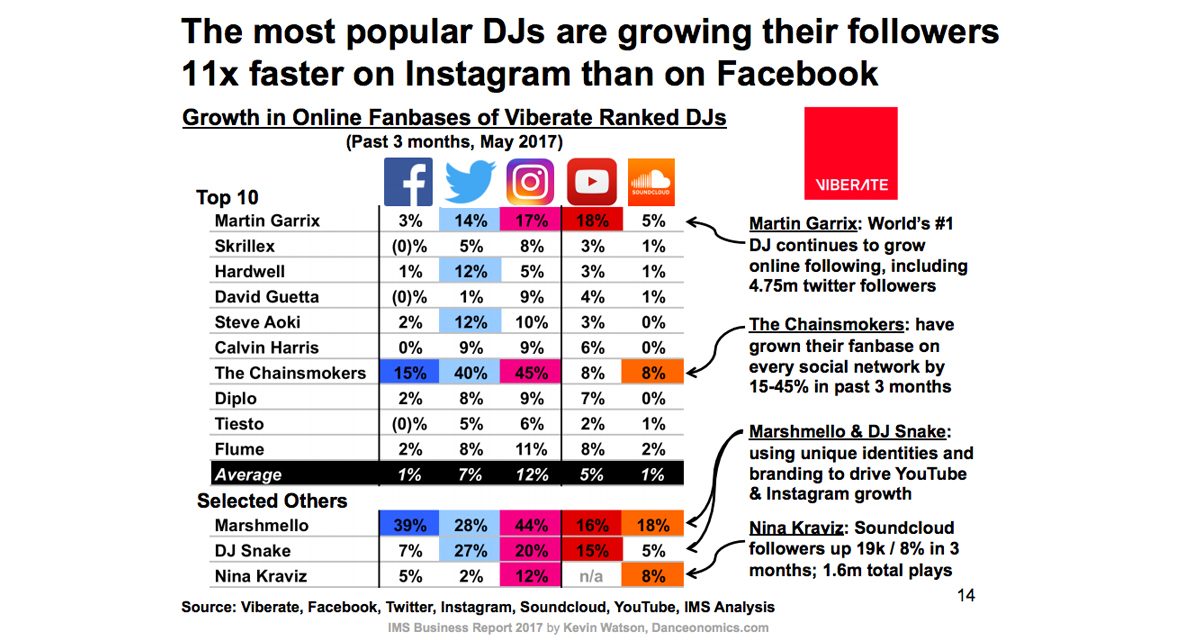 Here’s a major piece of news: The big names are growing their followers on Instagram at an exponential rate compared to Facebook. This could mean two things: followers prefer Instagram when it comes to engaging with visual content, or the Facebook Pages of these popular DJs are starting to mature and reach saturation. Whatever the case, you have a better chance of growing your followers faster on Instagram compared to Facebook – at least at the current algorithm. 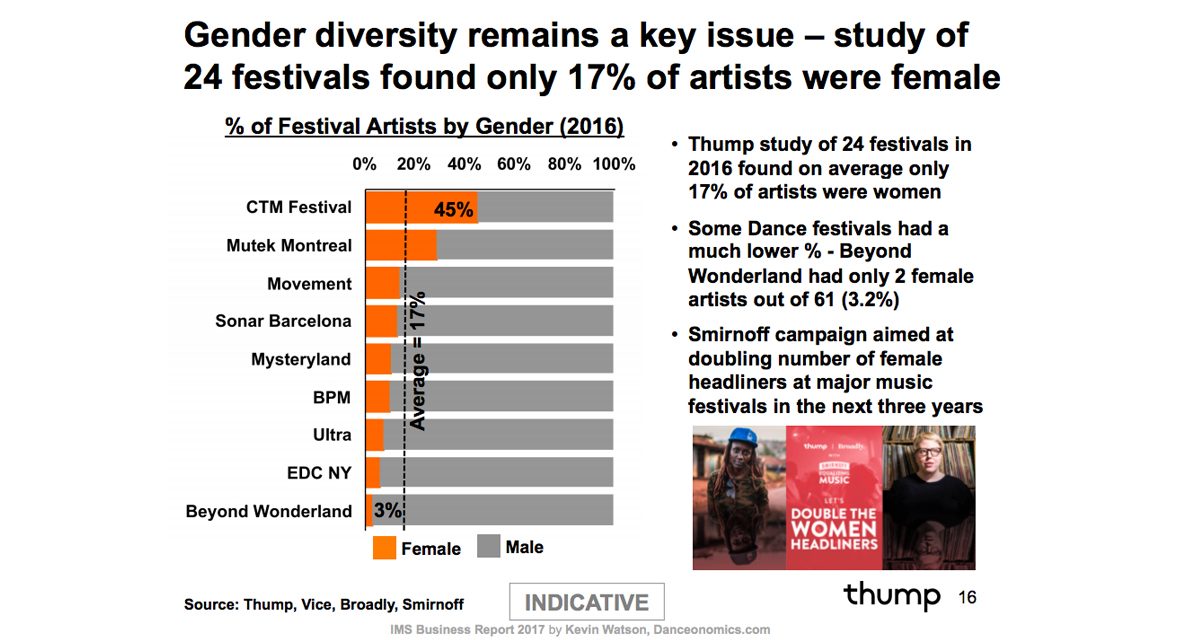 Dance music and club culture is all about diversity. There is a lack of female DJs in a huge majority of electronic music festivals, and there is no reason why more women shouldn’t be on more rosters. There are so many amazing DJs that should be high up on a festival’s roster: The Black Madonna, Nina Kraviz, Ellen Allien, Hannah Wants, Alison Wonderland, Magda, B.traits, Smokin Jo, Sister Bliss, Annie Mac, the list goes on… 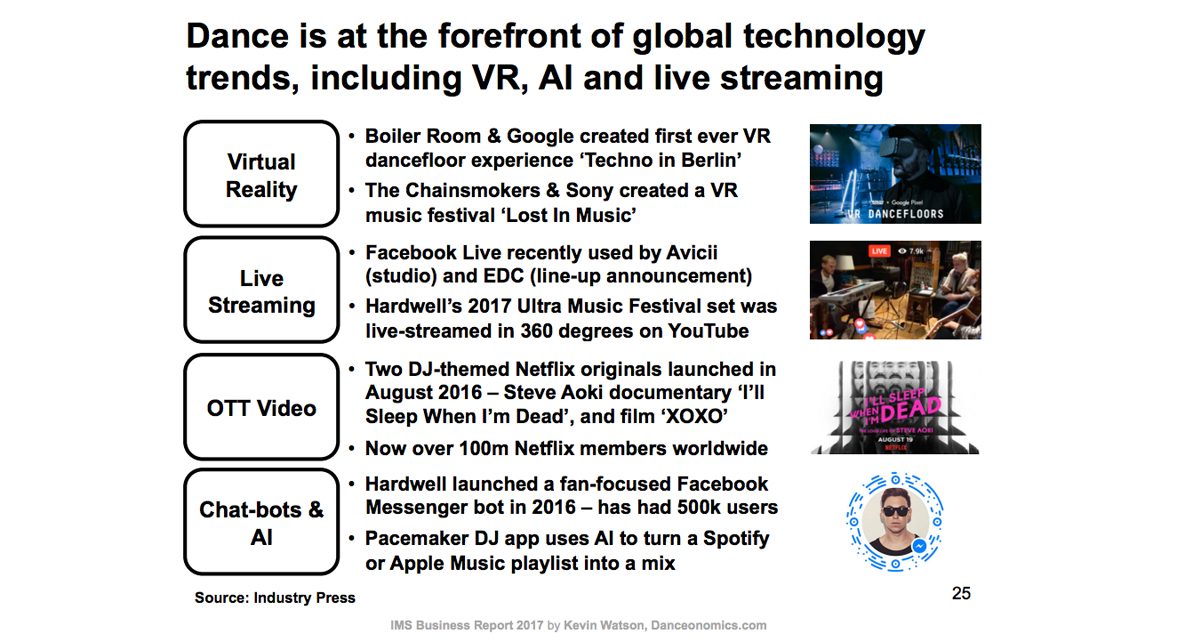 What’s next in the digital realm for DJs? Virtual reality has been a Silicon Valley buzzword for the past few years, and DJs and promoters have only begun to dabble with this technology – Boiler Room is one of those which have experimented with a 360 view of a performance. Artificial intelligence and big data are also hot topics that could be potentially used for both good (eg Spotify’s Daily Mix, chatbots that fans can interact with 24/7) or pure, pure evil (eg computers replacing DJs… imagine the DJing equivalent of IBM’s Deep Blue computer that beat chess grandmaster Gary Kasparov. Say it ain’t so!)

8. The DJ Mag Top 10 keeps getting younger and younger 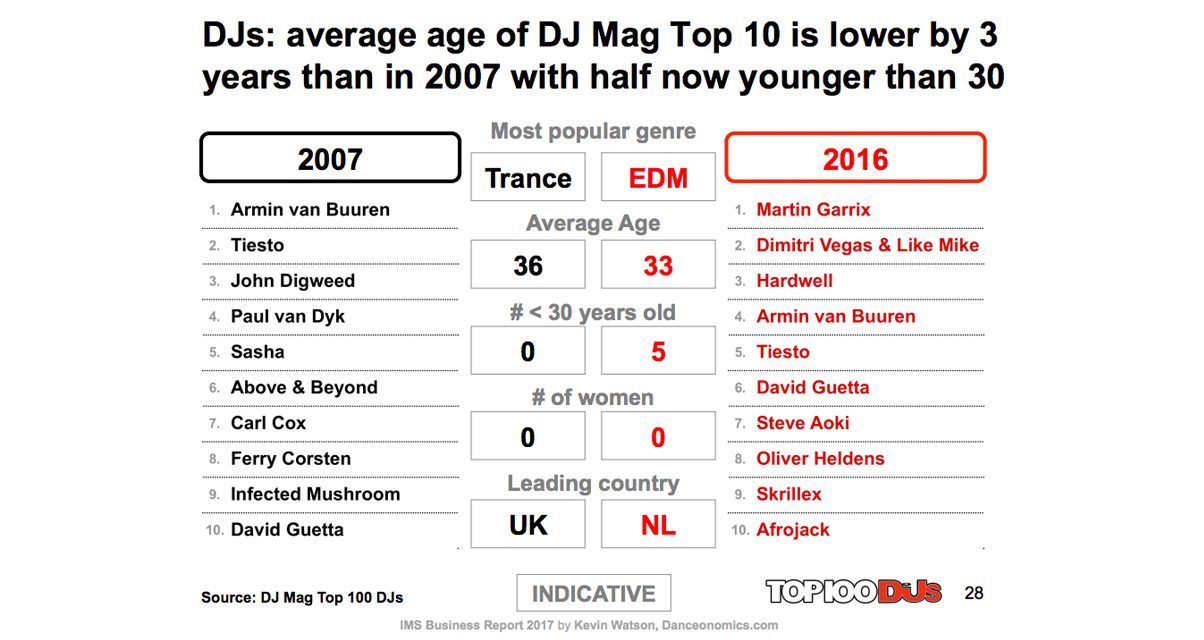 While I don’t agree with the sentiment that DJing is a “young person’s game” – the best producers are well in their 40s and up – the DJ Mag Top 10 seems to be just that. A large part of it has to do with the DJ Mag Top 100 being a voting contest, so DJs with the largest social media followings (ie social-savvy millennials) generally place highest. I’d love to see Carl Cox take his rightful place at the top spot, but if historic data were to be followed, this is highly unlikely.

Also, where are the women?

9. People bought more DJ gear than guitars in the US 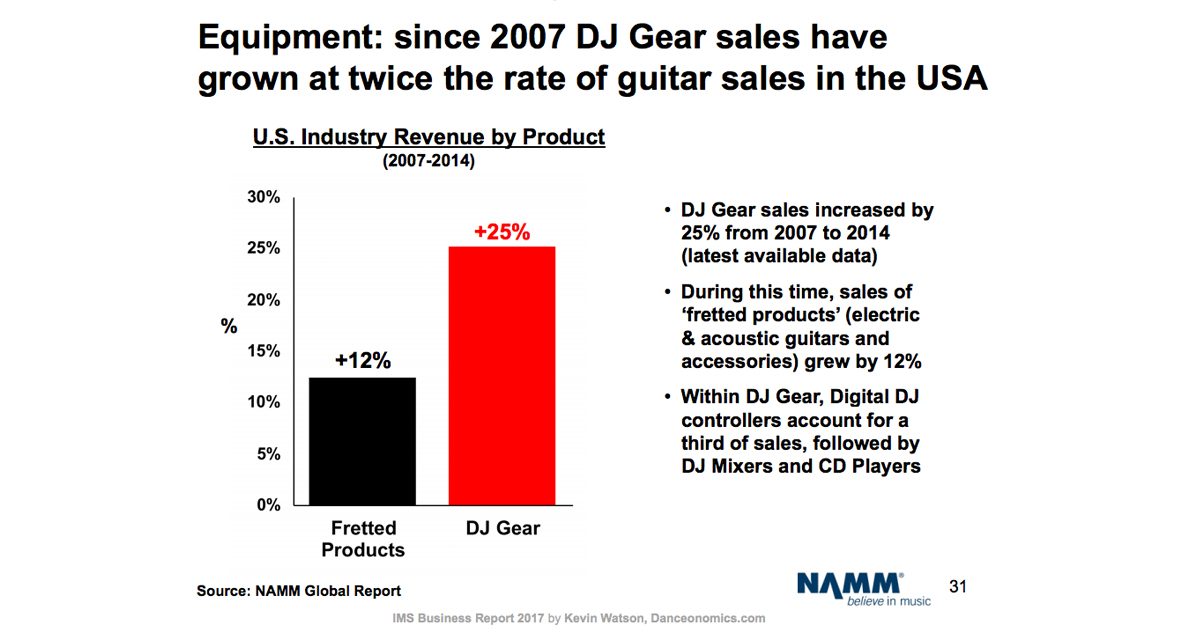 Remember when DJ magazines in the naughties bragged that more turntables were sold than guitars in the UK? Well, that trend seems to have made its way across the pond, with digital DJ gear besting acoustic and electric guitars as the most bought musical instrument in the US.

10. The Chainsmokers are catching up to David Guetta, and could become a “bigger” act than him… 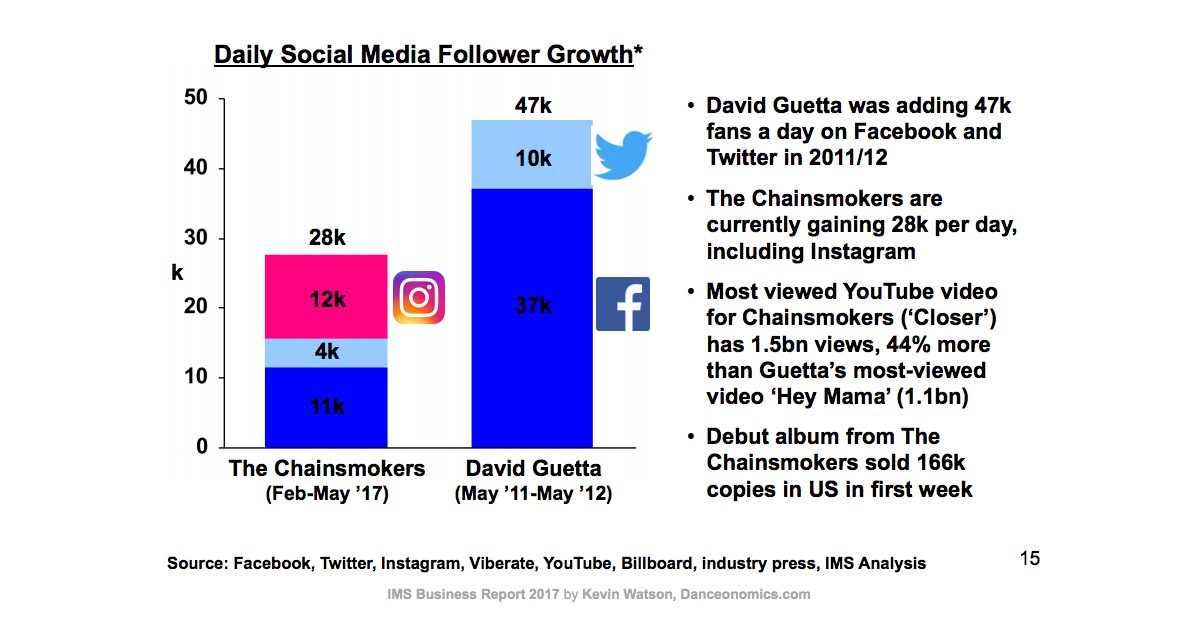 … but still probably not bigger than The Beatles (and thusly, Jesus). 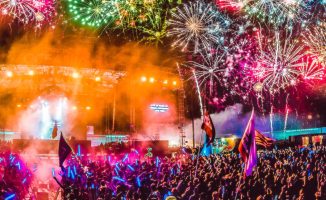 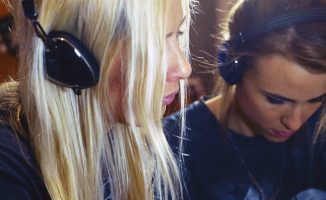 Interview: Eli & Fur On Taking Your DJ Career To The Next Level 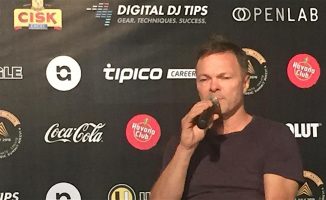