If you don’t have thousands of dollars for studio time in the most popular recording studio in the history of pop music (and a flight to London) this might be the next best thing: Waves, creators of industry standard plugins for producers, just announced Abbey Road Studio 3, a monitoring plugin for your DAW that recreates the acoustics of the Abbey Road Studio 3 control room for your headphones. It aims to let you hear how your project would sound like if you were inside the storied control room with millions of dollars worth of gear and precision acoustic treatment.

The plugin does this by modelling the control room’s stereo and surround sound stage, so that means when you’re wearing headphones and you’ve got the plugin enabled, you hear your music as if it were being played back inside Abbey Road Studio 3’s control room. You can even pick from three sets of virtual stereo speakers as well as 5.1 surround and even 7.1 surround set-ups. This gives you multiple monitoring options to let you hear how your mix sounds across different speakers.

We’ve talked about this acoustic modelling technology, called Waves Nx, in the past. It does two things: it simulates a playback environment in your headphones, such as a studio mixing room, and it tracks your head movements to simulate how you would hear sound coming out of monitors when you tilt your head. Abbey Road Studio 3 kicks things up a notch by doing both of these, but this time emulating the acoustic environment and response of the famed control room. We have yet to try it out so we can’t give you our recommendation just yet (watch out for our review of it soon), but we have to admit it’s a cool idea at first blush.

Check out the promo videos below.

• Abbey Road Studio 3 is available now for US$99. Check the Waves site for more details.

What are your thoughts on this plugin? Think it’s useful, or just a gimmick? Let us know in the comments. 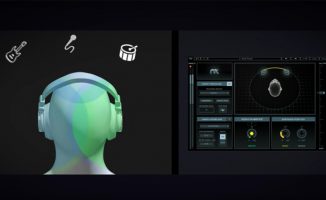 Kickstarter: Waves Nx Turns Your Headphones Into A Mixing Studio