Photos and a video are doing the rounds which seem to show a new scratch mixer from Pioneer DJ, which looks very much like the Pioneer DJ DJM-S9, but with the addition of a screen showing waveforms.

If true, it means Pioneer DJ will soon be releasing a mixer designed to take on the Rane Seventy-Two, a scratch mixer designed for Serato DJ Pro, that also features a similar screen.

The rumours started with Pioneer DJ itself releasing a teaser image, stating that 15 October is the release date.

As what is shown is clearly a DJM-S9-type mixer, people (including us) started Googling “DJM-S9 replacement” and so on – and we stumbled over the YouTube video below, which is now rapidly circulating on tech sites, social media, and Reddits:

What are we seeing here?

So let’s talk about the screen first. In the case of the Rane mixer, the screen shows vertical software waveforms from Serato DJ Pro. You’d expect that to also be the case with any new Pioneer DJ mixer, because the DJM-S9 on which this unit appears to be largely based was also designed for Serato DJ Pro.

However, we’d expect the mixer to also work with Rekordbox DJ and to display waveforms from that software too, making it the first such device on the market that can do so.

It’s not just about the screens, though. If this is indeed a DJM-S9 MkII, note that the filter and EQs are all in a line (which is an improvement), and Pioneer DJ also seems to have fixed the poor layout of the pad assign buttons.

The most intriguing suggestion (which we do not think is true) is that this could in some way be part of a standalone system with Rekordbox. Another idea is that Pioneer DJ wouldn’t discontinue the DJM-S9, rather, have this version on sale alongside it, to give an option with a screen for DJs who want it.

And also, will they have put a cheeky USB hub on the back, knowing it is likely to be used with Rane’s Twelve turntable controllers (as seem in the right-hand vertical image in our main pic)?

Whatever this is or isn’t, looks like we’ll find out on 15 October. The mixer is labelled the “DJM-XXX”, by the way, so no clues to the name at this stage although one Facebook post seemed to think it could be called the “DJM-S11”. 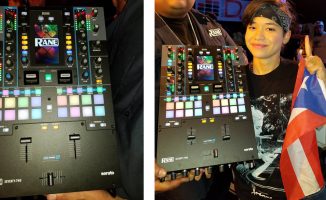