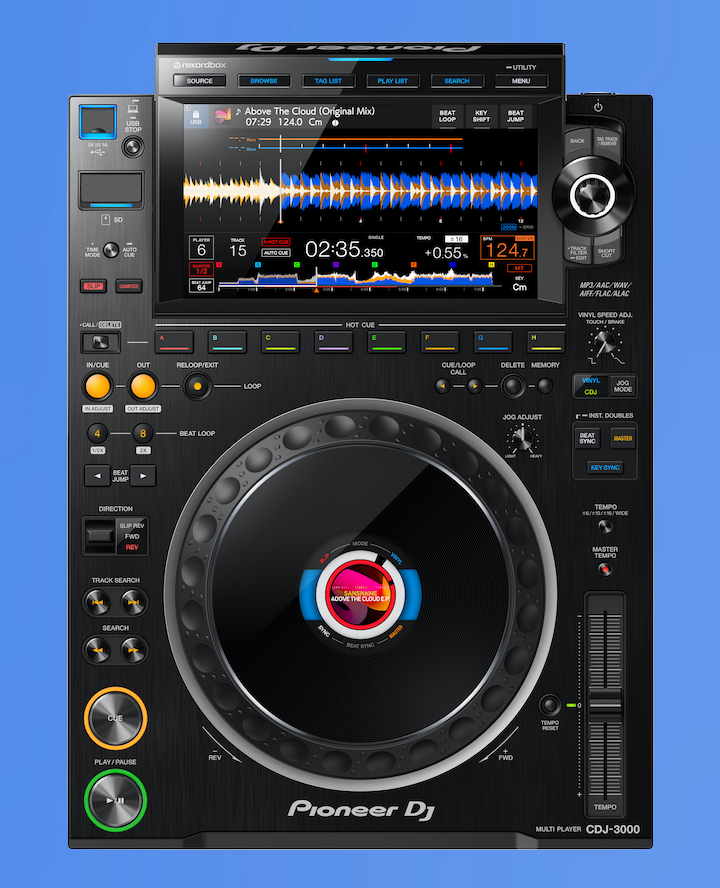 The Pioneer DJ CDJ-3000 has today been announced. It’s a new flagship multi player, and a direct replacement for the previous flagship CDJ-2000NXS2.

Instantly recognisable as a Pioneer CDJ, it nevertheless boast a host of improvements and additions, include a much bigger screen, eight physical hot cues in a new position, a new audio engine, new key sync and key shift features, new jogwheel design, and an advanced MPU – the latter being probably the biggest leap forward here, as it will allow Pioneer DJ to improve the unit’s features over time via firmware.

Other new features include beat jump, the ability to preview tracks in-player, and the ability to jump ahead to listen to parts of tracks currently playing (even on other players). The unit can also layer waveforms so you can see the waveform of a deck you are cueing in parallel with that of the master deck.

Despite its name, though, the CDJ-3000 contains no CD drive, and at launch, there is no talk of built-in streaming services or WiFi.

There is also no multi-layer control (where one unit can play two music sources) – something many people thought would be a feature of Pioneer DJ’s next media player, not least because it is a feature of rival players from Denon DJ.

Also unlike its rival players from Denon DJ, the CDJ-3000 does not analyse tracks on the fly – track analysis for waveforms, key and so on needs to be done beforehand in Rekordbox on your laptop, as before.

As a new mixer has not been announced alongside the players, Pioneer’s preferred mixers for use with the CDJ-3000s are the DJM-900NXS2 and the DJM-V10.

So that’s the headline stuff – let’s dive a little deeper into the features. 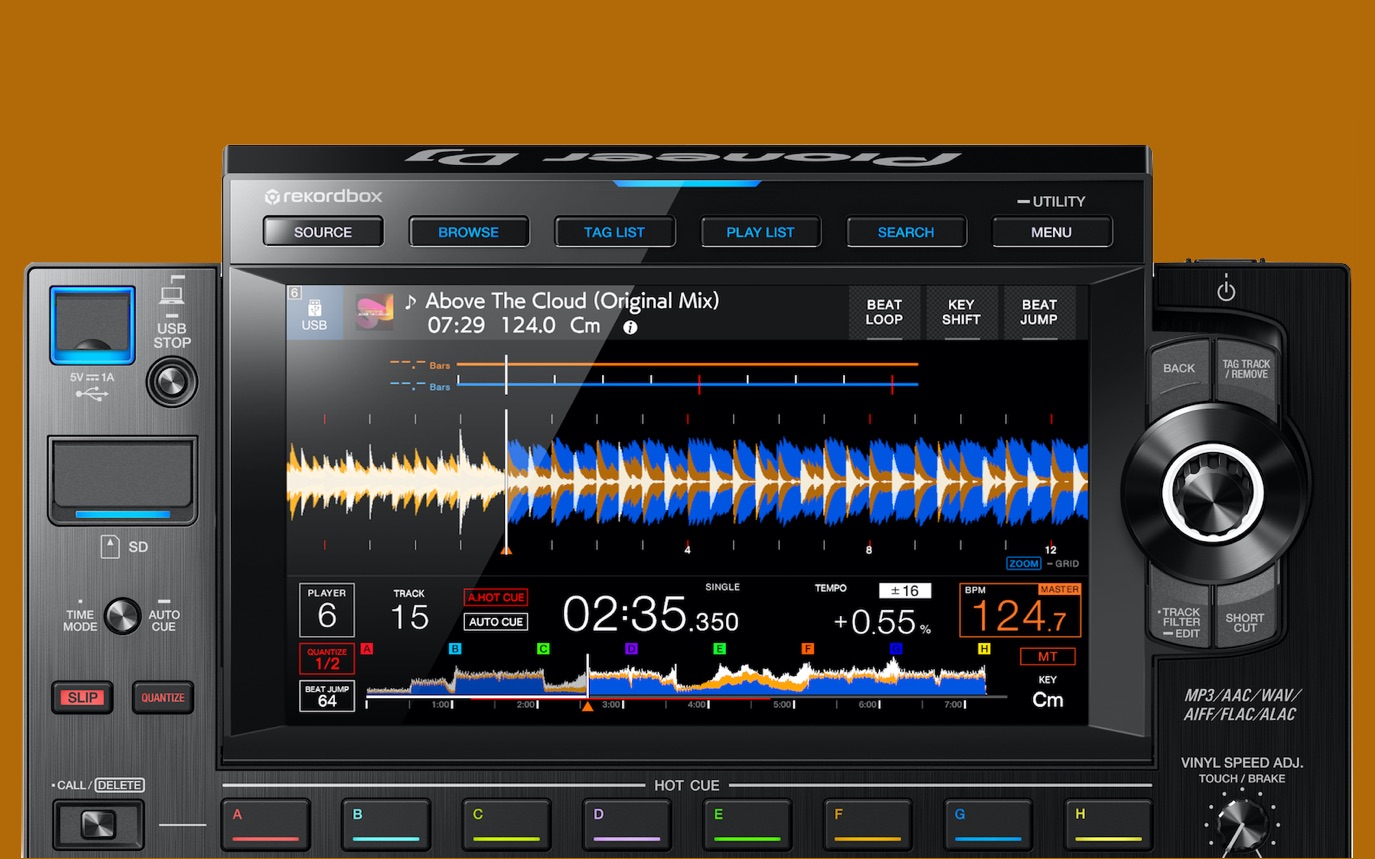 The CDJ-3000 is no radical departure, looks-wise, from the CDJ-2000NXS2, being roughly the same size and shape (a little deeper, ever so slightly wider, same height) and similar in layout. the screen and the hotcues are really the only things you immediately notice, other thank some relatively minor changes. But there is a lot new here once you start looking more closely, so here is a detailed look at the changes:

The waveforms have been improved. Now, you can also view your tracks in the same “3Band” format as used in Rekordbox, where each frequency has a different colour, making it easy to see what’s coming up in your tracks. Tracks need to have been analysed previously in Rekordbox for this to work.

It is also possible to “stack” (parallel) view your waveforms, as a unit can show you the master waveform plus also the one of a track you are cueing up on any other networked player, a feature Pioneer DJ has called “link cue”, and which works with the DJM-900NXS and DJM-V10 mixers.

In the long run, this is probably the most important feature here – the unit effectively has a computer inside. That gives great potential for firmware upgrades to incorporate all kinds of features going forward, in the same way, say, Apple can constantly upgrade its OS to add new features. This brings it into line with Denon DJ’s Prime range.

Pioneer DJ says the main advantages of this are lightning fast load times of tracks and hot cues, plus the audio features listed next…

Pioneer DJ says this is the best sound quality yet in any of its gear. All audio is upsampled to 96kHz/32-bit floating, which shows itself particularly in better quality timestretching and key shifting/sync.

Pioneer DJ is making a big thing of this, and ever CDJ-3000 ships with a “high quality” digital audio cable, which is the best way to connect the CDJ-3000 to a mixer with digital in (such as the DJM-900NXS2 and DJM-V10).

There is now a single horizontal row of eight hotcues, laid out just below the screen, replacing the four “banked” hotcues that used to be vertical on the left-hand side of the CDJ-2000NXS2.

The hot cues are colour coded, and are made of hard plastic, not rubberised. 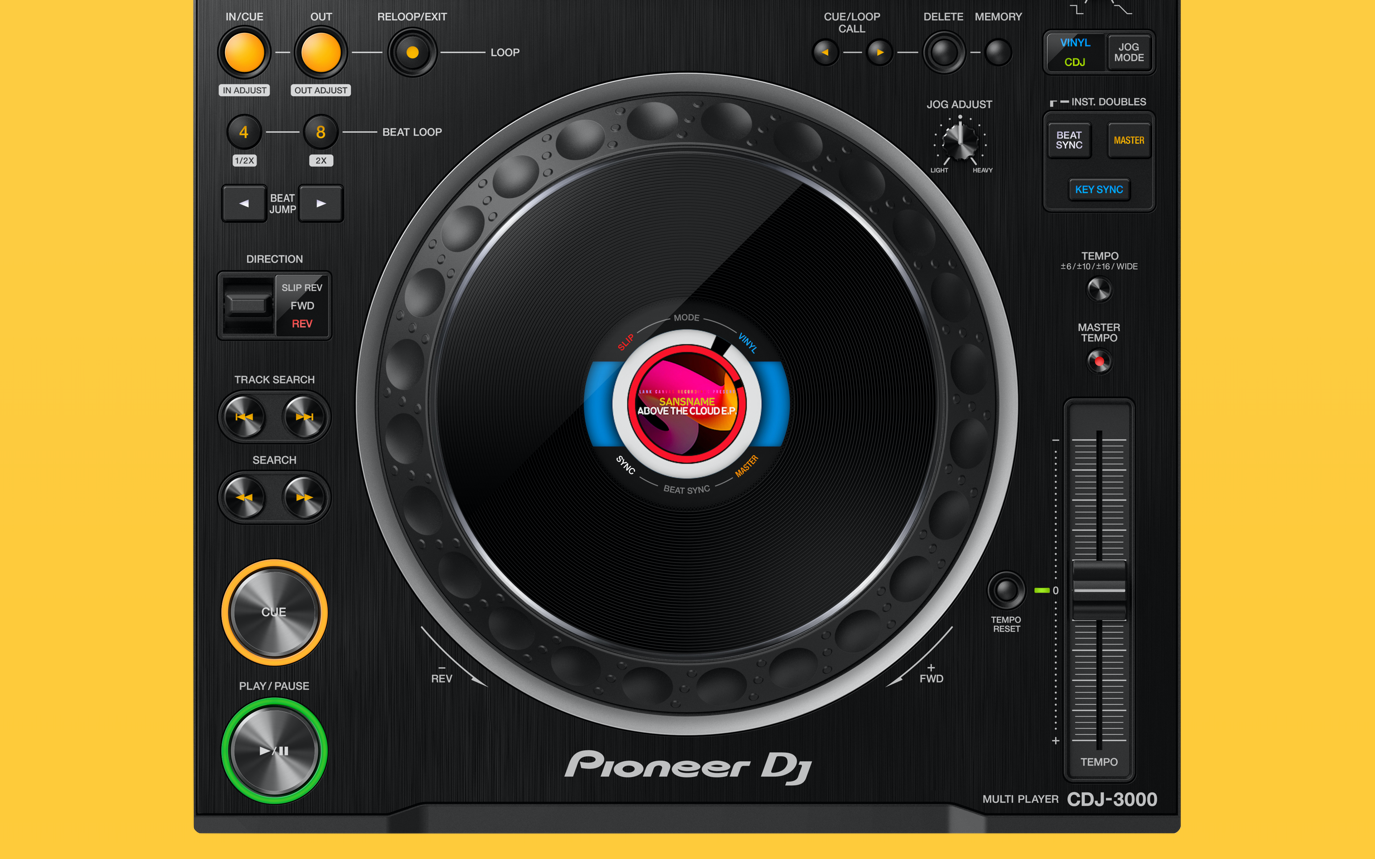 There are now beat jump buttons, adding a feature much loved by controller DJs for many years to a Pioneer DJ media player for the first time.

There is also a second auto loop button, triggering an eight-bar loop, alongside the four-bar button that’s always been there, and there’s the ability to loop by an odd number of beats too, via a touchscreen function, which Pioneer DJ is calling “polyrhythmic beats”.

The jogwheel looks similar, although it now has a grooved top rather than a smooth one; however, it is less mechanical in feel, less rattly, and more refined.

Possibly the biggest change is the new middle screen, which now apes that of the DDJ-1000, making it a considerable improvement over the previous model.

Previously, if you wanted to use Pioneer’s lighting control system, you needed to be DJing directly from Rekordbox, via a laptop.

Now that isn’t the case: You still need your laptop with you (and Pioneer DJ’s RB-DMX1 interface unit), but now you can use Pro DJ Link to connect to those items and the CDJ-3000 can send phrase information from playing tracks directly.

There is now a full aluminium top plate, and Pioneer DJ says it has redesigned the play/pause and cue buttons for more durability, and has tested them with a million presses.

The IEC (“kettle”) cable in the back is now of a lockable design, too, to help prevent accident power offs in performance.

Interestingly, they’ve still gone for the plastic finish to the screen – is this for durability against a glass option? 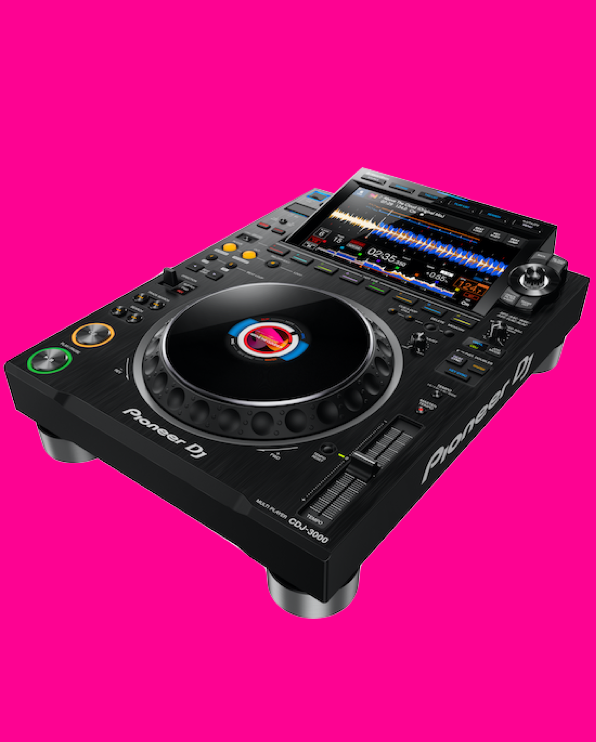 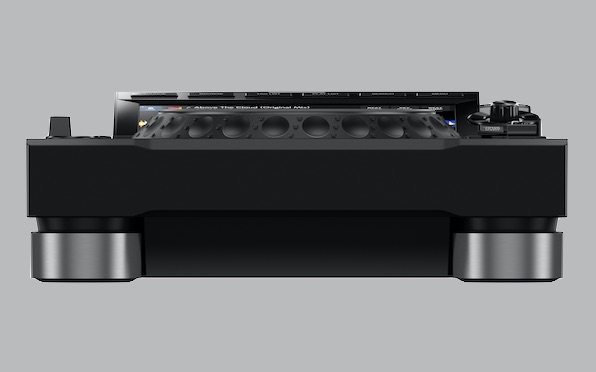 We have a full review of the CDJ-3000, including a video talkthrough, but here are our first thoughts in brief.

Pioneer DJ has been playing catch-up, technology wise, in the pro media player market, ever since Denon DJ launched its SC5000 and SC5000M models, recently followed up by the improved SC6000 and SC6000M models.

The CDJ-3000 does, in some ways, redress that balance. it has a decent screen, nicer jogwheels, much improved hot cues, a neat key sync feature (best in class – more about that in the review), and while it finally drops the CD slot, it does allow music to be played from USB, SD, attached phone with Rekordbox for iOS, and from a laptop – just like the CDJ-2000NXS2.

Its Touch Cue and Touch Preview features – for cueing from other decks and listening ahead to tracks that are currently playing – are awesome features, not seen anywhere else.

And its key sync feature is a smart bit of thinking, which (to cut a long story short) gives you a decent chance of being able to mix anything into anything, in key. It does so by counting more closely matched keys as compatible than other algorithms, and at the same time limiting the amount of transposition to two semitones. It’s something nobody has implemented in the same way before, and we like it.

There are notable omissions against the Denon DJ players, though. The CDJ-3000 is “single layer” player, meaning it can’t play two music sources at once. The CDJ-3000 cannot analyse music on the fly – you still need to analyse beforehand in Rekordbox to use its features properly. And there is no built-in Wifi, and no support for streaming services (unless you have a laptop running Rekordbox attached).

Leaving off dual layer will annoy hobbyists who would like to have two of these to control four decks, but pro DJs, clubs and festivals are used to supplying four decks and so it’s business as usual on that front – quite possibly leaving out these was a business decision to sell more units! Indeed, the new units can now work with the DJM-V10 mixer to provide a full six-channel networked DJ system – although of course, paired with the DJM-900NXS2 in a four is going to be the set-up that gets features everywhere worldwide, as per this picture: 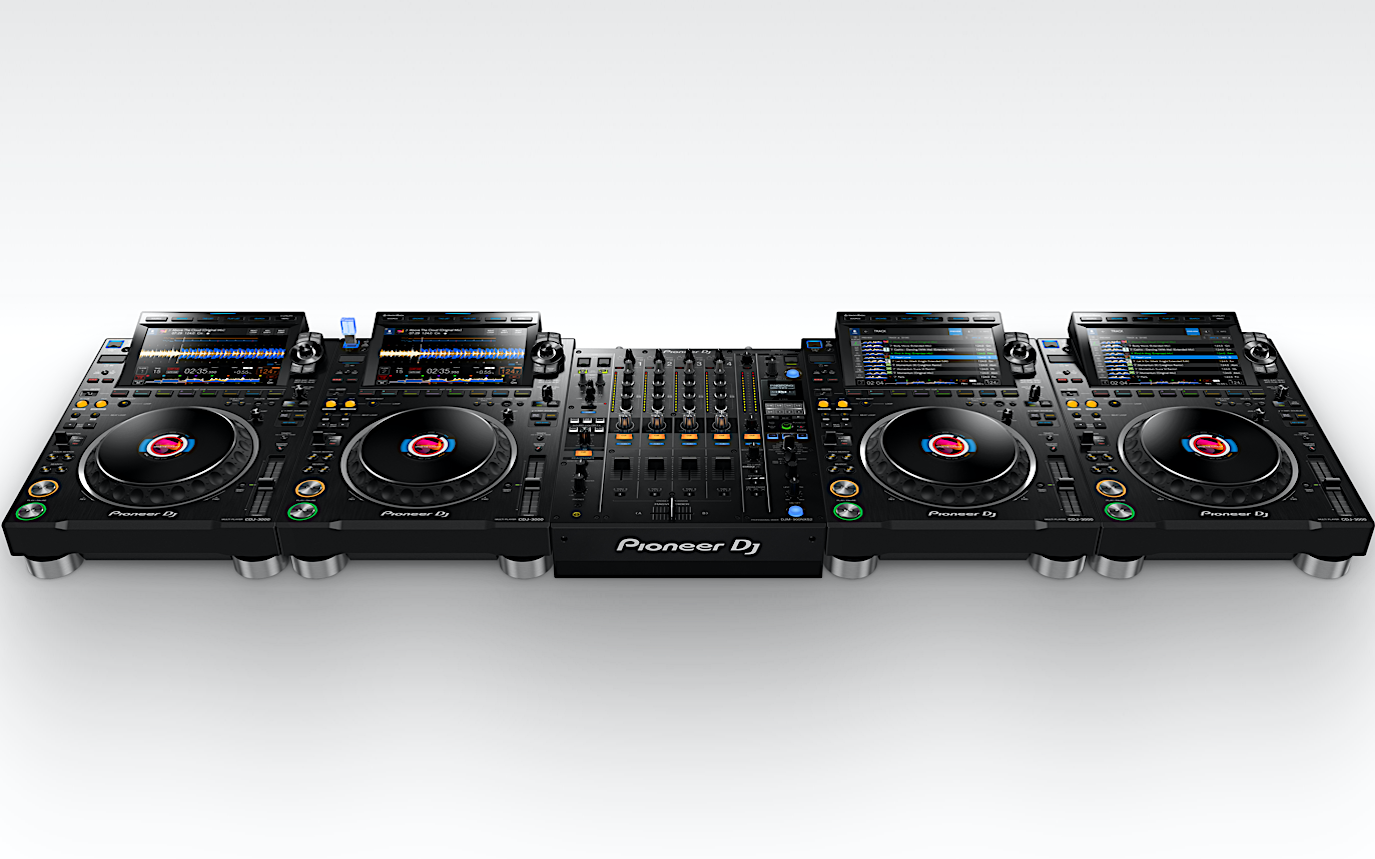 However, apart from dual layer, all of these things listed above are potentially possible to implement retrospectively. (We suspect the units do have WiFi capability, just not announced at launch – we could be wrong on this though.)

But even if not, the big omissions – standalone streaming, on-board track analysis – should be possible at some point, due to the new MPU architecture of the CDJ-3000. In this instance, what lacking as of now is probably the software engineering to make these functions work – and leaving that out at launch could have been a conscious decision.

Think about it: Pioneer DJ is primarily aiming these units at pro DJs and the club/festival market, and knows that reliability, continuity, and slow but continual improvement is what wins the day in that sector. Hobbyist DJs who can afford a pair of these (and there are many of those) may feel underwhelmed , but we suspect Pioneer DJ has made the call to make the launch of the CDJ-3000 evolution, not revolution.

By the time the unit has had its lifespan, and certainly by the time the CDJ-4000 launches in – oooh – a decade, we expect that via firmware upgrades things like cloud locker, standalone streaming and onboard analysis will have long arrived on this hardware.

So on measure, we think Pioneer DJ has done enough to hold on to its market dominance for the near to mid term.

One elephant in the room though: What a shockingly bad time it is to release club and festival gear, when the whole industry is at a standstill! Pioneer DJ will of course have weighed up that business decision – but nonetheless, maybe innovating on some of those “missing” features sooner rather than later would be a good move for Pioneer DJ, as it may just be the affluent hobbyists who become the primary market for these, at least in the short term. 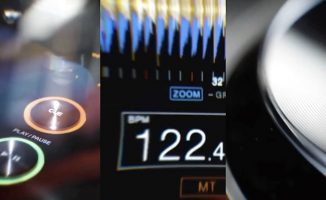 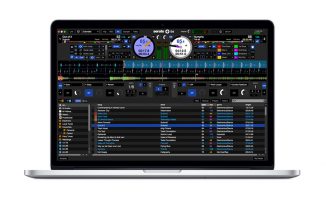 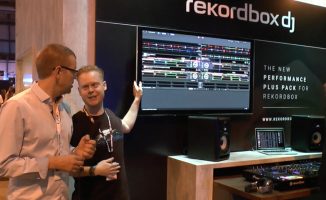