You may have heard the terms “platters” and “jogwheels” used by DJs, and maybe not even known what the difference is. But even if you do know (and we’ll get to that…), which is best? Which type of system should you learn on? Does it even matter? That’s what we’ll cover in this article.

While you’ll often hear DJs using these terms interchangeably (and even I’ve been guilty of that at times), there actually is a difference. This is it:

Why do both exist?

The original platter was the turntable, onto which you placed a record. A platter had to spin, in order to play the record. Modern-day platters such as those on the Rane Twelve software deck controller don’t need a record any more, but they nevertheless retain the same parts and “feel”.

Are these fundamentally different ways of controlling the music?

They used to be, yes. When the earliest rack-mounted CD players with built-in platters hit the market, their jogwheels couldn’t compete with turntables for feel or function. There was no debate about that.

But nowadays, that’s no longer the case. Today, they’re very close to each other. You can nudge and scratch very well on both. All pro Pioneer DJ gear, for instance, has jogwheels, as well as nearly all DJ controllers, so that’s a pretty ringing endorsement for jogwheels right there.

So why do some DJs swear by platters?

For some DJs, the “feel” of DJing, touching the vinyl and feeling a turntable “pulling” when scratching or manipulating it, is what DJing is about – such DJs prefer to maintain that feel, even if they’re not playing records any more.

So they may choose to retain platters, by using DVS vinyl systems that “convert” normal turntables so they work with DJ software, or motorised controllers. This view is especially prevalent among hip-hop and scratch artists.

It is also largely true to say that when it comes to audiences, people seem to love seeing things “spinning”, and tend to think of DJs playing on record-like platters as “real DJs” – wrongly, of course, but that’s the perception.

What’s the argument for jogwheels, then?

Jogwheels offer very similar control, but are lighter, can be smaller, and are definitely cheaper. In short, the extra expense of a high torque motor and a motorised metal platter is totally unnecessary for digital DJing – as long as your software knows you’ve pressed a play button, it knows the track is to be played, and so any manipulation that needs to be done is equally well done on either static jogwheels or motorised platters.

Also, if you’re not used to them, platters are actually harder to control than jogwheels, because on a jogwheel where the “spinning” is “virtual”, when you hit “play”, the track plays right away.

On platters, though, it has to get up to speed, or you have to manipulate the vinyl to have it start playing cleanly, by holding the vinyl with one hand, starting the platter moving by pressing “start” with the other hand, then releasing the vinyl with a little push at the right moment. This is not easy to do for people not brought up on vinyl.

Most club DJs, for example, are perfectly happy to play on jogwheels, which are the control method that has been fitted to Pioneer DJ’s media players for decades.

So which is best?

There’s obviously no right answer. Both can do the job just fine. But these points should help you decide:

So that’s it – the difference between platters and jogwheels, what type of DJ uses each, and why. We’d love to know your thoughts on this, so do leave them in the comments below.

Learn to scratch with us

Always wanted to learn to scratch? Whether you want to learn on your turntables, on modern DJ controllers, or any kind of hybrid system, our “Scratching For Controller DJs” course has your back.

Teaching scratching slowly, methodically and properly from the very beginning, our unique “separate hands” teaching method has made this artform easy for thousands of DJs – and could do so for you, too.

Click here to learn more about Scratching For Controller DJs

Which Are the Best Motorised DJ Jogwheels? 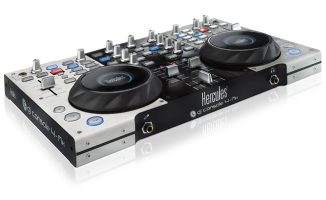 Your Questions: How Do I Mix Four Decks On A Two-Deck Controller?