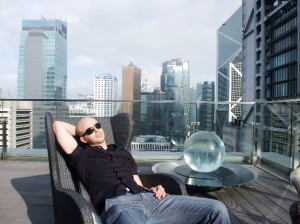 Matt Challands lives in the centre of Paris, France. He grew up in the hedonistic rave times of the UK in the 1990s and lived in Amsterdam and Spain before moving to Paris some years ago, where he started DJing upon arrival.

He originally DJed deep and funky house, creating sets in parties, bars, bar/clubs and clubs. He’s since evolved to a more eclectic style of DJing to shape the local scene and blends electro, pop, rock and more genres during his sets.

He’s been using digital format for around 80% of his sets and loves it, although he still ventures to his favourite vinyl store on occasions.

Matt’s also one half of DJ producer duo, Sao Paulo Punks and runs a DJ blog when he’s not DJing or producing.

Most recent articles by Matt Challands