The Blue Yeticaster is a podcasting microphone package that includes the Blue Yeti mic, a shockmount and a boom arm. The mic excels at recording the human voice, plus it has multiple pickup patterns that make it suitable for a variety of recording situations. We like it a lot – you get everything you need, and all parts are of a high enough quality to make the package great value.

If you want to record a live show, a DJ mix show, a podcast, or record any other kind of content for use on the web, a decent microphone is a must. Recently we’ve been using the Blue Yeticaster here in the Digital DJ Tips studio, and this is our review of the complete set-up – mic, shock mount and boom arm.

It comes in a big, long, tapered cardboard box, with all the parts well packed and wrapped. One unpacked, you get the Blue Yeti mic (it’s quite a famous microphone in its own right), the Radius 3 shock mount (which the mic attaches to), and the Compass arm, which is the “boom” part of the set-up, designed to hold the mic right where you want it – especially useful when sat or stood at a desk.

It’s simple to assemble the parts, with the two joints of the arm having tension adjusters to make the arm loose enough to adjust but stiff enough to stay where you put it. There is a U-clamp for attaching to a table or workbench, and it is plenty deep enough for the deepest of worktops.

The mic and shockmount attach to the arm via a brass-coloured metal threaded attacher, which does need to be quite tight as it can come loose a little too easily otherwise.

This is a digital mic, which means the output is via a USB cable to your computer. A decent long cable is supplied to connect it.

The mic is usually best positioned hanging “upside down” with the boom keeping it in front of your face while itself not getting in your way – see the video. There’s an optional pop filter to stop sibilant sounds from your mouth, but I didn’t feel I needed it out of the box, and haven’t felt the need to get one in the time we’ve been testing it since, either.

If you want to use it for podcasting and don’t want to use your computer’s speakers for audio (a good move) there is a headphones socket and headphones volume control. You could equally though just use the usual headphones output on your laptop or desktop, which is actually how I use it.

On the back of the mic are a gain control and a mic pickup pattern selector. Here are the settings: 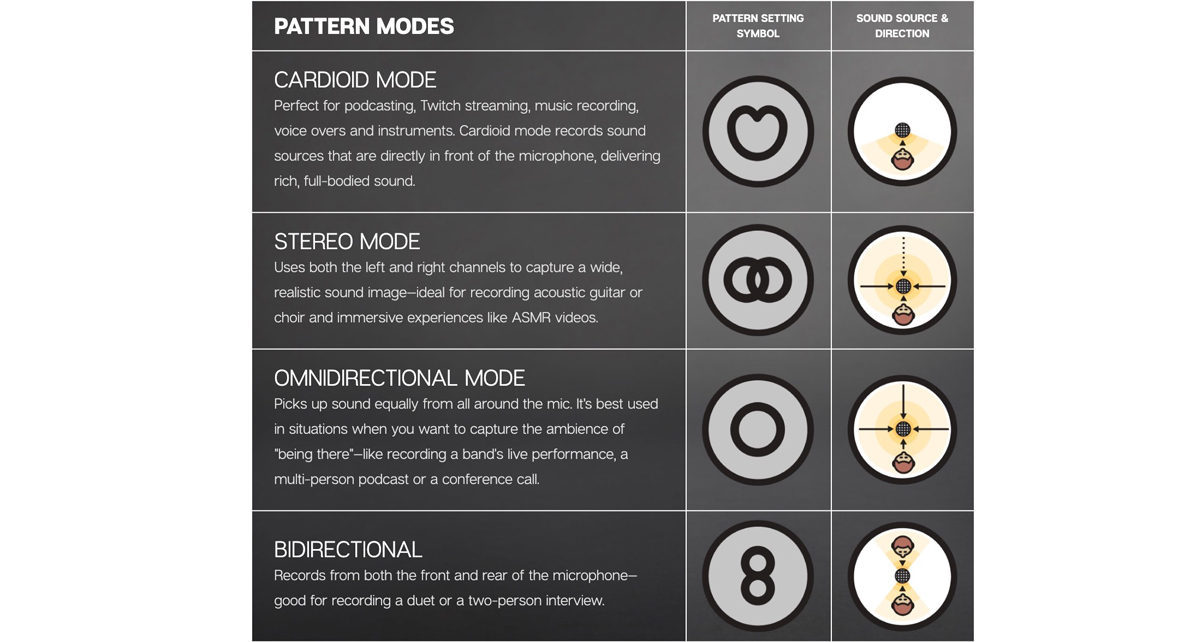 TLDR; if you’re just recording your own voice, you’ll use it in cardioid mode.

It has a full-range condenser mic sound, with quite flat midrange, giving a pleasing intimate tone, at the expense of some presence; certainly a great sound for listening to extended sections of speech – although you’ll want to make sure you duck music low enough when speaking over it with this mic so your voice cuts through.

In the accompanying video you’ll be able to heard this mic against a Rode dynamic lavalier mic; you’ll hear that although it sounds different to the Rode mic, it sounds great; what sound you prefer is really down to personal preference.

The Radius 3 shockmount does a good job of keeping the output clean, and I noticed its effects the most when using the mic attached to the workbench on which I was also DJing – vibrations were stopped before appearing as bass “thumps” in the signal.

Blue Microphones mics are well liked and respected, and the Yeti mic is a bit of a classic already. When combined with the Radius 3 shockmount and the Compass arm, it’s a ready-made system for podcasters, DJ mix show presenters and livestreamers, which performs well and offers great value for money.

Being a condenser mic it has that full, open sound I was speaking of earlier, and having the cardioid setting means that for rooms where you don’t have the luxury of complete silence, it’ll at least minimise any background noise. It’s good to have the other patterns available too, making it a flexible mix for further recording situations too.

Overall, we like it a lot – you get everything you need, and all parts are of a high enough quality to make the package great value.