djay Pro 2 isn’t a massive leap from its predecessor but it adds enough new features to keep the app ahead of the innovation curve, especially when compared to Serato DJ and Traktor Pro 2. Automix AI can be useful for mobile DJs who need a “set and forget” option (eg cocktails, background music during event registrations), though improved Spotify integration is the key focus here: Match is good for scouring both your hard drive and Spotify for tune recommendations, and the unified iTunes / Spotify playlists make for a browser that brings us closer to the “DJ streaming library” scenario. Highly recommended if you’re a djay Pro user, and if you aren’t, it’s worth giving the app a try.

djay Pro 2 is a Mac-only app (djay Pro was just released in Windows earlier this year), and it can be downloaded from the App Store or on the Algoriddim website. A 15-day free trial is also available if you just want to try it out. Once downloaded, it’s just a matter of installing it on your computer.

The djay Pro 2 interface will be familiar if you’ve been spinning with laptop DJ software in the past: the top half of the screen shows your virtual decks and a mixer, and the bottom has your music library. This is the basic view, and you can change it according to your needs, as we’ll see later on.

I was impressed at how quick and painless getting it set up in my laptop was. The only other thing that was left for me to do was to log into was my Spotify Premium account, which was also quick. At first blush, Spotify in djay Pro 2’s browser seemed fine – my playlists and listening history loaded properly, and dragging one of the tracks into djay Pro 2’s decks was painless and rather quick.

The thought of dropping tunes from my playlists thrilled me, but I’ve got work to do, so I started exploring. 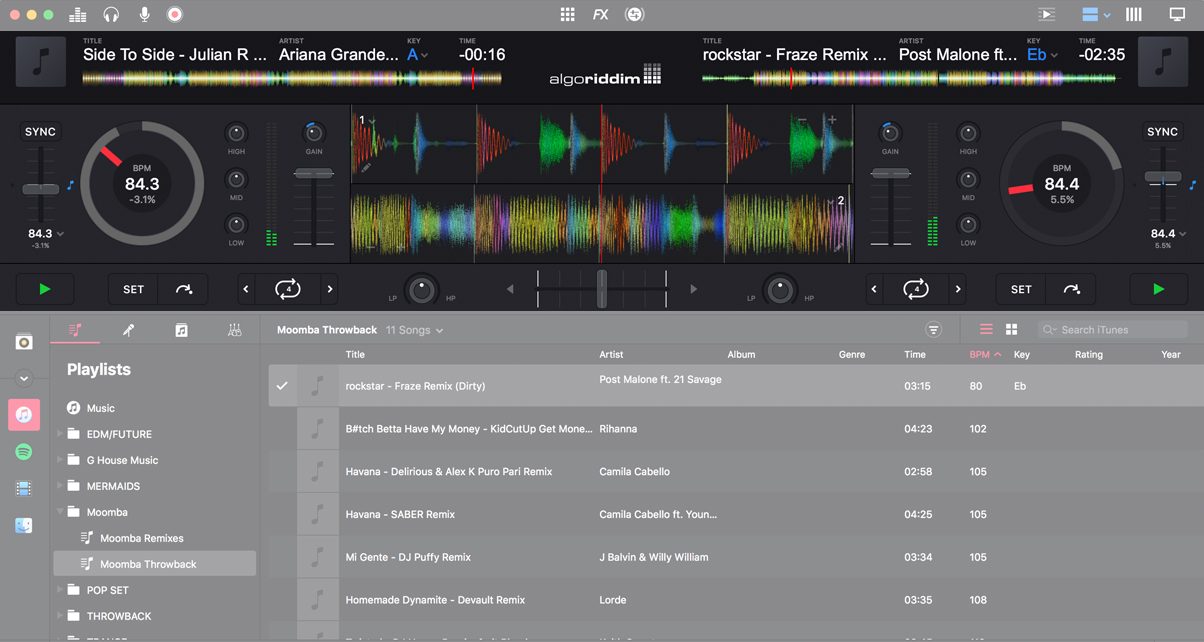 As mentioned, the decks in djay Pro 2 are customisable: You can have either two or four decks, and you can opt to see waveforms (horizontal or vertical) or turntable graphics.

When using only two decks, they can be displayed in either Vinyl or Decks mode: Vinyl shows your decks as turntables, while Decks shows them as waveforms. You can choose to see them as waveforms stacked or running alongside each other.

Each deck has a track name, artist name, time left, musical key, and waveform display at the top. You get a pitch fader, key lock as well as basic transport and looping controls.

For many casual DJs, this will be more than enough to play a DJ set. For more serious jocks, though, you’ll want more control, and djay Pro 2 has that: clicking on the Tools button at the top of the screen will show two mini-windows under each deck, which can display either the FX touch pad, loop controls, or hot cues. 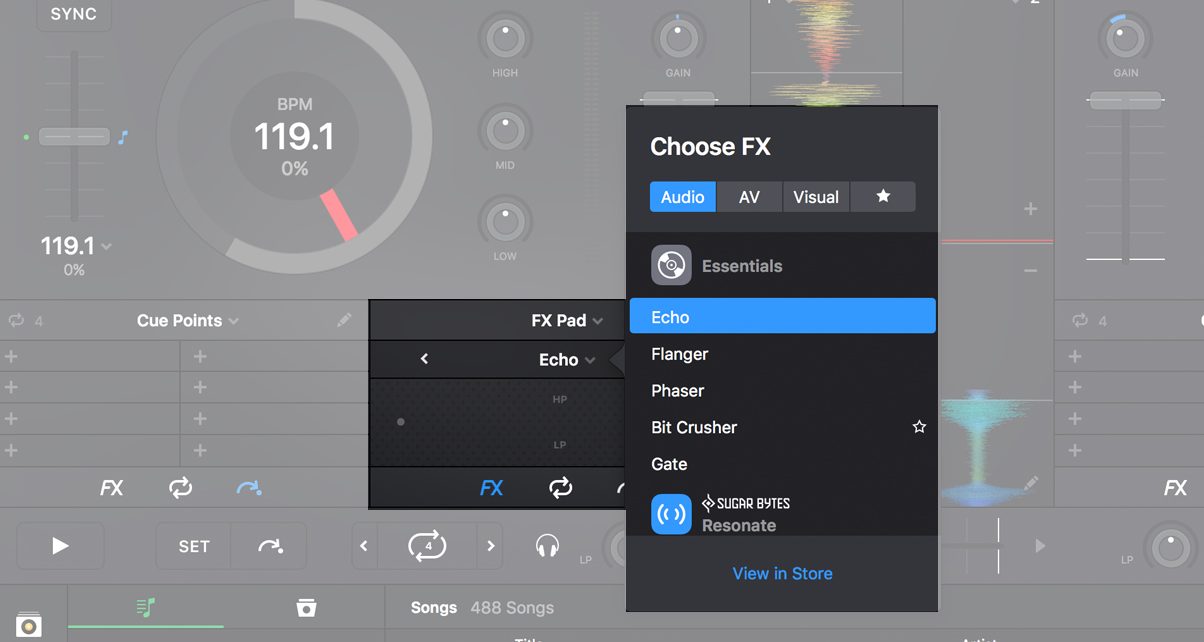 djay Pro 2 ships with five audio effects: Echo, Flanger, Phaser, Bit Crusher and Gate. You can purchase more in the Algoriddim store which were developed in conjunction with plugin developer Sugar Bytes.

There are two ways to trigger these effects: via the FX touch pad, which you can find below each deck when the Tools button is enabled, and through the FX section, which is enabled via the FX button. Here, you can chain up to three effects and turn them on or off individually.

Aside from the audio effects, there are also Audio Video and Visual effects which can be used when you’re spinning with video or VJing. 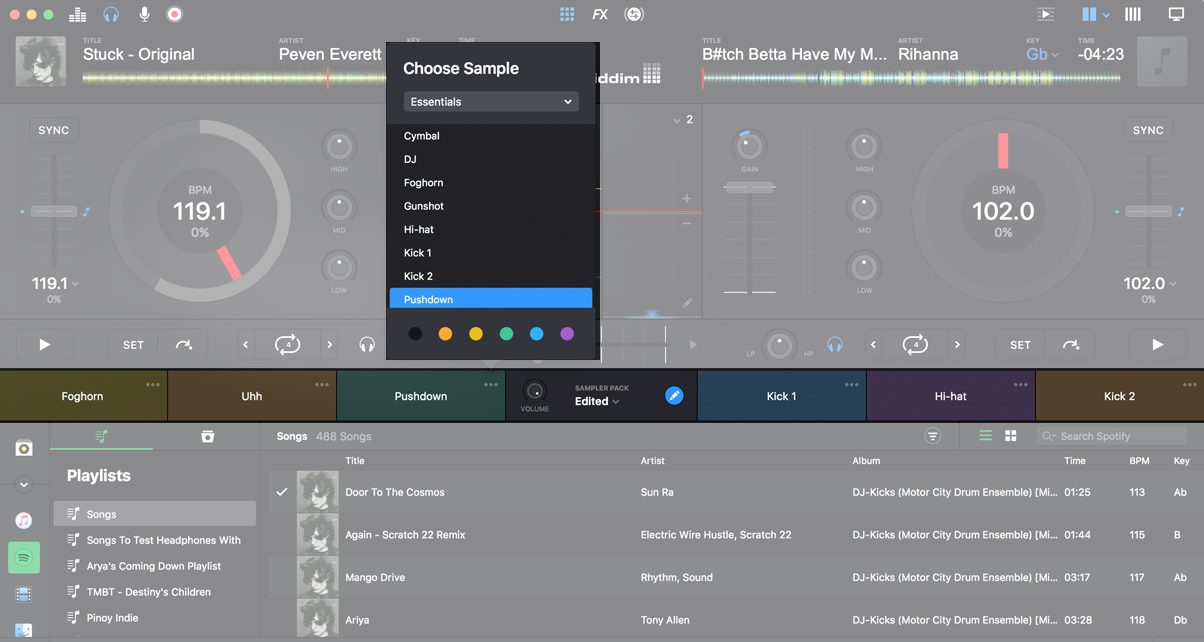 djay Pro 2 also comes with a built-in Sampler, accessible by pressing the Sampler button at the top of the screen. You can have either six or 12 sample slots, and it comes with six sample packs to choose from, including two artist-created packs by DJ Qbert and Milk & Honey. You can colour code and rearrange the sample slots and create your own presets, but at the moment there is no way to record or import your own samples. 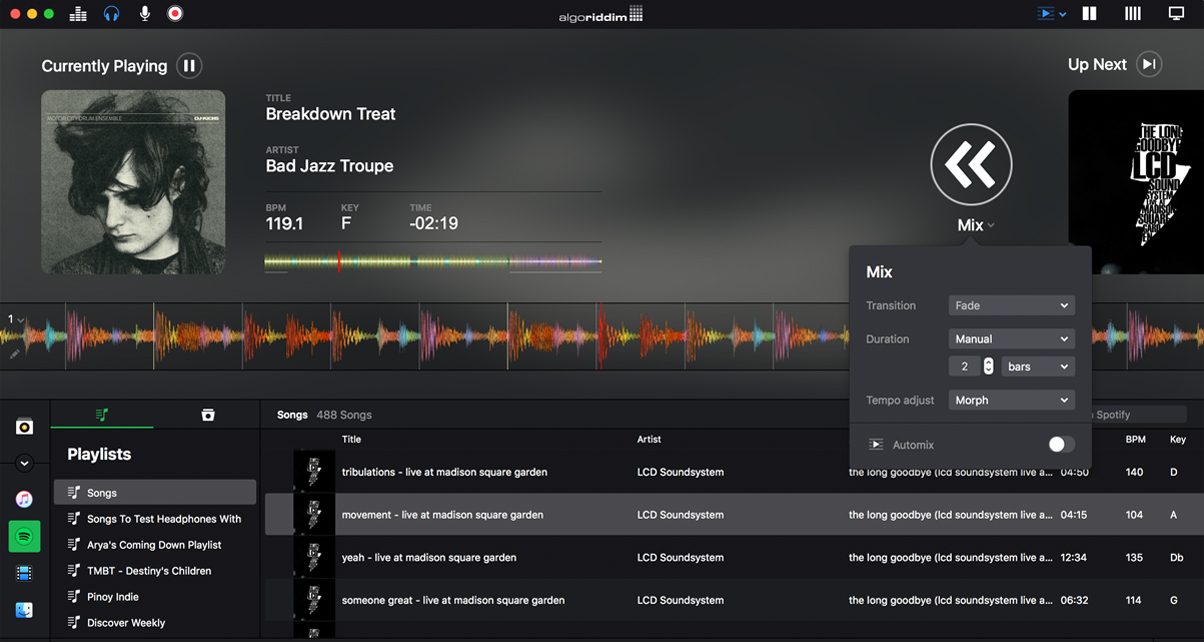 djay Pro 2’s new features is its improved automixing, which now relies on “machine learning” and mixing data gathered from actual DJs – it’s unclear whether djay Pro 2 actually culls all of this mixing information from the cloud in real time, or if Algoriddim did all the analysis during the development phase.

The way it works is you go into Automix mode and load a track to play. Once you’ve got that going, you can load another track and djay Pro 2 will analyse it. When the track you’ve got playing is almost done, djay Pro 2 will automatically mix in the next track that you’ve added or that you’ve got in a playlist. You can also hit the “Mix” button if you want djay Pro 2 to mix it immediately instead of waiting for it to end.

You can specify how you’d want the Automix to happen. There are eight different transitions to choose from: Automatic, Fade, EQ, Filter, Echo, Brake and Reverse. You can set the duration of the mix to Automatic or Manual (for if you want to do longer blends), and Tempo Adjust lets you specify whether you’d want the BPM to sync or to “Morph”, which lets a track mix in at a different tempo before returning to its default.

Is this useful? It depends: if you’re already a digital DJ and you plan on using djay Pro 2 for gigs, you probably won’t use it apart from playing a track or two while you make your way to the toilet and back. However, if you’re a wedding or mobile DJ who provides music not just for the after party (ie when you’re actually mixing), but for other aspects of the event too such as cocktails, guest registration, dinner, and so on, then AI Automix can make your job easier by doing the music for those aspects for you in a sonically pleasing way – just create a playlist of music and let djay Pro 2 do the rest.

djay Pro 2 lets you comb through Spotify’s entire 30 million-plus song catalogue to look for a track, and the coolest thing is that all the songs come labelled with both musical key and tempo. This is useful for key mixing and, if you’re a DJ/producer, for remixing tunes and creating mashups – you can search tunes based on tempo and key to see which ones would make a good match.

Speaking of matches, djay Pro 2 comes with a Match feature that gives you suggestions for what to play next based on the tempo, key, and “danceability” of what you’ve currently got playing. 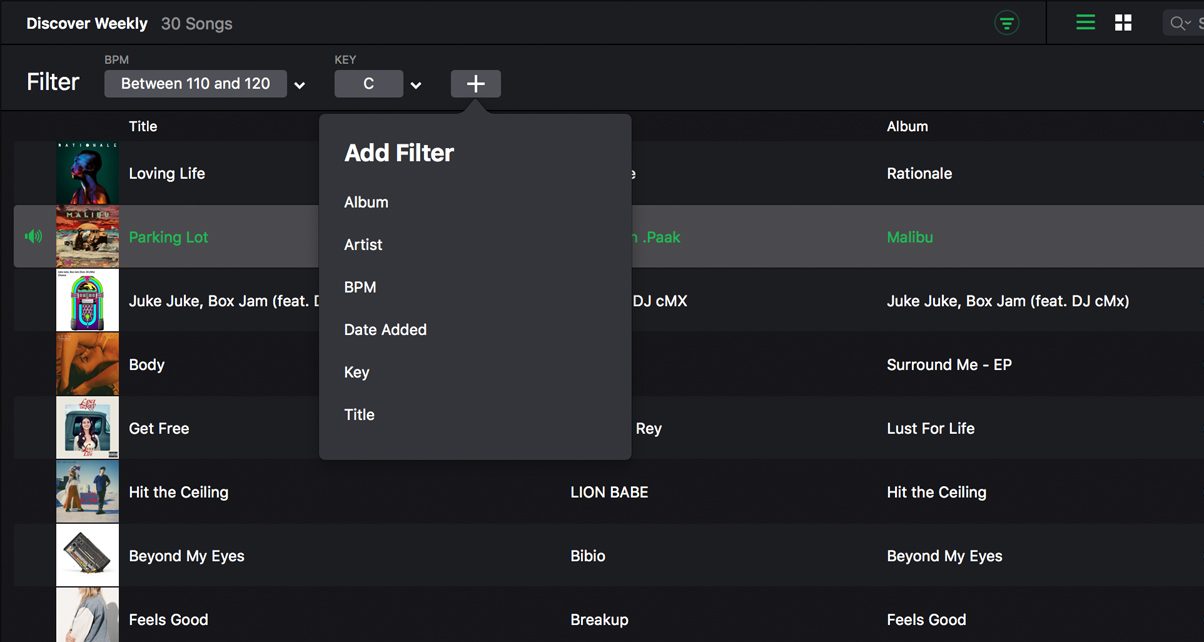 Since you’ve got almost all of the world’s recorded music at your fingertips, you’re going to need a way to cut through large swaths of tunes. djay Pro 2’s library filter lets you specify a range of categories with which you can sift results through, including tempo, musical key, artist, and album. It may not sound like a killer feature, but it’s quite handy when you’re working with hundreds of songs in a Spotify playlist, or even just combing through your own iTunes library.

The most impressive feature of djay Pro 2 is the ability to create playlists that consist of music coming from both your hard drive and Spotify. Provided you’ve got an active internet connection, you can pick tunes and create massive playlists spanning genres and decades. In theory this is fantastic, and it does work well in practice, at least until you lose your internet connection which is when you’re forced to switch to just your hard drive’s music (there’s no “offline” saving in djay Pro 2).

There’s another caveat: you aren’t legally allowed to perform in public with music that’s streamed from Spotify’s library. Virtual DJ 8’s streaming service and the now-defunct Pulselocker allowed for this, but that has yet to arrive on djay Pro 2 and Spotify. 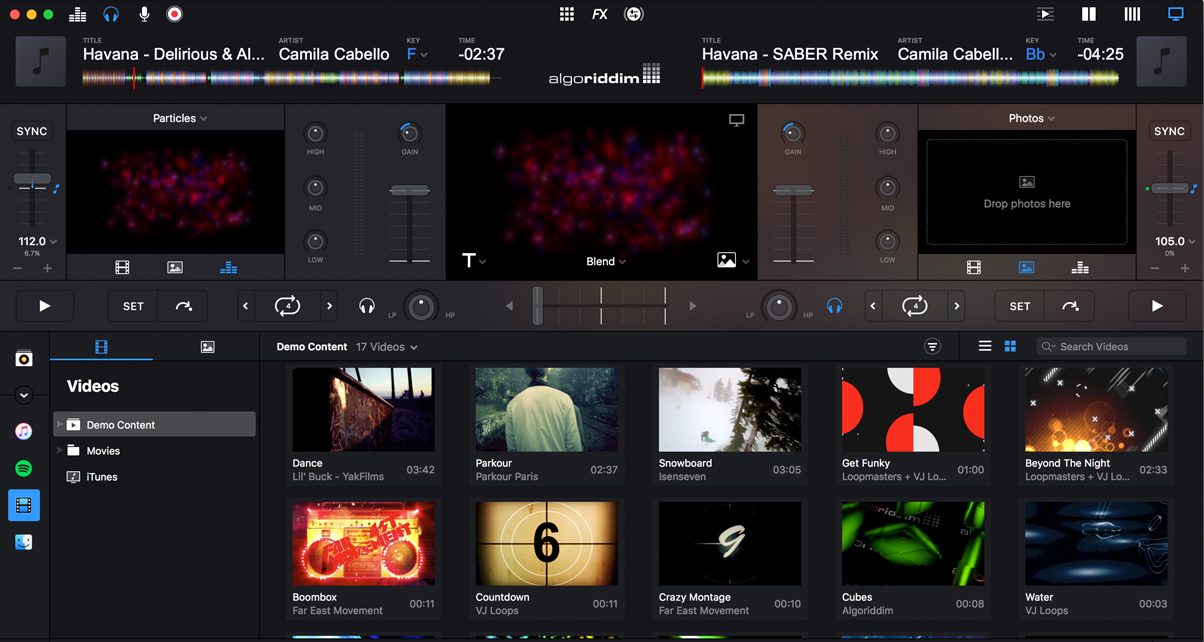 djay Pro 2 also lets you spin with video files, whether you use music videos, video clips, or even visuals. There’s a tab in its browser that lets you manage these types of media, which can be handy for DJs who also happen to VJ and have large video collections. All you need to do is to enable Video mode by clicking on the button in the upper right of the screen, drop the video file into a deck, and you’re all set.

You can also use visualisers, which are looping graphics that react in time to what you’ve got playing. There are five visualisers that come stock: Cube, Halo, Levels, Particles and Triangles. 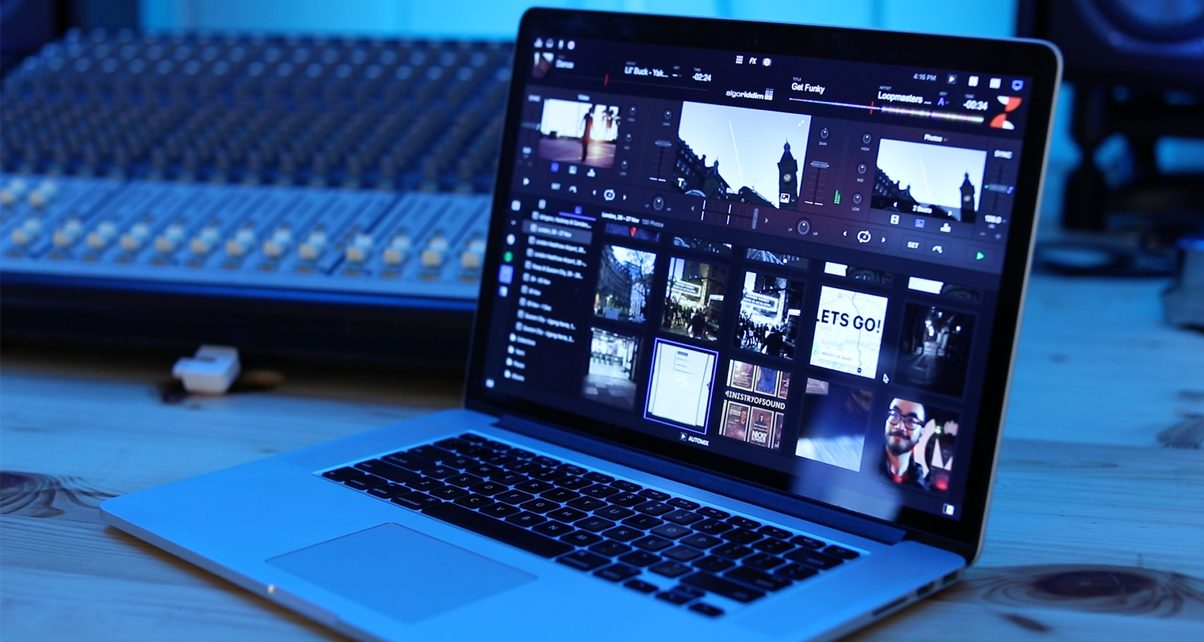 djay Pro 2 comes with the new PhotoMix feature, which is like a tempo-synced slideshow. You drag any number of photos over onto a deck, specify the duration of each photo, and djay Pro 2 cycles through those images automatically while you mix. Great for when you’re DJing weddings because you can show photos taken during the ceremony and the reception proper.

djay Pro 2 has a growing list of over 50 DJ controllers that can be used with the software, including the Reloop Mixon 4, Reloop Beatpad 2, Pioneer DJ DDJ-WeGO4, Numark Mixtrack Pro 3, and more. It also works plug and play with Pioneer DJ’s CDJ-2000NXS2 / DJM900NXS2 system, so you can take your laptop the club and spin with djay Pro 2 using the club’s CDJ / DJM set-up.

djay Pro 2 is a solid piece of DJ software for those who spin with different types of media (eg music, video, visuals) and who prefer to use a streaming service instead of spinning with tunes from their hard drives. Again, there is a legality that prevents you from spinning with Spotify in public, so if you plan on using djay Pro 2 for events and mobile DJ gigs you’re going to have to wait for that to be settled first.

There’s enough on here though for mobile pros to enjoy: AI Automix is one of the best-sounding and easiest automated mixing out there today, and can be used for music playback in scenarios where you’d normally have an iTunes playlist playing – you can even have it on at a bar or pub before you get behind the decks if you like.

Overall, a great update to an already impressive piece of DJ software, and worthy of any digital DJ’s attention.