The Pioneer DDJ-1000 controller for Rekordbox DJ is a four-channel device that has two full-size jogwheels with high-resolution displays built into their centres. The displays are beautiful and the jogwheels are responsive and mechanical, similar to what you’d find on a CDJ-2000NXS2. The included Sound Color FX and Beat FX bring DJM-style effects tweaking to this unit, further bridging the gap between a DDJ controller and a club standard CDJ/DJM set-up. It’s an important controller for Pioneer DJ and is one of its best in recent years. It’s fantastic for intermediate and advanced gigging DJs who want the closest approximation to a club set-up in a laptop DJ controller. Highly recommended.

The DDJ-1000 has four channels with trim pots, three-band EQs, Color FX knobs, and an assignable Magvel crossfader. It’s got two decks, and each deck has a jogwheel with a built-in display, performance pads, a pitch control, transport controls, deck select buttons for switching to decks 3 and 4, and loop buttons that are similar to what you’d find on a CDJ. There are no FX section controls here like what you’d find on a DDJ-RX, DDJ-RZ, and so on, and the reason for that is because it’s already got a Beat FX section in the mixer.

The rear of the unit has XLR and RCA Master outputs, 1/4” Booth outputs, RCA phono / line input jacks and two combo Microphone inputs. It’s also got a power jack, power button and twin USB sockets for connecting up to two laptops for DJ switchovers. The front of the unit has 1/4” and 1/8” headphone outputs.

I plugged the DDJ-1000’s wall wart power supply, hooked it up to my laptop, fired up Rekordbox DJ, switched the unit on and got started. 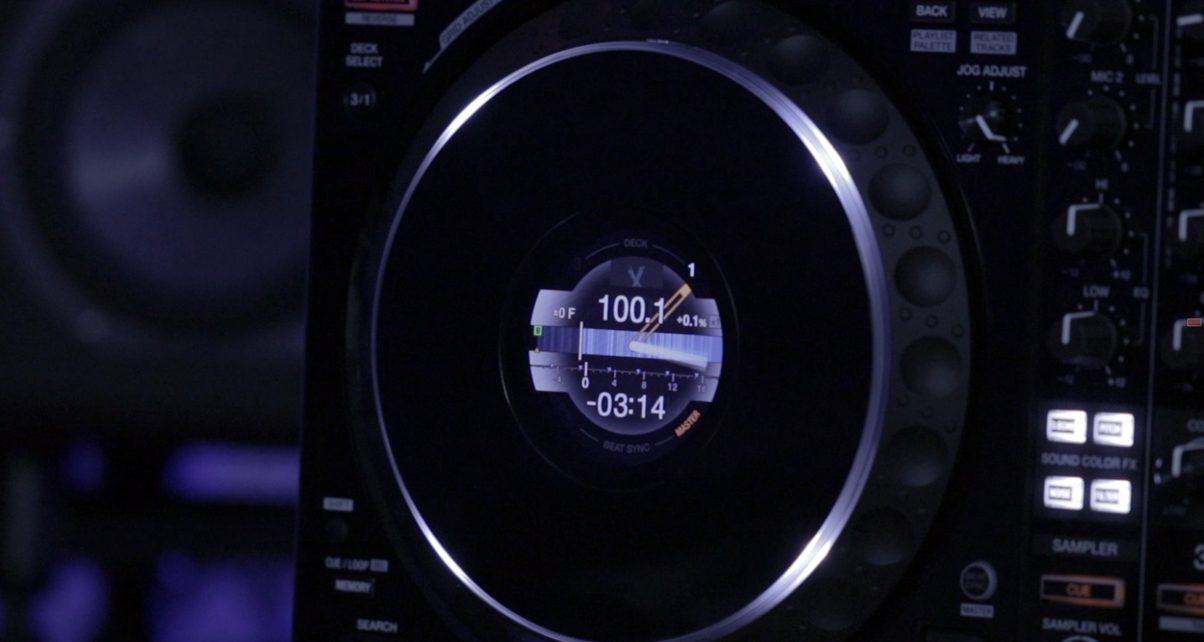 The jogs on the DDJ-1000 have got to be some of the best that Pioneer DJ has put out. It feels more solid than what you’d find on the XDJ-1000, and feels similar to a CDJ-2000NXS2, thanks to its mechanical nature and the addition of Jog Adjust controls. I was never a fan of the mechanical jogs because I preferred the feel of touch-sensitive jogwheels (peep the DDJ-RZ and DDJ-RZX) but I’m starting to have a change of heart because of these jogs. They’re responsive and don’t feel flimsy, while still retaining the overall feel of using a flagship CDJ-2000NXS2 media player. This is surprising, considering that this controller comes in at under US$1200 – that’s “affordable” by Pioneer DJ standards (the DDJ-RZ with full-size jogs and no onboard screens costs double). 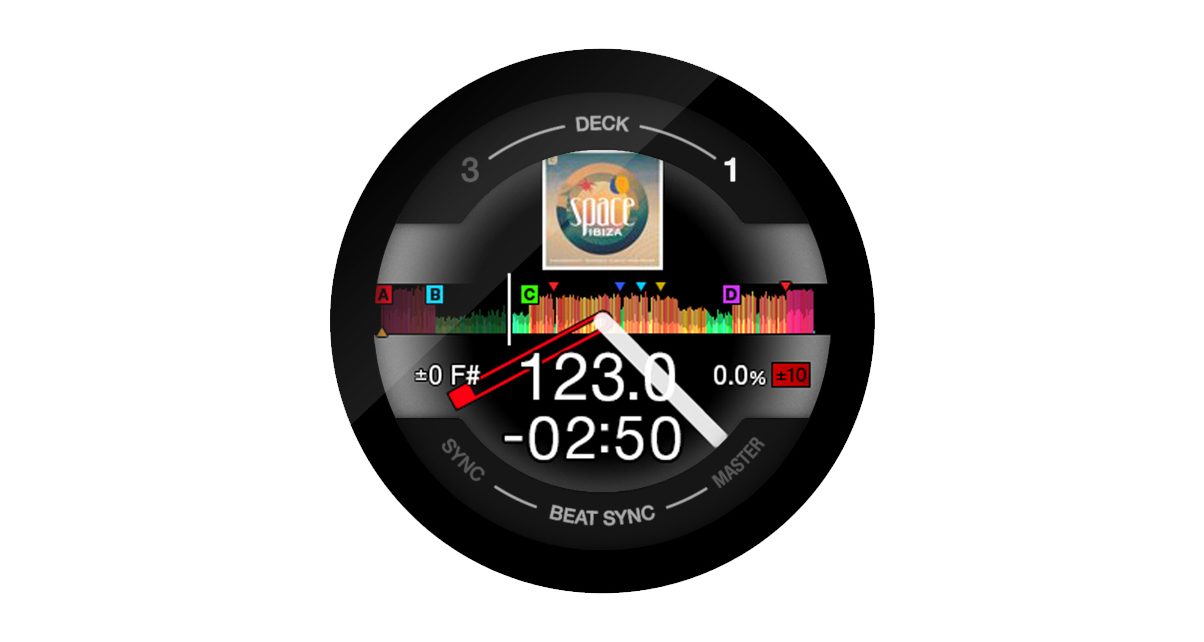 The next thing we’ve got to talk about are the displays: they are gorgeous. Not iPhone X or Samsung S9 gorgeous, but they look fantastic – certainly a generation apart from screens found on Pioneer DJ’s media players. They’re high resolution and they also have a high frame rate, two things which Pioneer DJ was lagged behind in compared to its current rival Denon DJ. The DDJ-1000 puts Pioneer DJ squarely in 2018 territory as far as displays go, and it doesn’t take much of a stretch to imagine this kind of display to appear on an upcoming version of its CDJ / XDJ media player (CDJ-3000NXS, anyone?).

The display shows the album art, waveform, and time. It also shows a phase meter that has an indicator for every four bars, which is cool because when it comes to dance music, important developments in a tune happen after counting four bars. Pioneer DJ just made it easier for you to tell where you are in a four bar phrase thanks to this phrase meter.

You also get two ways of viewing your position in the track: first is via a playhead that goes from left to right in the track, and second is via a bar that goes around the display, kind of like a clock’s hand.

Some elements of the display are customisable: you can change the colour of the waveform, you can choose to hide album art, and you can select whether you want to see the track’s remaining time or elapsed time. 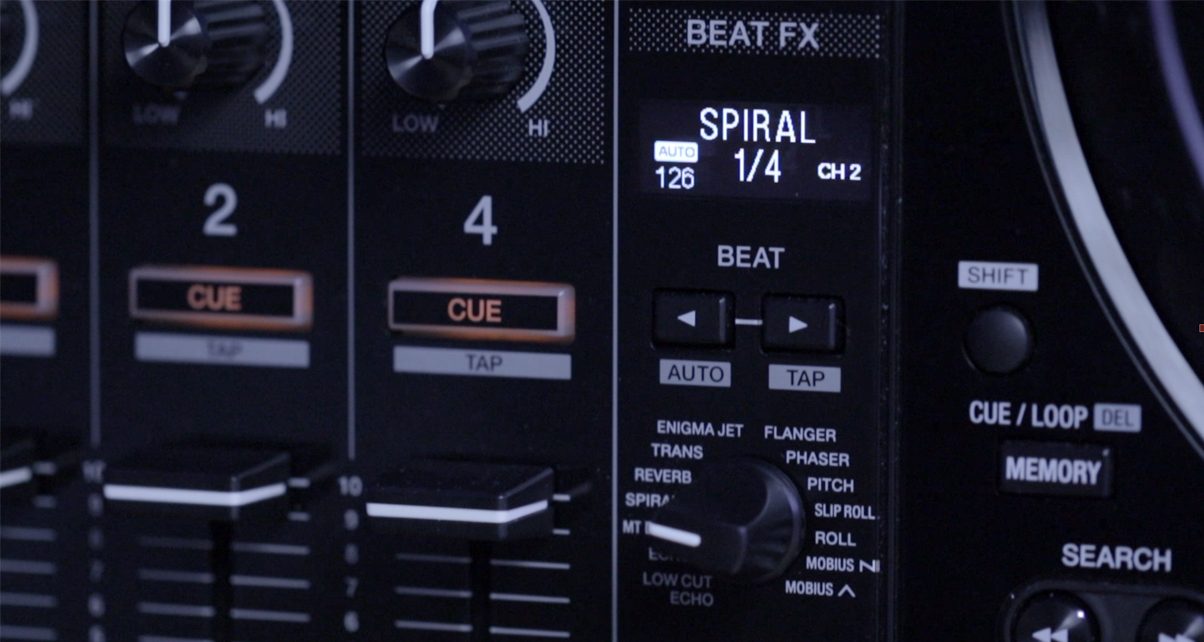 The DDJ-1000 is the first DJ controller from Pioneer DJ to have two hardware effects sections onboard, and these are effects that are pulled straight from the DJM-900NXS2, along with a few that are exclusive to the unit (more on them later). This means that these effects are built into the controller itself as opposed to just being controls for Rekordbox DJ’s effects, and that lets you add effects to any audio that passes through the DDJ-1000’s mixer section.

There are four Sound Color FX: Dub Echo, Pitch, Noise and Filter. These are controlled by the Color FX knob on each channel. There are also 14 Beat FX which are selected via the rotary switch in the Beat FX section: Low Cut Echo, Echo, Delay, Spiral, Reverb, Transformer, Engima Jet, Flanger, Phaser, Pitch, Slip Roll, Roll, and two Mobius Effects. The Mobius Effects let you create interesting looping effects that loop into each other, and are a hardware exclusive on the DDJ-1000 (it’s included in the latest Rekordbox DJ software update, too). You can see which effect you’ve got selected through the Beat FX OLED display.

The effects sound good, but more importantly the way they work is exactly the way you’d use effects when you’re spinning at the club with a DJM mixer. That means you can practice using those effects at home on your controller, which can be confusing for new club and bar DJs who haven’t spent much time mixing with a CDJ/DJM set-up. This gives you more confidence to “step up” to the effects tweaking plate when you’re at the club. 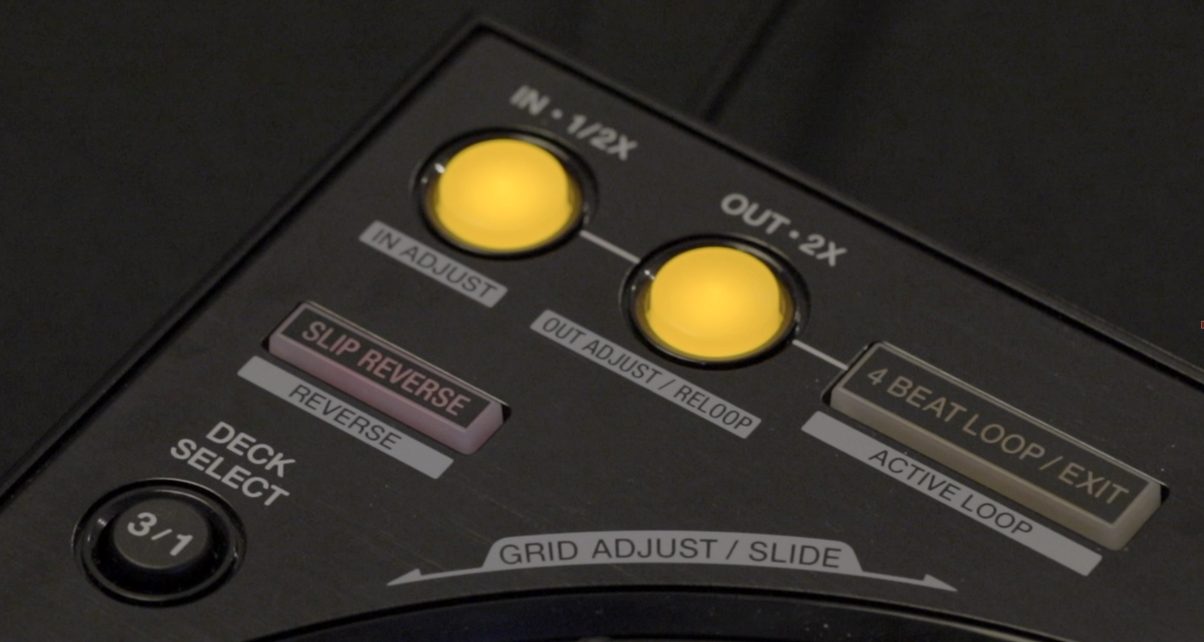 The DDJ-1000 has a looping section that’s similar to what you’d find on a CDJ or XDJ media player: there are Loop In and Loop Out buttons for creating your loop manually, and you can create four beat Auto Loops using a single button. Again, this works to familiarise yourself with the way looping works on CDJs / XDJs, which new club DJs may find confusing since the loop control layout for its previous DDJ controllers relied on using performance pads.

The pads themselves are smaller than what you’d find on the DDJ-RZ, DDJ-RZX, DDJ-SZ2 and are closer to the size of the DDJ-RX. They’re springy and responsive, and are built to be used and abused, which is great because having the Keyboard pad mode means that you can play melodic cue juggles on them, kind of like what you’d be able to do on the DDJ-XP1 pad controller. 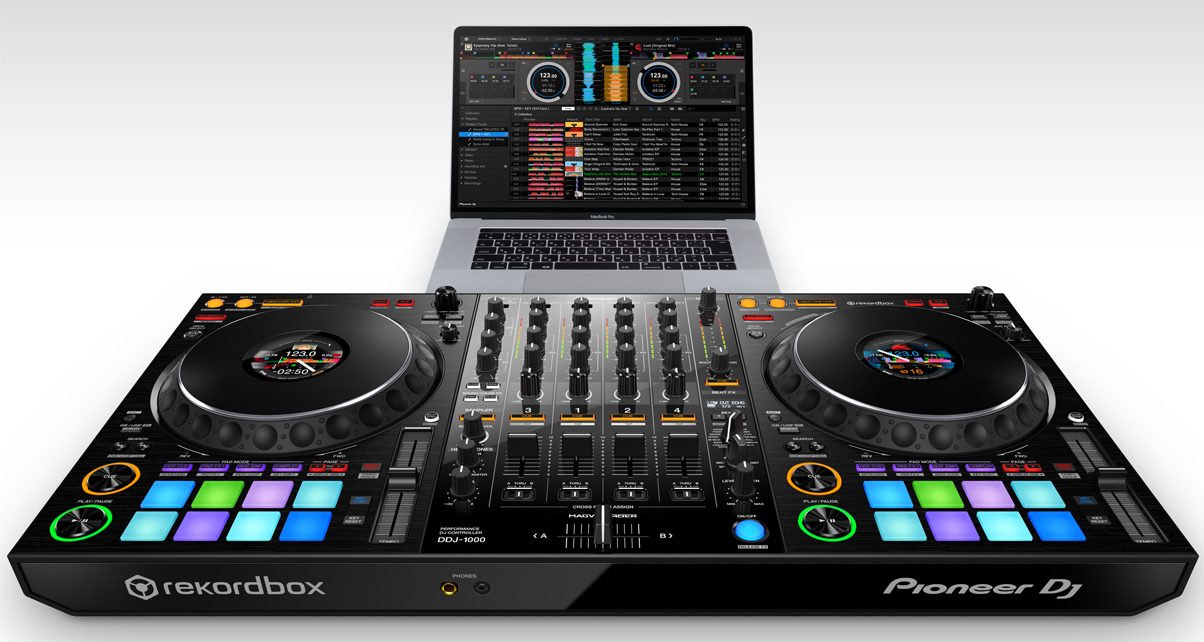 The DDJ-1000 is an important controller for Pioneer DJ because it represents a leap in the way it produces gear. It releases gear regularly and often, though a huge portion of those releases are simply iterations of its previous controllers: More pads, a new silkscreen, a few new buttons here and there but nothing that makes a massive difference in the way that the controller works. Not so with the DDJ-1000. What you’re getting is easily the most powerful and advanced DJ controller that Pioneer DJ has made for Rekordbox DJ, and one that could very much be at the very peak of its current technological powers. It’s hard to think of what other innovation Pioneer DJ could add to this device moving forward without introducing a paradigm shift in what DJing is or what DJ controllers should have onboard.

While it may seem like a souped-up DDJ-RX at first glance, there’s a lot going on this unit that gives us a glimpse into Pioneer DJ’s thinking as regards the future of its DDJ controller line: The most obvious difference here are the onboard jogwheel displays that finally do away with the tired, old segmented LCD screens (who still looks at them these days?) and in their place are new, high-resolution full-colour screens. The jogwheels are also mechanical as opposed to touch-sensitive, meaning they are similar to what you’d find on a club standard CDJ or XDJ media player. Will we see more DJ controllers with built-in displays, mechanical jogs, or both? Only time will tell.

Apart from the displays and jogs, you also get two sets of hardware effects: Sound Color FX (controlled by the Color FX knob on each channel) and Beat FX. These are the effects that you would normally find on a DJM club mixer (eg DJM-900NXS2, DJM-750MK2, DJM-450 and so on). So yes, you’re basically getting something that’s very, very close to a CDJ/DJM layout and set-up in controller form, with the exception being that you still have to connect it to your laptop running Rekordbox DJ.

If you’re a DJ looking for a serious controller for practice and gig use, the DDJ-1000 ticks that box. If you’re a club DJ who spins with a laptop and you’re looking for something that bridges the gap between a club and a home set-up, the DDJ-1000 ticks that box too. If you’re a mobile or pro DJ, the onboard mic inputs and variety of Master and Booth outputs also mean that it’s got your connectivity options covered. In fact, the only DJ segments that the DDJ-1000 doesn’t service are absolute beginner DJs who are still getting to grips with spinning, and DJs who spin exclusively without a laptop (ie thumb drives or vinyl).

This is far and away the best controller Pioneer DJ has put out in recent years, and we can’t think of a better device for professional, gigging laptop DJs. Highly recommended.

Which to go for, this or the DDJ-1000SRT for Serato? Read our detailed comparison here.