The DJM-750MK2 is a four-channel standalone mixer that’s Rekordbox DJ and Rekordbox DVS-compatible. It’s a solid option for club and professional DJs looking for a mixer for their home DJ set-up. It retains most of the features of the flagship DJM-900NXS2, including a host of Beat FX and four Sound Color FX, and the Send / Return feature that lets you use external hardware effects processors or your iOS device. It’s pricey, but this is the closest you’ll get to a DJM-900NXS2 which costs double. Highly recommended.

The DJM-750MK2 is a heavy piece of kit – it feels solid the second you lift it out of the box. It also looks the part: the chassis is made of metal all around, giving that impression that it’s built to withstand the rigours of the road and heavy-handed DJ use. The build quality is impressive.

It’s a four-channel standalone mixer – that means you can hook up line level devices like DJ media players, drum machines, and synths to each of the four channels, along with turntables. You can also plug it into your laptop running Rekordbox DJ for control of up to four mixer channels in it.

It has a mic input with its own EQs, and it has a Send / Return channel on the right side of the unit where you can assign the Send / Return channel. You can also plug in an iOS device via USB for added effects processing (more on that later). The headphone section has a volume and cue mix knob, along with two headphone jacks: 1/4″ and 1/8″.

The rear has a plethora of connectivity: there are four pairs of phono / line inputs, 1/4″ jacks for the Send / Return channel, XLR and RCA master outputs, 1/4″ booth outputs, a USB jack for connecting your laptop, a combo mic input, a power button and a three-prong (IEC) power receptacle. That’s enough connectivity for both club booths and mobile DJ set-ups, and certainly more than enough for home DJ use. 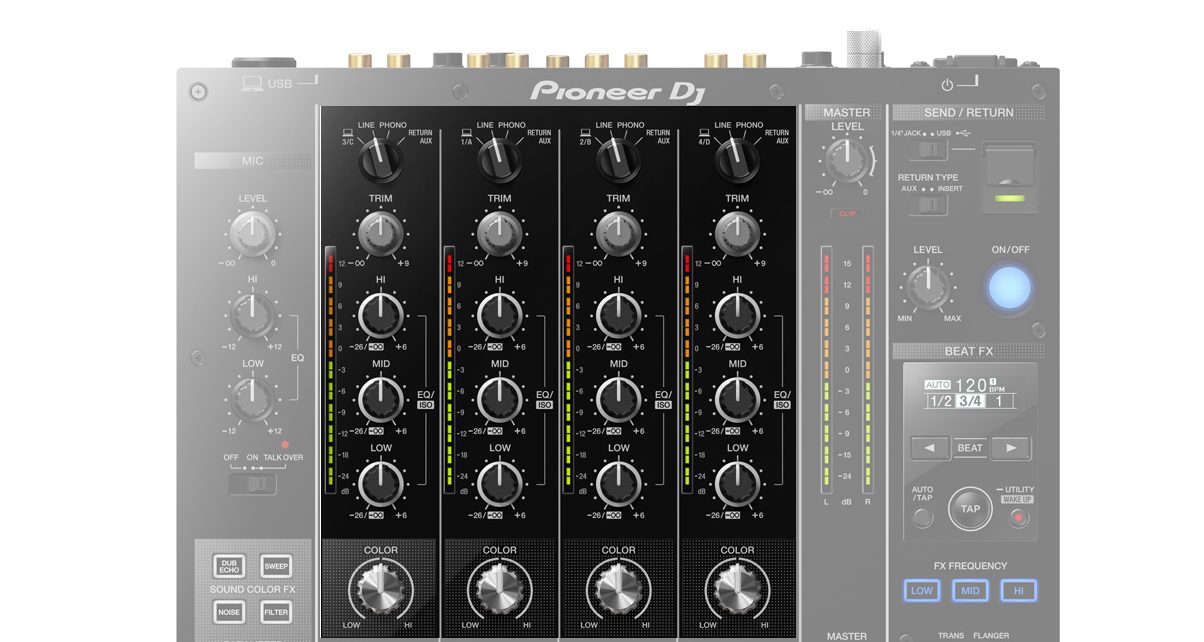 The DJM-750MK2 has four channels onboard: each channel has an input select knob, trim pot, three-band EQ, a Sound Color FX knob, and a volume fader. The EQs are switchable from standard to isolator settings, and the volume faders have fader curve adjustment switches. The crossfader is a Magvel fader, and comes with curve adjustment switches as well.

The EQs are clean and the Sound Color FX knobs are chunky and responsive, just as you’d expect on a high-end Pioneer DJ mixer. The crossfader is a Magvel fader, which is Pioneer DJ’s top-shelf fader model, and it’s buttery smooth and great for cutting and fading tracks in and out. Though the volume faders are just standard faders (unlike the DJM-900NXS2, which has Magvel faders for both the volume and crossfader), they are decent and up to task.

The input select knob lets you switch from among four different choices: line (CDJs / XDJs), phono (turntables), digital (for use with Rekordbox DJ), and Return Aux. Return Aux lets you route the audio coming from the Send / Return channel into any of the four channels on the mixer. This is useful if you want extensive control over the aux signal – that means that you can use the EQs, Sound Color FX, and Beat FX on it

The DJM-750MK2 has a combo TRS input for plugging in a mic. It has its own high and low EQ knobs, plus an on/off and talkback switch.

The DJM-750MK2 has an independent Send / Return channel, just like the DJM-900NXS2. This lets you “send” out audio to either a hardware effects unit via the 1/4″ Send jacks in the rear of the mixer, or to an iOS device connected to the USB jack in the Send / Return channel. You can then choose to route this effected audio back into the mixer two ways: “Insert” completely replaces the “dry” sound (audio coming from your mixer) with a “wet” one (audio coming from the effects Return channel). “Aux” lets you route it to another channel via the Return Aux input selector switch, letting you blend the dry signal with the wet one. 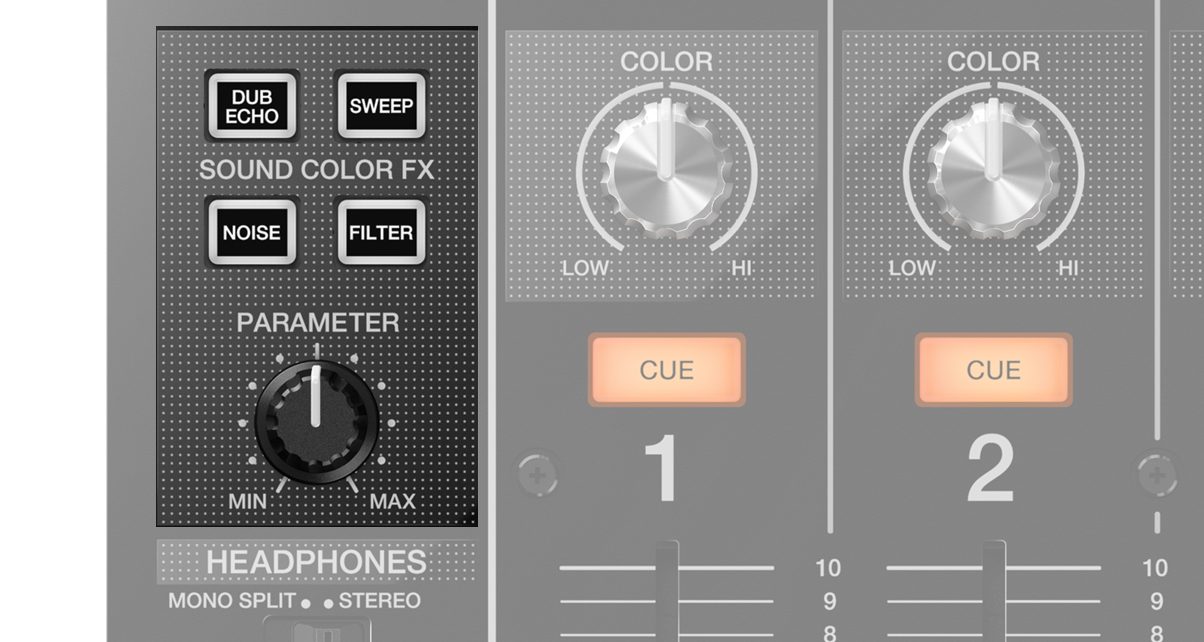 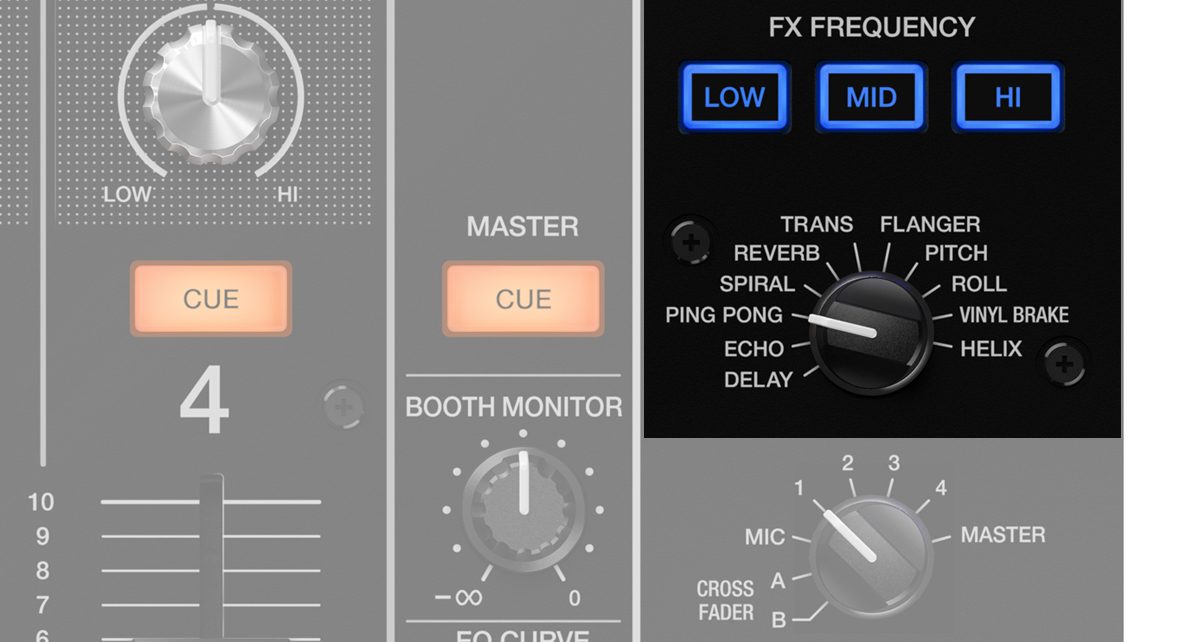 The 11 Beat FX found here are: Delay, Echo, Ping Pong, Spiral, Reverb, Transform, Flanger, Pitch, Roll, Vinyl Brake, and Helix. You can adjust their parameters via the “Beat” buttons underneath the Beat FX display, along with the “Time” knob found in this section. There are also FX Frequency selector buttons here – these let you specify whether you’d like the Beat FX to affect the highs, mids, or lows.

Again, these all come from the DJM-900NXS2, though there are three FX that didn’t make the jump: Slip Roll, Filter, and Phaser. You’re also missing out on the X-Pad touch strip that’s found on the DJM-900NXS2, but these are hardly deal breakers. 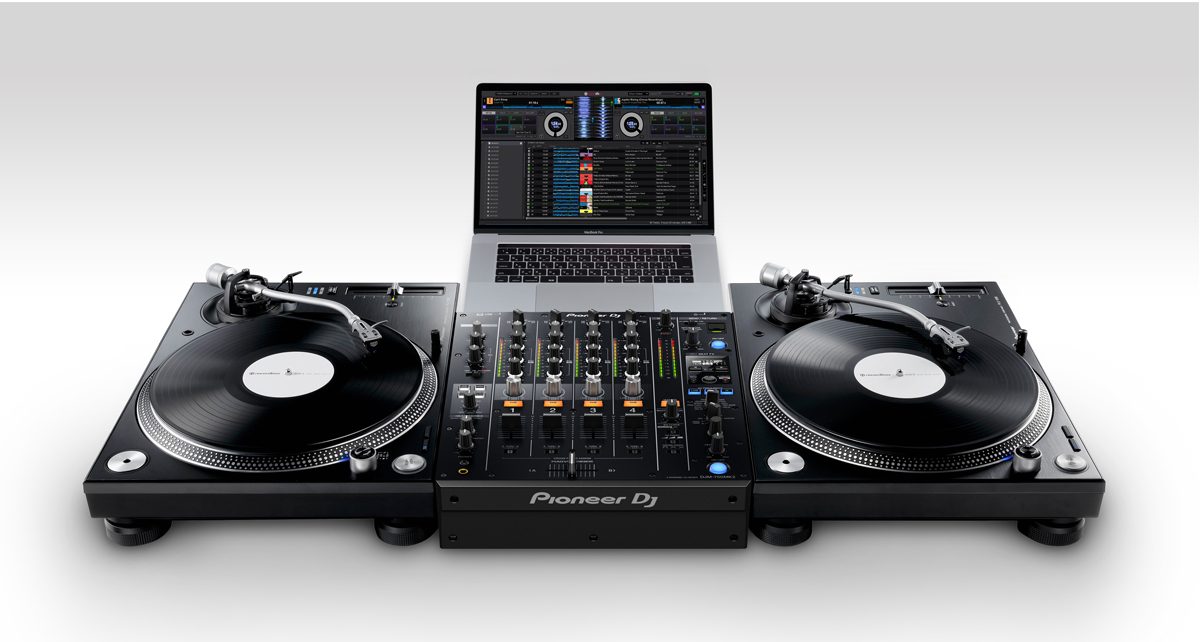 The DJM-750MK2 ships with Rekordbox DJ, and that means you can spin with music files on your laptop should you wish to do so, though you’ll still need a controller or media player to control the virtual decks in Rekordbox DJ. It also comes with a licence for Rekordbox DVS, letting you spin with timecode media (eg vinyl, CDs, music files).

This thing is a beast of a mixer – it’s hard to imagine a club or gigging DJ wanting more (that is, until you get your hands on a DJM-900NXS2). Naturally, the DJM-750MK2 will draw comparisons with the DJM-900NXS2 because it is the latter mixer’s “little brother” in many ways: all of the DJM-750MK2’s features are inherited from the DJM-900NXS2, and the layout between the two is similar (though the DJM-750MK2 has a smaller footprint).

Another thing that’s smaller is the price tag – the DJM-750MK2 retails for just under US$1200, making it less than half the price of the flagship DJM-900NXS2. It’s still expensive – you can get a full-featured DDJ-RX controller for the same price, or you can plump down an extra US$500 and get the all-in XDJ-RX2 – but it isn’t as unreachable as a DJM-900NXS2.

Versatility is the strongest suit of the DJM-750MK2: Want to mix with Rekordbox DJ? Just hook it up to your laptop. Want to spin with DJ media players? Plug them in. Want to spin with analogue vinyl? It can take up to four turntables (Carl Cox, is that you?). Thinking of adding a raft of hardware effects to your DJ gigs? The Send / Return section can handle it, no problem. It may lack the additional digital connectivity of the DJM-900NXS2 (eg Ethernet DJ Link, S/PDIF, a second USB port), but it’s well-suited for practically all standard DJ-related tasks.

If you’re already a pro or club DJ, or if you aspire to become one, the DJM-750MK2 is as close to the flagship DJM-900NXS2 as you’re going to get without spending double, and is a fantastic mixer for a serious home DJ or gigging set-up.