WeDJ accomplishes what it sets out to do: it’s a streamlined, easy-to-use app that provides a simple portable DJing solution. The more intermediate features can be a bit clunky to access at times. Nonetheless, WeDJ gets the job done and should be enough for those curious about tablet / phone DJing. As of now, though, it just doesn’t bring anything new to the iOS DJing table.

WeDJ is a two-channel DJ app. It’s got a three-band EQ and volume fader per channel, and it also has a crossfader for fading between the channels. There are auto and manual loop controls, a sampler, a combo FX X-Y surface that you can customise, as well as six Pad FX. The software is available as separate downloads for the iPhone and the iPad – it costs US$0.99 and US$4.99 respectively. There is no difference between the iPhone and iPad versions, but you need to purchase the one that’s native to the device you’re using.

You can plug in your earbuds if you want to just play around mixing, or you can get a DJ splitter cable if you want to connect your iPhone or iPad to a pair of speakers and your headphones. If you aren’t familiar, using a DJ splitter cable divides the stereo signal into two pairs of mono signals – one pair goes to your headphones (the cue output), while the other goes to your speakers (the Master output).

For hands-on control, you can even use your iPhone or iPad running WeDJ with Pioneer DJ’s own DDJ-WeGO4 or DDJ-WeGO3 controllers. You do away with using a splitter cable using this method (and you get true stereo sound), but you do need to connect a Lightning cable from your iOS device to the WeGO4 / WeGO3 controller.

I downloaded the app to my iPhone 7 Plus, plugged in my earbuds (via Lightning I may add, since Apple made the “brave” move of removing the headphone jack) and got going. 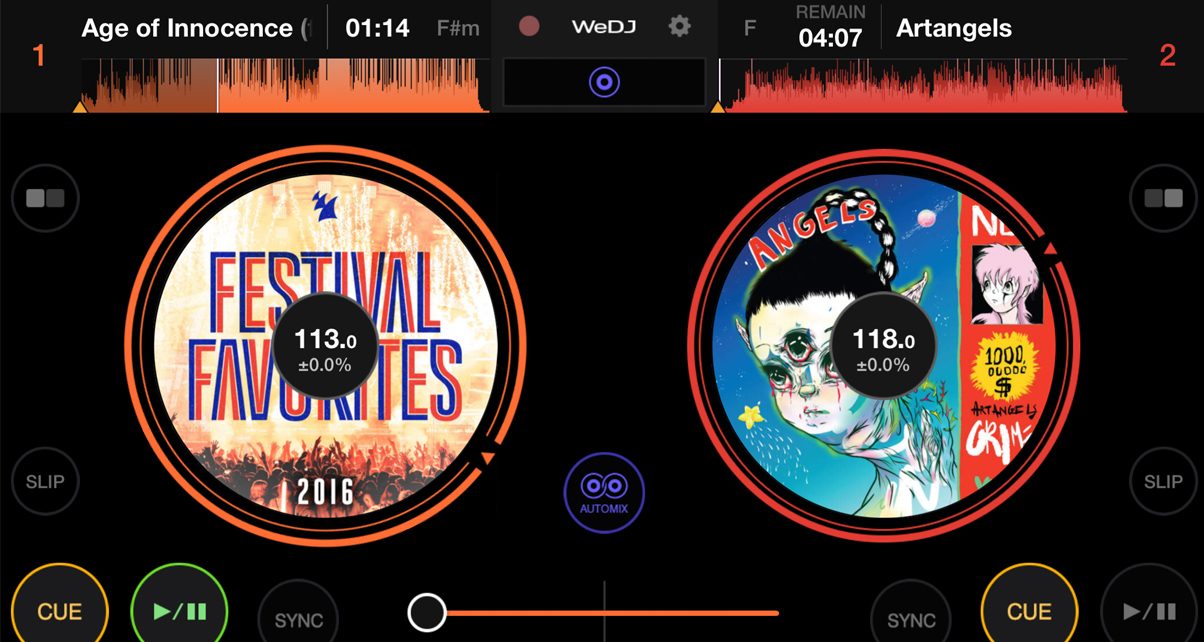 WeDJ has a simple interface – on startup, you’re presented with two deck platters, cue, play/pause, slip, and sync controls, plus a crossfader. You load tracks by tapping the top portion of either deck, which will then list songs stored on your iOS device. Tapping a tune loads it, and the album art fills the platter – you can run your finger through this platter to scratch or fine tune the position of the playhead for placing a cue point or hot cues. The top of the deck shows you the entire waveform, which you can scrub through using your finger. Hit the play button, and you’re off to the races.

Do the same for the right deck – if you’re using a DJ splitter cable, you can preview your next track by hitting the headphone preview icon hit the sync button to lock both tunes up tempo-wise then use the crossfader to fade the new track in – wash, rinse repeat.

Many casual and just-for-fun jocks will be happy using WeDJ this way, and the app does get the job done. But for the user who wants more than this, WeDJ has a couple of features on offer: 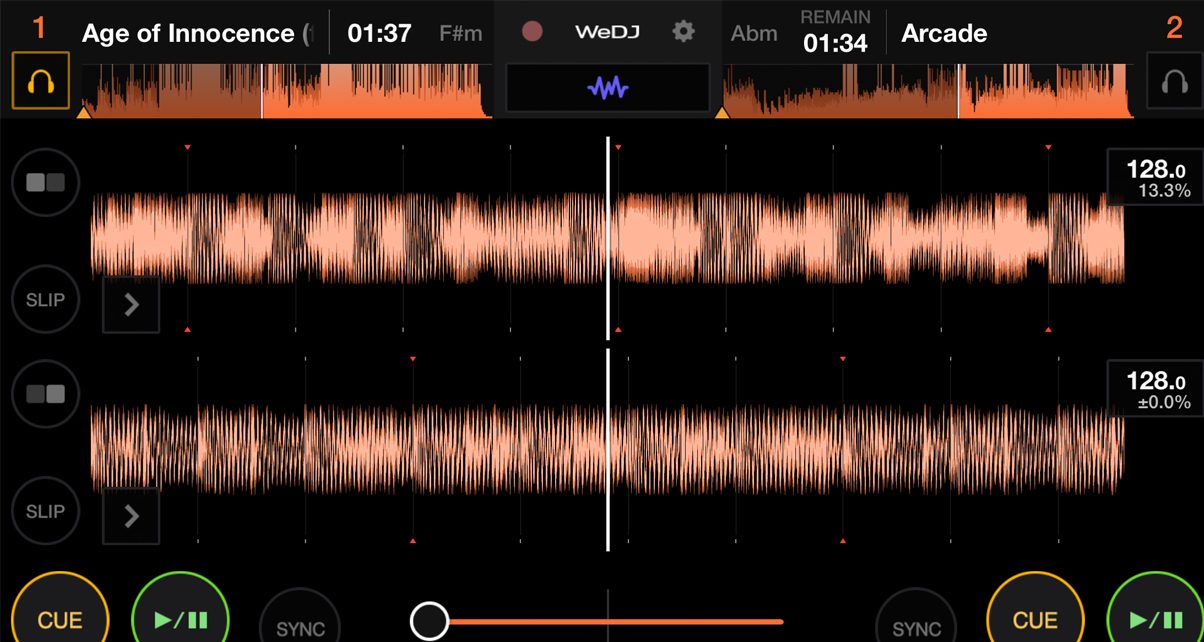 While the platter / album art view is the default of WeDJ, you can change this according to your preference – there’s a parallel waveform view that stacks both of the decks’ waveforms on top of each other for easier visual beatmatching (and you can do that, thanks to the pitch faders and tempo controls), and there’s also a vertical waveform view if that’s more to your liking. 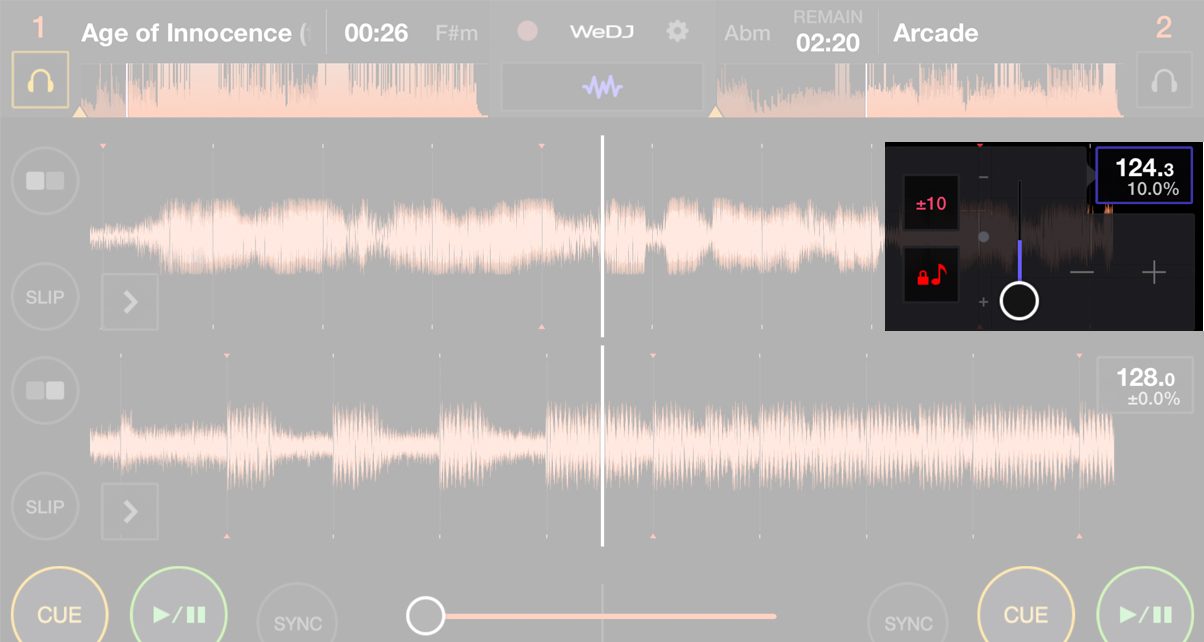 WeDJ comes with manual beat matching controls so you don’t have to hit that sync button. It has a tempo fader with keylock so that the musical key doesn’t change when you speed up or slow down a tune, and it has pitch bend buttons for momentarily speeding up or slowing down a track. Of course if you’re using a DDJ- WeGO controller you can do all of these on the controller itself. 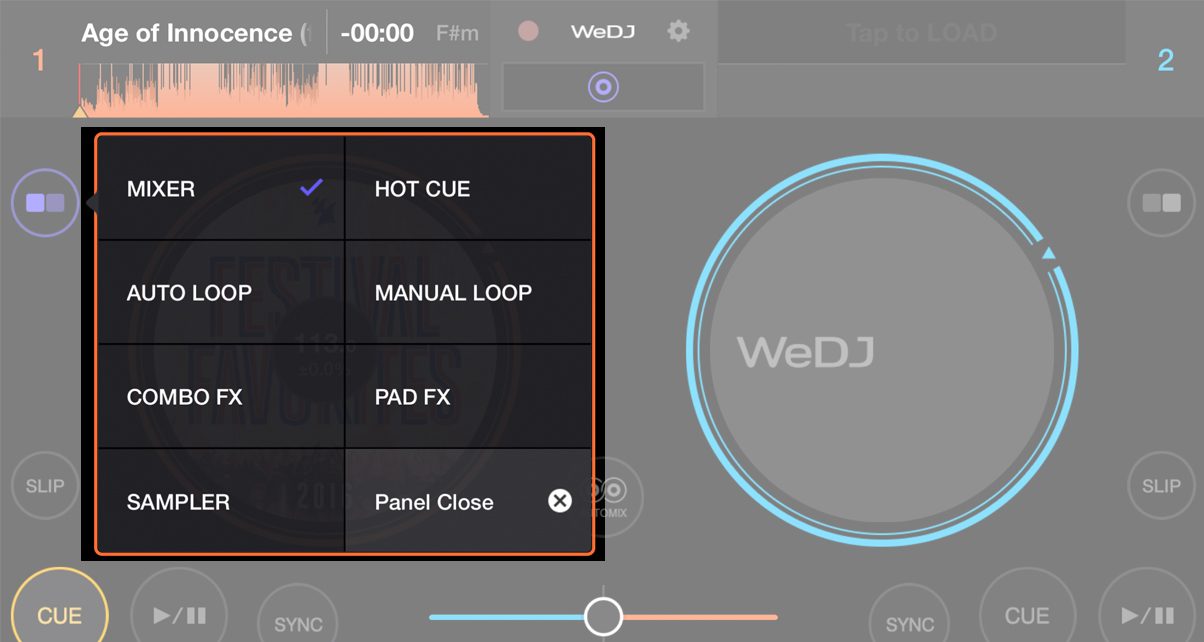 Pioneer DJ has done a good job of keeping the main interface clutter-free and simple for casual users. That means, however, that if you want to access all the other controls, you’re going to have to do so using a pop-up panel, and this is where it gets a bit tricky… 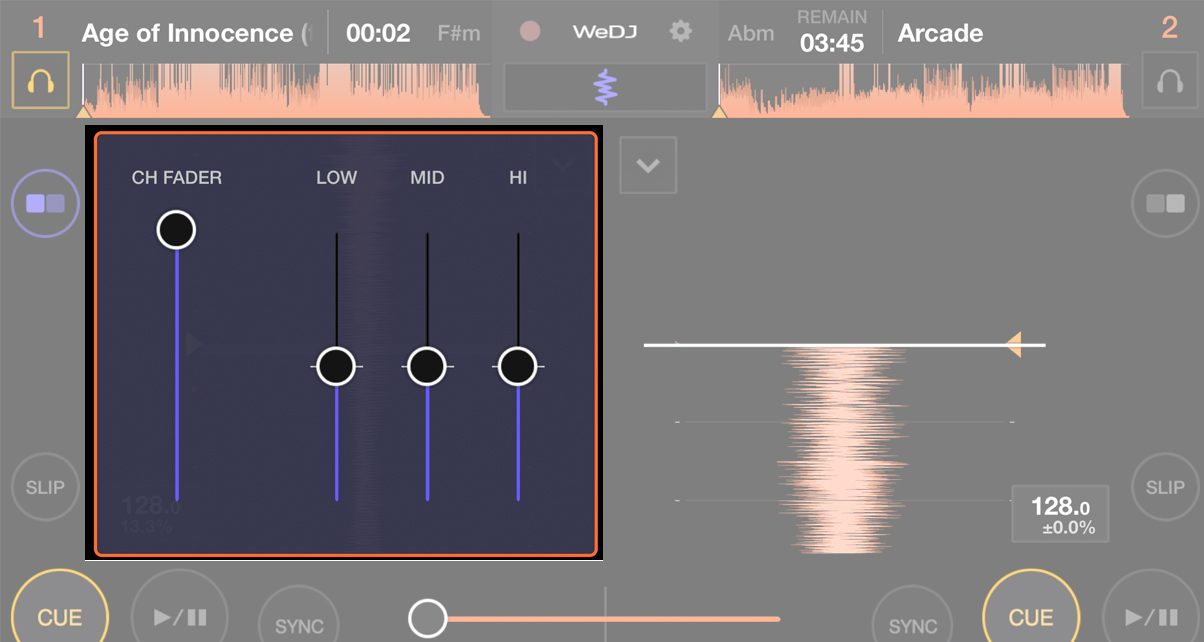 The first panel is the Mixer, which has a channel fader and a three-band EQ (low, mid, and high). I would’ve preferred to have had the volume faders in the main interface instead of having to go through menu page and then choosing the mixer panel. It just feels less intuitive, and it takes a split-second longer to do something simple. 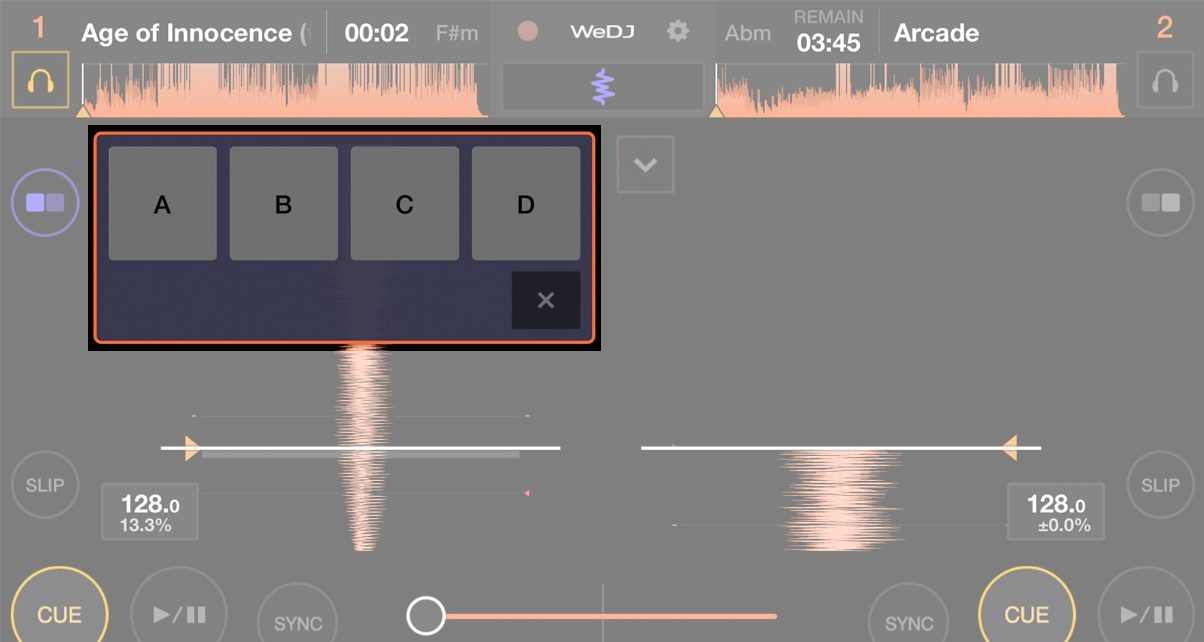 There are four hot cue pads in WeDJ, and they’re stored in a panel menu. I would’ve wanted these to have been somewhere on the main interface as well instead of having to go through additional menu pages just to access them. There’s a Slip button on the main interface – why not swap that out with hot cues instead? Makes more sense to me, since I’m pretty sure that you’ll be pressing hot cues more than the Slip button during a set. 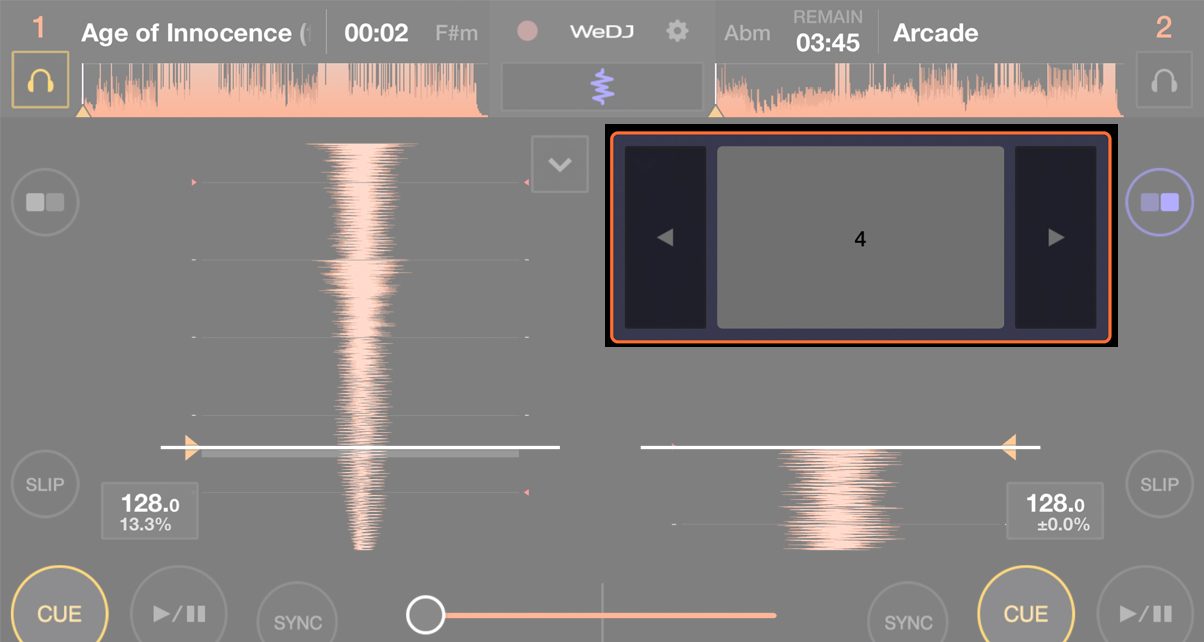 There are two panels for looping: Auto Loop and Manual Loop. I’m fine with “secondary” controls like these being stored in a menu page, so no huge gripes here. They work as they should. 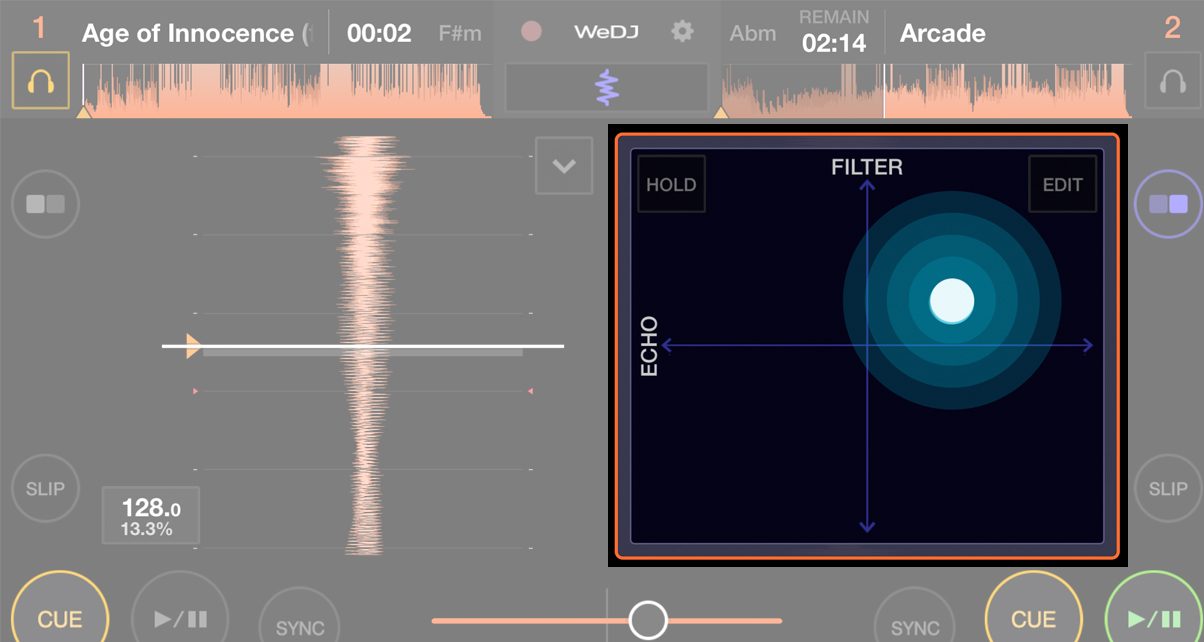 This is where touchscreen DJ apps really come alive. The Combo FX panel consists of two selectable effects placed on an X-Y axis. Running your finger across the quadrants yields varying degrees of the effects you’ve chosen – for example, having the echo and the filter effects on it lets you create filtered delay trails that are cool for punctuating build ups. 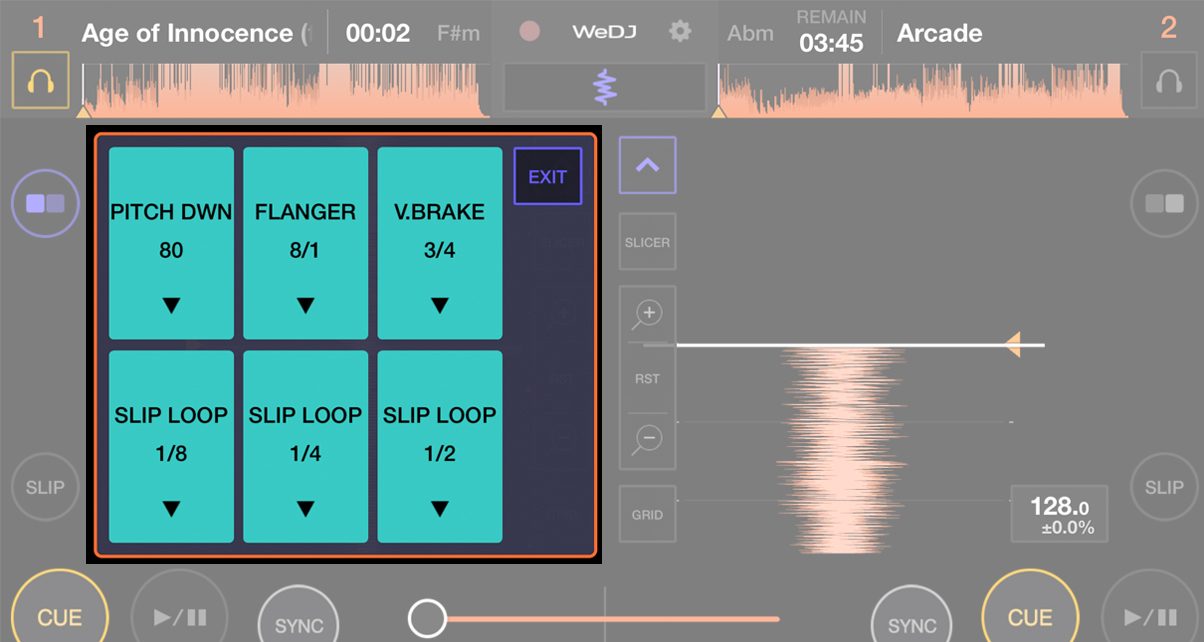 The other effects panel is Pad FX, which give you six pads that you can assign different effects to. Pressing the pads applies the effects, and you can also set these pads to “hold” mode which turns the pads into on/off buttons for the effects.

There are three Release FX, namely Vinyl Brake, Release Echo, and Back Spin. These basically stop the currently playing tune so you can switch on over to the next one. I like using Release Echo and Vinyl Brake for switching music genres or transitioning between tunes that have wildly different tempos.

Apart from these, there are 15 “normal” effects, including Slip Loop, Echo, Spiral, Reverb, Pitch Up, Pitch Down, High Pass Filter, Low Pass Filter, among others. Effects like these are part and parcel of most DJing apps these days, so there really isn’t anything special about them. 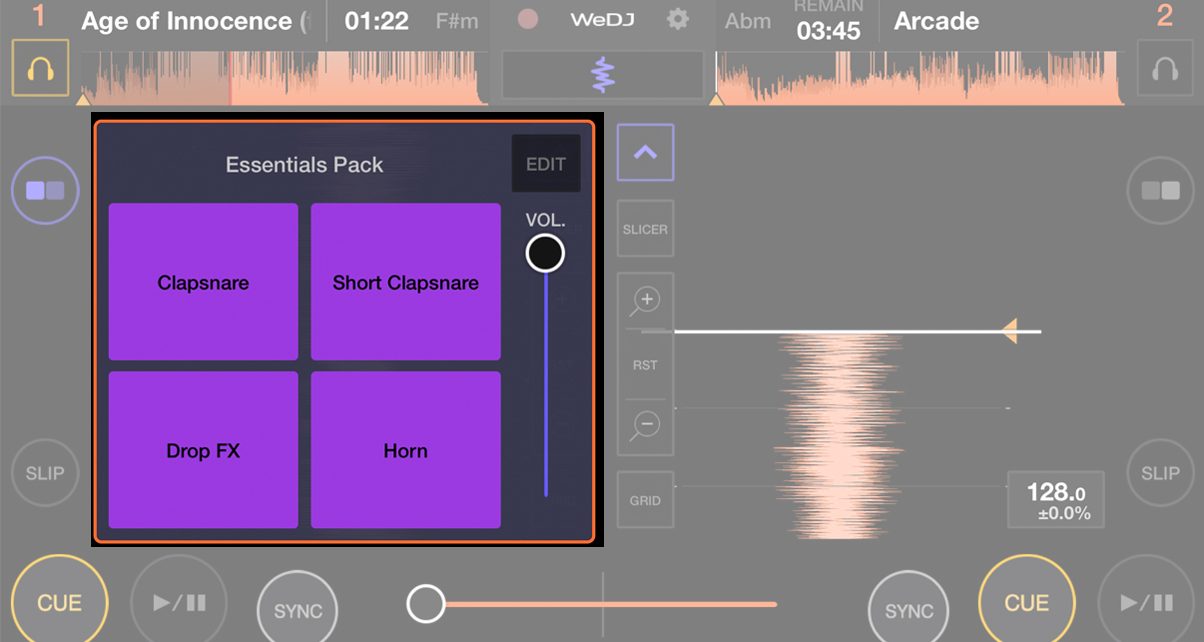 There are four sampler pads in WeDJ, and you can load sounds onto them from the four sample packs that ship with the app. These range from drum sounds, sound effects (Air horn anyone? No? Yeah, thought so…), and even voice snippets and shouts. They aren’t life-changing effects, but they could be fun to use depending on the situation. 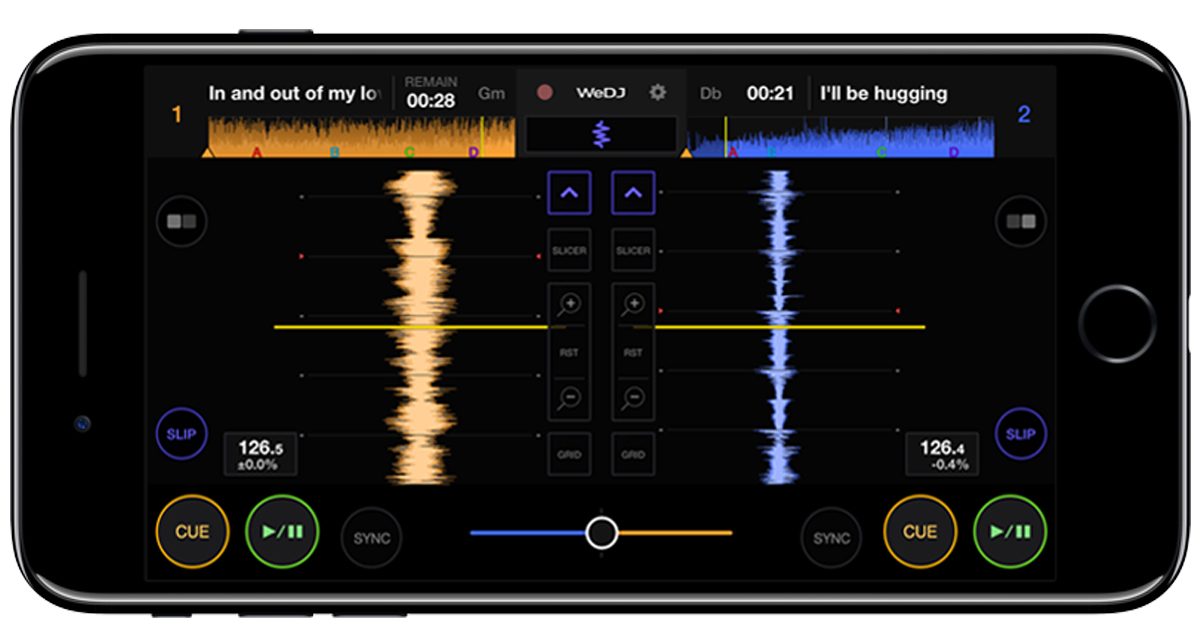 If you’ve got the parallel or vertical waveform view selected, an additional dropdown menu appears that lets you engage Slicer mode, zoom in and out of the waveform, and lets you adjust the beat grid.

You can use WeDJ with the Pioneer DJ DDJ-WeGO4 and DDJ-WeGO3 controllers. This lets you have tactile, hands-on control of WeDJ if using a touchscreen to mix isn’t your thing. I found the integration tight, especially with the jogwheels. Apart from the physical controls, using these controllers with WeDJ also gives you stereo Master outputs, stereo headphone cue (with 1/4” headphone jack), and a 1/4” microphone input as well.

This makes your WeDJ set-up a little more grown up, however if you want all that connectivity and tactile control, you may want to consider using Rekordbox DJ on your computer, which is Pioneer DJ’s laptop DJing solution. You’re taking along a controller, DJ headphones, and all those cables, so why not take your laptop along for the full digital DJ experience?

WeDJ accomplishes what it sets out to do: it’s a streamlined, easy-to-use app that provides a simple portable DJing solution. The more intermediate features can be a bit clunky to access at times, so if you’re considering using WeDJ for anything other than a house party or messing around while having a cup of coffee, you’ll at least want to use the DDJ-WeGO3 or DDJ-WeGO4 controller. Buying these controllers, however, means that you can also use Rekordbox DJ (it ships with the DDJ-WeGO4), so why even use WeDJ at all if you’ve spent this much already? Personally, I’d rather go for the fuller digital DJing experience with my laptop in tow. Speaking of Rekordbox DJ, it’s worth noting that at the time of this writing, there is no way to sync your Rekordbox library with WeDJ – it simply pulls the music you’ve got on your phone or tablet, whether loaded via iTunes or purchased and downloaded via the iTunes Store app. To put it simply, WeDJ is a standalone app and has nothing to do at all with Rekordbox.

I don’t want to sound jaded, but at this point it’s hard to be amazed at an iOS app that lets you mix songs together flawlessly while applying effects and letting you throw in the odd sample. It’s just the norm for phone / tablet DJing (and digital DJing in general) these days.

I’d be floored if this app came out in 2012, but most of the features are now commonplace among mobile DJ apps and there really isn’t anything that stands out here. While it’s fun to use and it does appear to be quite stable (haven’t had any crashes yet), there just isn’t anything special about WeDJ.

One thing that I’d like to see in WeDJ is music streaming – djay Pro has Spotify, and Mixvibes Cross DJ has SoundCloud. Rekordbox DJ brought Pulselocker onboard, so seeing Pulselocker as a streaming option on WeDJ would give it something special that the other DJ apps don’t have.

Nonetheless, WeDJ gets the job done and should be enough for those curious about tablet / phone DJing. It wouldn’t be fair to write this off as “just another DJ app” – it’s still very much a version 1.0 product, and there’s room for innovation since Pioneer DJ has effectively laid a solid foundation for its iOS platform. As of now, though, it just doesn’t bring anything new to the iOS DJing table.