Train Your Ears is an app that aims to help sharpen your EQ hearing and detecting skills. It’s useful for intermediate and advanced DJ producers who already know the basics of EQing and the audio frequency range. There are tons tests and you can even make your own, and the biggest advantage is you’re able to use any music in the tests whether they’re on your hard drive or through a streaming service. Not for new music makers, but certainly one for the DJ/producers wanting to level up their EQ knowledge and ears.

One of the great joys of producing music is that there is an almost infinite amount of techniques, knowledge and skills to learn and master throughout your entire journey. It’s the reason why even the biggest DJ/producers of our generation are still practising and honing their skills in the studio. Music takes a lifetime to master, and producing and creating it is no different.

Legendary music producers and audio engineers are lauded for their “golden ears” – that intuition for knowing what sounds good and, more importantly, spotting what sounds bad and knowing how to fix it. There are many things in production that can go wrong, but one of the most crucial phases is in mixing where the engineer adjusts volumes, adds effects and balances the entire project based on the overall aesthetic and audio goal. One of those effects is EQ, and a great engineer can turn a subpar recording into an good (or even great) one, while an engineer who doesn’t know what he’s doing can really tarnish a fantastic production.

This is why mixing and EQing is one of the key skills a DJ/producer will want to get to grips with and become proficient in. In the past, that meant reading up a lot about EQ techniques and spending hundreds and even thousands of hours behind a mixing desk under the watchful eye of a professional engineer who can guide you. These days you’ve got online learning options and tools that can speed up the process: Train Your Ears is one of them. It’s an app that tests and strengthens your EQ sense: the way it works is it boosts / cuts a portion of the frequency band, and you have to guess which frequency that is.

It works on PC and Mac and costs US$57. I downloaded the app and installed it on my system. 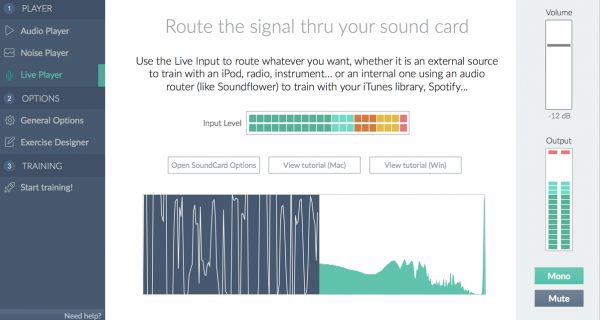 Train Your Ears has three sources for audio: Audio Player lets you add music from your hard drive, Noise Player generates white or pink noise, and Live Input lets you pick audio coming from your computer’s sound card including mics and external devices, as well as playback from Spotify, YouTube and so on.

You then pick what kind of training exercise you’d like to work with. There are two categories: Guess

Mode has you guessing which frequency is being equalised, while Correct Mode challenges you to pick the frequency that has been equalised, and then you have to either boost or cut it to return it (or “correct” it) to the original signal.

The concept is simple, but the tests are tough: At my first try I ran around 10 Guess Mode tests and got around seven correct which was just passing. I did even worse in Correct Mode, getting just five right. Clearly I needed more training! I spent a few more days with the app and while my score hasn’t improved dramatically, my awareness for spotting which frequencies are being modified was heightened, at times almost instantaneously. I suddenly understood what the difference between a boost in 1kHz and 2kHz sounded, as opposed to just something I read on an online forum or some book.

And that’s the greatest benefit of using Train Your Ears: expecting to become the next Chris Lord-Alge or Bob Katz (legendary audio and mastering engineers respectively) after using this app is an impossible dream, but I guarantee that you will suddenly have your ears (and eyes) opened to the differences in the audio frequencies. It’s like having a veil pulled and suddenly those numbers and words (“too woolly”, “too muddy”) have an aural component attached to them that your brain can make sense of as opposed to just being words on a page.

It’s not for everyone: the beginner DJ/producer may not have enough fundamentals yet to be able to dabble with the technical aspects of Train Your Ears, while the casual music maker probably won’t bother at this stage in his or her career. Instead, it’s for the more experienced producer who wants to understand why his mixes don’t sound good in the car when it sounds good at home, or for the advanced creator who sends her mixdown to a mastering engineer and receives feedback on how to improve her mix (eg “Too much mud at 500hz, needs a bit of air around 12kHz”).

Overall, a great niche learning tool that will teach you skills you’re going to use for the rest of your production life.