There’s no contest any more between vinyl and MP3 DJing, despite any misgivings die-hards may have about making the switch. Here’s just five reasons while I’ll happily argue the point with anyone who’s got the time (and who doesn’t mind losing an argument!):

1. You can have all of your tunes with you everywhere you go
This is the biggie. The biggie with digital cameras over film cameras was: You don’t have to wait see your pictures. With MP3 DJing, it’s this simple: you can have all your tunes with you everywhere you go. Of course you still need to plan your sets, but to have that “I know what would mix well into this!” thought, and not have it followed by “Shit, I haven’t got it with me…” is, for me, the real big one.

(Actually, when I was a vinyl DJ, I knew I wouldn’t have that old tune that had just occurred to me with me. So in reality, for a long time after switching to digital, I used to have exactly that feeling, then suddenly realise that actually, wahey!, I had ALL of my tunes with me. This joy was then invariably followed by the thought “digital is the way forward, now why won’t everyone else realise it?” )

2. You can locate any tune immediately
Searching digitally is a great thing. With modern DJ software such as Serato ITCH, typing three or four letters, or a year, or a genre, or looking at last week’s set list, all means you can find any tune in seconds.

Now, personally I was always proud of the way I could find a tune in my record box fast. But that was out of say 80 tunes (or 160 if I had two boxes with me), and it still often took a minute of crouching down out of sight of the crowd, and out of touch with my club night. Digital?  You can search 50,000 records in sometimes 2 or 3 seconds. No contest.

3. You don’t have to put your valuable tunes into the hold luggage when you’re flying
I remember when I used to play regularly at U2’s Kitchen nightclub in Dublin, which involved a quick flight from Manchester airport over the Irish Sea. At that time (1999/2000) “DJ culture” was massive, and it was normal to see half a dozen other DJs with their carefully packed and weighed record boxes too.

And all of them had that ashen “I spent most of my money and half of my life finding these tunes, and now I’m going to let them out of my sight?” look on their faces. Bags go missing. that’s bad enough. But records? To start with, they really are truly nickable, and secondly, what good is your tunes turning up a day later when you’ve just missed a DJ gig? Unthinkable.

Being able to tuck your laptop, controller, headphones and a change of clothes into a cabin bag and jump on a flight, secure in the knowledge that 1) You can be off the plane and in a taxi in 10 minutes, but more importantly 2) All your kit and tunes won’t leave your sight, is a great thing.

4. No relying on record companies to send you upfront and hard-to-find tunes
Back in the 90s and early 2000s, to be on the record company’s promotional lists was a major aim of many working DJs. It took years of effort to get in with all the right labels and promotional companies.

It was worth it, though: You got loads of juicy hard to find, upfront vinyl mailed to you practically daily. Lots of never-to-be-released exclusives, all for you! All you had to do was fill in reaction sheets to the tunes and post your top tens to various publications on a weekly basis. I used to get scores of records a week for nothing, and they made a major difference to the quality of my sets.

Thing was, the bigger the DJ, the more freebies. So while my DJ pals and I got some great music, sometimes only 5, or 10, or 50 of something would be mailed out, while we were only in consideration when they had maybe 100 or 200 copies of any given new tune. So if you weren’t in the top 5/10/50 DJs for that genre, no free tunes. You heard the tunes on the radio and in the clubs, but no copy of your own to play.

And of course, newer or smaller DJs got nothing at all, and were reduced to trawling the second-hand record shops for copies that bigger DJs had off-loaded for cash because they didn’t want to play them in their own sets.

While CDs and vinyl (don’t get me started on CDs…) are still mailed out, that stranglehold is now well and truly broken. Now it’s completely about connections that anyone can make online by putting the hours in to get to know their favourite artists and labels – and more to the point, by keeping their ears to the ground for new artists on MySpace etc. Of course, big DJs still get exclusives – but if you’re an MP3 DJ, it’s a far more level playing field than ever it was.

5. You can remix a tune on the fly without having to buy two copies
I often used to buy two copies of a record so I could create effects and mixes to make a tune my own. Whether “echoing” vocals by mixing them a beat or two apart all the way through, or lengthening breaks, or dropping acapellas over remixes, or removing dodgy bridges, such techniques are now far simpler – simply drag the MP3 onto both decks (or four if your controller allows it).

So what conclusion can we draw from the above? It’s all about the music, stupid!

No coincidence that all of these points are about music. Nobody cares what you’re playing on nowadays. If you can deliver a better soundtrack with what you’re using, then the technology you’ve chosen is working for you. This to me will always win out over any other consideration, however you choose to DJ.

What do you think? Are you a recent convert to digital from vinyl? Do you think vinyl DJs are a dying breed? Or do you think real DJing only happens with two black plastic discs and an analogue mixer? Let us know your thoughts below.

Find out about all the benefits of joining our FREE DJ-only member’s club.

6 Reasons Why Digital DJs Should Learn To Spin With Vinyl 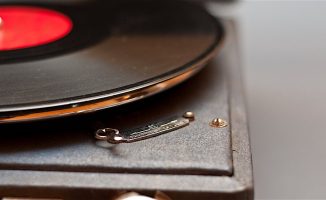