I hope you’re as obsessive as I am about ensuring all the information about your DJing tracks is correct – title, artist, album and so on. After all, it’s pretty much essential for effective use of DJ software. But more than that, it has the added bonus of making whatever general music playback software you use work better too.

And if you’re an iPad / iPhone / iPod Touch user, there’s a wider choice than just the standard and rather uninspiring Music app to choose from. You’ve done the work on your collection, so why not use your downtime to get to know your music a bit better? Here are three alternative music library apps that will help you to do just that.

This app was previously only available for the iPad but has recently been resized and released for the smaller screens of iPod Touch and iPhone. Normally any app that includes such wording as “bringing back all the warmth of analogue harmonics” in its description is an immediate no-go for me. If I want an authentic analogue sound, I’ll drop the needle on my original vinyl rather than placing an effect or sound overlay on top of a digital file during playback. However, the association with Air Studios made me rethink and I decided to investigate.

The first thing that hits you is that the app is well designed and features gorgeous graphics throughout. To select a track to play on the deck, you trawl through wooden crates (accessible via the “Crates” button at the bottom) which look as if they’re positioned on a polished wooden surface. It’s strange to describe, but there’s something reassuring about digging through crates – even if they’re virtual ones!

The only downside for me was that I have a huge number of tracks on my iPad so scrolling along the crates takes some time and there’s no way to quickly jump from the first crate to the last (or anywhere in between). The inclusion of an index would be a useful addition in a future update. You do get the option to sort the crates by Genre, Artist, Album or Song (via the Setup screen) and also search.

By pressing on the album artwork, the track listing is displayed. Click on a track and the vinyl is loaded onto the deck, the “On” red light in the corner is displayed and the tonearm moves up and across onto the groove which represents the start of your selected track. There’s even a noticeable soft “vinyl-contact” type of sound when the needle drops down.

If you’ve loaded track three from a five-track EP you will immediately notice that the needle is placed at the start of the third track segment on the vinyl – a clever and neat touch to closely represent the vinyl playback experience. Of course, this app is for playback only so no scratch functionality here – a bit like my parents’ prized turntable from the mid-70s!

The other method to play audio back through this app is with the mixtape functionality. This takes the form of an old (but again stylish) cassette deck, complete with counter display and brushed aluminium finish. The cassettes along the bottom represent “Mixtapes” – by default they show your playlists.

You can create new mixtapes here and add tracks to them using the search functionality. Unfortunately the app doesn’t stop you adding the same song more than once to the mixtape, but you can always delete the duplicates if you wanted. There’s also the obligatory social networking tie-in, allowing you to share the news that you are playing a mixtape via Facebook and/or Twitter.

I really enjoyed using this app, the interface is beautiful and there is the promise of alternative skins and AirStream with future updates. I’m not sure that the app does achieve what it sets out to regarding “analogue harmonics”, however it is a very easy and visually pleasing way to play your music.

This free app aims to give your more than just a different way of looking at your music library and audio playback on your iOS device. It provides a wealth of varied information about each artist whose tracks you’ve got in your library.

When the app loads up, it scans your music library (I’m wondering whether over 5,500 tracks on an iPod Touch is a good idea!). The main page shows your music library as album covers on a shelf. You can scroll across the row to view other albums in the same group and scroll downwards to view different groups.

The information displayed in the app comes from a variety of sources including YouTube, Wikipedia, LyricFind, Rovi Corporation, DeviantArt, LastFM, Twitter and various RSS feeds. While most of these sources are popular, they are not always correct and you also may see some unrelated facts about something which contains the same words as the song or artist.

Unfortunately, with a music library featuring mostly old funk, rave or drum & bass the app often comes back with a “No Data” screen, but for the majority of more mainstream artists the app is quick to display a number of different (and occasionally interesting) nuggets of information.

Personally, I’d never contemplated searching YouTube for interviews with artists in my Music Library, but it does provide an added dimension to your library than simply audio playback.

If you wanted to sing along to the track playing, there’s a small feather icon along the bottom which will try and find the lyrics on LyricFind for you. Before anyone asks, I rarely sing along to anything!

The app has been designed for the iPhone / iPod Touch, but with a smaller screen the detailed information feels a little cramped. The smaller screen focus does mean that it is more likely to get used while on the move and in that respect, it would keep you occupied for a while during journeys.

I like the idea of this app, the premise of providing you with more information about the artists on your device and also the possibility of uncovering related artists which you may not have heard of. If you are keen to learn more about the artists on your device, then this is a good starting point. The app is still in its infancy at the moment, so I’m intrigued to see where it goes next and whether it becomes a paid app.

This is another free app and if you haven’t heard or seen this app then you are missing out. It has been around a while now and is for the iPad only. This app takes a completely different view of your music collection by displaying it as a complex universe with a myriad of heavenly satellites representing artists, albums and tracks.

The pinch gestures allow you to zoom in/out of the constellations and swiping your finger can rotate the displayed items around the central point. If you are on an iPad 2 then the gyroscope can be used to navigate around by tilting the device. You can view the universe grouped by album, artist or playlist with a handy index displayed along the bottom of the page.

As you zoom in and click on an artist name, the display drags you into the artist’s galaxy with the artist as the star type body in the centre. All albums by the artist are shown as planets in orbit around the star – the earliest albums (and date unknown) closest to the centre and more recent albums at the outer edges. The more albums by that artist, the brighter the star will appear.

By clicking on an album you are zoomed in once more, this time into a view featuring the album ‘Planet’ in the centre with the tracks represented as orbiting “Moons” in order with track one closest to the planet. Finally, from here you can play a track by clicking on it.

As you can see, it’s not a simple way of playing music back through your device; however it is totally gorgeous to look at. The level of detail the developers have gone to in order to display the music library as an entire universe is incredible. The “Star” objects (representing artists) have an authentic looking haze around them. When looking at the larger view, you get to see dust clouds which you swoop through as you spiral and zoom around the space.

While this interface is unique and breathtaking, I feel the developers may have missed a trick by not providing AirPlay support. This would allow you to view the universe on a much larger home TV screen.

Despite its few drawbacks, I really like this app. It dares to do something different. When approaching a collection of music from a visual perspective, the obvious approach is to use album artwork to make each piece instantly recognisable. However, if you’re not as obsessive as I am and most of your library is lacking in artwork then this app gives you a beautiful way of viewing and playing your collection.

These are just three examples of how you can browse, listen and learn more about your music collection on your iDevice. DJing is as much about knowing your music as anything, and the best DJs know that any new ways of doing this are to be welcomed.

AirVinyl is great if you long for a familiar look (and perhaps sound). iAlbums is a good choice if you want to investigate further around the music on your device and perhaps discover new artists.

Finally, Planetary stands out because there’s nothing else like it available, and in a bold move away from album artwork and list-based views, you may uncover music on your device you had forgotten about.

There are many more alternatives available, but beware: there are a lot of clunky, ineffective solutions which are less effective than the default Music app from Apple.

Do you have a tip for rediscovering the nooks and crannies of your music collection? How do you like to get to know your DJ collection when you’re on the move? Please share your thoughts in the comments. 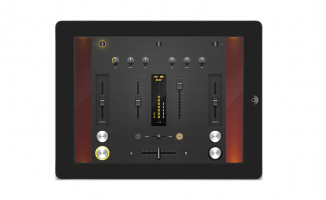 2 Ways To DJ With Traktor & Your iPad