If you’re anything like a regular around here, you’ll know that we love to champion all that’s new in DJing. If something opens up fresh possibilities or gets our craft into places it has hitherto not reached (and even better, into the hands of people who haven’t yet tried it), we are right behind it.

Of course, “laptop” DJing is established nowadays – although it’s still not accepted in some isolated pockets. But mobile DJing (we’re talking with mobile devices, not at your sister’s 18th) is very new indeed. And we think it’s going to be absolutely massive. Here are a few reasons why:

(By the way, before we go any further, this is basically an iOS world at the moment. We’d love to see Android developments, but there’s practically nothing to report on – yet. Don’t bank on that staying the case for long, though.)

One of the main reasons I am spending more time on iOS devices rather than behind my trusty turntables is because they are neat, handheld portable devices which can easily be popped into your bag on the way anywhere.

Last year my journey home from BPM was spent trying out ideas for a mix on my iPod Touch with the DJ Player app. And the more you practise, the better you get (for some people, these may be the only times they get to kick back and do a bit of DJing in otherwise prohibitively busy lives).

Maybe not as obvious as the previous section, but by this I mean the domination by Apple in the mobile touchscreen market means that the potential for apps to be purchased and used by customers is huge.

When I started out, I had to put in the hours at work (after school) to afford the price of some second-hand belt-driven decks and a budget mixer. This was a huge risk, as a teenager my mind was on a dozen things at once so it was easy for my parents to suggest that this was a short-lived but expensive passing phase. (By the way, I got my own back; the following year I saved up for a pair of massive bass-bin speakers which I acquired when they were on holiday…)

Certainly, buying an app for your iPhone for a few dollars will not make you a DJ, but it will provide a platform for you to investigate and learn on, and can act as an introduction to bigger things like the purchase of your first piece of hardware. With this in mind, I’m convinced the use of apps is already helping to produce the next generation of DJs.

This is possibly wishful thinking on my part here, but acceptance and adoption of iDevices by several aspects of DJ culture is happening right now. Last year, DMC launched a very successful online version of their DJ Mix championship with participants entering via YouTube and the audience being invited to vote. Among the entries there were some using TouchOSC, djay and Griid.

The introduction of CoreMIDI (the ability to use the Camera Connection Kit with an iDevice to send and receive Midi signals to another device) by Apple in iOS 4.2 in 2010 resulted in a flurry of excitement among musicians, as you could finally trigger sounds from an iOS synth with a USB Midi keyboard.

It also allowed the DJay app to work in conjunction with USB Midi DJ controllers like iDJ Live and the Vestax Spin. Since the arrival of CoreMIDI more of the large manufacturers are now joining in with producing hardware to be used with DJ apps or using apps to accompany their hardware:

It will be interesting to see who will follow suit next.

I have a love-hate relationship with Apple’s App Store. But despite its drawbacks, it seems a much better proposition than Android’s MarketPlace – and overall, it provides a painless way to audition DJ software. The App Store contains such a wealth of DJ apps that on first glance it can be daunting when choosing your first one.

There is a complete range for all experiences, from the novice (djay, Quixpin and many more) to the professional (DJ Player/Red Bull BPM DJ, Mixr). Not all apps look the same, so if you like replication of physical hardware then djay and Mixr both do a very good job at turntables. If you prefer a waveform focused view then Cue Play DJ, FutureDJ or Sonorasaurus Rex might be your preferred solution.

The success of an App Store depends firmly on the quality of apps available and the ease of finding and purchasing. In general, it does well on all three, implementing a stringent review process before an app can even make it there.

As the iDevices mature and more features become available, app developers are close behind making full use of the new facilities available.

When the iPad2 was released, a new version of djay quickly followed providing keylock and improved beatgrid functionality. DJ Player has always made use of the WiFi capabilities to broadcast either the Master or Cue signal to another iOS device running the companion NetOut app. There are a few DJ apps which use the accelerometer (this detects device movement); DJ Player can use this on the FX pages to move the icon around the X-Y screen – a bit like rolling a ball on a tray.

This is all fine – but how about a use of the camera in a DJ app? Well, in the latest version of DJ Player you can use the camera on iPad2 to set the background – a neat touch if you’ve connected the device to a projector/TV to show the audience what you’re doing.

DJing using iOS devices is still very much in its infancy, but the outlook is good. Apple is constantly evolving its product line, app developers are pushing the boundaries, and traditional DJ organisations are now getting involved.

There are drawbacks to any DJ solution (I’ll be discussing the iOS issues in another article), but DJing with iOS is off to a promising start. Even if the main thing it’s achieving right now is introducing more eager DJs to the fundamentals, then that has to be a good thing for the DJ community.

Do you use iOS DJ apps? Have we missed out any positives here? Are there any “DJ app” hidden gems in the App Store? Please let us know your thoughts below. 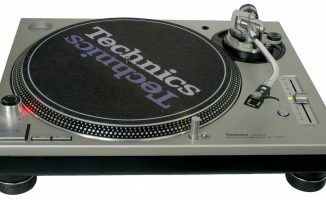 Enough Of This DJ Snobbery!