Do you like the idea of a professional-feeling media player that can control four decks of Traktor or Virtual DJ, play music from USB or external hard drive, and let you mix traditionally with CDs as well? Something that straddles the line between digital/home and analogue/club gear?

That’s the promise of Reloop’s new RMP-2.5 Alpha cross-media player, which we review here. It throws in a few higher-end features such as multiple device DJing from one USB source, and touch-to-cue scratching, too – and all for around €349 in the shops.

The player has a pleasing, quite minimal look, with curved edges left and right. While sporting a plastic casing, it nonetheless has a quality feel, with a nice semi-matte finish. The chassis is metal, and the player has a decent weight to it. The feet are similar to those you’d find on turntables and can be adjusted by screwing them clockwise or anti-clockwise.

The jogwheel is large (it’s one of the benefits of such players for those who can’t get used to the much smaller jogwheels typically found on Midi controllers), and while it lacks any of the fancy lights found in the centre of some other manufacturers’ jogs, it has a good quality rubber indented edge and textured metal top. Feel-wise, it is more similar to other Midi controllers rather than the Pioneer CDJ-style, being free spinning and mechanically silent.

The play/pause and cue buttons, however, are very Pioneer. The other buttons are a mixture of rubberised and plastic. The pitch fader is long thrown with a middle-click, and there are two small knobs for search and switching through menu items. The former springs back to centre on release and the latter is stepped, with a push-down function too.

The display is pretty typical of cheaper CDJ-style players, being LED with lots of mode indicators crammed in, and having a scrolling ID3 tag information section in the middle. Connection-wise, there is a USB top left, and round the back (nicely indented) are RCA outs for audio, an 1/8″ TRS headphones socket (nice bit of flexibility there), a USB for connecting to a computer, a fader start/relay socket for attaching to other Reloop equipment, and of course an AC input and a power button.

By connecting the unit to your computer and importing the Traktor or Virtual DJ mappings (available from the Reloop website), the player operates as a Midi controller. A bonus is that it’s class compliant, meaning no need for drivers.

It is simple to switch it into this mode by holding the “mode” buttons down (however, the instructions indicate that you should use a different button, so I had to find this out by trial and error…), and once there it is equally simple to switch between controlled deck. This way, you can control four decks in either piece of DJ software from the one controller.

The provided mappings are OK, but not perfect, as we’ll see. You get all the usual functions: file browser, play/pause/cue, cue points, basic looping and a handful of other bits (key lock etc) – and as it’s all standard Midi stuff, you’re free to map and remap to suit your needs. The pitch fader is really good – it’s 14-bit Midi and controlling pitch +/-.01 is simple, making for easy manual beatmatching.

For me, though, such mappings and thus the devices they control succeed or fail on the quality of the jogwheel mapping, as this is often the hardest bit for you to map yourself if you don’t like the way it behaves. In this instance, both with Traktor and Virtual DJ the jogwheel mapping is passable (it works, it sounds fine), but not perfect.

My main gripe is that spinbacks aren’t possible, because the second your hand leaves the platter, they stop. But also, the nudge function is accumulative – if you hold the edge of the wheel and move it slowly forward or backward, instead of slowing down the tune depending upon how quickly you’re moving the wheel, the tune speeds up or slows down more and more, until it’s way faster or slower than it should be. Thus it’s not possible to “ride” a tune a bit faster without continually touching and removing your fingers from the wheel.

Neither are dealbreakers and you could get used to it, but most dedicated Midi controllers manage these items better.

The one major drawback in USB/MP3 CD mode is that the unit won’t play AAC files (Apple’s MP3 equivalent format, the one that music comes in if bought from iTunes). That’s fine if you’ve only got MP3s or WAVs, but if you ever think you’ll want to play an Apple file, the RMP-2.5 Alpha isn’t for you.

However, it does have some nice loop storage/sampler functionality to make up for this shortfall. It is possible to store loops you’ve made on the four “pads” or hot cue buttons, and these can be held even when switching to another music file. In sampler mode, these can be played back over the playing music. The unit can also be set to loop or one-shot the samples.

They can be stored permanently too, and up to four cue points or samples can be stored for up to 500 CDs. If you’re a CD DJ this could be useful, although for it to be truly so, you’d need to be the type of DJ who keeps only a small number of tracks per CD or you’ll soon run out of cue points.

Apart from that it’s pretty much as you’d expect – you can’t set the pitch range to +/- 100 for some reason when playing MP3s, and the pitch adjuster doesn’t feel as fine as with Midi control, but as a CD player for DJing, it is perfectly competent. Touch-to-cue mode lets you scratch from the set cue point instantly, which we liked (the Stanton SCS.4DJ has a similar function).

The RMP-2.5 is a basic, modern cross-media player that covers most bases competently, and for a fair price. It feels solid and professional and has all the major features a CD or USB/MP3 DJ would need. More importantly for the digital DJ, it also offers basic control over four decks of Traktor or Virtual DJ and is mappable to whatever software you wish that allows Midi mapping.

However, compared to the subtleties and functions controllable in DJ software by dedicated Midi controllers, it falls short. Jogwheel performance is only OK (as I mentioned, spinbacks/scratching aren’t quite right, but also I found it over-sensitive on Virtual DJ and a bit laggy on Traktor).

Furthermore, many functions aren’t mapped. As such, I can’t really recommend it as a replacement for a dedicated Midi controller. It wouldn’t make a massive amount of sense to buy, say, two of these and a Midi mixer to use as your control setup for Virtual DJ or Traktor – not least because you’d need a sound card too (the audio can’t be utilised by a computer).

Having said that, though, if you’re a CD DJ who wants the ability to use digital music as well, The RMP-2.5 Alpha makes a lot more sense. You could use two of them and a normal mixer as your analogue set-up, and simply by USBing a laptop into one of them, it could also double up as a basic Midi controller for up to four extra decks of music – great for having access to a full digital library at the same time as whatever music you happen to have on CD.

Alternatively, if you’re a vinyl DJ who wants to add the ability to play CDs and digital music files to an existing vinyl collection, having one of these as a third deck alongside your two record decks and mixer will give you four decks of digital plus the ability to play CDs (and music from USB). Now, for €349, that’s a lot of extra functionality.

The RMP-2.5 Alpha is a jack of all trades. While it doesn’t do anything amazingly, for a decent price it does cover all the basics in analogue, USB and Midi pretty well. If you want all the functionality described above, can live without AAC compatibility and are attracted to paying less for it all than for some bigger-brand cross-media players (players that often don’t do a great deal more), you should definitely shortlist the RMP-2.5 Alpha.

Do you think cross-media players are a viable alternative to dedicated Midi controllers? Would you build a digital DJ system around such devices? Or are they a throwback to a previous age that will slowly become less relevant? Please share your thoughts on the RMP-2.5 Alpha in particular, and such players in general, in the comments. 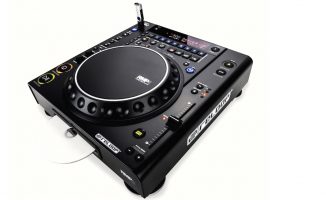