My DJ friends and I are very lucky to play out, sometimes several times per week, occasionally having the good fortune to opening up for some noteworthy DJs. But while we may between us have at least some level of respectable artistic talent, that’s not main reason that we get these gigs.

It’s more that nowadays I am lucky enough to be in a group of people who book DJs to play at events in the area where I live, making it easier to get many of the gigs I want playing alongside these guys. But it wasn’t always like that for us, not by any means.

So as someone who knows this from both sides (as a DJ and, nowadays, a promoter), I am pretty confident that I’m about to speak for most other people who book DJs.

In the following article, I offer up some hard truths for up-and-coming DJs that will hopefully explain why you don’t get any response when you drop mixtapes off, and guide you down the true path to getting the gigs you want.

Accept this: Talent alone is not enough
Allow me to start with a DJ booking request I received recently, from a local DJ wanting to be booked based on their talent alone. His email was outright aggressive, complaining that we had not hired him for his talent and skill after having been sent so many emails by him! But the hard truth is that talent and talent alone is not enough. As once said by US President Calvin Coolidge:

“Nothing in the world can take the place of persistence. Talent will not; nothing is more common than unsuccessful men with talent. Genius will not; unrewarded genius is almost a proverb. Education will not; the world is full of educated derelicts. Persistence, determination and hard work alone makes the difference.”

Folks, it comes down to simple economics; if you have all the ability and talent in the world, however you can’t persuade at least a half dozen or so friends to support you during a set, you’re not going to get booked by us (or likely anyone for that matter). On the flipside, if you can just get your way through a DJ set and sound at least a little fun while not mashing things up too bad in front of 100 of your supporters, then congratulations: consider yourself a career DJ! (I’m not bragging here, by the way: I’m still working on my 100…)

The three ways of getting booked…

You see, there are basically three ways to get booked.

Now number three might sound a bit idealistic, but really it isn’t. Nonetheless it only be accomplished when you are “in the spirit” of doing things – or in layman’s terms, doing it “just for the fun of it”. You’re in the trenches when you’re working on this level, yet this is really the way most of us have to do it.

Why you need to “do it for the fun of it”…
Let’s define it further with a question. You want a DJ booking, yeah? So what are you doing to enhance the electronic dance music business in your local area to make it better for everyone involved? For example, when it comes to sniffing out someone who shows any interest in electronic dance music, I am like a lion stalking its prey during a drought-wrenched summer day on the African plains. I latch on and don’t let go… just kidding (sort of).

But seriously, I take whatever steps necessary to invite my new friend to an event that will have the type of music that I think he or she will like the most. Maybe I get an email address, or we link up on Facebook, or perhaps we swap phone numbers (whoops you’re done for now, look out for those 2am after-party texts!). Then I will politely and diplomatically follow up and get them to an event. It does not have to be one I’m playing at: maybe a buddy is playing or a buddy’s girlfriend is spinning and I invite them to that.

We’re in the business of fun, it’s so easy and it’s not like you are selling them a car. You can just say, “Hey I think you might like the type of stuff we get into… we play really amazing music that is wickedly sick and we all get wasted, dance around all night, and say stupid stuff.”

They are either going to say “hey I’m in!”, or they are going to look at you like you are crazy and run! If they accept, I introduce them to friends, show them the DJ booth, introduce them to who is running the night and take time to get to know each other more. At the end of it all maybe we have a new best friend who comes to our parties and further supports our scene, as well as creating further demand for DJs.

What I am saying is that this is your business, so grow it! Be an ambassador to your passion. Do this everyday with everyone you meet and you will build your dance music empire. If you are not doing this already then I can assure you that unless you’re a talented producer or a popularity king or queen, you will never get a solid booking. You should either quit now or redefine what DJing is to you and change your habits.

Agreed, this continual open awareness of bringing new people in and non-stop scene promoting to all these strangers is related to the popularity method as described above, but you’re promoting your scene instead, and wonderful things start happening when we’re passionate about something we love. Becoming an ambassador and promoting your sound to the world around you will stoke the fire inside you that will attract and draw you to what it is you really want… lots of gigs!

How to make a difference from the outside
Now, you may ask: how do you enhance an already existing dance music scene when you are on the outside trying to get in? Easy – just look around! There is nothing at any one point in time that cannot be improved. For instance, we started our website here in Austin, Texas (www.ElectricAvenueATX.com) as a solution to not knowing about everything that is happening in the Austin dance music community. This is just an example: Yes you could create a website, but you could also start a blog, create an online photo album – whatever.

Just ask yourself a few questions. What business are you in now? What are you learning at college that can be applied to the music business / scene / community you want in on? For instance:

The truth behind why most aspiring DJs play as little as they do
The above is how it happens, DJs, not “hey hook me up! I’m really good”. That’s nearly always not enough. Proactive people get the results, not those who think they deserve them on talent alone.

This is the truth behind why most aspiring DJs play as much or as little as they do. You will play as much as you deserve to play and the quality of the gigs you play will be equal to the energy, love, and commitment you put in to your scene and career.

If you are expecting or feel like you deserve gigs from promoters whose events you never go to because you think your talent will speak for itself, I unfortunately bear disappointing news: you are not going to be playing out.

So go give a little: for each unit of energy you give to others you will get 10 times back. Keep giving, supporting, and promoting until you find yourself where you want to be.

• Christian is a DJ from Austin, Texas, who is also involved in the www.ElectricAvenueATX.com website. Here’s his Facebook Page.

How has persistence worked for you? How has making yourself useful to others come back to get you what you want? I’d love for you to share your thoughts on “getting on by getting involved” in the comments below! 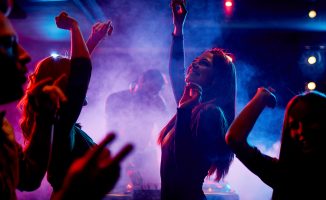 Can Knowing How To DJ Get You Girls?