Musikmesse, which starts this week in Frankfurt, Germany, is the biggest music show in the world. All the DJ gear manufacturers will no doubt have announcements to make, and getting the ball rolling this year is Numark, which we can exclusively reveal is launching a dual CD/MP3 player with a twist – the CDMix Bluetooth. Now, while our core readership of laptop DJs won’t be anything more than curious about this (they’ll be more interested in the Mixtrack Quad, which we can also exclusively reveal today), believe me there are millions of DJs all over the world heavily invested in DJing with CDs. I’m talking here especially about the mobile guys, the wedding DJs – working people whose DJing lives and livelihoods rely on CD units very much like this one.

With the CDMix Bluetooth, Numark has added the ability to mix in a third channel of audio, fed directly from any device capable of streaming Bluetooth audio (ie most smartphones, laptops etc). Bluetooth transport controls are included in the centre of the unit, which also features a padded space for resting such devices. The working mobile DJ can now fulfil any request just by downloading the song and streaming it from their phone. Hell, they may even be able to stream it from something like Spotify! That song at a wedding that the bride simply “must have”, the one that is only on the groom’s iPhone? The CDMix Bluetooth makes playing it easy.

Of course, you wouldn’t want to actually beatmix from a smartphone (there is going to be latency), and you wouldn’t want to mix a whole night that way, but I think this is intended as almost a backup, a “get out of jail” card, so that mobile guys – for whom catalogue is everything – needn’t ever feel caught out again. Whether “creative” DJs would want a queue of people demanding they play Gangnam Style direct from a smartphone at the DJ booth is another question entirely, of course – and just make sure your phone is in flight mode, too. We wouldn’t want any nasty surprises as the phone cuts out your audio so you can take a call from your mum…

• We don’t have pricing and availability information at this time.

Are you a mobile DJ who would like to be able to instantly stream the odd track from a Bluetooth device? Is this the way ou see things going genereally? Please share your thoughts in the comments! 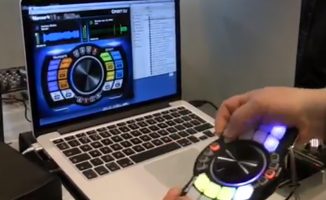