Yesterday, Apple waved its magic wand and introduced us to its take on wearable technology, the Apple Watch. Touted as the company’s “most personal device”, as far as I can see it can do two things quite well that may be of interest to DJs: Collate information about your body and yourself, and send pertinent data discreetly to you, sometimes without demanding you even look at it. (It also, apparently, tells the time, which is quite revolutionary: We’ve all been looking at our phones to do that for years! ;)).

So with these functions in mind, we thought it’d be fun to spend a little time thinking about how the Apple Watch can affect digital DJing. So after the keynote ended yesterday with an awkwardly charming skit from Apple’s Tim Cook and U2’s Bono, I scribbled down a few ways the Apple Watch may help us in our DJing:

While sync’s been around for a while now (and although it’s essential for more advanced form of live production such as in Traktor’s Remix Decks or DJing with Ableton Live) it still pays handsomely to know how to manually beatmatch.

The Apple Watch could give beginners a helping hand by acting as a BPM counter that offers different levels of vibration when two songs are out of sync (light vibration when it’s slightly out of sync, strong when it’s way off, etc). Not only would this be a great tool for learning the basics of beatmatching, but it doesn’t take beatmatching itself out of the equation. (Let’s not forget that, prior to sync, a lot of hardware mixers featured BPM counters on them, and that wasn’t seen as “cheating”.)

The Apple Watch, by introducing sensation through its “Taptic” Feedback feature, would not take your eyesight away from the crowd, helping to reduce screengazing. Fusing sensation with what you’re hearing would definitely help in demystifying beatmatching, making it not necessarily an “easier” affair, but a more manageable one for the beginner

One of my least favourite experiences while DJing is having to go to the restroom in the middle of a three-hour plus set – but when you’ve had a few drinks, sometimes you really have to go! In the past I’d look at how many minutes I had left on my CDJ, but there have been one or two occasions where I didn’t make it in time, thanks to a difficult crowd that I’d have to squeeze through! Nowadays, I just throw in a long song when applicable, but if you’re doing a Top 40 / pop set, there often really aren’t any long songs to buy you time.

A “Remaining Time” feature built into Traktor or Serato for Apple Watch would not only gives you the exact amount of time left before the song runs out, but could also calculate the distance and amount of time to and from the loo for you! Further, the app could also give you song recommendations as to what tracks to play next, in case you haven’t thought of that yet. You can then preview them from your Apple Watch and cue them, but personally I’d stop at letting it actually play the song for you – after all, that’s your job…

The Apple Watch comes with a gyroscope, and while movement-to-Midi has been around for a while (the Midi Fighter 3D, the Numark Orbit, etc), implementation is in its early stages and would definitely grow when paired with a mass-market device such as the Apple Watch. While there are obvious uses for this in your DJ software such as FX, filter sweeps, and EQ-related tweaks, the Apple Watch could also be used to control visuals and visual FX, both of which could be tightly tied to the DJ/performer onstage.

Imagine being able to affect the strobing or intensity/brightness of your visuals every time you put your hands up: That makes sense because you pump your hands to the beat anyway (if you’re that kind of DJ), so there’s an obvious correlation between the two. The Apple Watch could have an app that sends Midi data to DMX lights, so for example you can have a nice, cool blue hue when you have your hands on your decks at waist level, then brighter, more intense colours when you have your hands up.

4. Helping to read the crowd

The Apple Watch could potentially aid in reading the crowd, thanks to its built-in pulse sensor. While it wouldn’t tell you exactly what your crowd wants, it could potentially collect data for you based on other Apple Watches in the vicinity, giving you average pulse readings (ie is it a chill kind of night, or are people ready to get mental?), and even song recommendations to keep the mood going or to kick it a notch higher.

Apple’s keynote didn’t give a lot of information about the watch’s sensor, but it did offer that the watch could tell whether the wearer was actively moving or not. An app for DJs might give you crowd data, such as how many people are actually dancing, how many are seated, how many have come in and out of the club, etc. Of course, this wildly assumes that the Apple Watch becomes a universal device that everyone has on their wrist, but if Samsung and other Android smartwatch developers up their game too, a smartwatch on everyone’s wrist doesn’t sound so implausible, does it?

This could be one of the first uses of the Apple Watch for DJs. In the keynote, we saw Apple’s vice president sending a scribble on his Apple Watch to Jony Ive, Apple’s design lead. A DJ with an Apple Watch could receive these types of messages from other Apple Watch users, eliminating the pen and paper form of taking requests. As the night wears on and inhibitions lower, requests might come flooding in, so a “request screening” function of sorts might be built in to such an app.

Also, since the Apple Watch reads a user’s iTunes data (or maybe even Spotify plays), perhaps a DJ app could have a function that tallies users’ most played songs, and notify you of the most popular tracks per genre (eg Top 10 indie dance tracks)…

Of course, these are all just speculations based on Apple’s keynote presentation, but I don’t see any reason why we won’t have some form of smartwatch integration with digital DJing. While portable alternatives to laptop DJing, such as DJing on an iPhone or tablet, still have to gain widespread acceptance and use, the Apple Watch could buck this resistance by not trying to replace the laptop and controller, rather augmenting them. It wouldn’t compete with the future Traktor Kontrol S4s and Pioneer DDJ-SXs of the world, rather be an accessory in a class all its own. Hopefully, at least one of my points will become commonplace someday!

How do you think the Apple Watch may affect digital DJing when it comes out? Let us know your thoughts in the comments section below! 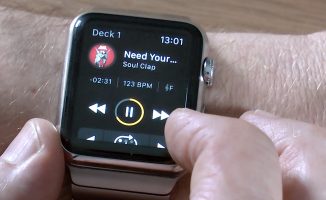 Video: DJing On An Apple Watch With djay 2.5