A few years in, iOS is showing signs of maturity as a portable DJing platform. While novelty apps and controllers were at the fore initially, we now have more full-featured programs aimed at casual DJs, as well as updates to existing programs that have turned them into viable performance-grade solutions. Here, we list the best apps to DJ with in our opinion among the current crop.

Pros: One of the first DJ apps for iOS gets an under-the-hood overhaul with drum pad / sampler features, a whole slew of purchasable effects, and hardware control thanks to the excellent Reloop Beatpad, among a growing list of other controllers. Spotify integration means you’ve got millions of songs ready to be dropped at a moment’s notice, provided you’ve got a 3G/4G or WiFi connection. Spotify Match service lets you discover other songs similar to the one you’re currently spinning.

Price: Free (with in-app purchases). US$4.99 gets you all the features, including essential ones like keylock, and hardware control with compatible Midi devices.

Pros: Sleek new interface gets it up there with the big boys (ie Traktor DJ and djay 2.0). SoundCloud integration is a unique feature not seen on other DJ apps
.
Cons: Full-screen ads that pop up every time you relaunch the program are a minor annoyance (these go away whenever you purchase anything from the in-app store). With licensing becoming more of an issue on SoundCloud, expect to find less popular tunes to stream. More compatible DJ controllers needed, unless Mixvibes plans to keep hardware control a minor feature

Pros: Excellent Traktor experience that’s a bit different from the PC / Mac version, playing on the strengths of the iPad / iPhone’s touchscreen instead of just being a direct port, such as the Freeze and Slice effects. Works perfectly with Native Instruments’ own Traktor Kontrol S2 mk2, Traktor Kontrol S4 mk2, and Traktor Kontrol Z1.

Cons: Traktor Pro 2 and Traktor DJ integration still absent despite being a touted feature just last year. No way to pitch bend on the app itself, so you’ll have to keep those beatgrids consistent if you want to mix clean, unless you’re using it with a Traktor Kontrol S2 / S4 mk2.

Price: Free (with in-app purchases). US$9.99 unlocks all features on all iOS devices

Pros: DJ Player has been around for quite some time, and with that longer lifespan in the iOS market comes experience and features that other developers are still playing “catch up” with, one of them notably being DVS integration with major timecode manufacturers. Its library sorting is unparalleled as of this stage, making it perfect for mobile DJs carrying a large library on their iPad. Mappable with any Midi controller that’s USB class compliant. It’s partnered up with Deezer, another popular streaming service akin to Pandora and Spotify.

Cons: It’s decidedly not one of the best-looking apps around, and since you’re doing your DJing on a touch surface, that matters a lot, as such we don’t recommend it for total beginners / casual DJs. The user interface can be a bit cramped at times, but this is easily the best incarnation of the app yet.

Pros: Aimed squarely at casual DJs and weekend warriors, its simple interface makes it friendly for first-timers, with a suite of effects that’s easy to use. Does away with some essential pro features like pitch faders, but in doing so positions itself as the non-DJ’s DJ app of choice for house parties and the like. Spotify integration sweetens the deal and lets multiple users DJ until the wee hours using only one iPad, even at the lowest storage configuration.

Cons: No manual beatmatching here, so you’re either going to use the Sync button or be especially deft at dropping cue points. Waveforms are low-resolution, so while you’re given a graphical representation of the song you’re playing, there’s no way to accurately determine transients / beats. No hardware control.

Which if any of these iOS DJ apps do you own? Which ones are you keen on trying out? Did we miss a favourite of yours? Let us know which one made the best impression on you in the comments below. 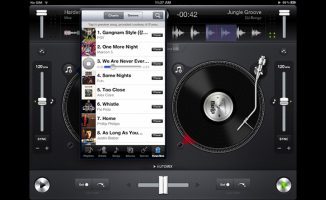