Pioneer DJ just announced the DDJ-1000 controller for Rekordbox DJ. It’s a portable four-channel device that has two full-size jogwheels with high-resolution displays built into their centres. Each display shows playback time, BPM, waveform, playback position and hot cue and loop points, plus you can customise these to see only the information that matters to you.

Each channel has a three-band EQ, a trim pot, and a Sound Color FX knob, and there are four Sound Color FX to choose from: Dub Echo, Pitch, Noise, and Filter. It also has 10 Beat FX taken from the flagship DJM-900NXS2 mixer, along with four brand new effects: Enigma Jet, Mobius Saw, Mobius Triangle and Low Cut Echo. There are 16 performance pads onboard with pad functions including Hot Cues, Sampler, Beat Jump and Pad FX, along with Keyboard mode which lets you pitch shift hot cues for melodic performance pad tone play.

The DDJ-1000 comes with a Rekordbox DJ licence, and it’s compatible with Rekordbox DVS, meaning you can connect your turntables or media players to spin with timecode vinyl / media. It also works as a standalone mixer, meaning you can run audio without a laptop: there are four pairs of switchable RCA phono / line inputs for hooking up turntables and DJ media players like CDJs or XDJs. You also get two microphone inputs, two USB jacks for hooking up two laptops, XLR and 1/4″ master outputs and 1/4″ booth outputs.

What’s different about it?

The DDJ-1000 is an interesting offering from Pioneer DJ because it’s the first DJ controller from the company that gets high-res jogwheel displays: up until now, the centre jogs have been pretty much the same as they’ve been for almost two decades (we pointed this out in a Gear Prophecy article a few months back). It seems that Pioneer DJ has revolutionised its jog displays, and it’s starting with this controller – perhaps to catch up with jogwheel screens from other companies including Numark and Denon DJ. Will we see them on more Pioneer DJ gear down the line?

The unit appears smaller than Pioneer DJ’s DDJ-RZ behemoth while retaining the four-channel mixer capabilities and jogwheel size and tension adjustments. It’s cheaper too, coming in at just under US$1200 – the DDJ-RZ in comparison costs US$2000. The more compact form factor means it would be easier to transport and set up the DDJ-1000 compared to the hulking DDJ-RZ.

Apart from the size difference, the biggest change on the DDJ-1000 compared to the previously mentioned controllers are the effects: You no longer get the FX sections at the top of each jogwheel. Instead, you get a Beat FX strip to the right of the mixer, which is closer to the effects section that you’d find on a Pioneer DJ DJM mixer at the club. The Loop In and Loop Out controls also appear on the upper left of each jogwheel, just like what you’d see on a CDJ or XDJ media player.

Those who spin with Pioneer gear at the club will be familiar with this CDJ / DJM layout, and those who want less friction when alternating between a controller at home and a CDJ / DJM set-up at the club will appreciate this. With NAMM 2018 right around the corner, we expect this to be on display at the Pioneer DJ so watch out for our review of it.

For now, check the promo video and photo gallery below.

What are your thoughts on this controller? Want to upgrade to it from your current device? Why or why not? Let us know below. 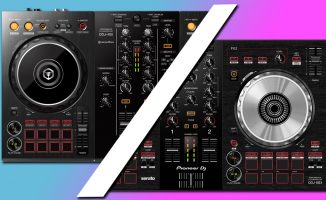