Andy Rigby-Jones is a man with a point to prove. “The Xone:DB4 in NOT an analogue mixer!” he repeat. “And it’s not a controller, either!”

So what exactly IS the £2000 4-channel monster that was released at the BPM DJ Show 2010 last weekend, where I met up with him?

“It’s our first fully digital DJ mixer, and easily the most technologically advanced DJ product we’ve ever made.” he says. Well, that’s that settled then.

I felt he’d said that a few times that weekend, as people gathered around the Allen & Heath stand right in the entrance to the show, where the mixer took pride of place at the centre of their set-up, being put through its paces by a multitude of DJs as the weekend race on.

How Allen & Heath got to here

I wanted to try and understand the Xone:DB4 better, and thought that to do so, it might help for Andy to tell us where Allen & Heath has come from. With a sparkle in his eye, he recounted how he started working at the small UK audio manufacturer back in 1992 when he was still a professional DJ (he gave up the good game in 2000). Back then the company was a manufacturer of pro touring mixers for live bands, and he was a junior test engineer.

“I moved into research & development, and in 1998 I suggested that Allen & Heath make a DJ mixer,” says Andy.

“As a manufacturer of pro touring equipment, there was initial reluctance as this was outside their core business, but that first mixer – called Clubwiz! – led to the Xone:62. Our big break as a DJ equipment manufacturer came when London’s Fabric club was an early adopter of the ’62.” says Andy.

“That gave us huge exposure to global DJs, and when techno legend Ritchie Hawtin endorsed us, we knew we’d arrived. That’s when the company began taking the DJ market seriously, and it’s all come from there.”

This live music background seems to be key. Live music desk need to be spot-on, and Allen & Heath’s reputation preceded them when they moved into DJ kit. Their skill at making big, heavy, tank-like products our of the best heavy duty components and with unbeatable sound quality meant that their DJ mixers firmly established thems right at the top of the DJ kit food chain.

So fast-forward to 2010 and the DB4. When Allen and Heath nickname their mixer “the dog’s bollocks”, you know they think it’s something special.

Unfortunately, early leaks gave out the wrong impression and blogs (this one included. Guilty, your honour…) speculated and hypothesised right up to the final leak of the full spec a couple of days before launch – which if anything, made DJs scratch their heads even more.

“People looked at its weight and said it was ugly, heavy and badly made!” says Andy. “It’s actually made of aircraft-grade aluminium, and is strong and light thanks to the development of new tooling processes by our mechanical design team and our metalwork supplier. People said the Xone:4D was too heavy, and we listened.”

But it’s not the weight, rather the fact that it is a mixer that seems to make a big deal of being packed with effects that has got many people confused. In these digital days where computer mixing means that laptops are taking care of effects and DJ mixers are often an after-thought, why on earth has Allen & Heath come up with a digital mixer packed to the gills with processing power?

Effects have to be special…

“We’ve always shied away from making an effects mixer,” says Andy, “because the effects always seemed a bit of an afterthought. I mean, many current effects mixers don’t have exactly have the best-sounding effects sections in the world.”

“This mixer is our shot at doing it properly. As we come from a live background, we can draw on our experience with iLive [their professional rack/control surface/firmware mixing and effects system for live bands – Ed] to do things with effects in the Xone:DB4 that other mixers don’t even come close to.”

“Well, it has 4 independent effects channels, each of which has its own beat detection and sampler. What’s more, you can route any input (USB, analogue, digital) to ANY or ALL of the channels. You could DJ with just one record deck or CDJ on this thing!

“With the touch of a button it is a Midi controller to map to your favourite DJ or production software, and with the amount of processing power we’ve put into it, it can simply do things that no laptop could ever come close to.”

“It’s also got a powerful sound card built in to save DJs doing anything more than plug their laptop in for 4-channel Ableton and Traktor DJing. Traktor certification is coming, and DVS support too, but it’s what you can do with just CDs or vinyl that really demonstrates what this mixer is capable of,” he says.

Tell us more about the effects.

“They all come from iLive, tailored for DJ relevancy by our DSP engineer, Rob Clark, ” says Andy. “they’re the best-sounding effects you can think of, and the really crucial thing is that the BPM engine ties the effects to the tracks so you can do awesome things with 4 tracks at once, easily. Or one track across four channels!”

“The days of mixing two tracks together are long gone. Today DJs demand more from their equipment. They want to produce on the fly, create new things as they go, and this mixer is unique in its ability to help DJs deliver that.”

OK, but it’s really confusing still, Andy. How quickly does the penny drop? How have other DJs reacted to it?

“They tend to agree that it makes sense once you’ve played with it. It’s definitely more than the sum of its parts. The truth is that until you use it, you don’t really understand how powerful it is.”

So do you think clubs will adopt the mixer?

“Yes, we’re sure of it. It’s really flexible. For instance, there’s a USB on the top, and it’s there so pro DJs can configure their DB4 at home, setting all the effects and so on exactly how they like them, and then simply plug a USB stick in when they arrive at the club to instantly configure the mixer to their own unique way of playing. ”

“The final twist is that the firmware is completely updatable, so this is only really the start of the DB4 story.” says Andy.

Is this the mixer that will change everything?

I was sold. The mixer looks a bit clumsy or cluttered in pictures, but in the flesh it’s well laid out, everything feels beautiful, and having on-board, hardware-driven looping and FX, plus those independent beat counters, and 4 separate samplers (up to 4 bars at 60BPM) puts a real creative tool in the hands of DJs who learn how to flex the thing’s muscles.

Not that I’m going to have £2000 to blow on a mixer any time soon, but if Allen & Heath wanted to supply Digital DJ Tips with one for, you know, product testing and feedback, we’d consider their offer sympathetically. 😀

On my way home from the show, I finally realised Andy’s point. Why should the DJ mixer miss out on all the fun? Today’s software and Midi decks – even CDJs – have all kinds of production tools built in, but the mixer has been a poor cousin to all of this.

Looks like a small Cornish live desk manufacturer that started 40 years ago and only reluctantly started experimenting with DJ mixers at Andy’s insistence just over a decade ago may well be about to change all that. 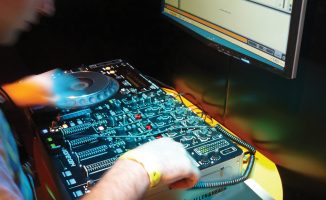 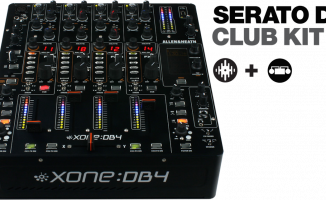 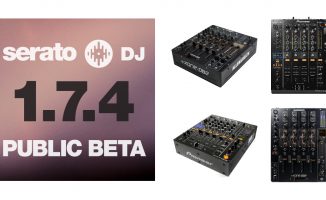 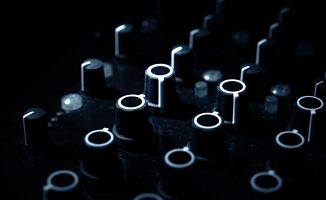