We’ve covered most of the key moments of NAMM 2012 in our articles and videos all week, but there’s always plenty of stuff (some of it significant) that we just couldn’t squeeze in. That’s the reason for this “best of the rest” post.

So from awesome future products all the way down to minor curiosities, here is our round-up of everything else that caught our eye as we traipsed around the halls, camera in one hand, bottle of water in the other…

An upgrade to the VMS4, this new model apparently corrects some of the shortcoming of that promising but built-to-a-budget model. It has a broadly similar spec, but we hope the audio interface has been improved and the thin, bendy fader poles are now sturdier.

This is a four-channel mixer that has full Midi too, so it can be used as a Midi controller for DJ software (it has transport controls). It has rather nice filters too. There’s a two channel version (12MXR) as well as a 19″ model. 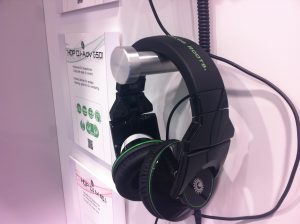 One of three new headphone models from Hercules launched at NAMM 2012, the other two being a consumer/DJ headphone (HDP DJ M 40.1) and a “Pro” phone (HDP DJ-Pro M1001). We didn’t get a chance to test them properly with the noise of the floor but are expecting review samples.

A small, plastic iPod/iPad mixer, that also functions as a “normal” analogue mixer. There is a mono-splitter function for DJing with two decks from one iOS device, and it is compatible with IK Multimedia’s own forthcoming iPad DJ software. We’ve asked for a review model and will give you a proper opinion as soon as we have it. 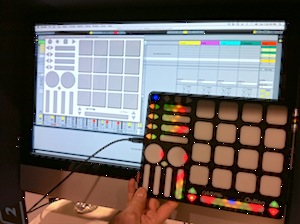 We hate the name but love the product. It’s iPad sized, well made in thin, slightly bendy plastic, with gorgeous multi-LED lit, multi-touch DJ-oriented rubber pads and controls. It comes with software so you can map it to any DJ software, upload the mapping to it, then it works exactly how you choose. Can’t wait to review it. 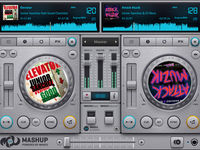 Do we need another DJ app for iPad? Waves Audio and Musicsoft seem to think so, with Mashup for iPad 2. To be fair, it has a reasonable feature list including independent time-stretch and key-shift, vinyl-style scratching (we’re taking their word, we haven’t tried it) and touch-ribbon filter.

A large backpack-style soft case made of heavy duty black nylon and with handles and a shoulder strap too. the lid is reinforced with hard plastic and there’s an extra layer of crate-like foam to protect your gear. It’s perfect for the N4, the NS6, the forthcoming 4Trak and other controllers of similar size. 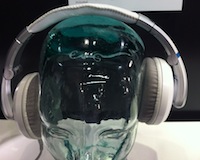 Looking a little similar to the Reloop RHP-20 high-end headphones, these lighter and cheaper ‘phones nonetheless have sturdy, stylish hinges between the headband and the earcups, and boast 50mm drivers for full sound. And they look quite cool too, if white is your thing.

We all know digital DJs tend to use their headphones less than analogue DJs, thanks to waveforms, sync and beatgridding. So a single-ear ‘phone that you can hold on one ear with your hand or shoulder is definitely an option for the digital DJ trying to make a different impression. It worked for Mark Moore from S’Express back in the early 90s. 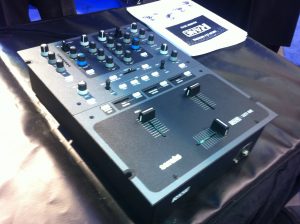 These new two-channel Serato Scratch Live mixers join the legendary Rane Sixty-Eight. The Sixty-One is the simpler, the two Sixty-Twos only having cosmetic differences (the Z is Z-Trip branded). A review of the Rane Sixty-One is coming son to Digital DJ Tips

We spotted these colourful controller covers on the VMS controllers by American Audio, but I’m sure if you were to check out their website they’d be models for all types. Nice way of jazzing up a dark grey box, I’d say.

This cute little case is hard so offers a greater degree of protection for your delicate little Native Instruments Audio 2 sound interface than a soft case would. There are more hard cases in this new range for other sound interfaces and other smaller DJ hardware too.

Same Typhoon hardware, now with Serato DJ Intro in the box and a new black look. This is a small, plastic consumer DJ controller but with great jogwheels and simple controls. If you never liked the red finish – well, now you’re in luck.

New firmware and a new mapping mean Golden devotees will lap it up. The print is very dark so you’ll not read it under club lights, but the blue touches are nice and the matt finish looks great… however if you want it to stay that way, don’t use the controller right after eating a bag of crisps!

And finally… who said rave and guitars don’t mix? This little fella certainly doesn’t have a problem with it. He’s too busy smiling and having fun to cause any problems. There’s a message for all of us. Tell me you didn’t smile too when you saw his cheeky little face.

What’s caught your eye? If you’ve been following our coverage all week, what has particularly stood out for you at this year’s NAMM? We’d love to hear your thoughts in the comments. 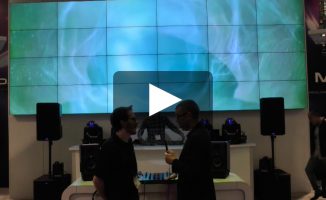