iRig Stream is a small audio interface designed to get audio into your iOS device, Android device or laptop, so you can record or stream that audio. For laptop DJs, it would be useful to plug in to their DJ controller in order to record their DJ set on a second device – for instance their phone or tablet.

And while any type of audio interface with at least a single stereo input would be able to do this job, there are things about the iRig Stream’s feature set that make it particularly suited to doing this for DJs, which we’ll cover in this review.

It’s a small, lightweight black box, with a pleasing rubberised coating, that fits easily into the palm of your hand. The unit has three small rubber strips that add as feet, so when it is on a surface it stays put.

On one end there are two RCA input sockets, and on the other end, a mini-DIN plug where you plug in one of the three supplied cables for plugging into a Lightning, USB-C or USB device – your phone, tablet or laptop basically.

On the top of the device there is a single, large input volume control. There are also three signal LEDs, that light to show you if your input signal is too low, OK, or too high.

The left-hand edge has a DC-in socket (adaptor not supplied), which means it is possible to also charge any attached battery-powered phone or tablet while the interface is connected to it should you wish (good for recording those super-long DJ sets). There are also Loopback and Mono off/on switches, which we’ll discuss in a short while.

The right-hand side of the unit has an 1/8″ TRRS mini-jack socket, that works like the mini-jack on a tablet or phone (for those phones that still have them, anyway), insofar as it can be used for a stereo audio out, and a mono audio in.

Think of this like when you plug wired phone headphones into a phone, the type that at have a mic built in to them (technically, these headphone/mic combos are called CTIA standard TRRS devices). In those situations you can listen to your device, but also talk should someone call you.

Technically you could plug just such a pair of headphones in here and both monitor the audio and add your voice to it.

More usefully for DJs, though, by adding a compatible adaptor (such as this one), you could plug a pair of stereo speakers or headphones in here, and have a completely separate mic input to speak over your music. The iRig Stream even has small, individual volume controls here for both input and output, which are super-useful to have.

Setting it up is a case of plugging it on to your chosen recording or streaming device with one of the supplied cables (that device will then also power it), plugging your music input into the L & R RCA ins, and selecting the iRig Stream as your input device on your phone, tablet or laptop system (or the software you’re using for streaming or recording) – it should work with any such app. 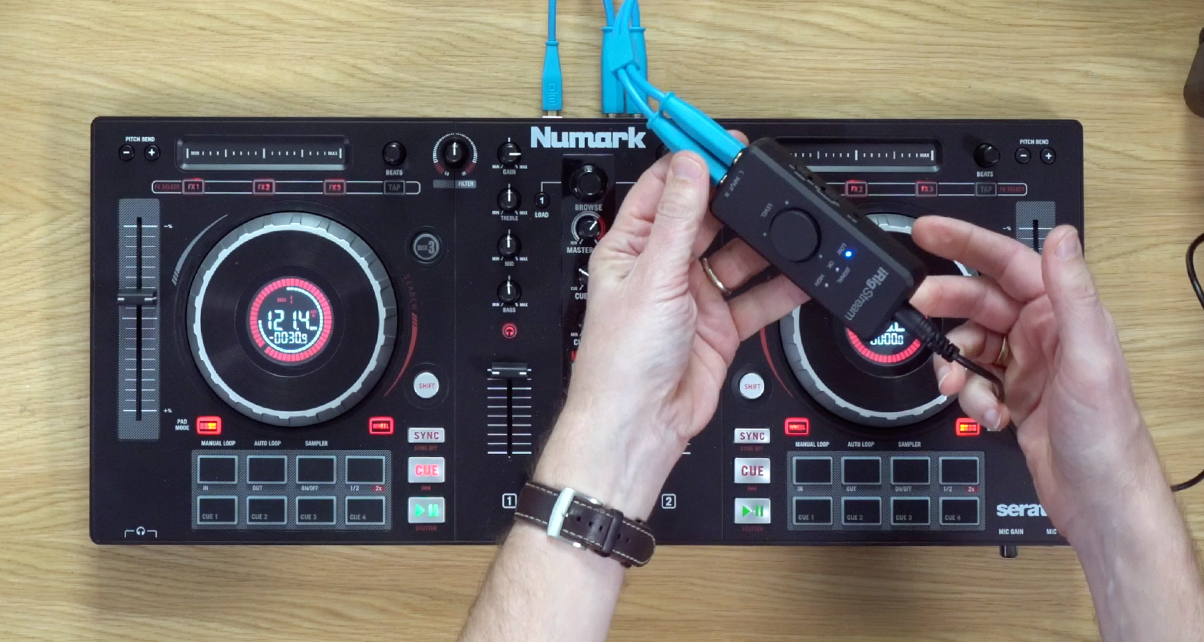 As I said at the start, the main use for this device for DJs would be for recording their DJ sets or recording music podcasts while mixing from their DJ gear, and it soon becomes clear that the iRig Stream’s feature set is ideally suited to this task.

While of course it is often enough to just hit “record” in your DJ software, sometimes you can’t do that (record is always disabled if you’re DJing from streaming services, for instance, or you may want to record crowd noise, or you may not even be using a laptop and software) – we go into more details abut why you may want an alternative way of recording in this article.

Why this is better than the alternatives

The thing is though that most audio interfaces of this type that offer inputs are designed for musicians, and so have a feature set that contains much that a DJ wouldn’t use – balanced inputs, XLR mic inputs and so on, and usually there are also more of these inputs than you’d need. For DJs, though, the input you want is simply a pair of RCAs, for a single stereo in – and they’re included here, so job done.

But it’s better than that. One of the issues with recording a DJ set from many controllers, especially cheaper controllers, is that it is not easy to both record and listen to your music at the same time. The reason for this is that there is often only a single “Master out” – and so if you plug this into your speakers (quite reasonably, so you and your audience can hear your performance), there is nowhere to plug in a recording device, as you’ve “used your outputs up”.

With the iRig Studio though, you can plug your speakers into the 1/8″ mini-jack socket for always-on direct monitoring, and because there is an audio out volume control just for that monitor output, effectively the iRig Studio is giving you the independent second output that is missing from your controller, making it possible to record your set on one “output” and listen to your music on the other.

We’re actually finding this useful at Digital DJ Tips for recording tutorials, demos and reviews with controllers of this type, and frankly we still use it with the bigger controllers and mixers , because on once it’s all set up, it’s just super-convenient.

How you’d set this workflow up

The workflow is simple: Set your DJ controller up, plug an RCA cable from its unbalanced Master Out out to the iRig Stream’s input, plug your monitor speakers into the 1/8″ minijack using a suitable cable, and start DJing. You then set the master output from your DJ controller to your normal level (nice and loud but not into the red, naturally), and the Phones Out volume in the iRig and your speakers’ own volume controls to get the level in your room or venue to where you want it to be – again, just as you would normally.

As far as the actual recording volume goes, the way it works is elegant and simple: The first “LOW” LED lights blue to tell you to turn things up a bit, the middle, green “OK” LED is where you want to be, and the red “HIGH” LED lights if you push things too far. In practice, it is simple to keep an eye on it and tweak as you go along, and if the audio is in the blue or the red momentarily, it is all pretty forgiving.

When you’re ready, you just hit “Record” (or “stream”) on your iOS or Android device in your app of choice, and you’re up and running. We actually use it with QuickTime on the studio Mac, but also on a computer you could just as easily record straight into Audacity (which is cross platform and free). IK Multimedia’s iRig Recorder 3 LE is included with the unit for iOS and Android.

For DJs wanting to record crowd noises or an MC, and for podcasters and radio show presenters who want to add a microphone to speak over the music, you can easily purchase a small adaptor cable separately as mentioned before that splits the 1/8″ TRRS mini-jack socket on the iRig Studio into a mono mic in and stereo out; you’d then plug your speakers into the stereo out, and your mic into the mic in.

The separate mic volume lets you get the mic’s level right, although you will want to “duck” the volume of the music when talking over it using your controller’s volume faders or master out; if your controller’s mic input already has ducking like this, using that mic input might prove to be the better solution here.

Note that if you’re a podcaster with multiple other sources, or have more complex audio requirements whatever the reason, there’s absolutely nothing stopping you plugging a mixer into this device, and plugging your controller, mics, decks or whatever into that mixer.

There’s a mono switch which outputs from the unit in mono instead of stereo should you be using an app that requires a mono input; this also effectively means you could plug two mono sources into the unit and have them mixed internally.

With the Loopback function turned on, the audio that is input to the iRig Stream from your recording device via USB is returned back to the host, and in this instance, the main Level knob will control the overall level that is recorded, adding more flexibility.

It’s surprising that a device like this hasn’t existed before. But as I said earlier, DJs wanting something to achieve this use case in the past have usually had to use a more expensive, more fully featured audio interface, with features and functions they don’t need – or indeed use an adaptor cable to “hack” their phone or iPad to accept a single, mono input to record that way. Neither solution is massively satisfactory.

The iRig Studio changes all that. With up to 24-bit, 48kHz sampling, the audio quality is great, and for us this is the first audio interface we’ve found that hits this sweet spot that we’ve been looking for for recording DJ sets, with the possibility of direct monitoring, recording crowd noises if we wish, and having simple yet effective control over the recording volume.

It’s a deceptively simple device, and one that we’d suggest should be a serious consideration for the DJ bag of anyone who has recording or streaming needs not fulfilled by their DJ software (or, of course, who DJs away from software altogether). At €99, it’s not a no-brainer cheap, but ii is reasonably priced for what you get – although we would like to have seen a small carrying case included for the price.

Overall, we loved this little interface, and the best praise we can give it is that we’ve adopted it and use it every to record performances right here at Digital DJ Tips. 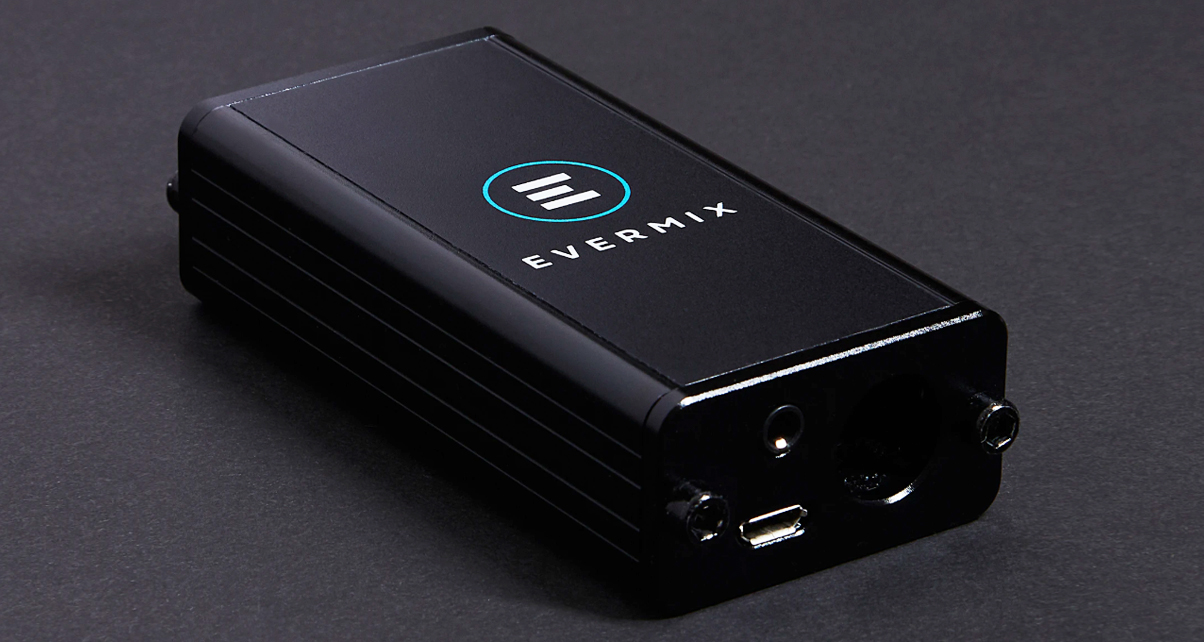 Perhaps the closest to it (and in this case, something aimed specifically at DJs) is Evermix’s Mixbox 4. This little metal-cased device is roughly the same size, has two RCA inputs, lets you charge your iOS device while DJing and recording, and lets you plug in a mic too; however, it doesn’t have onboard in/out and record level volume controls, or mono/stereo and loopback controls.

Instead, Evermix’s device is tied closely to Evermix’s own app for recording and sharing mixes, and is designed to make it all as simple as possible – managing your recording level for you, for instance. But as it doesn’t have the direct output that the iRig Stream has, it means you’ll need a dedicated second output from your DJ device just for recording, which is a big advantage of the iRig Stream for users of controllers that don’t have that.

In short, Mixbox 4 is aimed more at DJs who just want to plug in their phone and record and share their set DJing from pro gear and with Evermix’s app; the iRig Stream is is more a simple, minimal audio interface that concentrates on the recording side of things (it’s up to you what you do with those recordings), but that has many more features should you need them.