The Numark Party Mix is a two-channel DJ controller for Virtual DJ. It’s passable and could be fun for spinning in your dorm or house party, but it just doesn’t feel like a polished product: the jogwheel behvaiour is odd, the built in USB lead makes cable user replacement impossible, and the onboard lights just aren’t interesting enough. If you really want a controller with the most basic lighting onboard, the Numark Party Mix could make it on your shortlist, but only because it’s the only controller like it. 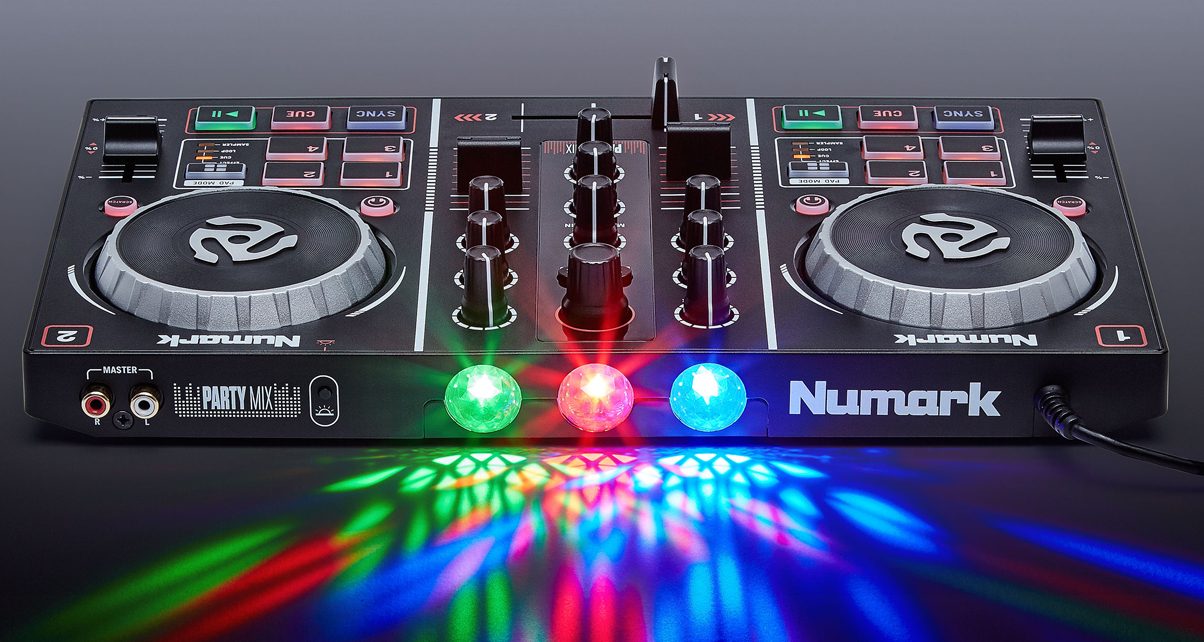 The Numark Party Mix is small and light – a 12.9″ iPad Pro feels big and hefty in comparison. It’s a two-channel controller, and each channel has a tiny jogwheel, a volume fader, two-band EQs (highs and lows) and a gain knob, four performance pad buttons with a pad mode selector (letting you switch among cue, loop, sampler, and effect modes), sync and transport controls, headphone cue button, a short throw pitch fader, and a Scratch on/off button (similar to the “Vinyl” button on CDJs).

It also has a Browse button for going through your Virtual DJ library, track load buttons, a Master output knob, headphone mix and volume knobs, and a crossfader.

In the back of the unit is a pair of RCA Master outputs, a button for choosing from among the four LED light modes (more on them later on), the three LED RGB lights, and a USB cable that’s attached to the unit. I amm not a fan of the built-in cable: if it breaks, you won’t be able to replace it yourself.

The Numark Party Mix ships with Virtual DJ LE, which is the “intro” version of Virtual DJ 8. 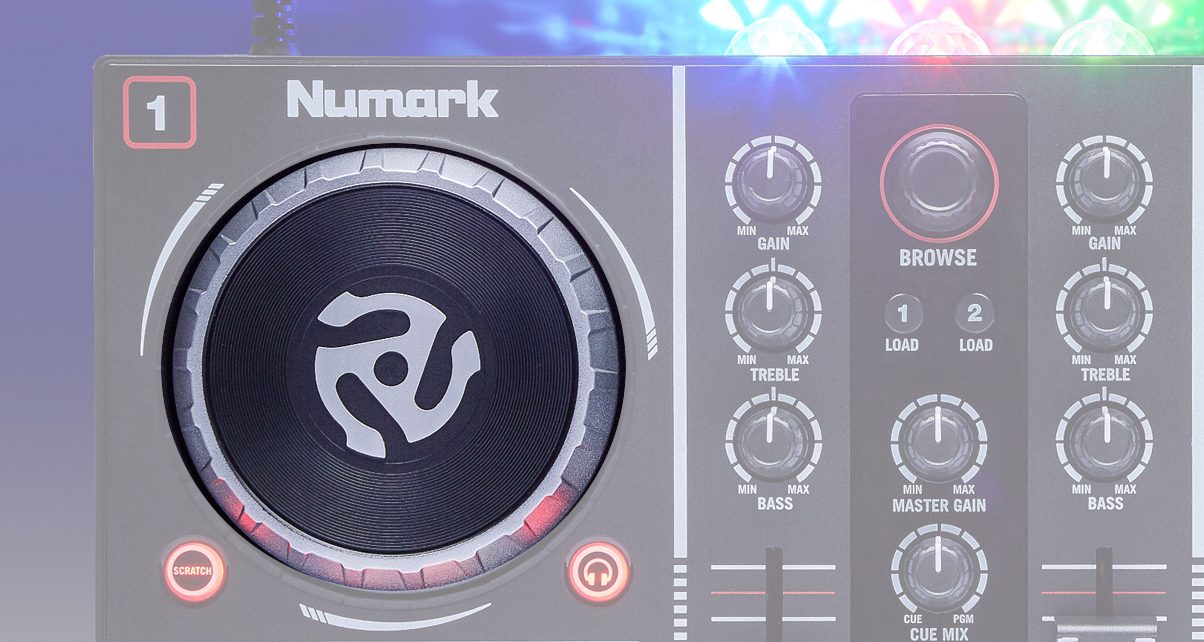 The jogs on the Numark Party Mix are tiny and far from the best-feeling ones out there, though you can’t expect much in the sub-US$100 price range. Having said that, they are usable.

There is an annoying niggle – whenever you let go of the jogwheel, it takes almost one second before Virtual DJ resumes playback. Even if you “push” the jog forward, this doesn’t help shorten the playback gap.

Even stranger: track playback will resume automatically after you’re done moving the jogwheel forwards or backwards, even though you haven’t let go of the jogwheel yet. It’s disconcerting to say the least, because as DJs we’re used to having the track “stop” when we’ve got our hands on the jog. 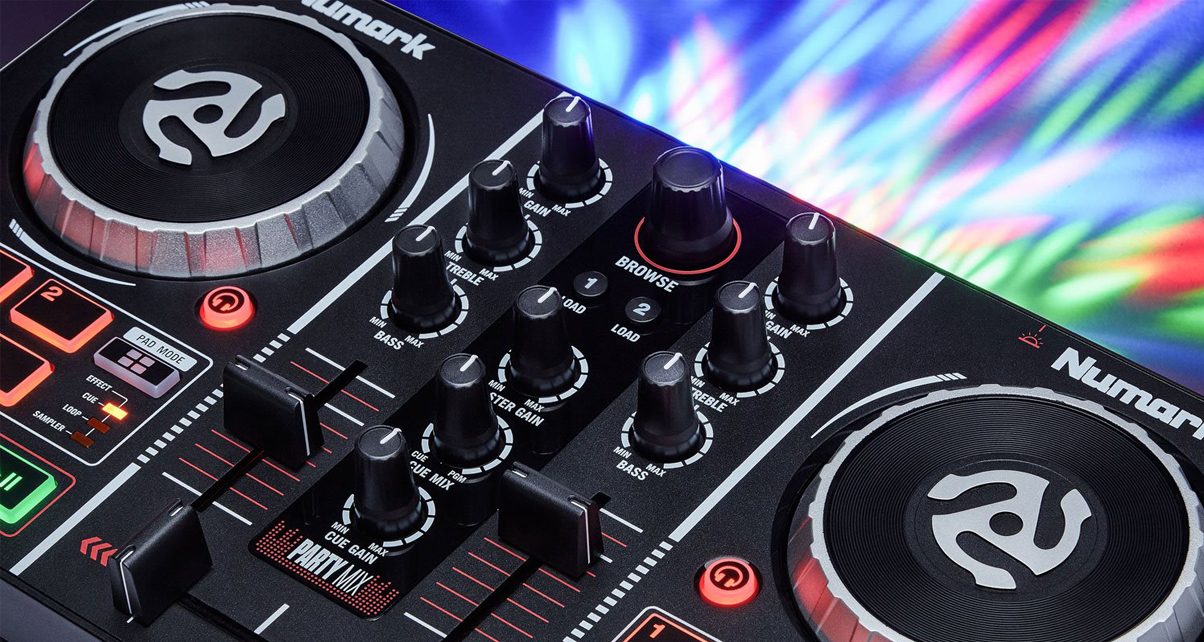 The onboard mixer has knobs for gain, high, and low – you won’t find any filter knobs here. The volume faders are plasticky but weighted, and while the crossfader is looser, it isn’t buttery smooth. Again, that’s to be expected in this DJ gear bracket.

The Browse and load knobs work as expected, along with the headphone cue, volume, and Master output knobs. 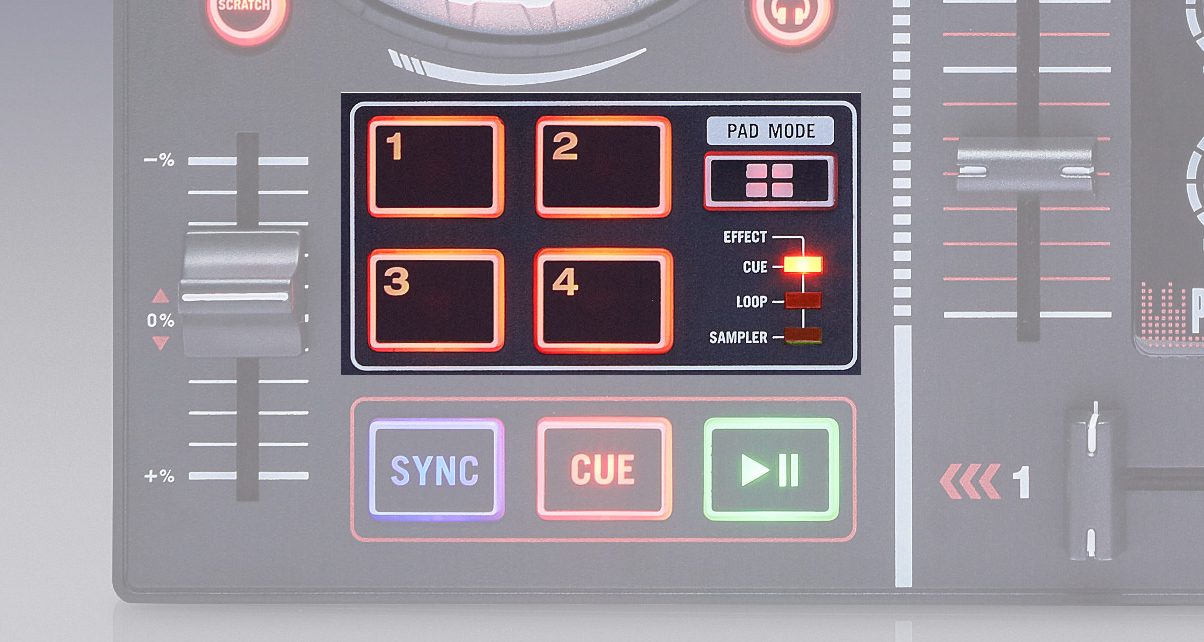 The Numark Party Mix has four performance buttons per deck – these aren’t velocity sensitive pads, they’re more like stiff on/off switches. You can select among four different modes: cue for hot cues, loop for setting loop points, sampler for triggering samples in Virtual DJ, and effect for toggling the effects in Virtual DJ on or off. 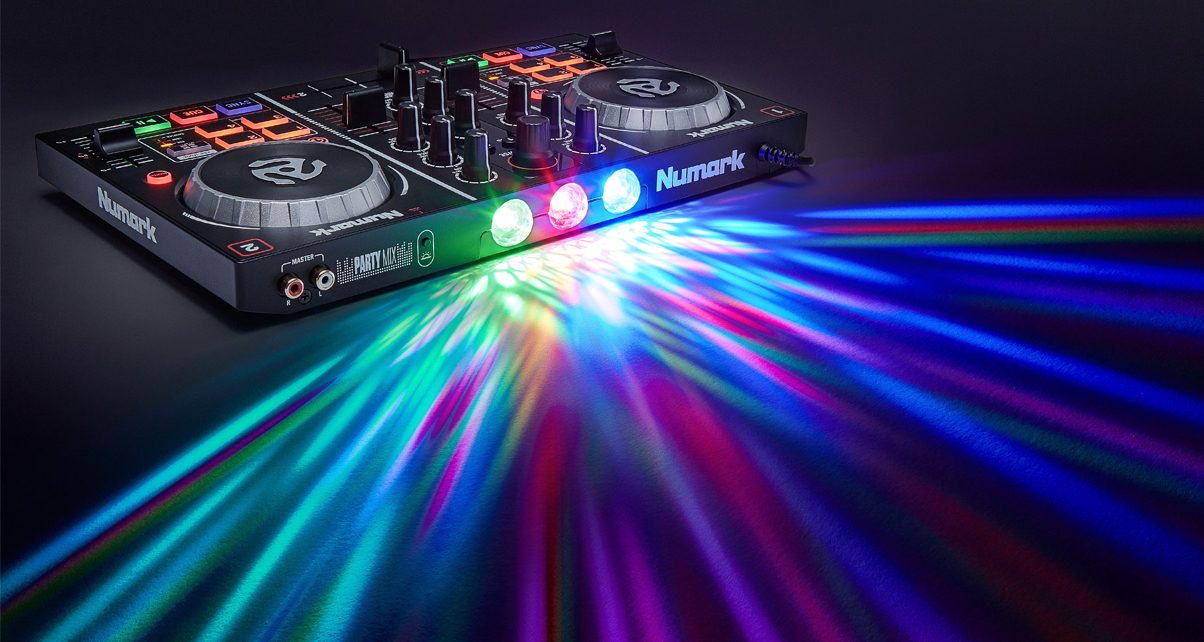 Arguably the biggest selling point of the Numark Party Mix is the built in lights. They consist of three LED bulbs (red, green, and blue) housed at the rear of the unit. Since they’re in the back, that will mean that the lights will always face either of two subjects: your crowd (if you’re playing out), or your bedroom wall. More flexibility for positioning the lights would be a nice touch, as there is no way to move them without moving the entire unit.

There are four lighting programmes that are baked into the Party Mix, all selectable using a button at the back of the unit: the first flashes each of the three lights one by one, the second flashes the lights one by one and then in combination, the third creates a different variation of lighting combinations, and the fourth turns all three lights on. The first three programmes flash in time with whatever music you’ve got playing through the Master output. You can also opt to turn them all off.

The Numark Party Mix is passable and could be fun for spinning in your dorm or house party, but it just doesn’t feel like a polished product: the jogwheel behaviour is odd, the built-in USB lead makes user cable replacement impossible, and the built in lights aren’t interesting enough.

The addition of onboard lighting is a cool idea on paper, but the lack of variety makes this a missed opportunity. The Numark Party Mix promo material you see online are bolstered by additional lighting that isn’t seen on camera, which is a bit misleading.

If you really want a controller with the most basic lighting onboard, the Numark Party Mix could be on your shortlist. However, there are other better controllers in this price range: the Korg Kaoss DJ is a solid touch-based option, and the upcoming Numark DJ2GO2 looks interesting.