The DDJ-SX3 is Pioneer DJ’s latest four-channel controller for Serato DJ Pro. It’s more evolution than revolution, and it packs even more power into the DDJ-SX form factor including three microphone inputs, dual USB ports, standalone Sound Color FX and key shifting controls. The only thing we would’ve wanted to have seen on it would be onboard displays for the jogwheels. Regardless, it’s the definitive four-channel Pioneer DJ controller for the current Serato DJ Pro feature set.

It’s been six years since the introduction of the original DDJ-SX controller which changed the game for digital DJing. It was considered massive at the time – smaller controllers like the Vestax VCI-300 and the Traktor Kontrol S4 reigned supreme back then when portability and form were prized over power. Those tradeoffs (as well as the general newness of digital DJing) led to controllers being labelled as “toys”.

The DDJ-SX shifted the DJ controller paradigm by being big, full-featured and professional. Club and pro DJs now had a serious bit of kit they can take to gigs, and mobile jocks had a reliable unit that included the inputs and outputs they needed to run shows.

Fast forward to today: DJ controllers are more powerful than they’ve ever been, even eclipsing kit found in DJ booths, and they’ve got a lot bigger as well (see the DDJ-RZX and Numark NS7III). This is the landscape where Pioneer DJ released its latest controller: the DDJ-SX3 is the third iteration of the DDJ-SX, and it retains most of what DJs love about it while throwing a few curveballs in.

It’s now got three microphone inputs along with built-in Sound Color FX, which is something you’d find on Pioneer DJ DJM mixers or flagship DJ controllers like the DDJ-SZ2. The mixer section gets a new, grey finish and the Sampler Volume control is a knob now instead of a fader. The crossfader is no longer replaceable.

Around the back are XLR and RCA Master outputs, 1/4″ Booth outputs, four pairs of RCA line inputs with two of them being switchable phono inputs, one combo TRS mic input, one XLR mic input, dual USB jacks for connecting up to two laptops, a power jack and a power switch.

The front of the unit has 1/4″ and 1/8″ headphone jacks, a headphone volume knob, headphone mix knob, crossfader curve adjustment switch, and a 1/4″ mic input with a level control and on/off switch.

The DDJ-SX3 comes with Serato DJ Pro, and a bunch of expansions: Serato Pitch ‘n Time DJ and Serato Flip are included. It’s also Serato DVS ready, meaning you can use it with turntables and timecode vinyl when you purchase the Serato DVS upgrade. 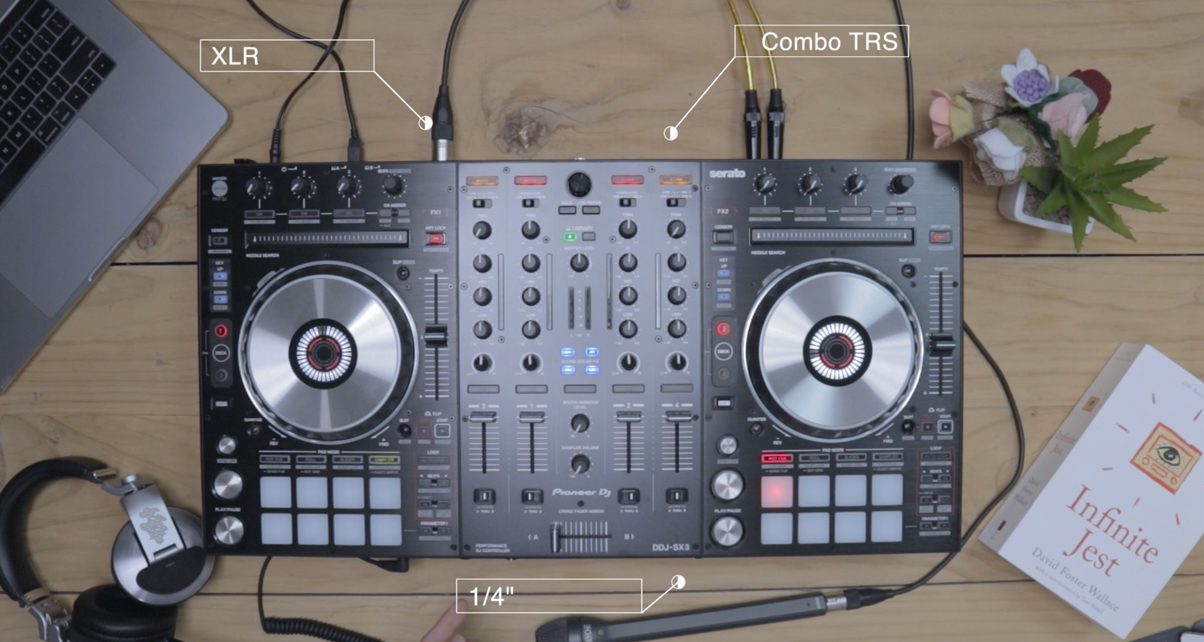 The biggest new feature on the DDJ-SX3 are its microphone inputs. Pioneer DJ has added a total of three mic jacks here: a combo TRS input and an XLR input in the back of the unit, plus a 1/4″ jack for the front. The first two mic inputs can be routed into channels 3 and 4 on the mixer, allowing you to tweak EQ and apply Sound Color FX to them.

It’s unlikely that you’ll be using all three microphone inputs simultaneously, though mobile DJs will enjoy the flexibility they give.

There are Sound Color FX baked into the unit. These are usually found on Pioneer DJ DJM mixers as well as more expensive DDJ controllers, but four of them finally make an appearance in the DDJ-SX series: Echo, Jet, Noise and Filter. They work and sound as expected, and have the added bonus of being able to be used standalone, so you can effect any audio signal going through the four channels. 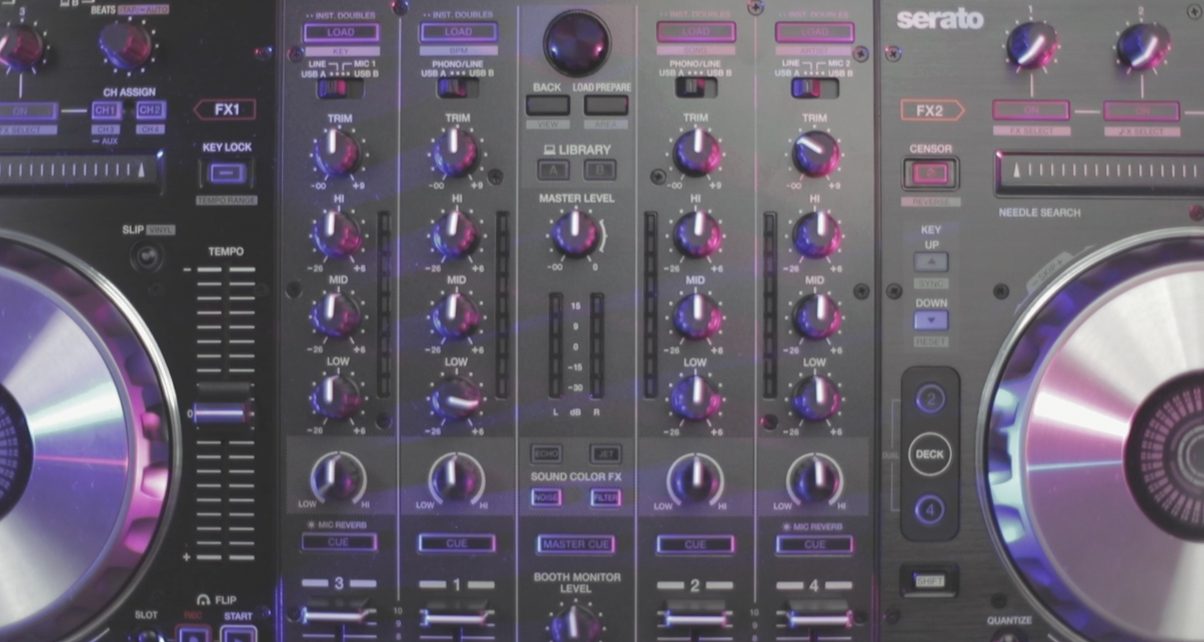 The DDJ-SX3 comes with a standalone four-channel mixer, meaning you can use it to route audio (whether line, phono or microphone signals) even without a laptop connected. The Sound Color FX also work standalone.

Each of the four mixer channels now has an input switching matrix, allowing you to access either of the two USB ports (for DJ switchovers / B2B sets), phono / line inputs for channels one and two, and mic inputs 1 and 2 for channels three and four. This is as comprehensive as it gets for a DJ controller of this size. 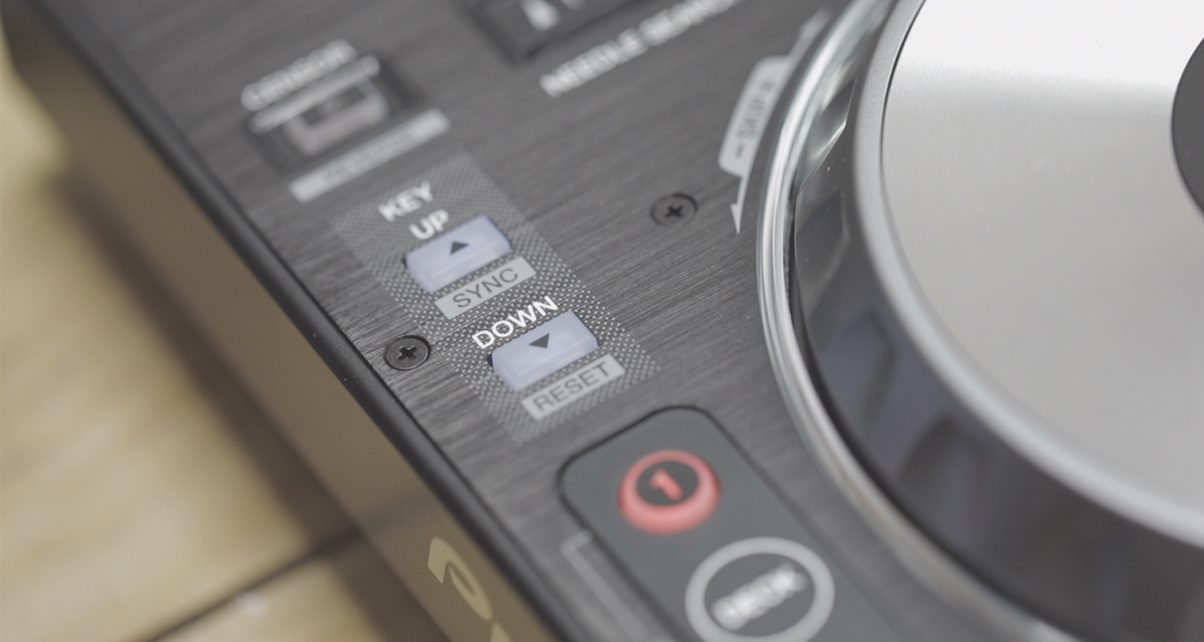 While the DDJ-SX3 looks almost identical to the DDJ-SX2 before it, there are a few subtle differences: the Sampler Volume is now a knob instead of a volume fader (presumably to make room for the Sound Color FX). The Headphone Mix knob has also been relocated to the front of the unit, beside the Headphone Volume and headphone output jacks.

Another change is in the Key shifting controls which have replaced the Grid Adjust and Slide buttons on both decks. This means that Pioneer DJ (and Serato by extension) wants to place an emphasis on performance-based harmonic mixing as opposed to grid tweaking, which can still be done albeit using the computer’s keyboard and mouse. This is also evident in the ability to access Pitch Play in the performance pads, which wasn’t available yet when the DDJ-SX2 was introduced.

If you’re in the market for a new four-channel controller that brings the best and newest features of Serato DJ Pro at your fingertips while giving you the input and output connectivity required for the most demanding of performances and professional gigs, the DDJ-SX3 has got you covered.

If you’re an existing DDJ-SX2 owner, you may not find much new on here to warrant plumping down a grand, though owners of older or less powerful Pioneer DJ controllers like the DDJ-SB and DDJ-SR who want to trade up to something beefier will be pleased to know that a fantastic controller has been made even better in the DDJ-SX3.

Folk online have been pining for a Serato DJ Pro version of the DDJ-1000 controller, which has two full-size jogwheels and screens onboard. The DDJ-SX3 is not that, and there isn’t any news as to whether or not a DDJ-1000 for Serato DJ Pro will be released, if ever. For now, if screens and full-size jogwheels are of paramount importance to you, you’ll have to switch to Rekordbox DJ (or at least Virtual DJ 8, which is already compatible with the controller).

It wouldn’t have hurt to have updated the jogwheels displays on the DDJ-SX3, though. Even something as simple as those found on the Numark NS6II or the Mixtrack Platinum may spur even DDJ-SX2 owners to trade up.

Despite this, the DDJ-SX3 remains to be a high-quality controller that’s got enough going for it to entice Serato DJ Pro users. While some may bemoan the lack of game changing innovation, the DDJ-SX3 is simply Pioneer DJ polishing a well-crafted feature set and fine tuning it to near-perfection. Highly recommended for those who looking for a new Serato DJ Pro controller.