The DDJ-XP1 is a grid pad controller for Rekordbox DJ. It takes full advantage of the new 16 hot cue limit in Rekordbox DJ, giving you the maximum amount of pad real estate possible when using the new Keyboard pitch play feature. If you spin with Rekordbox DJ (whether with a controller or turntables via Rekordbox DVS) and would like more control over cue points and effects, the DDJ-XP1 could be on your shortlist. 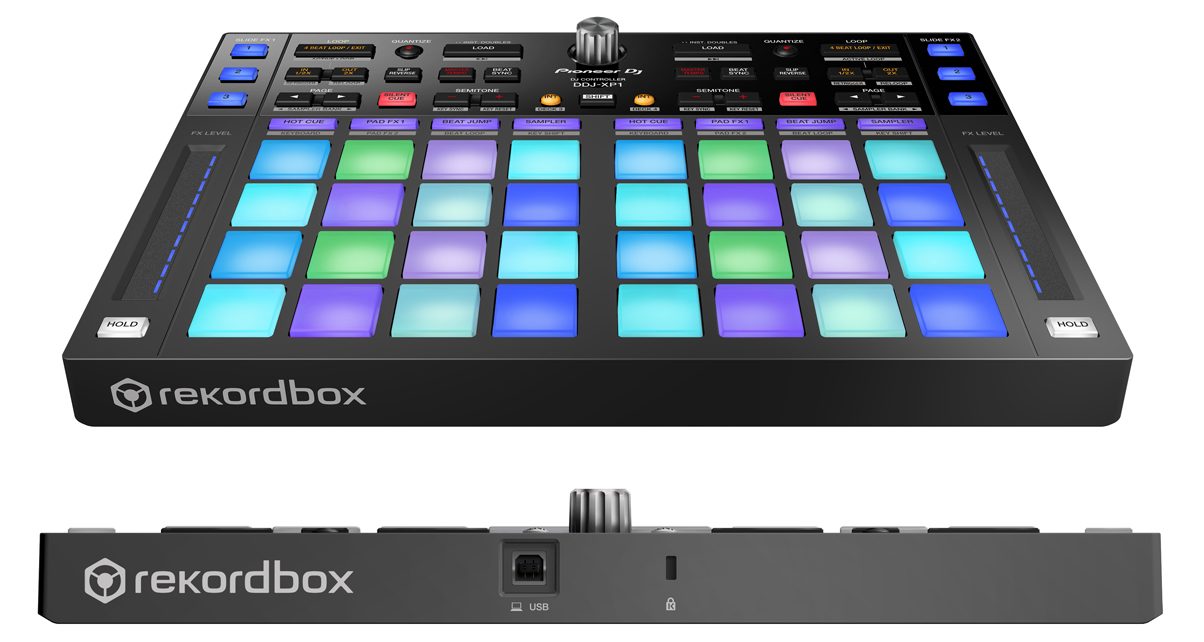 The DDJ-XP1 is made of plastic all around, which is standard for almost all Pioneer DJ controllers and media players. It’s light, but doesn’t feel cheap or flimsy – I can imagine this being used and abused on the road and in busy DJ booths. Just don’t stamp or spill an entire pint on it.

On the face of the unit are 32 pads, 16 for each of the two decks (Deck 1 and Deck 2 are mirrors of each other in terms of layout). There are also browse, loop, deck load buttons, and Sampler Bank select buttons. Flanking the DDJ-XP1 are the new Slide FX sections, which consist of three Slide FX selector buttons and a touchstrip.

Round the back of the unit is a USB jack and a Kensington lock. The DDJ-XP1 is USB bus-powered, so no need to plug in a power lead, making it more portable and easier to hook up in the DJ booth.

The DDJ-XP1 ships with licences for Rekordbox DJ and Rekordbox DVS, which means you can spin with timecode media straight out the box. Rekordbox DVS timecode vinyl is a separate purchase though, and can be bought from the Pioneer DJ online store.

I plugged in the DDJ-XP1 to my laptop alongside my DDJ-RZ and got to work. 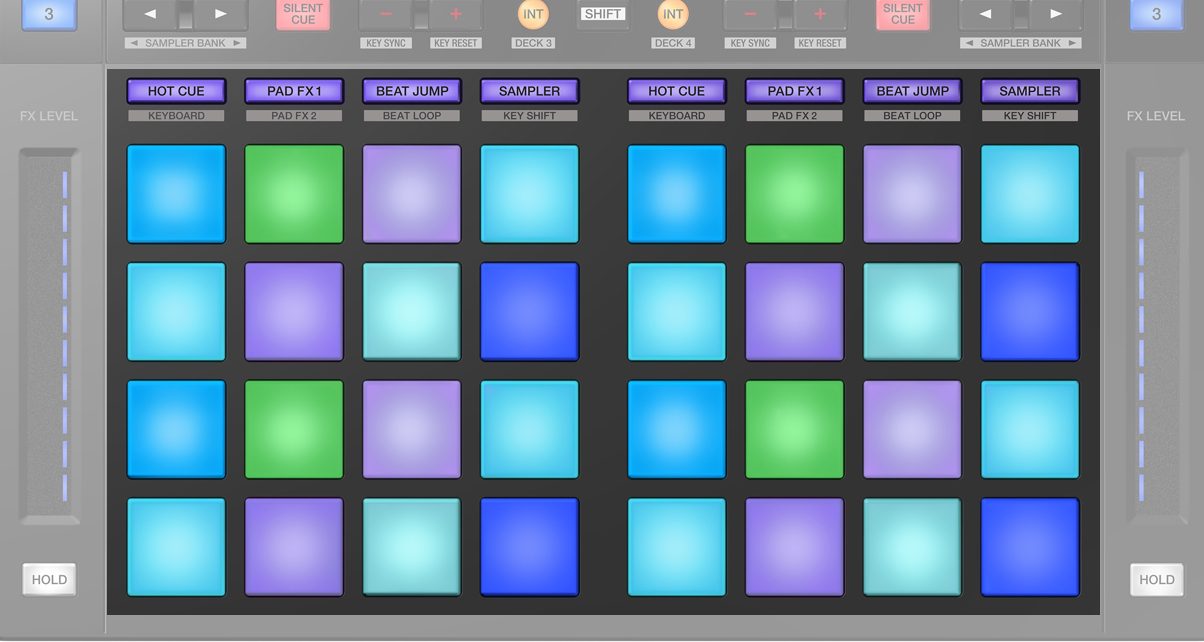 These are some of the best-feeling pads that Pioneer DJ has produced: they’re stiff and chunky, making them ready to be abused by even the most brutal of finger drumming / cue point juggling routines. They’re responsive and sensitive, but not overly so, unlike the DJM-S9 (though you can adjust the pad sensitivity setting on the mixer).

You can change the colours of the pads in Rekordbox DJ, letting you colour code them for visual reference during a performance or routine.

Hot Cue lets you add or trigger hot cues (holding Shift while pressing a pad deletes a hot cue); Pad FX lets you trigger a pad effect that you’ve specified in Rekordbox DJ; Beat Jump lets you move along a track in rhythmic increments; Sampler lays out the Rekordbox DJ Sampler banks onto the pads for you to trigger; Keyboard lets you access the new hot cue key shift mode in Rekordbox DJ 5 (more on that later); Beat Loop lets you set a loop in varying lengths; and Key Shift lets you use the pads to shift the musical key of a currently playing song up or down.

Browse / load buttons and other controls 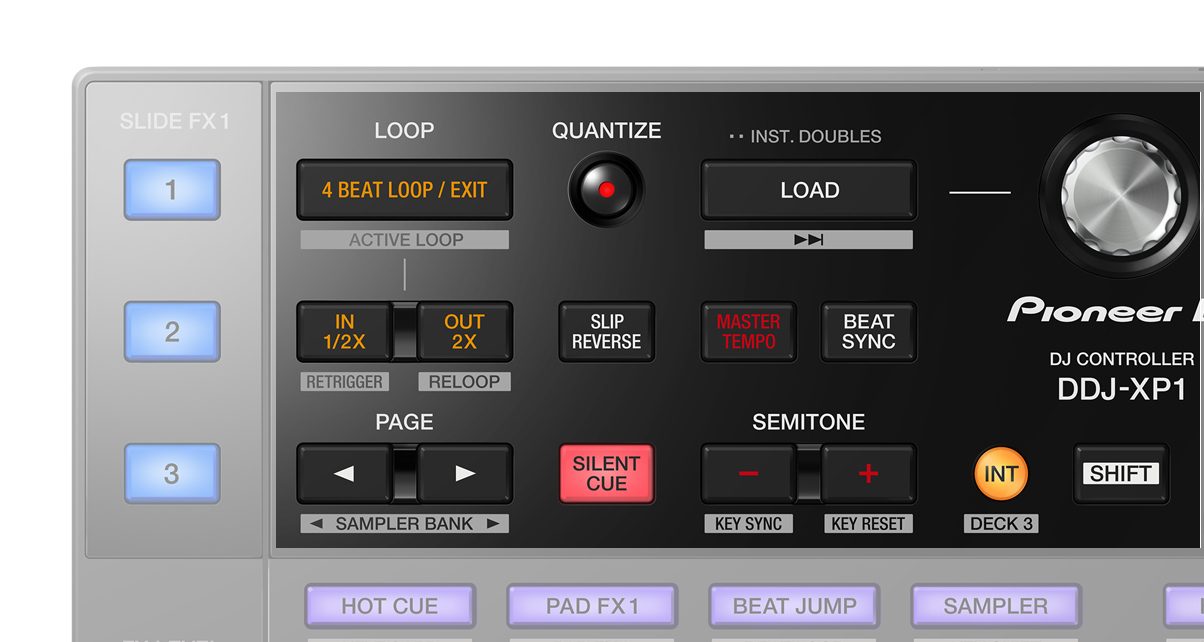 The DDJ-XP1 has a browse knob onboard for scanning through your library, and it also has deck load buttons. While you may not find much use for them if you’re already using a DJ controller, DVS users will appreciate their inclusion. Two Semitone buttons let you shift the musical key of a track up or down by a half step. Slip Reverse plays the track backwards for as long as you’re holding it down, and it snaps back to the ongoing playhead position when you let go of it.

Looping controls consist of a “4 Beat Loop” on/off button, manual Loop In and Loop Out buttons (which also double as loop length increase and decrease buttons).

Silent Cue is a feature that makes a track instantly play back at its normal speed, letting you avoid the “starting up” time of a turntable platter altogether when you’re spinning with DVS.

Other controls include Quantize, “Int” buttons for switching to Internal Mode if you’re using DVS (great if something happens to your turntable or media player), Master Tempo, Beat Sync, and Sampler Bank page select buttons. There are also deck select buttons for accessing Decks 3 and 4. 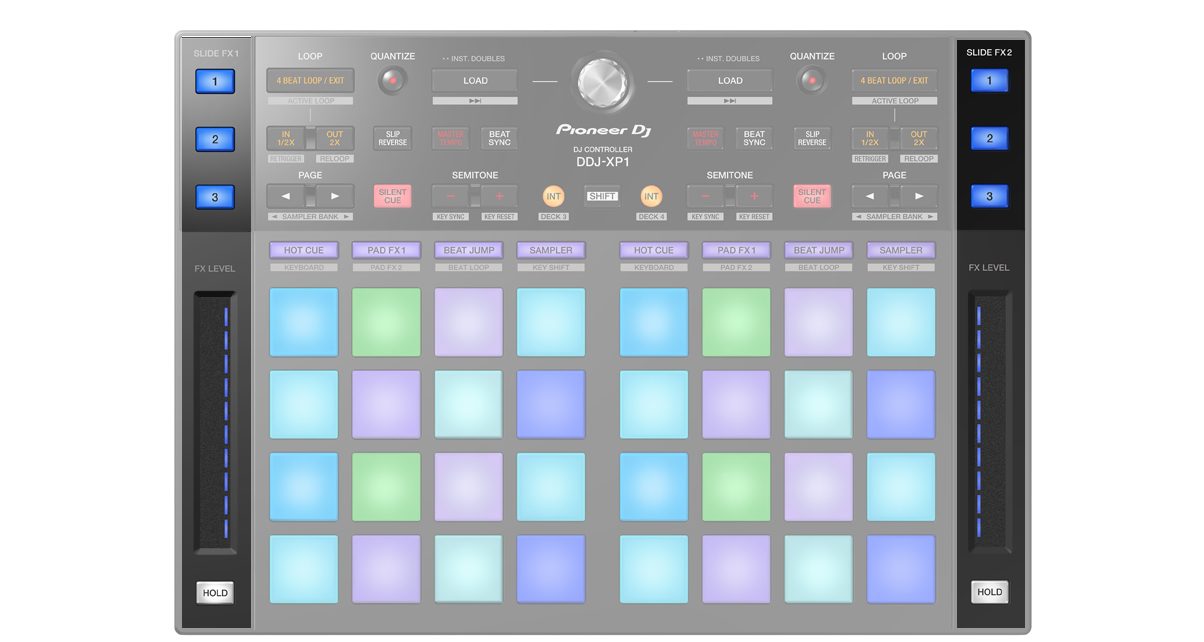 The DDJ-XP1 comes with an exclusive new effects feature known as Slide FX. You have three Slide FX buttons that you can assign an effect to (you can choose from among 17 effects), and you can turn them on by pressing any of the three buttons. You then slide a finger across the FX Level touchstrip, which results in some cool filtered effects that are useful for routines or creating artificial buildups in a track.

Slide FX alone makes a strong case for the DDJ-XP1: you can’t activate these effects without plugging the controller in, and to be fair these aren’t throwaway / obscure effects that are ill-thought-out. I found them quite usable for my style of Top 40 / chart DJing, making it easy to do effects-drenched transitions between songs of wide BPM differences on-the-fly. 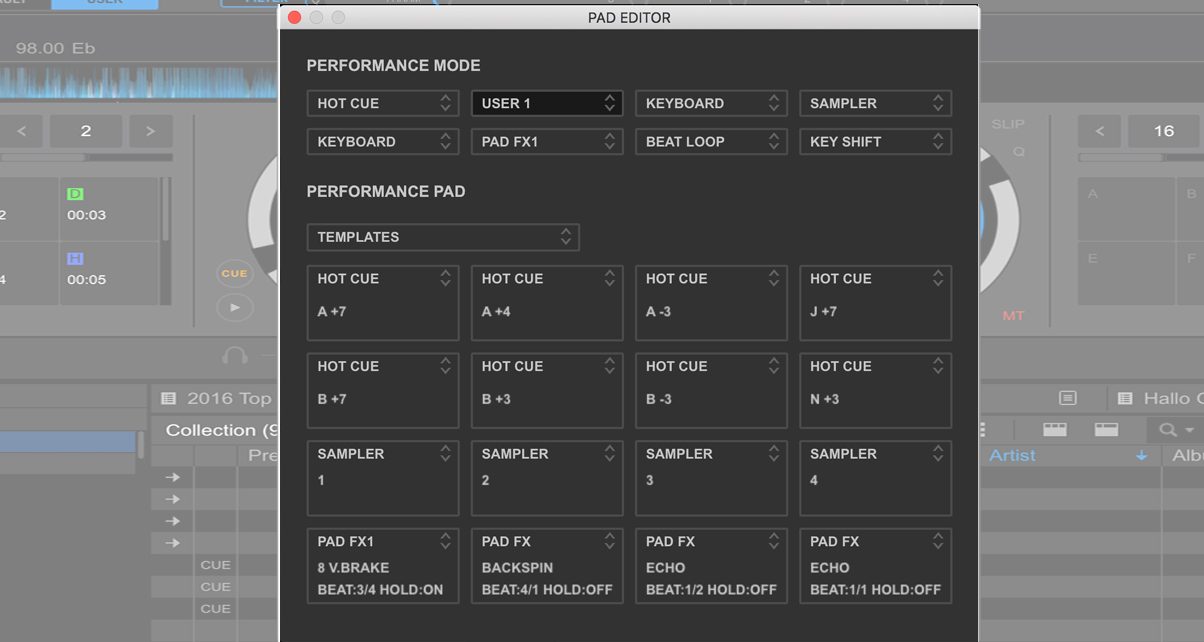 While the DDJ-XP1’s layout is intuitive, you’ll want to customise it according to your preference if you want to do any real pad play routines on it. For example, if you want to do a pitch play routine using several different cue points, you don’t want to have to switch from Hot Cue mode to Keyboard mode for each pad press.

The Pad Editor in Rekordbox DJ 5.0 is enabled only when the DDJ-XP1 is connected, and this is where you can get in deep with the way the grid pad functions. You can change the arrangement of the pad mode buttons themselves (say you want Keyboard mode to be right beside Hot Cue mode), but more importantly, you can assign specific functions to each of the pads. In one of my user-defined modes, I set the top half of pads as hot cue triggers with different pitch shift assignments, while the bottom half has a row for triggering Sampler buttons and a row for Pad FX.

Arranging pads this way lets you assign commands in a layout that is convenient and makes sense for you while you perform. 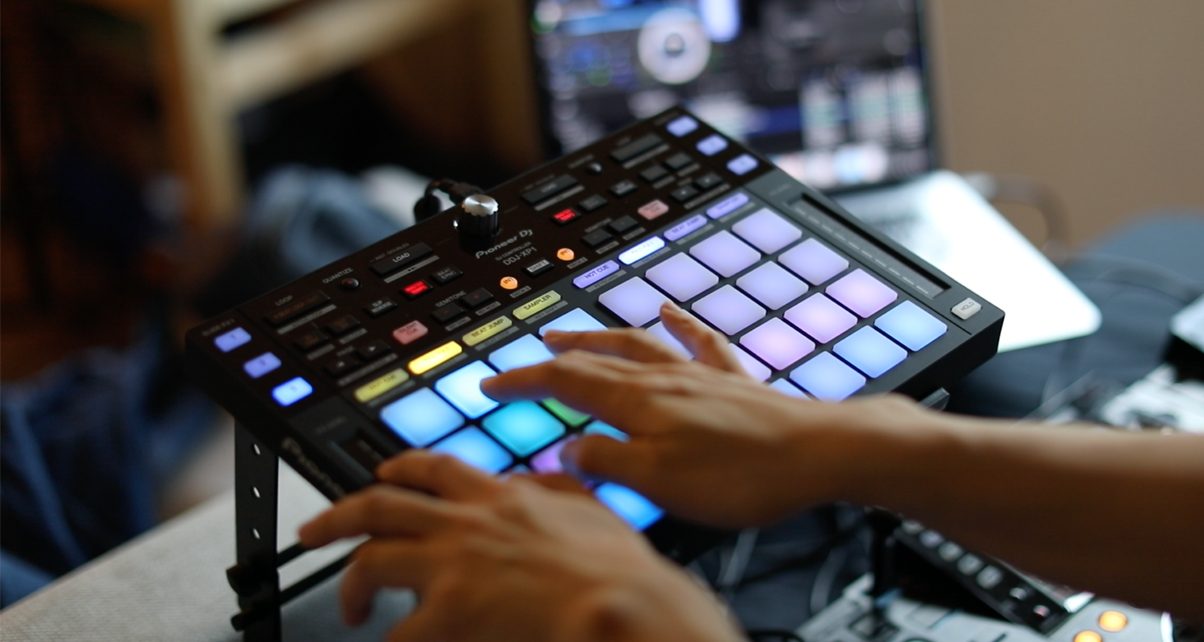 Keyboard mode is a new feature in Rekordbox DJ 5. It lets you pitch up or pitch down a hot cue in varying degrees for melodic cue juggling and pitch play. When you press Keyboard mode, the 16 pads divide into two: the top half is for pitching up a hot cue, while the bottom half is for pitching it down. You select which hot cue you want to use with Keyboard mode by selecting it in a virtual deck dropdown in Rekordbox DJ – you can also just assign a specific hot cue and pitch value by using Pad Editor.

Key Shift lets you change the musical key of an entire song. This is used in harmonic mixing for when you want to blend two songs of different keys and you want to match them, or even if you just want to change the key of a song as you play it. You can also hit the Key Sync button, which syncs the musical key of a track with what’s currently playing. 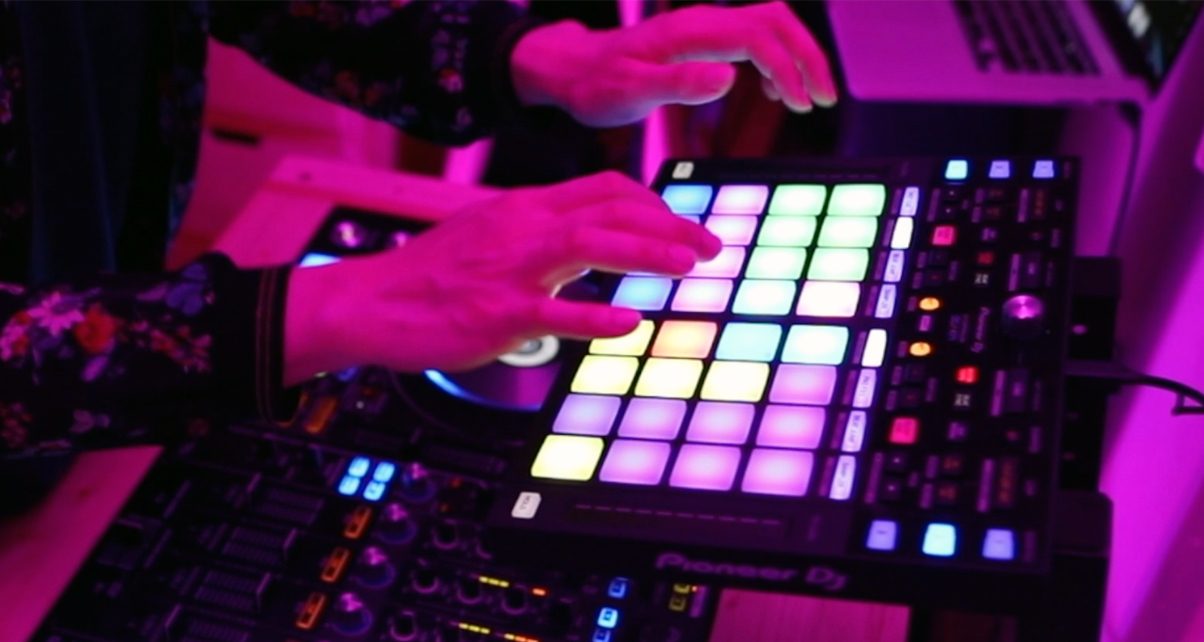 The Pioneer DJ DDJ-XP1 is a cool accessory for controllerists and scratch / battle DJs who want to take their Rekordbox DJ performances and routines to the next level: the pads feel great and work as they should, the layout is thoughtful, and the Slide FX are useful. It’s not an essential device for all DJs though – casual DJs may find the amount of controls overwhelming, and mobile / pro DJs may find the features to be unnecessary for the work that they do.

DJs who spin via Rekordbox DVS will find the greatest use with the DDJ-XP1: a DVS set-up (whether with turntables or DJ media players) usually has fewer controls compared to a full-spec’d DJ controller, and as such scratch DJs and club DJs spinning with Rekordbox DJ and a laptop will benefit the most from the DDJ-XP1’s plethora of buttons, pads and touchstrips.

The DDJ-XP1 works best when connected to a laptop running Rekordbox DJ 5.0. Like the DDJ-SP1, you can use the DDJ-XP1 with a networked set of CDJ-2000NXS2s for DJing with a USB thumb drive, although the feature set is limited: you can control up to eight hot cues, set loops and do Beat Jumps, but that’s it. That’s a shame, because I can imagine DJs would love to have the expansive 16 hot cues of the DDJ-XP1 plus all the other bells and whistles like the Slide FX. Perhaps a future firmware update to the CDJ-2000NXS2 (or a CDJ-3000NXS?) would allow for this.

DJs who spin with Rekordbox DJ will also find that they’ve already got at least some of the controls available on the DDJ-XP1: if you’ve got a capable device like the DDJ-RR, half of the DDJ-XP1’s pads will be redundant, at least as far as hot cues are concerned. If you pair the DDJ-XP1 with larger devices like the DDJ-RZ, you then begin to realise that it really isn’t necessary unless you are focused on creating and performing cue juggle and pitch play routines and if you must have the Slide FX in your DJing arsenal.

As such, the DDJ-XP1 is a high-quality, though decidedly niche, product for performance and battle DJs. If you’re that kind of DJ, then the DDJ-XP1 should be on your shortlist.