The Hercules brand practically had the game to itself at the bottom end of the digital DJing market until recently, but with these four models from big names like Numark, Vestax and American Audio, the bottom-end of the market just got congested. Don’t expect professional build quality or top-end components here, but coming from named manufacturers, also don’t expect rubbish – these controllers carry many of the features of their grown-up brothers, but at a fraction of the price. Read on…

The compact, good-looking little Numark Mixtrack comes bundled with Traktor LE software, the cut-down version of the highly regarded Traktor Pro program. It is simple and cheap, but has all the controls you’d expect. A bit toy-like, it is nonetheless better laid out than the bottom-end Hercules controllers, and is undeniably good value for money. No built-in sound card though, so you’ll have to factor in buying a budget DJ card too. (Full Numark Mixtrack review here.)

Good if: You’re looking for value for money
Bad if: You can’t find, or don’t already have, a cheap-but-good-enough sound card

Inheriting the unique touch-sensitive jogwheels from the VCI-100 and 300, the attractive and portable Vestax Spin comes with a novel take on DJ software – a program called djay, which integrates perfectly with iTunes. With its built-in sound card and microphone input, and the simplicity of having full access to your iTunes playlists and folders to do your DJing from, plus some pretty good DJ effects, it’s a truly neat way of getting into digital DJing without a lot of the usual fuss. Note, it’s only for Mac. (Full Vestax Spin review here.)

Laden with buttons, inputs and outputs including a booth/master split, four channels that are switchable between analogue and digital, two microphone inputs, loads of Midi-assignable controls, and enough extras to keep you mapping functions for weeks, the American Audio VMS4 is a feature-laden controller and the most expensive among our four. It looks good too, with a reasonable build quality, and comes with the competent Virtual DJ 6 LE software and a built-in (average) sound card. (Full American Audio VMS4 Review here).

Good if: You’re a geek looking for value.
Bad if: You want to just plug ‘n’ play.

Like the Spin, the Vestax Typhoon is a younger sibling of the acclaimed Vestax VCI series, and gets those classic jogwheels too. Compact and good-looking, it is stripped down (also like the Spin), but still manages to pack some simple DJ effects, a built-in sound card and a microphone input. Like the American Audio VMS4, it uses Traktor LE, a perfectly usable stripped-down version of the popular DJ package in use by many professional digital DJs. (Full Vestax Typhoon review here.)

Good if: You want a bargain all-in-one Traktor LE solution
Bad if: You have a Windows AMD machine – it won’t work on it.

If you want to just “blend” music at parties and aren’t 100% serious about beatmixing etc (and don’t think you ever will be), the Vestax Spin looks great fun, and is the easiest of all of these to use too. The Numark Mixtrack would be great if it had a built in sound card, but even at its cheap price point is crippled without one to my eyes. Of the two Traktor controllers, if you think you’ll be plugging in to all sorts of soundsystems and using decks and CDs too, go for the American Audio, but if not, the Typhoon is a great portable choice that you probably won’t outgrow for a couple of years at least.

What do you think? Are there any new controllers you’ve seen that you think should have been included? Have you just bought a controller you think is as good as any of the above? Let us know below. 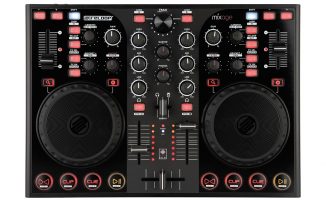