I was talking to a bright, clued-up 29-year-old female wedding planner this weekend about the types of DJs her company books for its clients. She was telling me about a wedding where the couple are spending over $1000 a head – just on the food! High class stuff. She started telling me about one particular DJ they book. She said something along the lines of: “Our clients are rich, but they demand value for money. They want really good DJs. This guy we use is not cheap, but he does it properly – you know, without a laptop or anything like that…”

Of course, that sentence stopped me in my tracks.

You know, in a way it doesn’t matter if we know that what we’re doing on our controllers and laptops takes a lot of skill. It doesn’t matter if we’ve come to digital DJing from vinyl or CD DJing, and just appreciate the convenience of doing it this way. It doesn’t matter if we can fill dancefloors and do a great job. None of that matters in the eyes of influential potential clients and the general public if at least some of them perceive that there are two ways to DJ: With computers, or properly.

Another story. I remember DJing with a Vestax VCI-300 a few years ago. It’s a wonderful controller; simple, well built, almost purist in its approach to DJing. It’s also quite small. And like most controllers, it has bright lights on it. And I remember somebody coming up to me (totally admiringly, I have to say), and saying: “Wow, I love your DJing toy!”

Then, just like this weekend, that sentence stopped me in my tracks.

It’s funny, because when digital vinyl systems (DVS) appeared on the scene, nobody really cared about the fact that there was a MacBook perched in the DJ booth too as the DJ spun from timecode vinyl. It seems to be the combination of DJ controller and laptop that causes the “not real DJing” / “toy” thoughts to form in people’s minds.

Pioneer, of course (probably not surprisingly, as the company has a vested interest in keeping DJs spinning in pro booths on its expensive CDJs) has always pushed a slightly different model: Use your laptop to help you prepare your DJ sets with rekordbox, and then use USB sticks with your prepared music on them to actually do your DJing from, on “traditional” DJ gear.

Just recently, DJ controllers have begun to appear with discrete, built-in screens (maybe not coincidentally looking similar to those found on CDJs), so you don’t have to keep your computer screen high and visible. Out of the first two of this “new breed” of DJ controllers (the Traktor Kontrol S8 and the Numark NV), the Traktor Kontrol S8 in particular looks like it means business, size-wise: It’s a big control surface, crucially free of jogwheels (ie “shrunk-down turntables”), and I don’t think you’d ever be accused of playing with a toy when DJing from it.

Come to think of it, I never got the “toy” reaction when DJing with the Novation Twitch, either, which although small, again looked like it was some kind of esoteric, hard-to-understand “control surface” rather than a “DJ toy”. (If you’re not aware of it, it was one of the first controllers that tried to “ditch the jogs”.)

Maybe the real reason people think computer DJing set-ups are “toys” is that DJ controllers nearly all look basically like flashy, plasticky versions of real DJ gear, little boxes with cute spinny things that you just add a laptop to and hey! now you can “play” at being a DJ. Maybe it’s the slightly kitsch “tiny decks and tiny mixer” feel that gives that impression.

Of course, it’s all unfair: You can DJ with the same skills and flair on a Numark Mixtrack Pro II as you can on a full five grand Pioneer set-up. I for one adore all types of controller DJing… but I’m starting to see how in a way, Pioneer (with its “keep the computer at home” approach to pro DJ gear) and Traktor (with its new “ditch the jogs and while you’re at it, hide the laptop” angle) may just have a point. To some people, a small box with cute little jogwheels on it, and a laptop right there in front of the DJ, is always going to look like just playing at it.

I guess the truth is that if you really want to make a full go at DJing – to be in with a chance of landing the big gigs, earning the big bucks – you damned well better learn the skills properly (so you can use any gear, including the Pioneer-style stuff that still dominates pro DJ booths). Alternatively, you definitely need to learn something genuinely new and exciting (the Traktor Kontrol S8 route, for instance, Remix Decks and all). Otherwise – as you set up your two-jogs-and-a-mixer DJ controller and unfold your laptop – it appears that you still run a risk of people thinking that you’re just playing at it.

What do you think? Do you find the general public and even clients demanding you do more than use a controller and laptop at your sets? Do you think the alternative approaches out there, whether CDJs and rekordbox (Pioneer) or big controller plus Remix Decks minus jogs (Traktor) are the future? Please share your thoughts below. 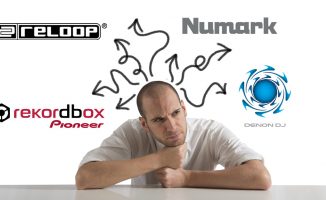 Your Questions: What's The Best Controller For Beginners?