In part one of this three-part mini-series, What Exactly Is A DJ/Producer?, we looked at what a DJ/producer actually does. Then in part two, Why Become A DJ/Producer?, we talked in a frank and honest way about why you may want to be a producer.

Assuming you read both of the above and are still dead set on becoming a “DJ/producer” rather than simply being a “DJ”, today’s final part give you five steps to getting your first work out there – be that a mashup, a re-edit, a remix or even your own production – and then building on that to finally achieve success as a DJ/producer…

Now we say five “proven” steps, but of course doing it is not going to be in any way easy. But we hope that this way you’ll be able to put your efforts in where they count, knowing that the steps themselves have been tried and tested by those before you…

Our five steps to production success

1. Get some basic musical stuff nailed
The big one here is harmonic mixing. It is important to understand how musical keys work and how major and minor scales are related but different. Otherwise, you’re relying totally on your ears to decide if things work together or not, and thus you’re limiting your ability to place elements together that shouldn’t work together but somehow do (or to confidently spot the opposite).

Learning to play an instrument is not massively important, but being comfortable with how to use a keyboard can help. If you already play any instrument, that knowledge can inform your production skills, so even if it’s the recorder, don’t discount it…

Luckily, as a DJ, you have a definite advantage over someone who reckons they’re musical and decides they want to be a producer, because you’re used to thinking about what will go well with something else – as DJs it’s what we do every time we pull a new tune out of the bag to go with the current one, every time we DJ, after all.

This is a skill, just as much as musical knowledge is a skill, and it’s something you can practise and get better at. So try the most outlandish things – applied alongside the musical theory you learned in step one, you’re well on the way to creating something new from your tunes, loops, stems or virtual instruments.

3. Pick a weapon, any weapon
Even more so that with DJing, getting gear or software “paralysis” is a rabbit hole you really don’t want to go down when it comes to producing. The truth is that you can make a hit on practically any software that has a record button, and that incudes that free version of Virtual DJ you have there on your computer. If you have Traktor 2.5 or above, you have “remix decks” which are a little like the way another program you may consider, Ableton Live, works. Ideal stuff.

Want simple production software? Many DJs have produced global hits using nothing more than FL Studio (formerly “FruityLoops”), which is really easy to get going on – try the demo from their website. Look at Reaper, another amazing digital audio workstation with a generously long free trial. Or just grab a copy of Mixed In Key’s Mashup, the simplest of the lot, to test the waters.

Point is, you probably already have something you can start on, and if not, you can choose something today. Once you’ve got it, stop looking for anything better. Don’t worry about your gear or your software – worry about making your first production instead.

4. Do the work!
Here’s where the rubber hits the road. It’s the scariest part of this, but also the most exhilarating. To get “in the zone”, commit the time and make sure you spend it, come what may. Turn up and do it. Dreamers dream. Doers do.

If you decide on four hours a day for a week to produce your first track, then turn up at 10am and work till 2pm however you feel, for that week. It’s important you grasp that the end result is secondary to turning up – because it’s the discipline that will get you success.

Inspiration, being “in the zone”, making something that turns out to be worthwhile – that’s all in the stars. It’s beyond your control. But I can tell you for sure that those stars will align in your favour when you get the discipline bit right.

5. Get it out there
Here’s a simple formula. It’s only one formula, but I’ve seen it work again and again:

Got all that? Now do it again and again!

One thing’s for sure: What I just told you won’t get you success instantly. So here’s the final piece to the jigsaw: Do it again. And again. That’s why the “discipline” part is so important. It may take two, three, five years. But unless you choose to stop doing this, it’s not a question of if, but when. Blind faith is a prerequisite here.

What happens when it happens…
In the end, you’ll have 50 videos on YouTube, a following of a few thousand on Facebook, a load of stuff for sale (that nobody buys) in online stores, and then – bam! Something you do hits gold. Suddenly, people are buying not only your new tunes, but all your back catalogue. Suddenly, you’re making a bit of money. Suddenly, you’re getting a few DJ bookings out of town. And suddenly, everything you dreamed of may just start to come true.

Of course, your success has been anything but overnight, but only you know the exact formula that got you here. And the best bit? You’ve earned it. You’re now good enough. You’re now a successful DJ/producer.

Good luck, and do remember to enjoy the journey; in the end, that’s really what it’s all about.

• As a bonus, we have an in-depth article appearing on Monday by Digital DJ Tips writer and DJ/producer Chris Cartledge (see below), looking at five mistakes rookie producers always make, which is essential reading for anyone deciding on trying their hand at production.

If you’re serious about getting started in production from a DJing perspective, we’ve got what we think is the best-kept secret in production training for you.

DJ/producer and Digital DJ Tips writer Chris Cartledge spent over six months creating OD Total Music Production, a fantastic beginner production online video course, similar to our acclaimed How To Digital DJ Fast course. At 12 hours long it covers all you need to know to get started in music production. It even has links to free software so you won’t need to spend a penny extra to get going. Here’s a video with more info:

If you like the look of the course, head over to OD Total Music Production for more info and to buy. This is the first production course we’ve ever recommended, and as a Digital DJ Tips writer and a friend, I can personally vouch for Chris’s expertise, enthusiasm and level of service – he will be there to help you personally as you take your first steps in production.

Have we inspired you to have a go at making your own material, of any type? Have you already been doing this? How’s it working for you? I’d love you to share your thoughts and experiences in the comments. 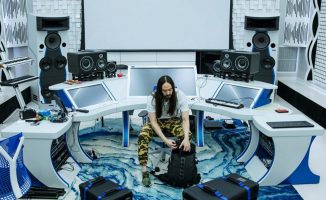