DJ controllers are growing up at a rate of knots, and the V7 from Numark will have many a digital DJ drooling once they realise what Numark has done here. Niche, it may be. But if you’re in that niche? You’re probably going to want one…

I am sure most of you are aware of the Numark NS7, which is the daddy of all 100% digital Midi controllers. Designed to work in tight integration with Serato ITCH software, it lets digital DJs play like vinyl purists, featuring as it does two high-torque, spinning platters, topped with real vinyl. So is the V7 just an NS7 deck, sawn off? Not quite, as we’ll see…

I guess our first question should be: Why the V7 (and its sister mixer, the X5) at all, when the NS7 is so good? Well, the NS7 is undeniably a winner. But for some, it isn’t quite 100% there. Let’s cast aside the use of Serato ITCH for a second (you either love or hate ITCH, and if you don’t like it, these products won’t seriously interest you anyway). The thing is, the NS7 doesn’t quite hit the grade for some not because of its quality (which is excellent), but, variously, because:

So, there could be a market for a modular version of the NS7, of which the V7 is set up to be the “deck” part. Let’s look closer…

A V7 is basically a 100% digital (ie no CD player involved) performance deck. Mixer built-in? No. Sound card? Yes. You plug it into your computer with Serato ITCH running and plug the output from the deck into a mixer, and there you have it: one channel of digital sound.

Plug another one in to another mixer channel (linking the two of them up behind the scenes by ethernet cable so you only have to plug the computer into one of them) and you have your classic two-decks-and-a-mixer DJ set-up, but with all the digital delights of cue points, loops, library search and so on.

It does this very, very well. The thing is built like a tank and is 100% professional grade. The platter feels perfect with 10 x higher resolution than Midi, which basically means it feels like a real turntable to use and sounds like one too. The unit has lots of advanced controls (start AND stop braking and two types of reverse, for instance) that mark it out as real pro equipment. No surprise there, with the NS7 as its blood relative.

I am sure more than one Serato Scratch user will see this and start thinking… I might be able to get into that (same with the NS7, of course). But looking back to our list above, this unit – either on its own or with a twin unit and a mixer (a task for which the Numark X5 was specifically designed) – might also suit you if:

1. You only want one digital deck

Here’s an ace up the V7’s sleeve: you can use it to control two decks on the software by hitting a switch, and there are two separate line-outs on the back for this purpose. Thus you can DJ a whole set on one unit. So you could turn up at a gig with your laptop and one of these, and happily play away (as long as you don’t forget which deck you’re controlling momentarily of course).

Another reason for only wanting one digital deck is if you have a vinyl or CDJ setup that you’re perfectly happy with at home, but want to add a digital element for versatility or just to try it out. In days not-so-long-ago, many vinyl DJs added one CDJ and kept things like this while they got used to CD DJing – why not do the same at home but with digital?

2. You want the controls to be laid out the same on both decks

As I said before, the all-in-one Numark NS7 is a bit non-standard. You pay a lot for this gear and if you’re doing so because you want digital but with everything as close to analogue as possible, you’re possibly going to want two decks laid out the same. A pair of these and a mixer of your choice gives you just that. It’s a niche need, but this is niche gear, and I bet more than one reader disliked the layout compromises on the all-in-one NS7.

3. You want independent onboard FX

These units come with control of Serato ITCH’s FX built in, which sound (on the whole) great. They’re not the most advanced or flexible, but they’re good. If you want to add a bit of spice pre-mixer to your sets, here’s your answer.

About the only practical downside, I can see is that, with one V7 capable of controlling two Serato decks, why can’t two of them control four? It seems a silly omission (Serato works fine with the Allen & Heath Xone:DX with four decks), but unfortunately at the time of writing it’s a no-can-do.

The other “downside”, if you can call it that, is more a strategic one, and one word sums it up: Pioneer. Those guys seem to be trying to create the ultimate installation equipment that can work with everything. I think their vision involves any DJ, with his music on any medium, turning up and playing on club installation equipment made by that company. Serato, Traktor, laptop, CDJ… Pioneer gear is increasingly seeming capable of controlling all of this kit. It’s not there yet but watch this space.

But I can’t see a Numark setup of, say, two V7s and an X5 – good enough technically and performance-wise though it is – appearing in any serious venue any time soon. No, this remains a niche home/mobile set-up, or maybe one for cool bars with digital resident DJs who want to use this kind of kit. I would – I think it’s great.

Whatever, though, the V7 is a thoroughbred digital deck and coupled with a Numark X5 mixer, it’s my current dream DJ setup. What’s more, I think the next months and years are going to see high-end digital DJ equipment really growing up. Can’t wait.

Do you own one or two V7s? Would you like to? Is this your dream setup too? Or do you think it’s not up to the job? Please let us know your thoughts on this (and the broader future of digital DJing) by commenting below. 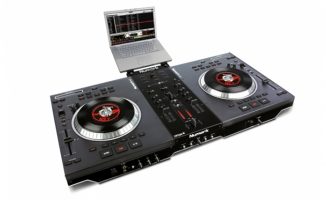 Controller Clinic #9: Should I Buy The Numark NS7?