Digital DJ Tips has seen the latest version of Traktor, Traktor Pro 2.5, as well as the hardware controller Native Instruments has built to work with it, the Traktor Kontrol F1. Native Instruments is calling it “Ableton in a DJ way”. The control surface (widely but incorrectly outed elsewhere as the Kontrol X2) is a Kontrol X1-shaped and is dominated by a four-by-four multi-backlit pad surface for launching sample clips, in a similar way to Ableton Live.

The software, meanwhile, expands on Traktor Pro 2’s sample decks to make them into fully blown remix decks. There are four sample blocks per deck, each of which can contain four samples, which crucially are colour coded to match the colours on the Kontrol K2’s clip launchpad. Each of these “remix decks” is treated by Traktor exactly the same as any other deck, meaning you can affect them globally with loops etc and also scratch and cue them just as if they were a single track.

Traktor Pro 2.5 thus brings an “Ableton Live Lite” concept right into Traktor, borrowing elements from the Serato Scratch Live / The Bridge project, but of course as it’s all in Traktor there’s no need to actually have any clip software such as Ableton.

Native Instruments’ CEO Daniel Haver told the company’s 10th US office anniversary party at its LA offices that the update has been designed to “bring the power of clip-based DJ performance with software such as Ableton right into Traktor”, and predicted that what he was calling “Traktor Remix” will radically change the way DJs perform.

Following the launch, DJ Shiftee performed a short set with the software, which had only been finished a day early by Traktor’s dev team in time for the performance.

Are you excited by this new leap for Traktor? Is having a workflow which is half DJ software, half clip-based remixing something you can see changing the way you DJ? Or are things moving too much towards production and away from the traditional skills of DJing for your liking? We’d love to hear your thoughts in the comments. 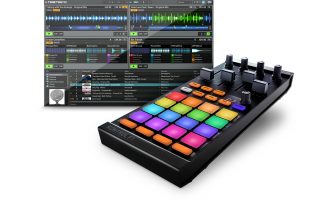