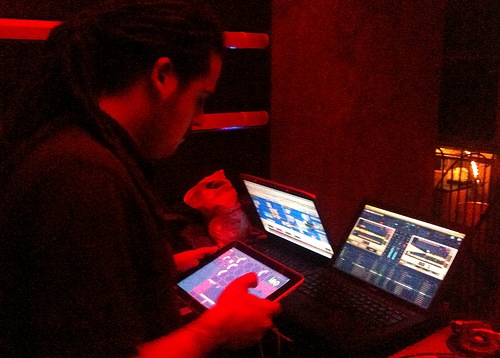 In our previous accessories article from late November last year, we featured a number of iOS DJ accessories that would have been more than welcome around many an iOS DJ’s Christmas tree.

As with most digital technology though, things move fast, and with the new iPad and a rash of new DJ software come another batch of accessories. Today we look at four of those that have most caught our attention.

IK Multimedia not only produces the iRig Mix unit we reviewed earlier, but it also make stands for iPads.

This one is useful because it can be folded down flat for easy transportation. It can be adjusted to a number of angles and the iPad rests snugly (horizontally or vertically) in the groove along the bottom of the stand. This stand also includes a detachable iRig mountable bracket for those musicians among us who want to plug in a guitar or microphone. The four rubber foot pads ensure the stand doesn’t slip around during use.

I found the iKlip Studio to be a perfect companion to my iPad when using DJ apps. I could set the angle to be shallow when using the iPad in isolation, or increase the angle for use with a USB Midi controller. So for those of us who can’t afford the luxurious Arktis stands featured in the last article these are a practical and affordable alternative.

We reviewed the AIODJ All-In-One DJ Cable last year and made some recommendations about the length of the cables. These points were taken on board and the cable has been updated, with the Pro version now available.

All audio connectors and jacks are gold plated, the cable is higher quality and the length of the USB cable has been extended to 1.5m, which means you can set your iPad up for DJing further away from the power source. The rest of the functionality provided by the cable is identical to the version we reviewed previously; it’s still the “Swiss Army knife” of cables, and only concerned with audio. If the cable could handle charging the device or Midi transport then you could use it conjunction with a USB Midi controller; give me that functionality and it’ll get the full five stars!

Stereomusik Systems produce a number of high quality audio products, including the original audio splitter cable for iOS devices, but the recent addition of the Output Booster connectors has got our attention. iOS devices have low audio output volumes, so when connecting up to a mixer you may need to raise the gain considerably.

Of course, you can use these with any audio device with a low audio output volume. With a gold plated connections and a spring loaded ground mechanism, these connectors provide a boost of an impressive 30dB.

Buy from: Stereomusik Systems on eBay

controller which we have reviewed before. It’s due for release on May 31 2012 and is likely to be priced about the same as the DJ2GO unit.

The reason I’ve listed this particular controller is that it currently works with a couple of apps with another soon to be added: Algoriddim’s djay; iDJ2Go / Deej from Inqbarna; and DJ Dex (support coming soon). Full details can be found on the iON Audio website.

Buy from: Due soon

Are there any accessories for iOS that we’ve missed? Have you got any of the above? Please let us know your thoughts in the comments. 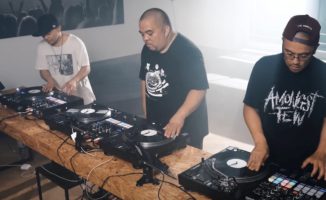